in AFRICAN ART, ART FAIR, DIGITAL, EXHIBITION, INSTALLATION, INTERVIEW, MIXED MEDIA, PERFORMANCE
Share on facebook
Share on twitter
Share on email
Share on whatsapp
ART AFRICA spoke to Emo de Medeiros in light of his upcoming solo exhibition ‘Transpositions,’ which will be on show at 50 Golborne Gallery, London, from the 5th October – 20th November 2016, with a simultaneous installation and performance of Kaleta/Kaleta taking place in a former banquing hall in London’s Notting Hill area. The installation and performance will be open to the public between the 5th – 6th October. He will also be showcasing work at 1:54 Contemporary African Art Fair, London, which opens next week. 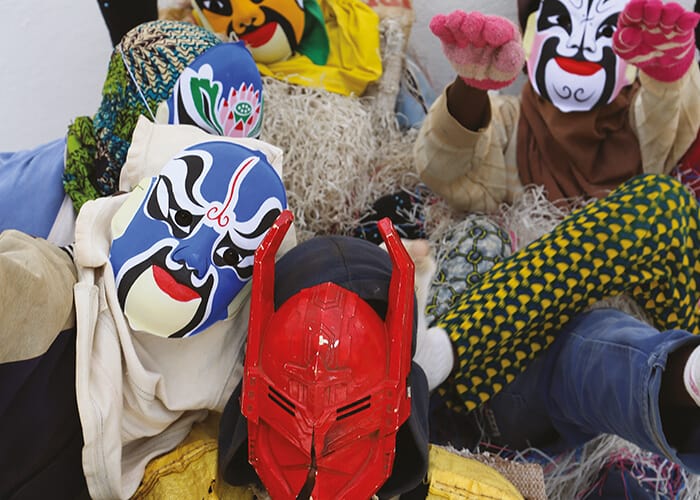 Emo de Medeiros, detail of Kaleta/Kaleta #001, 2016. Detail of photo still from video work. All images courtesy of the artist and 50 Golborne Gallery.

ART AFRICA: Please tell us about the body of work on show at 1:54?
Emo de Medeiros: There will be pieces from my series ‘Surtentures,’ ‘Vodunaut’ and Electrofetishes’, as well as pieces from my new series. Regarding the latter, I’d like them to remain a surprise for now… so that the public can experience them directly.
You have a simultaneous solo exhibition on show in London at 50 Golborne entitled ‘Transpositions.’ Where does the title for this exhibition come from, and how does the work on show relate to the work exhibited at the fair?
The title of the exhibition refers to a notion – transposition – that is extremely powerful and important, to the point of being present in semantic networks as numerous and diverse as mathematics, philosophy, chess, electronic game design, genetics, music, telecommunication, cryptography, astronautics, and magic. Transposing is about mutating, permutating, relocating, and redefining, which is the essence of my artworks, or contextures. To these dimensions, I add another one, referring to the locus and spirit in which I work: a position at the limits, at the frontiers, and resolutely transcultural; in a word, a “transposition.” As to the relationship between the work at 1:54 and the show at the gallery, the latter allows the public to go farther and deeper in depth into my universe. 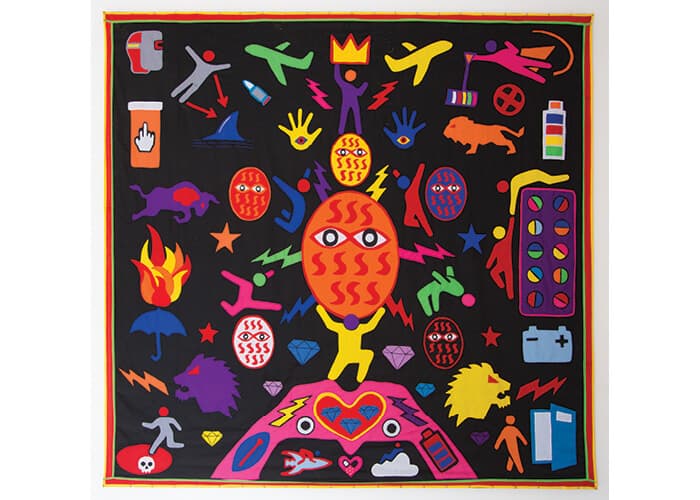 How playful is your creative process? Is there a lot of experimentation going on behind the scenes?
To be honest, it’s actually a mix of playfulness and pressure, since I must confess I’m completely obsessed by my work and its quality. To me, art is a simultaneous process of exploration and discovery of the inner and outer worlds. With every work I begin I enter a “Terra Incognita,” and a form of adventure involving suspense: in the end, is it going to come together? Will I find it interesting and, even though that may sound somewhat incongruous in today’s context, beautiful? That is also one of the reasons I work on series in which each piece is both an experiment and an exploration of a form and/or a concept. As to experimentation per se, it is very much a part of the process: my central concept is called “contexture,” and always involves, besides rhythmic repetition and as much collective participation as possible, an element of improvisation. Improvisation forces you to experiment, like in the Surrealist’s “écriture automatique,” or the jazzmen’s solos. If you listen to John Coltrane or Miles Davis’ music, beyond the masterful compositions and hyper-elaborate structures of their pieces, you will find in their improvised solos something that transcends it all. This is what I aim for.
Your work, such as the ‘Surtenture’ or ‘Electrofetish’ series, is (quite literally) embedded with meaning, each specific to the context in which the work is being shown. In this way the work takes on a life of its own. How do these ‘multiple lives’ play back into your practice?
These “multiple lives” generally play back in my practice as increments. For instance, my first ‘Electrofetish’ included a smartphone, a QR code, a telephone number, and two samples of Warhol’s voice. I was satisfied with the result, which was also a reference to Leonardo’s automats, but the collector failed to conserve the work properly and didn’t keep the phone number active, so the piece ended up not functioning as intended. So I thought about fail-safeing the technology. Besides that, as otherworldly as it was to hear Warhol’s voice coming from a statue, or prompting you, when you called the piece’s number to leave a voicemail that he would repeat, I realised that there might be an even stronger element of mystery in silence. So, in the next pieces of the series I decided to use chips that would deliver messages silently, immediately and intimately (on one’s smartphone) to each person without needing to be connected to a power source, or a telephone network. 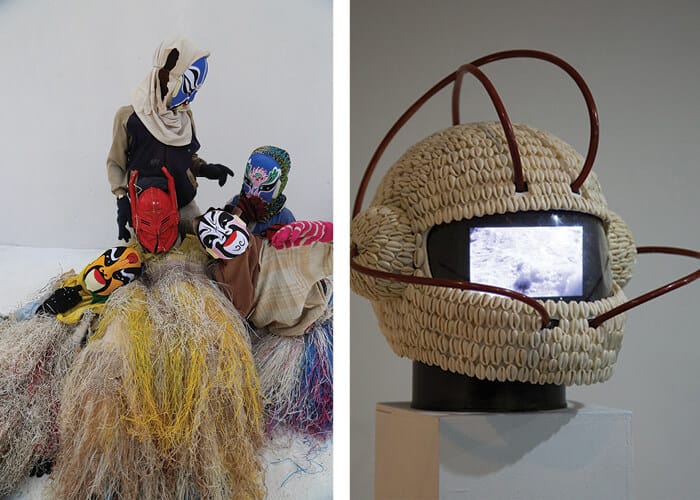 Your performance and installation Kaleta/Kaleta has been shown in various contexts. You recently re-shot this installation, and will be performing this publically between the 5th – 6th October at a private location in London. How has this work evolved through its various instantiations and what can people expect from the latest iteration?
I actually didn’t re-shoot the piece, I just added new material. I wanted to have a tighter, more systematic and visually rhythmic element to it. In the new shooting, I decided to use Chinese opera masks, almost exclusively, thus increasing the transcultural element, to which I added two masks from the Venetian tradition, and two robotic masks, for texture and counterpoint. Besides that, in the first shooting there was a major blunder by one of my assistants, resulting in the loss of all the photographic material. Needless to say I felt extremely frustrated, all the more so that from its inception, Kaleta/Kaleta was a multidimensional piece involving photography. This time, there was no blunder, and the photographs are everything I wished for. As to the evolution of the piece, it has grown in richness and complexity with each instantiation. For instance, I started to use the multiple screens to show diptychs and triptychs in motion. And what people can expect from the next iteration, if everything goes as planned, is an experience they will never forget.
Emo de Medeiros’ solo exhibition ‘Transpositions’ will be on show at 50 Golborne Gallery, London, from the 5th October – 20th November 2016, with a simultaneous installation and performance of Kaleta/Kaleta taking place in a former banquing hall in London’s Notting Hill area. The installation and performance will be open to the public between the 5th – 6th October.
This interview was first published in the September 2016 edition of ART AFRICA magazine, entitled ‘BEYOND FAIR.’