in AFRICAN ART, ART FAIR, CONTEMPORARY ART, INTERVIEW, PAINTING
Share on facebook
Share on twitter
Share on email
Share on whatsapp
ART AFRICA spoke to Paul Ndema in the lead up to 1:54 Contemporary African Art Fair to discuss the role of the fair in elevating the profile of contemporary African art, and some of the themes inherent in his recent body of work. 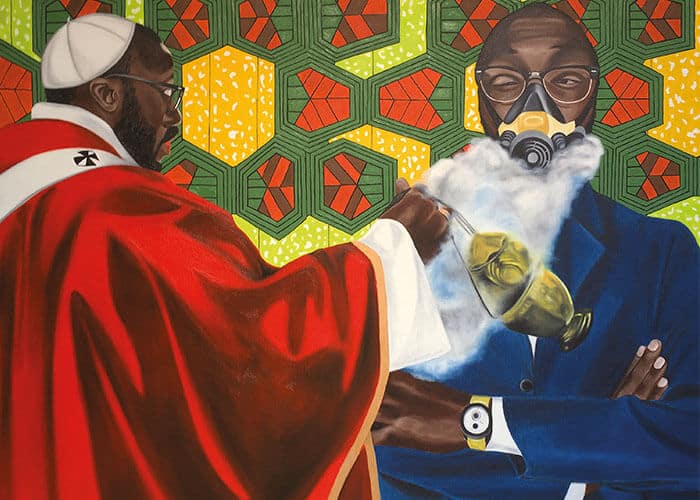 Paul Ndema, detail of Suffocating the Devil, 2016. Oil on canvas, 100 x 100 cm. Image courtesy of the artist and NH Contemporary

ART AFRICA: You are participating on numerous ‘African focused’ fairs this year. What is your opinion on the proliferation of these fairs and what role has 1:54 played in elevating the profile of contemporary art from Africa?
Paul Ndema: The fairs have done well to increase the exposure of artists and their work. 1:54 has placed art from Africa on a higher stage and increased interest in the artists, their work and stories. It has also created another avenue for galleries, curators and collectors to make relevant connections.
The word ‘syncretism’ has been used to describe your work. As a concept, how does this affect the way you approach the making of your work and can you tell us a little more about your process?
After some exposure to different religions, I have noticed that there is hypocrisy, male chauvinism and intolerance towards homosexuality in some of these religions and particularly in Christianity. It’s from the above that I try to execute paintings that further expose the flaws in Christianity and try to downplay the influence of the white man on Christianity. 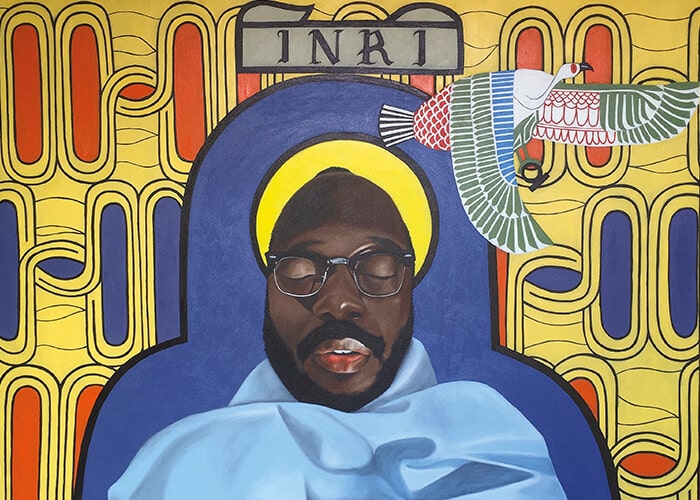 Paul Ndema, detail of King of the Underground, 2016. Oil on canvas, 100 x 100 cm. Image courtesy of the artist and NH Contemporary

Your recent paintings are characterised by satirical interpretations of Christianity in Uganda. What are some of the specific issues you are touching on with this body of work?
Some of the specific issues I’m touching on are homosexuality, womens’ role in the leadership of the church and infidelity.
Presented by Circle Art Gallery, Paul Ndema’s work will be on show at 1:54 Contemporary African Art Fair, London, between the 6th – 9th October 2016.
This interview was first published in the September 2016 edition of ART AFRICA magazine, entitled ‘BEYOND FAIR.’