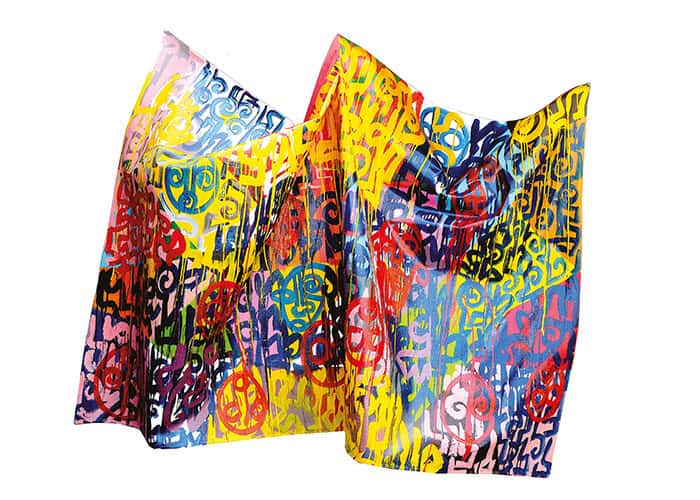 Victor Ehikhamenor, The Gods Will Sing And The People Will Dance, 2016. Mixed media on canvas, 62.5 x 100 cm. All images courtesy of the artist and the Gallery of African Art (GAFRA).

ART AFRICA: Your work is rooted in folklore, storytelling. As an artist who works in both Nigeria and Maryland, do these simultaneous histories ever collide? You’ve also noted that your muse is more active whilst in Nigeria. Could you elaborate on this?

Victor Ehikhamenor: As an artist who draws inspiration and influence from memory and history, Nigeria for me is the living fountain of the material that fuels my work and the fecundity of the space is not comparable to anywhere else in the world. The vibrancy, the spirit, the energy and the challenges that I encounter while in Nigeria are very instrumental to my works – to simply put it, I am closer to the source of the river whose water I drink. 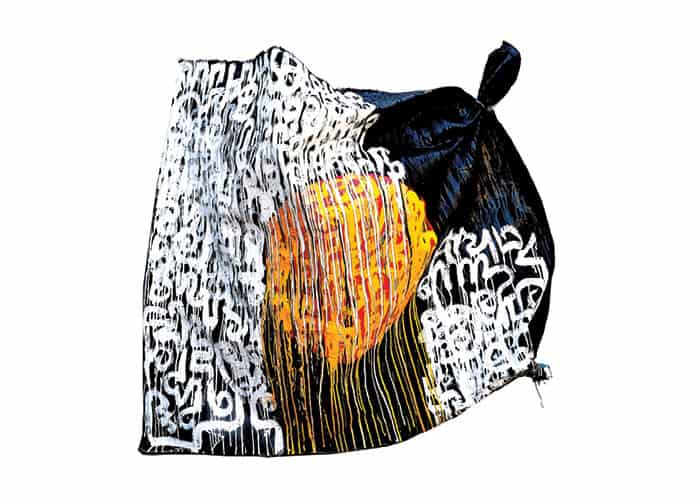 As a writer and artist, I have to constantly be conscious of both art forms and how they interact with each other. My use of visual symbols and motifs with origin from ancient writing systems are also very subliminal in my body of works. So, in a sense, what was text hundreds of years ago has evolved to visuals. However, in a more direct way, I have recently started interrogating actual literary works by major African writers by reimagining and reviewing their texts as drawings and paintings. Earlier in the year while at a residency at Nirox Foundation Sculpture Park in the Cradle of Humankind in the outskirt of Johannesburg, I did five large drawings on canvas, visually narrating some of the crucial events in A Walk In The Night, a novella by the late South African writer Alex La Guma. A Walk in The Night is about the class, race, relationship and violence in South Africa between blacks, coloured and whites in the 60s. And I am currently re-reading and researching Christopher Okigbo’s poems, which is the next body of text I want to interpret visually. These are by no means book illustrations; they are my own re-imagination of the state of mind of the writers. I am fictionalising the visceral mental positioning during the creation of the texts. These kinds of cross currents are what I refer to as visual/textual mating.

To what extent do your titles function as entry points into your work?
They are the keyholes that let viewers insert their own objective keys and open the door that leads to my phantasmagoria world. Sometimes the messages I want to pass across are not in the painting but in the titles of the works; figurative abstractionist titles are very sacrosanct to me. You have to also remember that in my village, the names parents give their children mean a lot. Through a child’s name you can tell the history surrounding the child’s birth and the welfare or aspiration of the parents. 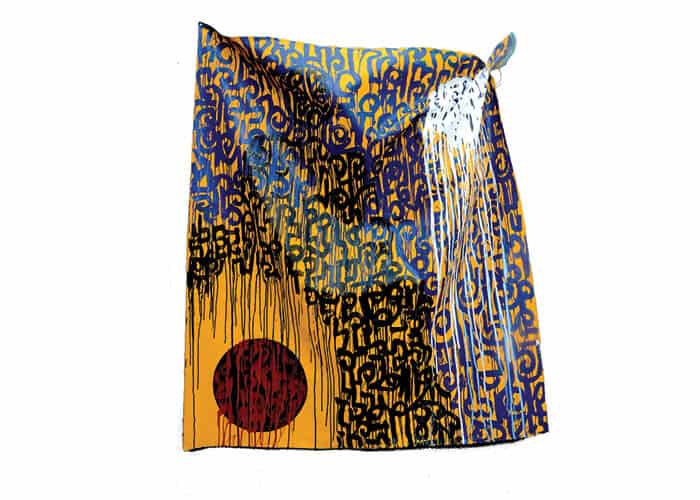 Your approach to space and composition is very interesting. There is this constant layering of narratives – a dance/fight between the figures – whether your working on a flat surface or on one of your three dimensional canvas objects. What made you decide to turn the canvases themselves into objects? To render this space physical?
Spaces are important to me and the way humans relate with both physical and metaphysical spaces are also paramount in the way I approach my work. Take for instance my installation at the 2016 Dak’Art Biennale, The Prayer Room. I imagined slave trade and the possible fact that people probably hid and prayed in the exact spot where I had the installation at Palais Du Justice because of its proximity to the ocean. I also imagined sacred places in my village, where villagers went to pray, as well as other modern religious altars and how we as humans relate with these places.
As for my exploration of the forms and shapes a folded canvas can embody, that comes from my memories of how clothes were hung in the village, be it home or in a market. A man comes from the farm, takes off his farm clothes and hangs them on a wall nail – this appears to me as a soft sculpture. The way my mother hung her beautiful Dutch Wax wrappers on the clothes line to dry are a constant memory for me when making my sculpted canvas. A dancing masquerade with explosive colours spinning around in the village square does not not look like a stretched canvas on a museum wall to me. The thieving politician with his flowing traditional dress rushing to the parliament are also a good reference for this series. These are the things I consider when exploring the sculpted canvas, which, by the way, are painted flat before they are sculpted. In other words, if stretched they still tell tales of a normal quintessential painting.
What are some of the themes explored in the work you have produced for 1:54 Contemporary African Art Fair?

This interview was first published in the September 2016 edition of ART AFRICA magazine entitled ‘BEYOND FAIR’.