A lithe figure reclines in a gold, sequined cocktail dress that reaches to her knees. But for her dress, the girl is androgynous. She is positioned like Manet’s Olympia on a bank of loam. The wet ground around her is the same brown as her skin. I am mesmerised by the roots, worming their way through the soil beneath her form. She meets your gaze with a fashionista’s rueful scowl while creepers, with tendrils and heartshaped-leaves, infiltrate the frame. 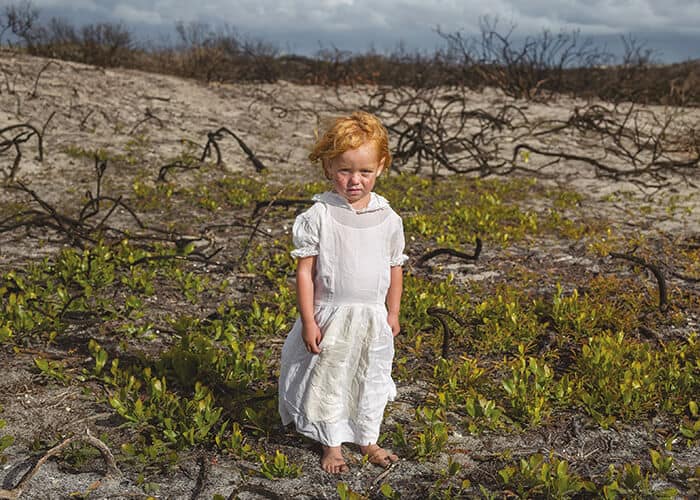 This is Portrait #7, Rwanda, 2014, one of Pieter Hugo’s thirty-three life-size portraits of “born-frees” from Rwanda and South Africa. The enormity, elevation and clarity of the photographs are overwhelming and from each gazes one or more solemn children. They are posed in nature, strikingly at odds with the yokels and strangelings of Hugo’s previous exhibition ‘Messina/Musina’ or ‘Boerseun: Portraits of young Afrikaans farm boys.’ To situate these works in Hugo’s oeuvre is to realize that he has strayed into an uncharacteristically beautiful aesthetic.

Much of his previous work documents the idiosyncrasies at the fringes of humanity. His subjects appeared to be outsiders; too familiar to entirely reject but also uncomfortably awkward and pathetic. In stark contrast, the children in ‘1994’ don’t elicit sympathy – they are a host of impervious cherubim in clothes scrounged from adult humans. In these works Hugo’s attitude towards them seems envious and aspirational. For him, they represent the relief of finally shedding the deplorable, itchy skin of the past.

In 1994, the Apartheid government relinquished power to the African National Congress. In the same year an estimated eighthundred thousand people were killed in Rwanda in a genocide that is unparalleled in the post-Holocaust world. Although the two territories endured vastly different struggles they are analogous in many ways and both represent an attempt to rebuild and resurrect. 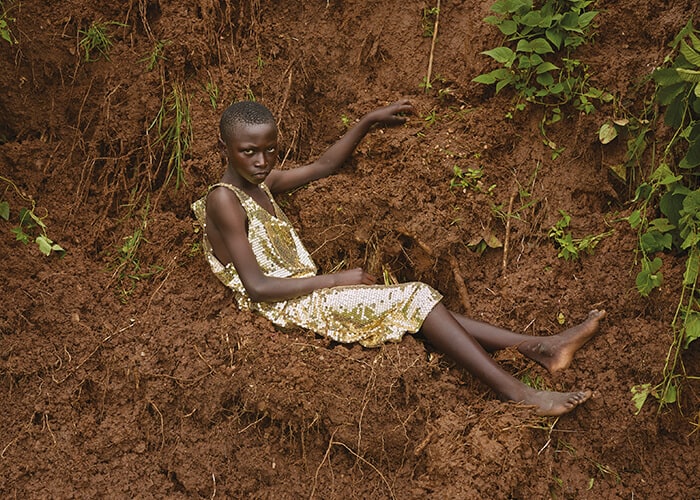 A South African native, Hugo has worked in Rwanda before, photographing victims and perpetrators of the genocide. He shot a sensitive and astutely-captioned series that showed how life continues but hurt lingers on; never forgotten, not quite forgiven, and eerie, but for the warm African sun and the jubilant Kitenge designs.

‘1994’ is less overt. It is a political exhibition by virtue of what is not there. His subjects do not know the scorched earth and the blood baths. They do not hold the cold metal of guns. Their range of understanding of violence and injustice is less than that of their parents. Hence, healing is one optimistic take-away from this exhibition. It appears that in their moments of relaxation these wise-eyed juveniles require no patronising parental supervision. However, it would be negligent not to ask to what degree Hugo’s subjects are still too vulnerable and larval to be counted as having a political bent.

Photographing children raises ethical questions because of the power asymmetry between photographer and subject. Children must assent to being photographed and the consent of a legal guardian must be acquired. Even then however, consent is often bought or acquired through an imbalance of power; creating a disparity between actual consent – the right toward self-determination – and a ‘consent’ that comes off the back of a ‘I owe you.’ Much of Hugo’s process is obscured from the gallery viewer so it is difficult to tell if his process took these factors into consideration. In a pre-emptive response to issues of exploitation and the inevitable question of identity politics, my opinion is that it is better to have the photograph – one that contains some truth, however adulterated it is by the gaze of the photographer – than to have none. 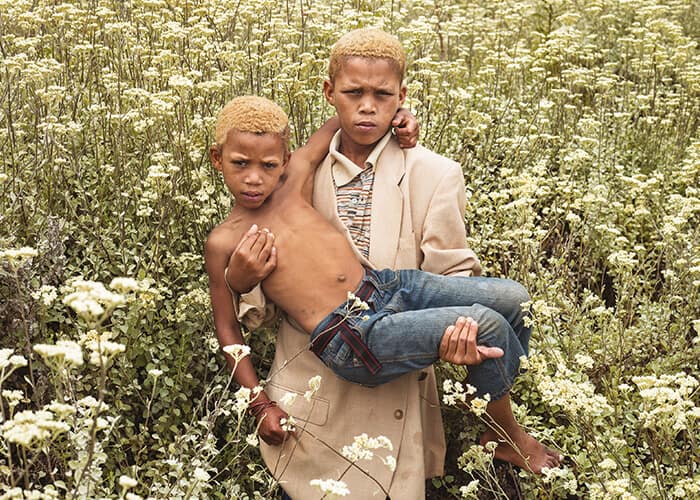 I do not believe that Hugo’s intention in this instance was to represent a political truth. ‘1994’ seems far more like the creation of an agrarian idyll than photo-journalism. For this reason, his subjects straddle the line between evidence and artist’s models. They appear un-self-conscious, but I wander through the gallery inevitably questioning the self determination of the sitters. The mystery of a poetically-positioned wrist, a lick of lipstick, an unlikely costume and a nod to the canon. The latter is particularly evident in Portrait #16, South Africa, 2016, in which two brothers with ecru-coloured skin reenact the pietà (or perhaps the photograph of Hector Pieterson) in a thicket of blossoming scrub.

‘1994’ is filled with honey-blonde fields, cool ponds and shadowy undergrowth that show nature raging quietly, inevitably and beautifully in the background. The colours are richly lit. Sunlight hits the earth head-on. It is verdant and edenic. Hugo transforms these politically post-apocalyptic places into pastoral utopias.

What happens when the evils are filed away as history? Life resumes – but there is a darkness reflected in these children that is perhaps theirs and perhaps Hugo’s.

Isabella Kuijers is a practicing artist and arts writer who contributes regularly to ArtThrob and other publications. She holds a BAFA and an English degree from Stellenbosch University.

Pieter Hugo’s ‘1994’ was on show at Stevenson Gallery, Cape Town from the 2nd June – 16th July 2016. This article was first published in the September 2016 edition of ART AFRICA magazine, entitled ‘BEYOND FAIR’.