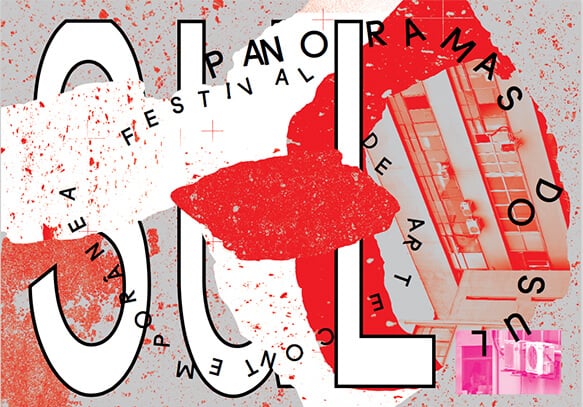 As of October 3, the city of São Paulo will be hosting debates on the cultural production of the Global South as part of the 20th Contemporary Art Festival Sesc_Videobrasil, in an edition that mirrors both comprehensively and poetically the countless crises that have lately challenged contemporary society. Besides exhibiting the selected works, the Festival will also feature performances and public programs which will jointly occupy several spaces at Sesc Pompeia up to January 2018.

For the regional director of Sesc São Paulo, Danilo Santos de Miranda, “the 20th Contemporary Art Festival Sesc_Videobrasil, with proposals by artists from different nations in the geopolitical South, lies at a crossroads where the specific meets the general. Based on this premise, Sesc presents a cultural initiative akin to experiences dedicated to casting off shackles inherited from the colonial past and imposed by a peripheral geopolitical condition.” Miranda mentions the importance of the partnership between Sesc and Associação Cultural Videobrasil, which, since the 1990s, “has enabled such intersections between local and international forces to create new nodes originating in the South.”

“In these unstable times, as narrative disputes escalate and local and global sociopolitical rearrangements are relentlessly driven by the permanent specter of crisis – whether economic, ecological or cultural – the group of selected artists brings out art’s desire to expand our worldviews, encompassing the study of life, of our origins, of the evolution of the universe and of the dynamics of social groups throughout history, as well as the invention of new ways of doing politics,” affirms Solange Farkas, chief curator of the Festival and director of Associação Cultural Videobrasil, one of the presenting entities of the event, alongside Sesc São Paulo.

“These are artistic practices that blur the boundaries between sciences and take us on a journey of the origin of history, of societies and of Earth,” adds Solange.

Also focused on the geopolitical representation of art, the 20th Festival has selected works by 50 artists from 25 countries, 15 of whom are Brazilian. They include representatives from Latin America, Africa, Asia and the Middle East. Solange Farkas is chief curator of this edition, assisted by four guest curators: Ana Pato, Beatriz Lemos and Diego Matos, from Brazil, and João Laia, from Portugal. Together, the curators analyzed approximately 3,200 works submitted by two thousand artists from 109 countries.

The Festival’s exhibition features videos, paintings, installations, sculptures, photographs, engravings and even artificial plants forming a small acclimatization garden. These diverse works reveal a multiplicity of worldviews, stemming from a society which, seeming to sense its own demise, resorts to its origins to avoid such a fate.

“The artist’s spectrum of observation of his or her surroundings varies widely in scale: from microorganisms to the realm of the cosmos, from actions in the field of micropolitics to mass mobilizations. Voices symbolically hailing from other starting points, previously relegated to the fringes, now seek to qualify a new order, distinct from the modern empire, from the great historical narratives that have bequeathed a traumatic legacy, and from the scientism of other times that have made us believe in the omnipotence of man and his technology,” point out the curators.

The artworks have been organized according to six main themes: Cosmovisions (Origins; Rites and Cosmogonies; Sciences and Cosmologies); Ecologies (Nature, Earth and Fungi; Catastrophes, Crises and New Consciousnesses); Reinvention of Culture (Techniques, Appropriations and Representations); Politics of Resistance (Urbanity, Bodies and Affections); Invisible Histories (Memory and Microhistory); and Other Modernisms (Other Spaces, Other Landscapes).

In 2017, Sesc Pompeia will host all activities related to the Festival. Previously concentrated in the venue’s Interaction Area, the exhibition will now occupy not only that space, but also the Theater Hall, the internal streets that cross the cultural facility and the Workshops. A planned Auditorium will also display the Videos Programs, exhibits featuring works that require movie theater screening.

The exhibition design for the 20th Festival was created by architect André Vainer, while the art and graphic design were conceived by Vitor César, an architect and artist with research work on notions of public space in artistic practices.

Besides the actual exhibition and the video programs, the 20th Festival’s programming includes Performances, Public Program activities (such as meetings and chats with the exhibiting artists) and Workshops, in addition to educational activities for groups and families coordinated by art educator Vera Barros. Guided tours with curators and guests are also on the agenda.

Featuring a graphic design that recreates traditional elements of encyclopedias, drawing not only texts, but also images, illustrations, maps and charts, the catalog of the 20th Festival expands the audience’s contact with the context and concepts interwoven by the selected works, inviting spectators to critically rethink the disciplines and categories that have regulated our ways of experiencing and understanding the world.

Combining art, culture, astronomy, biology, history and geography to further evidence the blurring of boundaries between art and science, the encyclopedic catalog lists, in alphabetical order, the artists and their works, interspersed with other kinds of entries, designated as “keywords,” “countries” and “regions” of origin and residence of the artists – entries that conceptualize the geopolitical South and its production.

In this 20th edition, the Festival will offer participating artists from Brazil and abroad three Acquisition Awards worth R$ 25 thousand each, for video works that will be included in the Sesc Art Collection.

The Ostrovsky Family Fund (O.F.F.), recognized for its support of progressive and independent artistic initiatives, will offer one of the selected artists an award worth R$ 25 thousand for the most innovative moving image artwork. The prize will be granted by the Festival Award Jury itself.

Five artist residency awards will also be granted, each one offered by a specific international jury from the Festival’s partner institutions. These are: Ujazdowski Castle Center for Contemporary Art, Poland; Kyoto Art Center, Japan; Goethe-Institut Residência Vila Sul, Salvador, Bahia; Wexner Center for the Arts, United States; and Pro Helvetia, Switzerland. The winning artists will be announced on October 8 in a ceremony at the Sesc Pompeia Theater.

This year, the artist Flávia Ribeiro was invited to create the trophy for the award-winning artists of the 20th Contemporary Art Festival. In her view, the piece she has conceived synthesizes the Festival’s ubiquitous cultural diversity. In this edition, the trophy takes on the form of small bird made of gold plated brass and velvet. “Birds migrate, often flying between countries over long distances. I relate that to the fact that the Festival welcomes works and artists from various parts of the world, moving back and forth between such diverse cultures,” says Flavia.

An artist whose work includes research in the fields of sculpture, engraving and artists’ books, Flávia draws mainly on drawing as her creative inspiration. She views this specific technical language as a means to elaborate issues within her work process.

With the creation of the trophy for the Festival’s 20th edition, she joins the select group of artists who have conceived this piece in previous editions, such as Efrain Almeida, Tunga, Rosângela Rennó, Luiz Zerbini and Erika Verzutti, among others.

Solange Oliveira Farkas is a curator and director of Associação Cultural Videobrasil. She created the Contemporary Art Festival Sesc_Videobrasil in 1983 and was director and chief curator of the Bahia Museum of Modern Art from 2007 to 2010. She took part as guest curator of the 10th Charjah Biennial (United Arab Emirates, 2011), 16th Cerveira Biennial (Portugal, 2011), 5th Videozone – International Video Art Biennial (Israel, 2010), FUSO – Videoarte Annual Exhibition (Portugal, 2011-2014 and 2017) and 6th Jakarta International Video Festival (Indonesia, 2013). She is a member of the Prince Claus Fund Award Committee 2017 and of the advisory board of the Pivô art venue in São Paulo. In 2017 she received the Montblanc Arts Patronage Award, a prize awarded by the Swiss foundation to professionals with outstanding background and experience in supporting the development of diverse artistic and cultural expressions.

Ana Pato is a curator and researcher with a doctorate from the School of Architecture and Urbanism of the University of São Paulo (FAU-USP). She was chief curator of the 3rd Bahia Biennial (2014) and project director of Associação Cultural Videobrasil (2000-2012). She is the author of the book Literatura Expandida: arquivo e citação na obra de Dominique Gonzalez-Foerster (2012).

Beatriz Lemos is a curator specialized in arts and digital networks with a master’s degree in Social History of Culture from the Pontifical Catholic University of Rio de Janeiro (PUC-RJ). She is the coordinator of the Sismos Editorial publishing imprint and creator of the Lastro research platform. In 2015-2016 she took part in the Visiting Curator program of the Parque Lage School of Visual Arts.

Diego Matos is a researcher, curator and professor with a master’s degree and doctorate from the School of Architecture and Urbanism of the University of São Paulo (FAU-USP). He was assistant curator at the 29th São Paulo Biennial (2010) and 18th Contemporary Art Festival Sesc_Videobrasil (2013). In 2014-2016 he coordinated the Archive and Research Center of Associação Cultural Videobrasil.

João Laia is a curator and writer. He has done curatorial work for institutions such as Moderna Museet, Stockholm; Chiado National Museum of Contemporary Art, Lisbon; Videoex, Zurique; Delfina Foundation and Whitechapel Gallery, both in London; and Parque Lage, Rio de Janeiro. He contributes regularly to international publications such as Frieze, Mousse, Flash Art, Terremoto and Público.

Created in 1983 by Solange Farkas, who has served as chief curator since its inception, the Festival has been produced in partnership with Sesc São Paulo since 1992, enabling its expansion and internationalization. At that moment the Festival’s curatorship defined its focus on the geopolitical South, selecting artists exclusively from this region and addressing its diverse and complex contexts.

Over the years, the Festival has established itself as diversified and multiple platform geared towards disseminating, supporting and reflecting on the artistic production of the global South, which includes Latin America, the Caribbean, Africa, the Middle East, Oceania and a few countries in Europe and Asia.

The partnership between Sesc São Paulo and Videobrasil also enables the Festival to travel to other Brazilian cities, besides publishing works on culture and contemporary art.