in News Articles 2013
Share on facebook
Share on twitter
Share on email
Share on whatsapp
“In the 1970s a self-taught Congolese artist named Tshibumba Kanda Matulu, from Lubumbashi in the south of what was then Zaire, began to paint a history of his country;” Liese Van Der Watt provides her perspective on the exhibition ‘53 Echoes of Zaire: Popular Painting from Lubumbashi, DRC,’ which is showing at the Sulger-Buel Lovell gallery in London from 27 May – 12 September 2015.
The exhibition is curated by Salimata Diop, Head of Programme at the Africa Centre, and unveils a collection of fifty three works acquired by the late Prof. Victor Bol, all originating from the early 1970s’Lubumbashi, created by five artists from DRC – T. Kalema, C. Mutombo, B. Ilunga, Ndaie, and Tshibumba Kanda Matulu. 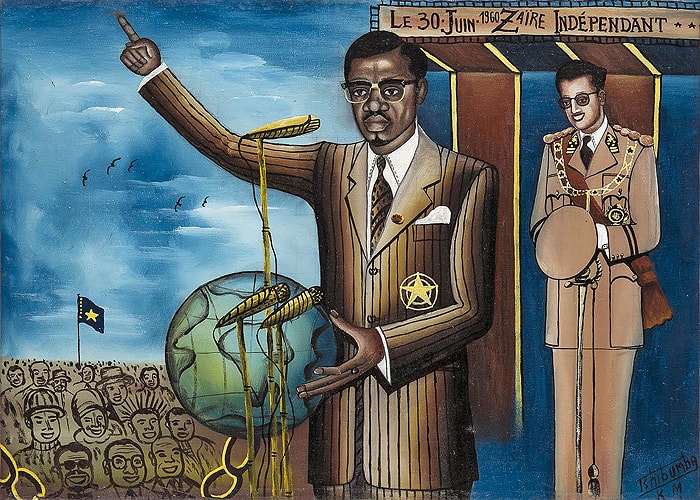 Tshibumba Kanda-Matulu, LE 30 JUIN 1960, ZAÏRE INDÉPENDANT
In the 1970s a self-taught Congolese artist named Tshibumba Kanda Matulu, from Lubumbashi in the south of what was then Zaire, began to paint a history of his country. He was sponsored and encouraged in his efforts by a visiting anthropologist, Johannes Fabian, to whom he delivered some of these works, together with an oral narrative. In a book about this collaboration, titled ‘Remembering the Present’ (1996), and containing 100 of these paintings, Fabian comments that Matulu’s history “is often amusing, shocking, incredible, and plainly erroneous.”
Whether these paintings are factually true or not is beside the point, because what is very clear from a remarkable exhibition that opened recently at Gallery Sulger-Buel Lovell in London is that history is never really a matter of facts, but of interpretation, memory and politics.  The exhibition, curated by Salamita Diop of the African Centre, shows fifty-three history paintings by five Congolese artists: Louis Kalema, C. Mutombo, B. Ilunga, Ndaie, and Tshibumba Kanda Matulu. Very little biographical information about these artists is known and none of them could be found in the lead up to this exhibition – it is even unclear whether or not they are still alive.  Efforts to reach Kanda Matulu – by far the most proficient of the group – have been unsuccessful; his last works are dated 1982/3. The collection, now up for sale, belongs to Belgian photographer Etienne Bol and is inherited from his late father Victor Bol who acquired it when they spent time in Zaire in the 1970s.  Fabian mentions that some of his expatriate colleagues also acquired shorter series of history paintings and one can only surmise that Victor Bol was one such colleague. 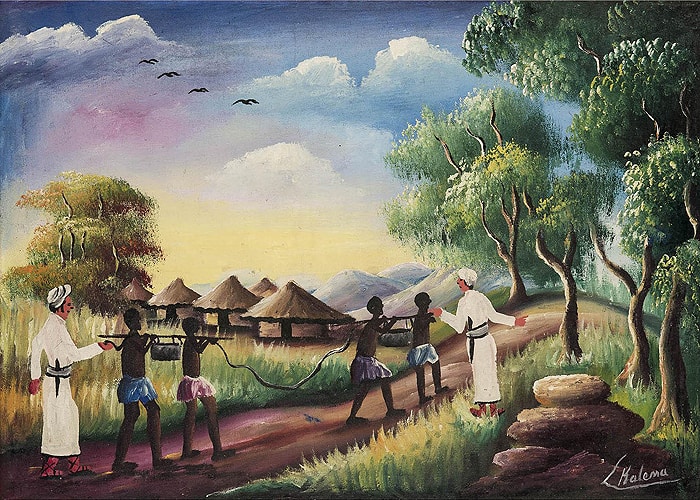 T. Kalema, Untitled
All of the artists are self-taught and the exhibition shows a series of works all executed in a style similar to what is sometimes called the Zaire School of Popular Painting. The most famous of this so-called school is probably Cheri Samba, who shot to fame after he was included in the ‘Magiciens de la Terre’ show at the Pompidou in Paris in 1989. These works are often painted on flour sack rather than canvas, using a limited palette of poster paints and thick brushes. They are often richly annotated, with the obvious intention of educating and informing the viewer. But whereas Samba and his colleagues from Kinshasa tend to record everyday events, the works on the current show are all from painters around Lubumbashi in the south with a focus on historical and political topics. This is probably as much the result of the collector’s keen eye as anything else – the catalogue tells us that these works were made for a local audience and were mostly sold to local people, so one may surmise that these artists probably also painted genre paintings for a local clientele.
‘Echoes of Zaire’ is organised around five themes representing Belgian colonisation, the mines around Shaba (now Katanga), the independence of Zaire, post-independent moments of conflict and the pre-colonial past.  Clearly, these painters are imaging a shared system of memory – under the heading “Congo Belge,” the same image crops up again and again of a white official in a white safari-style uniform overseeing a black uniformed man, whip in hand, flogging a black subject lying on the ground in front of him.  Often women in traditional dress are onlookers, and in quite a few works black subjects have chains around their necks.  These are images of such horrific dimensions that they are ingrained in the popular imagination; memory becomes a peoples’ history. 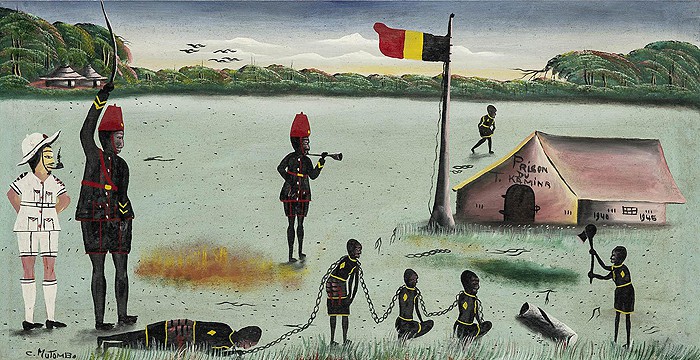 C. Mutombo, Congo Belge
Unfortunately the catalogue does not give much information about the individual paintings – we are left having to assume the importance of events without knowing exactly what they refer to.  One such incident is the beheading of M’siri.  Clearly significant as various artists have depicted it, it refers to the King of Katanga who was first killed and then beheaded by King Leopold’s army in 1891.  The exact details surrounding this event aren’t precise, but it is unambiguous that this episode is an important element in the popular imagination about colonial occupation and resistance.
It is apparent that these works are meant to implant a narrative into the vacuum left by official versions of history that circulated at the time.  They are intended to educate, document, memorialise and to politicise; in other words, they stand testimony to a history too willingly forgotten.  For this reason – and many others to do with the cohesion of the works – one would hope that the collection is sold to an institution accessible to the public, because this is a powerful document that needs to be seen in its entirety.
Liese Van Der Watt is a South African art historian based in London.