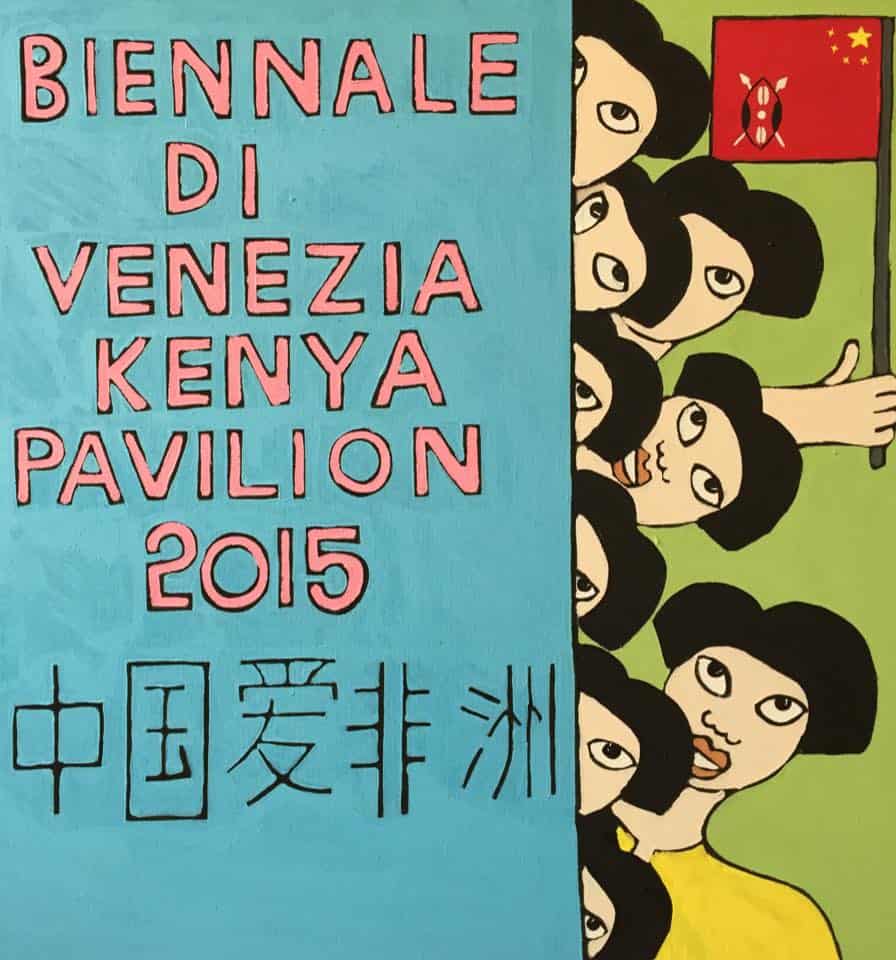 ABOVE: Michael Soi, Shame in Venice 2 (2015) Acrylic mixed media canvas 100 x 100 cm. Image courtesy of the artist.
The highly anticipated Venice Biennale will return for the 56th time on 9 May 2015. Nigerian curator Okwui Enwezor, is the first African director to head up the exhibition, titled ‘All the World’s Futures.’ In the main exhibit at the Central Pavilion, visitors can expect to see over 21 African artists, as well as official National Participations from a number of African countries, including Angola, Egypt, Kenya, Mozambique (exhibiting for the first time), Nigeria and Zimbabwe.

While there is certainly cause for celebration on the continent, some African pavilions at the Venice Biennale are not without their share of controversy. Despite there being precious little information regarding the established South African pavilion at the Biennale – the local pavilion doesn’t even appear on the official roster – a free-wheeling group of South Africa’s leading artists and patrons (championed by Roelof van Wyk) are joining forces to launch an independent performance exhibit at the 2015 Venice Biennale. This new ‘Joburg Pavilion’ is, according to the organisers, “in no way a response” to the controversy-riddled SA Pavilion, which is supposed to be funded by the country’s Department of Arts and Culture to exhibit at what is arguably the world’s most important art fair (read more about it here).

Controversy continues to mount regarding the Kenyan National Pavilion too. For the second Biennale in a row, Kenya’s pavilion has been commissioned and curated by Italians Paola Poponi and Sandro Orlandi Stagl. In a bizarre case of déjà vu from 2013, the line-up of artists selected to represent Kenya is largely Chinese. Back in 2013, only two of the twelve participating artists were Kenyan-born and this year the only ethnic Kenyan, Yvonne Amolo, lives in Switzerland and has no connection to the contemporary Kenyan art scene. The other ‘Kenyan’ (by citizenship only) is 72-year-old Italian-born painter, sculptor and real estate magnate, Armando Tanzini.

Tanzini has managed to find himself at the heart of this controversy, as he is the only artist whose work has appeared at both 2013 and 2015 Kenyan Pavilions.

In response to this, a petition entitled ‘Renounce Kenya’s fraudulent Representation at 56 Venice Biennial 2015 & commit to support the realisation of a national pavilion in 2017’ has been created. In a letter addressed to the Government of Kenya’s Ministry of Sports, Culture and the Arts, the petitioners write, “a group of well connected persons, who lack neither the intellectual nor creative capacity to represent Kenya’s contemporary art to the international arena, are posturing to the world as the Kenyan Pavilion at the 56th Venice Biennial in Italy.”

The controversial Kenyan roster – including contemporary artists such as Qin Feng, Shi Jinsong, Li Zhanyang, Lan Zheng Hui and Li Gang – has been received with indignation by Kenyan bloggers, artists and those invested in the African contemporary arts community.

A number of well-regarded voices in the African arts community have raised their voice on the matter. ARTsouthAFRICA has gathered a few of these opinions:

Novelist Binyavanga Wainaina says, “That this parody could happen two years ago was already far from excusable;” that it would happen a second time, without government comment, he says, is “farcical.”

Arts writer Wennt Teo described the 2013 Kenyan pavilion as “a frightening manifestation of neo-colonialism vulgarly presented as multiculturalism” in an article on the topic written for The Art Newspaper.

“The Shame In Venice is all about misrepresentation and fraud, flying the red green and black… Kenyan flag in a pavilion full of Chinese artists. For those who don’t know, Kenya has a lot of great contemporary artists who can represent Kenya… The likes of Wangechi Mutu, Naomi Wanjiku Gakunga… Peterson Kamwathi, Paul Onditi, Richard Kimathi, Jimmy Ogonga, Jim Chuchu… We can go on and on. [The] Kenyan pavilion is as phony as a 3 dollar bill,” Kenyan artist Michael Soi says about his satirical artwork, The Shame in Venice, which he created to draw attention to the controversy.

“The [2013] Kenya Pavilion was shambolic – full of Chinese and Italian artists with some [Kenyan artists] in a dark room… A monumental embarrassment to the country and to the continent that should not [have been] allowed to happen again. It completely undermined and misrepresented the wonderful work that is coming out of the country. That it would happen again this year is totally frightening,” says Olabisi Silva

And by complete coincidence (and somewhat ironically), Okwui Enwezor himself asks in the Exhibition’s introductory text: “What material, symbolic or aesthetic, political or social acts will be produced in this dialectical field of references?”

And that is the question indeed.