ART AFRICA: What does Algeria’s participation in the Venice Biennale represent for you?

Amina Zoubir: Since its independence in 1962, Algeria has been absent from major international cultural events. Algeria – a major African country – alongside Ghana, Madagascar, Malaysia, and Pakistan, deserve the opportunity this year to present their first pavilion at the Venice Biennale. It is not only a commitment for an Algerian artist to present their work in this space, but it is also a responsibility and a civic duty to honour one’s country and one’s flag at the World Cup of contemporary art. Contesting for the Golden Lion is a competition that is intellectually, aesthetically, and internationally rigorous. The aesthetic, social, and political stakes will be raised by works of art in their critical engagement with our difficulties, with the aim of reckoning with a temporal period that we consider interesting to live in. I have experienced these times and expressed this through my work as a visual artist and exhibiting at the Venice Biennale is a major achievement for the five artists and for Algeria. 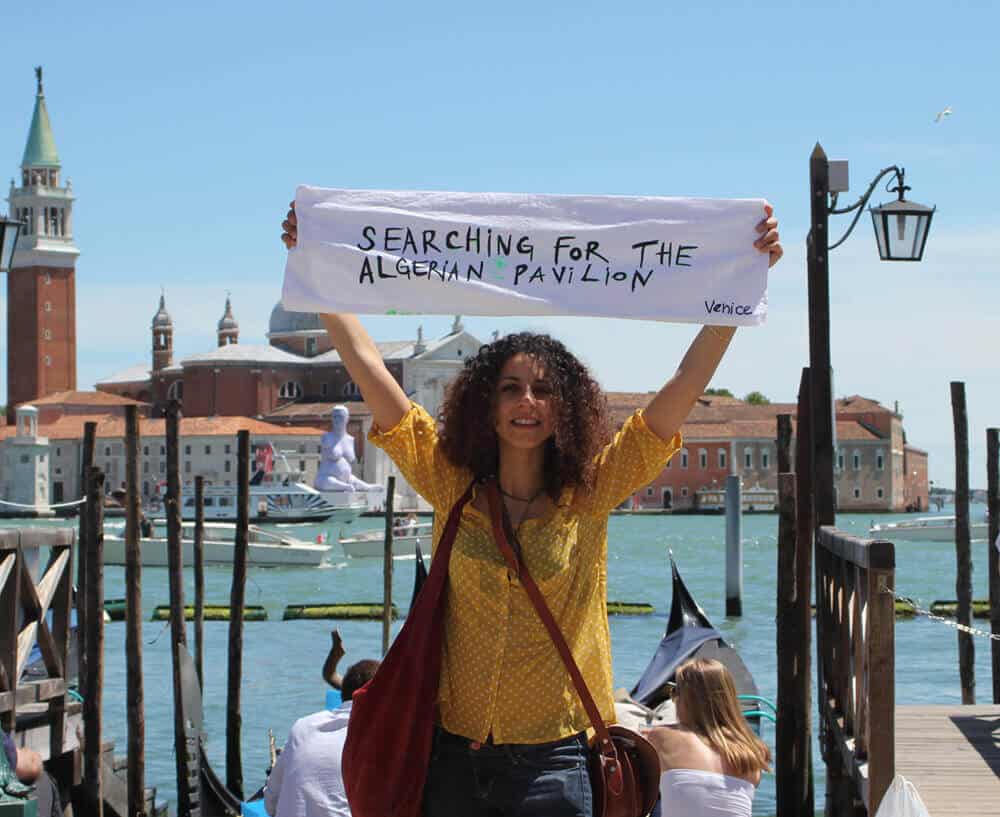 Amina Zoubir, Searching for the Algerian Pavilion, 2013. Performance during Venice Biennale. Courtesy of the artist.

I have been attending the Venice Biennale since 2011, and during each edition I have visited the various openings at the Giardini and the Arsenale, as well as national pavilions and other events. At each launch of the Venice Biennale, I orchestrated performance in the urban spaces of the city, to ask Venetians to help me look for the Algerian pavilion. The evidence of these performances from 2011, 2013, 2015, and 2017 can be found in photographs featured on my website. I have always looked for the Algerian pavilion in Venice until I decided to contribute to its birth by connecting the two relevant authorities that would help realize it.

What project will you present at the Venice Biennale and how does this project fit into your research?

I have always questioned the gaze of others, through video work related to changing experiences of embodiment in selected spaces, linking this to socio-cultural, ethno-psychic, and political contexts. My works examine social and historical issues from poetry and myths formulated in the Maghreb in North Africa. It is essential to understand the context you are coming from to imagine where you want to go –  and to give yourself affirmation of your existence. My project is not a materialist work, my project supports critical thought pertaining to what we are in the world – and how we as African artists will come to exist in the field of contemporary art. This is the main objective of curator and writer Simon Njami, with whom I worked on the exhibition ‘Afriques Capitales’ in 2017 at the Gare Saint Sauveur, Lille in France and with the exhibition African Metropolis in 2018 at the MAXXI Museum in Rome, Italy. As he said in Frieze Magazine following the passing of Okwui Enwezor, it is about placing “African artists on all global platforms and to build a set of critical tools that would allow them to be understood for what they were and not what the world wanted them to be”. I will also respond to you with the thinking of my mentors Okwui Enwezor and Olabisi Silva – God bless their souls, they left us too early to complete their fight which I intend to honour. Their challenge was to deconstruct the Western gaze and to dismantle preconceived discourses about art, not only in Africa but in the art world in general. 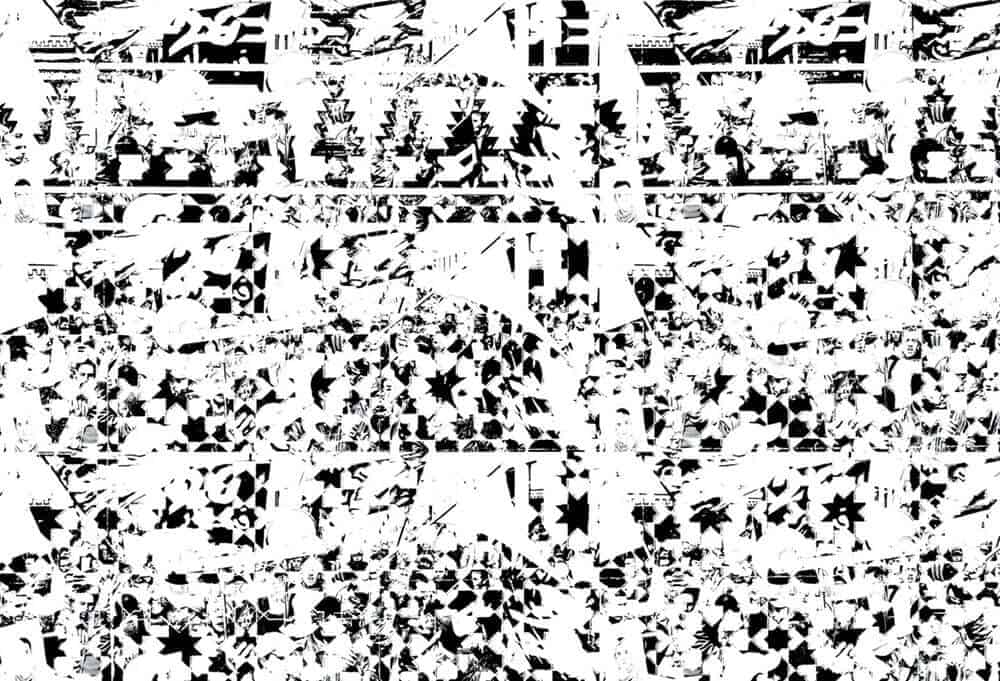 The tendency to postpone to the following day the crucial decisions of self-fulfilment and radiance, to have an attitude to dither and to wait voluntarily, all are aspects of the ambient inertia inviting us to reflect on the action that is needed to determine how to make the development and blooming of artists in their society possible. These artists do not get up early until they have to, though often their nights are sleepless. They wake up slowly, however, their relevant action illuminates the darkness of human stupidity without ever leaving us indifferent and forgetful. Does this make of them artists unable to be present in contemporaneity? In 1974, I discovered a correspondence from Karl Marx addressed to Arnold Ruge in 1843, one sentence served as a leitmotiv throughout my career « Given that it is not for us to forge a time that is worth all the time in the future, it is all the more certain that what we must do for the present is a critical assessment of all that is, ruthless in the sense that our critics should not fear their own results or conflict with established powers. » Given the many questions to discuss through their work, these artists have a real ability to isolate themselves, to hide from trends the better to grasp scholarly arguments and the meaning of blinding light, or have they kept hidden in the shadow, sheltered from the illumination that would make them shine like a celestial body? Why must they take so much time to react when, for them, it is a question of showing themselves to the light? Do they imagine that they will always have enough time and momentum to jump into the glow, to go beyond the darkening border in order shine once again through their creation of luminous artefacts?

Do these artists persevere to invent their own illumination, as well as to invent the time and the actions necessary to transcend the immobility and inertia that has invaded their cohort and the world around them, which inhabits them and embraces them the way it does a chrysalis ready to hatch? The concept of resilience, defined by neuropsychiatrist Boris Cyrulnik, refers to the resistance that allows individuals affected by trauma to rebuild themselves. The English word resilience comes from the Latin verb resilio, literally meaning to jump back, to bounce and resist in the face of shock and deformation. Should we believe that their bodies truly hurt, that they would bend their spines to metamorphose, and thereby transform and renew the world around them? Inertia makes of them procrastinators, as Stanford University philosopher John Perry suggests in his book The Art of Procrastination: A Guide to Effective Dawning, Lollygagging and Postponing. Nevertheless, a neophyte audience wrongly ignores them, as, despite the fact that artists are procrastinating beings, having invented fantasies to avoid doing that which paralyzes their mind and body, they are more productive and creative than others. This is what the philosopher calls structured procrastination to describe them. Is this simply the description of artists often imagined by citizens only capable of conceiving of them as so many inert creatives in the world of the visual arts? Yet, it is these artists who enlighten citizens by their perception and their aesthetic invention of form and of colour, thus unfolding the vision with which they confront the world, offering the luminous brilliant Algerian pavilion to us only after the process of chrysalis.

As far as we are concerned, are our artists the creative protagonists of their society and their time? Should they be considered uncommon citizens? This is a chance to illuminate our artists in center stage, in the spotlight, because they can lend an impetus so sorely missed over these last years. They are our avant-garde, our light makers. They are acting with this genius process of resilience, beings who bring the glow to make us shine again in the darkness of the existential emptiness. It is high time for us to sparkle with our light.

The Algerian Pavillion will be on view during the 58th La Biennale di Venezia, 11th May to 24 November 2019.