A Bonnet of Gatsbys

Visual material, ideological identity, and the undefined depths of installation

ART AFRICA spoke to Katharien de Villiers on her art-making process, solo exhibition ‘A Bonnet of Gatsbys’ currently up on exhibition at SMITH, and the role of location in art. De Villiers graduated from Stellenbosch University in 2015 with a distinction in sculpture and studiowork, and went on to complete her MFA at KASK in Gent, Belgium. 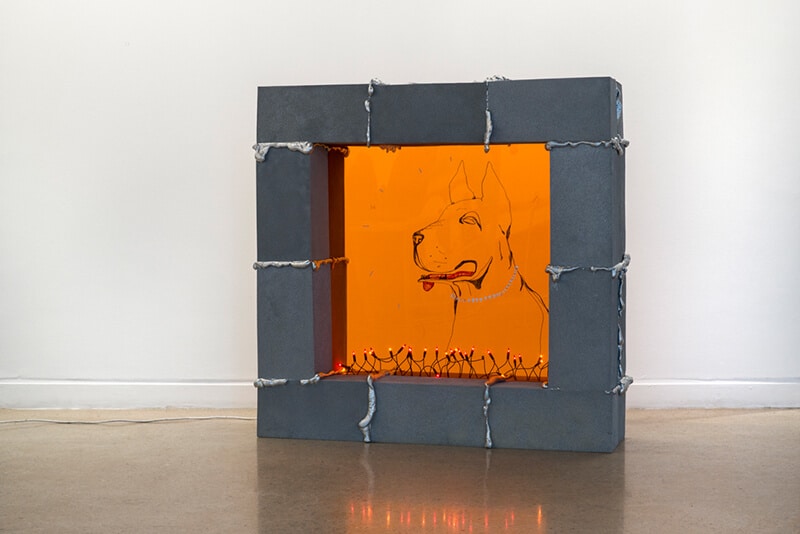 ART AFRICA: Your installation, The Carwash: a Declaration of the Independence of the Imagination and the Rights of Man to His Own Madness, was exhibited at the Cape Town Art fair earlier this year. Could you please tell us more about the thinking behind this piece?

The Carwash was created as an interactive, sculptural piece I first thought of at the 2015 Brussels Art Fair. It was the first time I saw art being consumed and experienced on such an extreme level. I wanted to create a work which can be experienced individually by the hoards – a system that attempts to construct a ritual that is specific and appropriate to a mass society brought about by advanced industrialisation.

It is a human-appropriated carwash which activated the entire stall as a space to move through rather than passively look at. A space to be experienced rather than contemplated.

In The Carwash there is only forward. Experiences leading to more. Forever. Its architectural conception incorporates essential features of a current social formation: mass population, individualisation, constant movement and the increasing involvement of consumers in the process of production. 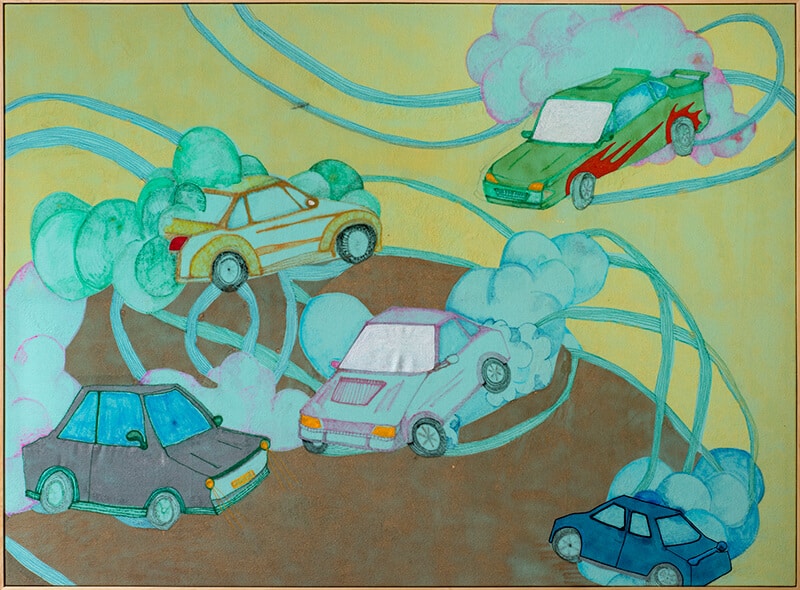 Fellas, not cause all you can steer that dont mean all you can drive boy, 2017. Mixed media on synthetic fabric, 156 x 213 cm. Image courtesy of SMITH.

‘A Bonnet of Gatsbys’ will be your second solo exhibition – now based in Cape Town, would you say that your work reflects the society that you’re based in at the time of art-making? Did your time in Gent, Belgium, influence the work made for your first solo show, ‘The Palace of Illness in Beauty’?

Absolutely. My practice is based on a personal archive of experience and acquired information, with my immediate surroundings serving as the forever-feeding artery. Having said that, I believe it is important to note that it will always be an exploration of my immediate surroundings in relation to myself – my practice then becomes an accumulation of personal experiences, projected into an exhibition space where new relations can come into play in their own turn. 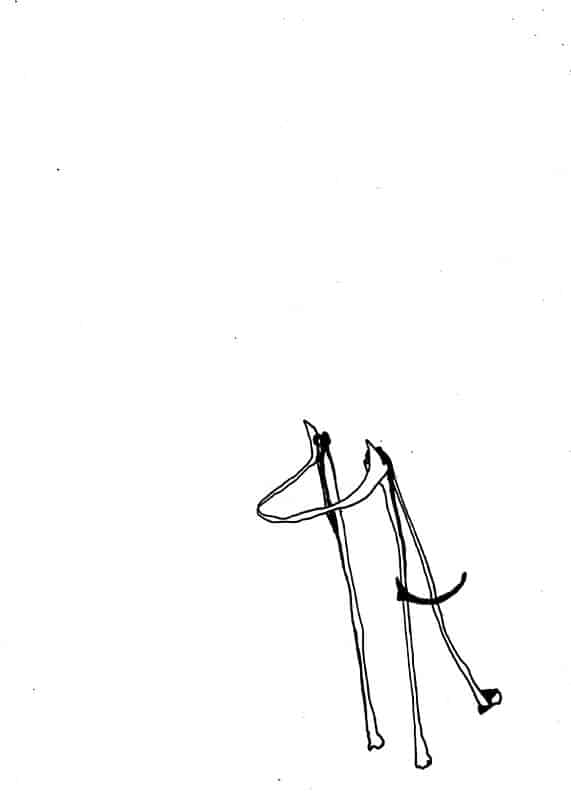 ‘A Bonnet of Gatsbys’ loosely documents your various experiences in and around the “unfamiliar territory of peri-urban ghettos” on the outskirts of Cape Town. Could you please elaborate on these experiences, as well as how you came to the exhibition title?

“Experiences” might be the wrong word. ‘A Bonnet of Gatsbys’ is the product of a selection of visual material from a Cape Town based archive. The imagery ranges from a photograph of my grandfather to a painting of a renowned hitman – myself being the catalyst. What is important is the ‘high-end’ context that the images are placed in. The gallery serves as a legitimization of Cape Town-based cultural elements often frowned upon, but which in fact form a crucial part of the city’s spatial, cultural and ideological identity.

The exhibition title came to me by happy chance – I was listening to Goodhope fm one morning, and the host had asked listeners to call in with proposals for a collective noun for Gatsbys. “A bonnet…” was just too good to be true. 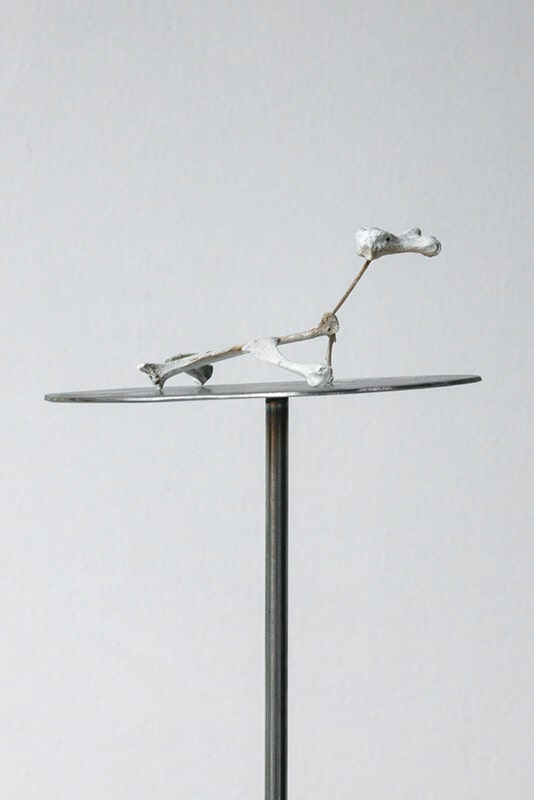 You work across sculpture, painting, video and fabric works in challenging perceptions – what perceptions exactly have you set out to confront, and why have you chosen these numerous mediums to do so?

Different thoughts want to manifest in different forms. Partially due to my lack of discipline in one specific material, my practice has stemmed into the undefined depths of installation. The multiple materials serve as sensory and visual stimulus, but is also a means of initiating dialogue between works and connecting dots for the viewer.

In my process I have found that in order to transform an archive into objects one must be able to break, dislocate and unhinge so that only parts of it is remembered, irrespective of their original relationship with the whole. The body of work is not aimed at displaying one central idea; it should not reveal a coherent philosophy of composition. It lives on as rickety re-assemblages. The numerous materials used speak of the multitude of thoughts the viewer is confronted with. 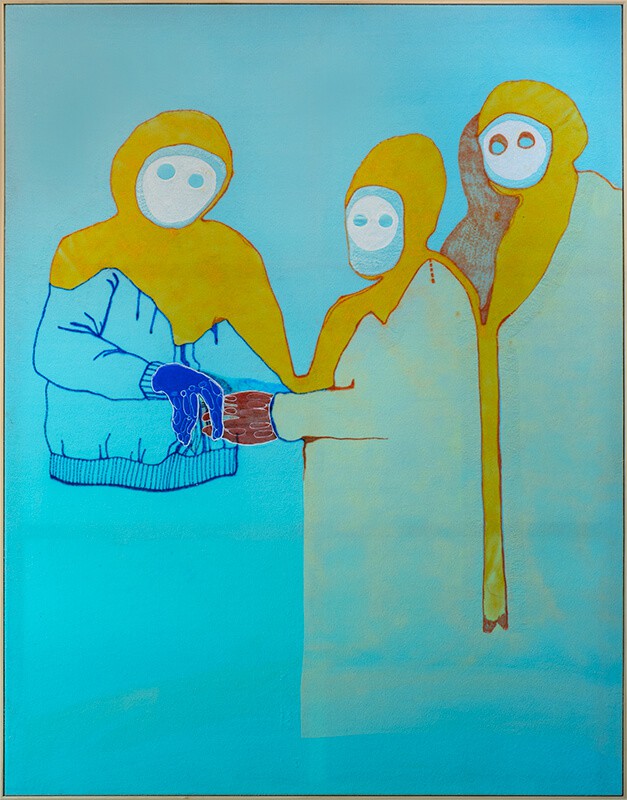 You have said that art appreciation in South Africa is strongly linked to status – having said this, what are your thoughts around the opening of Zeitz MOCAA? And what do you hope to see in its inevitable influence over art appreciation and status?

The opening of a space like Zeitz MOCAA is an incredibly exciting thing and entirely in a field of its own. The first of its kind in Africa, Zeitz MOCAA launches a new era, rocketing us into the international playing field. I look forward to this much anticipated and discussed happening with great expectations. Money talks and it can make wonderful things happen when used wisely.

FEATURED IMAGE: Detail of poster for ‘Bonnet of Gatsby’s’. Image courtesy of SMITH.