‘A Game of Mirrors’ by Farid Zahi

‘CODE’ at The Mojo Gallery (Dubai) juxtaposes the work of Cheikhou Ba (Senegal) and Serwan Baran (Iraq), two artists hailing from different continents and living across cultures. The exhibition brings forth two antagonistic views of the world. Contiguous in their underlying meaning, this results in a creative dialogue about the mystique of life. 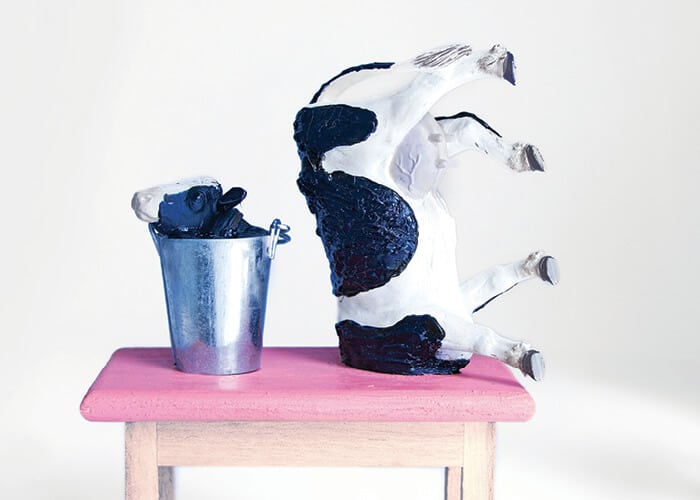 Cheikhou Ba’s sculptures are forged from children’s toys, originally manufactured in China for European children, integrating anything from cuddly toys, steel buckets and colourful buttons to form figurative assemblages. Serwan Baran’s paintings depict flattened forms in garish pigments, following the tradition of the Syrian expressionist painter Marwan Kassab-Bachi. Ba portrays three-dimensional elated characters while Baran sculpts grim figures on a white canvas. The nature of each artist’s work may seem at odds with one another, as their mediums are different, but each aesthetic process springs from the same political involvement, the same quest for meaning. 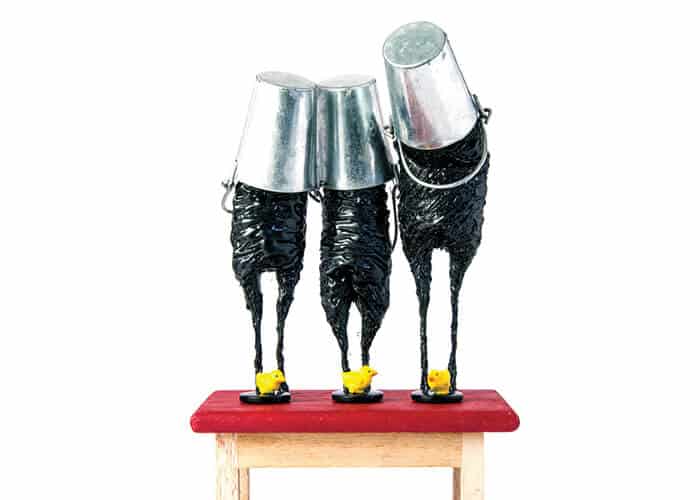 The most striking element in both artists’ work is surely the unrestrained juxtaposition of paradoxical concepts, materials, forms and textures to create meaning. The painter uses the dramatic contrast between the vivid colours and the physical distortion of his characters, whilst the sculptor unravels a phantasmagorical universe through burlesque compositions. Rooted in his blacksmithing ancestry, Ba considers his appropriation of everyday-life, disparate objects into derisive configurations, an attempt to deconstruct the world through irony and order, to reach a universal aesthetic language. The juvenile sculptures displayed in ‘CODE’ are double-edged: what seems to be naïve and comical can also be strangely terrifying. The contrast of colourful toys and dark figures is a subterfuge to the artist’s intention, as he lays down metaphysical questions through banal artefacts that he merges together. His anthropomorphic figures explore the darkness of uncertainty, the difficulty of transition and the ambiguity of the human condition. 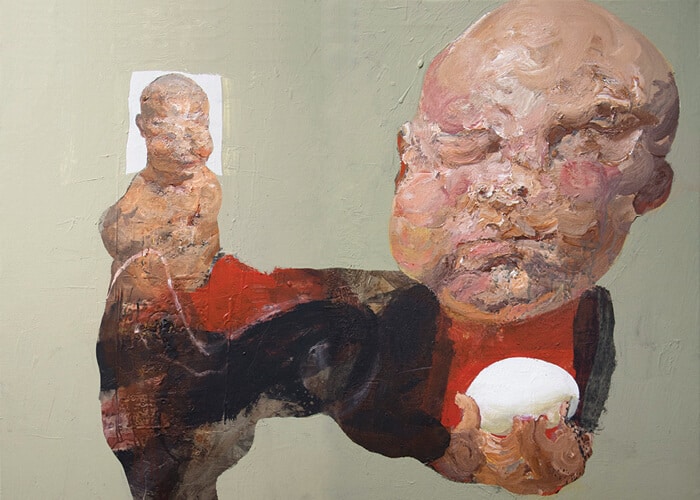 Baran is driven by a symmetrically opposite approach. The artist integrates western expressionist manoeuvres and exploits them to reach a locally rooted expression, depicting figures inspired by Assyrian and Babylonian mythology. Baran has also developed a strong individual style that visually engages the viewer to decipher his arcana and grasp an intelligible and contextual sense of his project. Just like Ba’s, his work has several layers. The superimposed colours he uses recall the turmoil of existential questioning and present a mystical and experimental outlook of our existence. 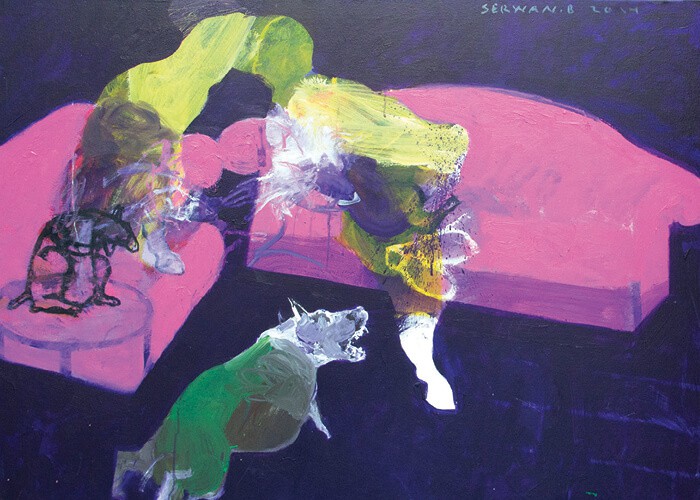 The codified artworks of both artists enact a twist in the making of contemporary African and Middle-Eastern art. In the 20th century, an exacerbated enthusiasm for ‘primitive’ art set children’s art as a serious artistic source of inspiration. Artists were then enticed to seek what John Ruskin called the “innocence of the eye” and look at life with a state of everlasting newness. Rather than confirming the simplistic parallel drawn between children’s art and ‘primitive’ art, Ba’s totemic figures subvert the Western idolisation of childhood innocence and instead emphasise the ambiguity of that stage of life by conveying the complexity of transitioning into adulthood. Similarly, Baran frees himself from the confines of abstract expressionism by pouring Oriental imagery into Western Art. He appropriates the language of European expressionism and yet he shows the specifics of the universe in which he evolves. His concern with pigments anddistortion over figuration set his work apart from abstract expressionism and conventional approaches of the genre.

One creates sublimated prosaic activities theatrically displayed on a stool, while the other unravels a myriad of subtle variations of tragedy through pathetic figures. Both succeed to disclose the struggle of the ontological being in metamorphosis.

Farid Zahi (Morocco, 1960) is a writer and art critic, currently director of the University Institute for Scientific Research of Morocco. After pursuing philosophy studies, he completed a doctorate in Islamology at the Sorbonne in Paris. He has produced numerous publications, in both Arabic and French, on the body, the image and the imaginary in the Arab culture, as well as several translations of North African and French authors.