A History of Queerness: Confronting Intolerence through the work of Angel-Ho & Queezy

Quaid Heneke and Angelo Valerio are not simply close friends, but describe themselves as sisters. Years before they were born, both of their mothers lived in Kensington, a Northern suburb in Cape Town that was classified as ‘Coloured’ during the Apartheid Group Areas Act. While Valerio grew up in Cape Town, and Heneke in East London, they met online before connecting in person. Remembering seeing Heneke for the first time, Valerio recalled thinking, “Who is this beautiful person? I was still in high school, and I had never seen anyone like Quaid in my life.” 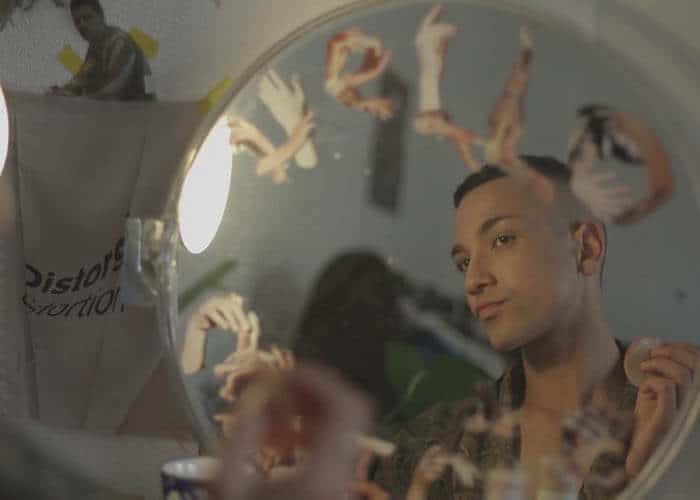 A self-described “club kid,” Valerio is a founding member of the African diasporic sound collective NON, and has steadily developed their performance practice by focusing on issues of gender, visibility, and explorations of the feminine. Valerio performed extensively under the moniker Angel-Ho while completing their studies at the Michaelis School of Fine Art at UCT. As a member of NON and in their own capacity, they have appeared most notably at the group exhibition ‘The Quiet Violence of Dreams’ at the STEVENSON and blank projects in Cape Town, at PS1 in New York, and at the 9th Berlin Biennial.

Heneke is new to the art world, and has used his own experiences in tandem with his training as a fashion designer, to complicate the gender binary through the use of fashion and the creation of Queezy, a persona of the artist. Tapping into, and playing with the art of drag, Queezy is cheeky, glamorous and seductive. Queezy is also the subject of Heneke’s first documentary, Reckoning: A Fabulous farewell to toxic masculinity (2016), for which Valerio provided the soundtrack. Now in his final year of fashion design at the Cape Peninsula University of Technology, Heneke specialises in creating garments that disrupt notions of masculinity and value in the manufacturing industry. 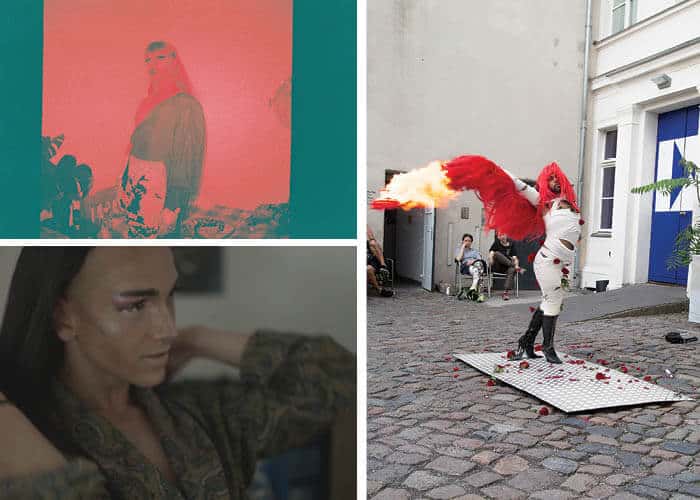 As queer people of colour in Cape Town, Valerio and Heneke’s femme expressions of gender do not merely exist as intellectual explorations, but remain with them in their daily experiences. Both artists possess an acute awareness of the importance of queer history, both in Cape Town and globally,in the development of their own work. The historical prominence and visibility of queer individuals in communities of colour, particularly within self-defined ‘Coloured’ spaces, while acknowledged, is not often discussed at length. The reclamation of these unelaborated histories encourages a sense of belonging in a deeply segregated city, that despite it’s ‘pink’ status, remains adverse to queerness outside the homonormative (cisgender male, white, gay).

The paradox of visibility and erasure – an enduring problem facing the queer community at large – presents itself in the narratives Heneke and Valerio wish to reclaim. “Learning the history of the Kaapse Klopse,” said Heneke, “there were gay men on every single street corner. They would be the head of the parade on their street. I always thought that was so amazing. Forced removals were part of a system that drove a wedge within the Coloured community. That togetherness is something that I want to rekindle.” For Valerio, the untold history of the queer origins of dance music is something that has major implications: “Club and dance music filters through pop culture, and becomes this commodification of our joy and our work. I’m pointing “no” to that.” 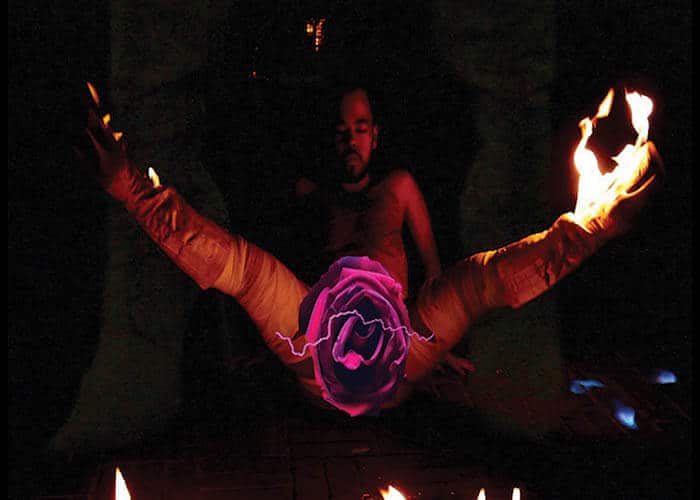 In their film Find Your Light (2016), Valerio strides through flames that lick their white stiletto boots. Flames recur in their performance of Red Devil; Gia (2016) at the 9th Berlin Biennial. Angel-Ho, as Gia, wore a fluorescent red wig that fell to the floor, their body bandaged and adorned with red roses. A chest of hair peeked out from the ensemble. At a critical point, Gia lit the end of their luminous wig, which simultaneously transformed into a wing. Fire, Valerio explained, is used to signify “how we constantly walk with violence. Through that fire we are constantly renewed.”

Valerio discussed the power in responding to violence, verbal or otherwise, and the internalised self-defense mechanisms that queer people often adopt: “You develop this quick attitude, this wit, that comes with being queer or gay in Cape Town.” Confidence becomes as much a positive development of identity, as it becomes an armour with which to greet the world.

Queezy, an artistic extension of Heneke, is confidence personified. Captured in the documentary of the same name, Queezy struts and saunters through various locations. At home in the backyard or in the park, she whips and flicks her long, straight black tresses as they fall over her outfits – elaborate garments accessorised with full-length gloves and jeweled nipple caps. In a scene filmed in her room, Queezy looks into the mirror, on which a collage of fleshy bodies spell out the word moffie, and she recalls a memory in which a young child called her a moffie. Speaking to Heneke some weeks later, he stated: “At the moment [moffie] is the most fabulous word I can think of. Although the word was developed to hurt gay men, I’ve made it my own. It used to really hurt me. But then I thought, how can a word hurt me?” 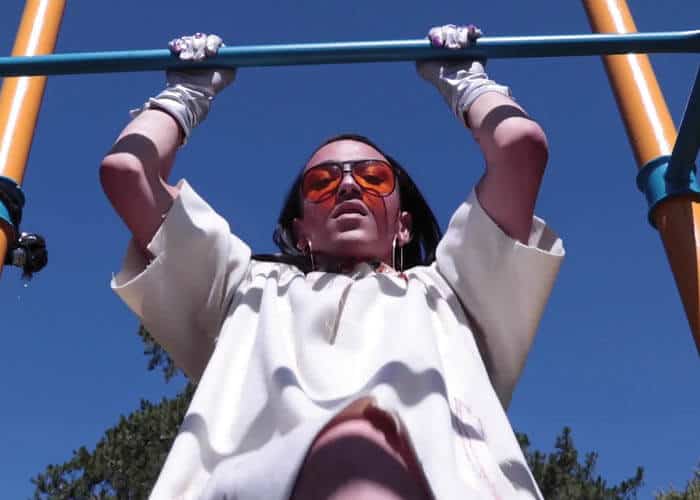 Reflecting on the long history of queerness within communities of colour, Valerio is critical of the limits of this acceptance: “In pageants, ballroom culture, and vogue, there is a particular way in which we present femininity – how you walk in your pageant strut, how you mince across the ballroom floor. For me, it’s always been about the expectation of a fully realised vision of a queen. It’s so beautiful, but there’s no space for expressing other kinds of femininity in those spaces.” Valerio ruptures this ‘complete’ femininity in their refusal to adhere to aesthetic, or preconceived ideals of gender. Simultaneously, Valerio deconstructs conceptions of masculinity through conceptions of the femme that are entirely their own. “Why do my nails intimidate you? I like to make people feel uncomfortable with my femininity, because you need to question what makes you uncomfortable with the way that I dress,” they said.

‘Packaged’ serves as an important way to understand the nature of material consumption, but equally, the way in which hegemonic expressions of gender are determined by the consumer market. “I learned that fashion is not open to breaking the gendered mold,” Heneke elaborated. “The fashion industry pushes a structure – the organisation of man and woman. I wanted to leave that, and break it myself.” Heneke begins to subvert this through the creation of garments – purposefully playing with messy stitching, and imperfect seams. Like couture, Heneke is interested in making once-off garments, but in an intended contradiction of terms, describes his apparel as “kak cheap haute couture, because haute couture is not accessible to anybody.”

Heneke and Valerio consistently confront intolerance – even to the point of danger – through purposeful acts of defiance. Engaging with beauty critically, the politics of dress and appearance serve as important means to negotiate their inner desires and challenge the expectations of the outside world. In their willingness to be vulnerable, coupled with a sensitive understanding of their environments, each artist works towards their own sense of solace.

Amie LH Soudien is an artist and arts journalist from Cape Town. She completed her BAFA from the Michaelis School of Fine Art in 2013, and her MA in New Arts Journalism from the School of the Art Institute of Chicago in 2016. Soudien is interested in emerging artists from Africa and the diaspora, and the intersections of art, art history and popular culture.