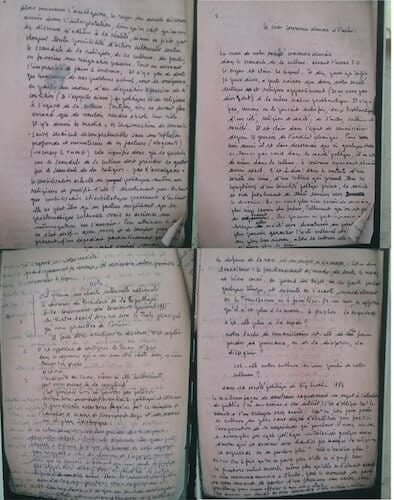 This article provides a short, dense reflection on the importance of revolutionary artists, thinkers, and activists who developed their practice in the frame of a cultural spirit that ‘declared’ its objective in the form of a struggle against imperialism, colonialism, neo-colonialism, racism, and all forms of foreign aggression, occupation, domination, interference or hegemony as well as against the great powers and bi-polar bloc politics.

In this respect, a short note shall be dedicated to some relevant events that took place within those countries that post-1955/56 co-operated to bring about the Non-Aligned Movement (NAM). Formally founded in Belgrade in 1960, after the internationally known Bandung conference in 1955, the NAM was largely the brainchild of Josip Broz Tito, Jawaharlal Nehru, Gamal Abdel Nasser, Kwame Nkrumah, and Sukarno. On an international level, the NAM played a major role in various ideological conflicts throughout the 60s and 70s, including extreme opposition to apartheid regimes and the support of movements promoting freedom from colonial power in various African countries which sought to adopt socialism1 (although in many cases, any socialist reforms were then impeded by internal civil wars that occurred immediately after independence had been gained), including Ghana, Algeria, Angola, Zimbabwe, South Africa, and Mozambique, among others. We shall consider other key ‘socialist ways’ that spread through several countries which never actually joined the NAM, but which explicitly shared the same socialist ideals and aims, like Senegal and Mali, to lead their realities towards the ethic/economic principle of social development in the broader sense of the term (i.e. political, economic, social and cultural).

The literature that thinkers of the past decades left in our hands function as testimonies that advocate positive influences on the development of culture and its impacts on social standards, starting from the programme of self-organisation by Edvard Kardelj, to a programme of ideas for cultural struggle by Antonio Gramsci, Arjun Appudarai’s thoughts on imminent transformation of cultural values and functions, and Édouard Glissant’s genial notion of ‘opacity’ and the understanding of history, culture and human resources. Other authors and prominent thinkers such as Franco Berardi, Homi Bhabha, Luc Boltanski, and Eve Chiapello have reflected upon the consequences that a lack of consideration and implementation of their models of governance had and still have – shedding light on the necessity to articulate in our present a proper statement in respect to concepts of governance, participatory democracy, assembly, collective truth and human relations.

The reality of those specific contexts and currents of thought was certainly that various political aspirations coexisted. Our generations shall really try to understand the guiding aspirations of people’s dreams and social dynamics affecting life as a whole, and also stimulate a specific cultural and artistic attitude, visual and aesthetic productions, organisational models and political movements. Specific attention shall be given to the often forgotten role of poets and writers of the time, which in the immediate post-World War II period (1945-1960) largely influenced the new-born constitutional texts and – paradoxically in almost all cases – served as the real initiators of the socialist movement (from Mayakovsky, Gorki, and Malevič to Césaire, Anta Diop, Sédar Senghor and Kosovel, Kardelj, Kundera and Havel, to name but a few). Later on, specifically between 1969 and 1989, a huge number of autonomous initiatives run by the working class, intellectuals, and artists – which the system had de facto allowed to flourish – were brought under control, repressed by one or the apparatus (be it the Colonial, Capitalist or Socialist one) which simply aimed, first and foremost, to maintain its power monopoly.

History has seen a myriad of unrealised utopias, in the manner of movements of sociocultural and political solidarity. Among them were the revolutionary movements of Black Internationalism, the politics of Négritude and the so-called Bandung Spirit, but a systematic study of these historical trajectories, cultural and political collective formations, as well as a systematic comparison of these various phenomena and their2 impact on new contemporary geopolitical realities and territories has yet to be carried out All of these experiences were seen as moments in which those involved strongly believed in change; moments in which imagination and purposefulness were the condition of possibility for the establishment of a new social order or of a new conception of state – a state of opacity or a new state of things. The neo-avant-garde movements (60s) and sub-cultural formations as well as the so called “resistance art” (70s and 80s), which were widespread throughout the above-mentioned territories, present notable similarities that may be traced far beyond predictions: from the SFRY to Algiers, from Senegal to Nigeria, from Angola to South Africa, from Poland and Hungary to the former Czechoslovakia. We shall presume that those facts had an enormous influence on the cultural operators and artists working today, for artists’ social responsibility is once again being debated. What we find is a strong need to overcome the lingering ‘state of amnesia’, brought about by social ideals that have spread their web over our civilization’s cognitive tradition.

These are points that one of the most prominent contemporary artists and poets Issa Samb – who founded Laboratoire Agit’Art in Dakar in the 70s – has been repeating over and over in his graspable yet sometimes cryptic body of work. Marche! pour tojours (which means “Walk! forever”) is what he wrote to me on the first page of his book, in Dakar, when I asked him to give me permission to publish some of his writings, reproduced in the next pages of the present magazine.  The neo-avant-garde reformative soul of Issa Samb’s body of work is deeply rooted in African traditions, where the simultaneity of forms and actions are always embraced by perfomative movements and spoken words. They together become living manifestation of what art shall be – opaque or not: it has to struggle for the new, without falling into a seeming nostalgia in constructing new forms of what has already happened. While reading his pages – taken form Word! Word? Word!. Issa Samb and the Undecipherable Form which is also the title of the first comprehensive and beautiful monograph on the artist, edited by Koyo Kouoh and published by OCA Norway and Sternberg Press – we shall keep in mind that words and poetry are tools that can give us the freedom we are looking for, as they are the only tools that can free language from any automatisation.

Mara Ambrožič is a PHD researcher at the Exhibition Research Center at LJM University of Liverpool. Since 2015 she is Project director of IRWIN’s NSK State in Time and founder of Libraries of the Future, an ongoing project around engaged publishing realities, writing practices and reformative power of associationism. Among other, she is associate editor of Archive Books, Berlin and member of Raw Material Company of Dakar.

As a matter of fact, these labels were and still are largely confused, particularly ‘socialism’ and ‘communism’. The former is based on the ideals of a non-oppressive society that does not provide models but only principles and aims, still shared by those who believe in a ‘concrete utopia’; the latter covers systems and/or parties as a concrete historical formation that went on to develop concrete institutional models.

To start a comprehensive study in the form of a long-term project dedicated to these topics were the guiding aspirations of the international meeting entitled ‘States of Opacity: Art, Politics and New Social Imaginaries International Symposium’, a forum-set at the Gare Ferroviaire (central trainstation) that I have curated together with Elvira Dyangany–Ose during the 12th edition of the Dak’Art Biennial in 2016. As a matter of fact, the lack of funding, combined with serious administrative problems, caused a temporary arrest of the tentative  to continue an international study that would  aim to foster the collaboration among individuals from the Department of Visual Cultures at Goldsmiths, University of London; the Department of Art at HEAD – Geneva University of Art and Design, GradCAM Dublin – The Graduate School of Creative Arts and Media (DIT); and AVA – Academy of Visual Arts of Ljubljana.