A Meditative Journey at AVA

in News Articles 2013
Share on facebook
Share on twitter
Share on email
Share on whatsapp
The AVA Gallery, Cape Town, is currently showcasing solo exhibitions by established artists Johann du Plessis, Harris Steinman, and Stefan Blom, as well as an inaugural solo exhibition by the young up-and-coming painter, Swain Hoogervorst.
By Fay Jackson
Upon entering the gallery, the work of award-winning artist Johann du Plessis occupies the first room. Printed on Perspex, the individual works are all the same height and are thus connected to form a unified larger panorama.

Johann du Plessis – From the flash!back(s) series – 2012/2013 – UV cured inks on perspex.
A coalescence of photography, drawing, and collage, this work is symbolic of the artist’s long and arduous battle with cancer, and the passage to his subsequent recovery. Utilising photographs taken on a drive from Oudtshoorn to Cape Town, it is less a documentation of specific places, and more a process of reflection through memory and re-enactment.
Perhaps the most visually arresting of the work on showcase is the paintings of emerging artist, Swain Hoogervorst, which inhabit the main gallery space. In his first ever solo exhibition; Hoogervorst is one of a new generation of South African painters who are reinvigorating the applied nature of traditional oil painting through explorations of contemporary subjects. Of the three distinct bodies of work on display, the most striking are Hoogervorst’s impressions of suburban swimming pools. 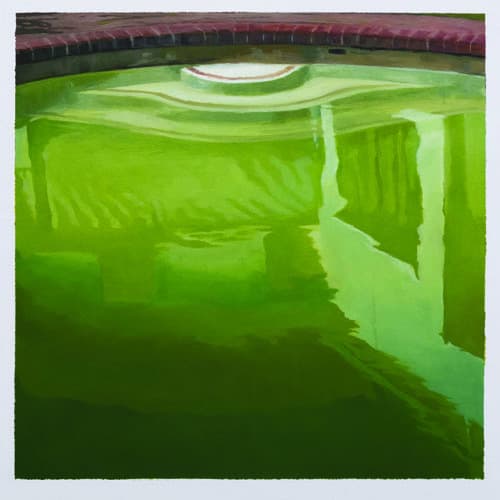 Swain Hoogervorst: Reflection 3 primaries plus white (2014); Oil on paper.
Utilising photographic references, the artist applies various photographic traits to his work, such as the inherent technical characteristic of cropping. Pieces of poolside furniture are fragmented, not only by the edge of the frame, but dually in the reflective surface of the water. Shadows cast by Kreepy Kraulies and poolside foliage ripple in almost photorealistic water, achieved through finely applied layers of paint and glaze.
On the mezzanine level, one finds the strangely troubling photographs of Harris Steinman, images evocative of memory and it’s disconnection from lived reality. 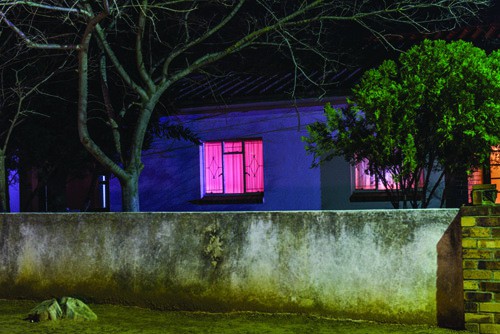 Harris Steinman- Figments : 9.18 pm – 2013 Archival pigment print; 297 x 420 m.
Steinman revisited his childhood town to find areas that were so vivid in his memory seemed to have succumbed to the disintegration of time. Each image depicts the deteriorating façade of a house, each one separated from the foreground by a perimeter wall. These mundane neighbourhood scenes come alive with the sense of a haunting presence hidden from sight, the only indications of human presence being a lighted window here, a discarded Coca Cola can there.
Stefan Blom’s work is the most jarring to the overall aesthetic achieved throughout the exhibitions. “Anti-Aircraft Girl” presents a Frankensteinian alternative to the rest of the meditative work on display. 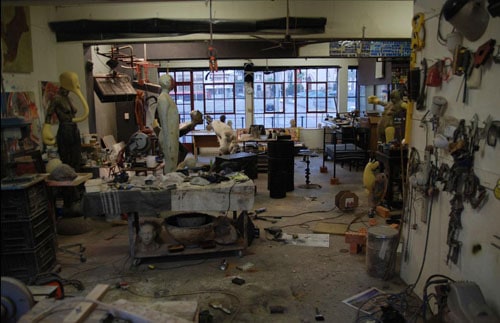 Stefan Blom’s Studio
An amalgamation of the human form and heavy artillery, the unnerving life-size sculptural work purports to explore the relationship between personal morality and authoritative coercion.
Overall, each of the exhibitions implies a journey; for du Plessis, a journey through darkness and into the light, while Steinman takes a trip down memory lane. Notorious for providing little info on his work, it’s difficult to discern what path Blom is on; but for Hoogervorst it’s easy to see that the road to success is looking definitively bright.
See the work at AVA Gallery, Church Street, from the 15th of April until 8 May 2014.
Text by Fay Jackson
Images from www.ava.co.za