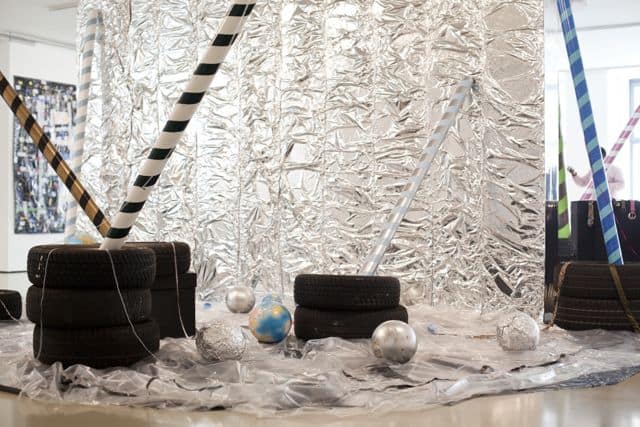 Moshekwa Langa, The Jealous Lover, Installation view, ifa Galerie Berlin, 2014 © Victoria Tomaschko. Taken from Contemporary And.
Upon entering the Ifa Galerie in Berlin, we are confronted with a strange mess of objects: The Jealous Lover, a site-specific installation by artist Moshekwa Langa, shown as part of the series of exhibitions “Solo For…” organized by the institute. Resembling the debris left in a playroom by a horde of children, the installation at first only arouses our curiosity. But the collages, paintings, and video surrounding it begin to offer us a few reference points.
Born in Bakenberg, South Africa, in 1975 and now moving between Johannesburg, Amsterdam and his city of birth, the artist’s many geographical, intellectual, cultural, and above all perceptual displacements engender his entire artistic production.
Though it may not take the traditional form (writing), the work of Moshekwa Langa can be viewed in terms of complex narrative structures that lend themselves to a unique form of storytelling.
As a teenager, Moshekwa Langa quickly noticed that the textbooks and maps they studied in school didn’t include stories about people like him, his family, or the “place” they came from, and he aspired to tell these stories himself. But he soon found the practice of writing to be limited – or in any case, unsuitable for his purposes. He then began to collect notes, objects, press clippings, images, and even various kinds of scraps found here and there, understanding them as different symbols forming a language analogous to words. What appears to us here as a random heap of various objects strewn about the middle of the room in fact precisely embodies and stages thoughts and impressions conveyed both formally and symbolically. But we must not understand it as a system of rigid codes. If, as the artist indicates, the funereal hats placed at the end of multicolored rods are attributes of the feminine and the balls recall images of the globe found in atlases, then, as with portmanteau words, these assemblages of disparate objects and colors can be associated in various ways and are open to multiple interpretations. One should also not neglect the importance of intuition in guiding the artist’s choices and gestures.
Moshekwa Langa plays with different scales and volumes that, taken together, immediately suggest a sort of urban landscape, perhaps Johannesburg, with its impressive concentration of skyscrapers. But here it’s an uninhabited city, abandoned hastily following some crisis – one finds nothing but the remnants of imaginary residents: hats, belts, tires, balls, ties and suitcases. We find these “people” surrounding the installation, notably in the video that fills the space with its soundtrack. “Where Do I Begin,” the famous refrain sung by Shirley Bassey, repeats in a loop while the viewer observes a queue in front of a bus. The artist only allows us to see the lower part of the bodies, focusing on the shuffling feet that reveal the impatience of their owners. Using footage taken during a return to Bakenberg, the artist shows the incessant comings and goings from the village toward the city – from trips of a few hours to definitive departures motivated by a search for work. The hope for an Eldorado is a myth that seems to echo here in Johannesburg, the economic capital of South Africa, a city founded on the strength of gold deposits in Witwatersrand – but which can be extended to numerous other contexts and geographies.
Langa employs storytelling based on personal experience in order to develop his own mythology and weaves it into a general aesthetic of games and childhood. One nevertheless perceives, underneath these playful disguises, the marks of the real: his experiences, his memories and his traumas. 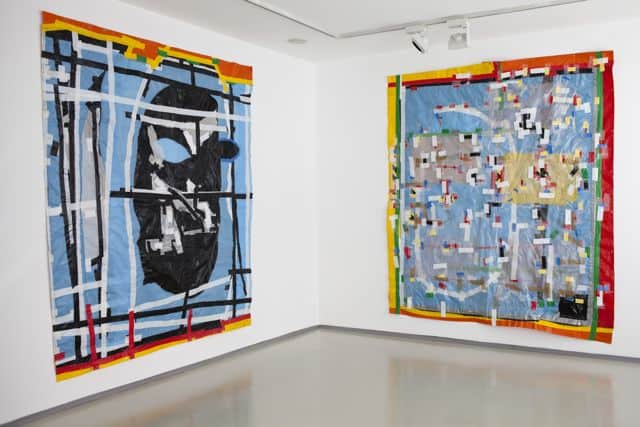 Moshekwa Langa, The Jealous Lover, Installation view, ifa Galerie Berlin, 2014 © Victoria Tomaschko. Taken from Contemporary And.
This system of juxtaposition of diverse symbols and modes of discourse echoes James Joyce’s Ulysses, one of the artist’s labyrinthine reference points.
This discontinuous assembling of heterogeneous elements constitutes the artist’s private cartography, though a fragmented and incomplete one. Opposing or circumventing the classic cartographic codes conceptualized by Western thought, the artist’s collages reference places visited and people met, whether actual or imagined. If a few formal or historical analogies are readily apparent to the attentive viewer, certain “maps” on the walls of the gallery remain enigmatic, even silent.
Collage-paintings such as “Recedes and Fades” (2012–14) or “Modjadhi, The Man Who Would Rule in the Rainmaker’s Kingdom” (2012–14) manifest an ensemble of relations through a kind of copious note-taking, whose imprints, fixed on the canvas, describe the artist’s many displacements.
Like a surveyor, Moshekwa Langa charts and integrates different points, thereby constructing complex, protean dreamscapes that constitute the archive of his own life and give us his private conception of the world.
“Here the meaning of the ‘relation’ has to be understood quite literally, not as a connection between pre-located entities but as a path traced through the terrain of lived experience.”
Tim Ingold, Lines : a brief history, Oxford, Routledge, 2007, p. 90.
Gauthier Lesturgie is an independent art writer and curator based in Berlin. Since 2010 he has worked within several structures and projects such as the Galerie Art&Essai (Rennes), Den Frie Centre for Contemporary Art (Copenhagen) or SAVVY Contemporary (Berlin).
Full article and all images taken from Contemporary And, Platform for International Art from African Perspectives.