A vision of African artists

PIASA will organise on November 14, 2018 its 8th sale of contemporary African art. About 150 modern and contemporary works in all media, painting, drawing, photography, sculpture and tapestry will offer a panorama of the diversity of a booming art scene.As evidenced by the growing visibility of African-American artists such as Kerry James Marshall, Kehinde Wiley, Amy Sherald, Crosby, there is now a hyper realistic artistic movement being built across the Atlantic on a large scale led by black artists sublimating the daily lives of African Americans. At the same time, the Post-Black movement theorised by Thelma Golden, director of the Studio Museum in Harlem, questions the practice of these African artists who refuse to be categorised as African-American even though their practice is rooted in racial issues and the place of Americans with African heritage in the United States. 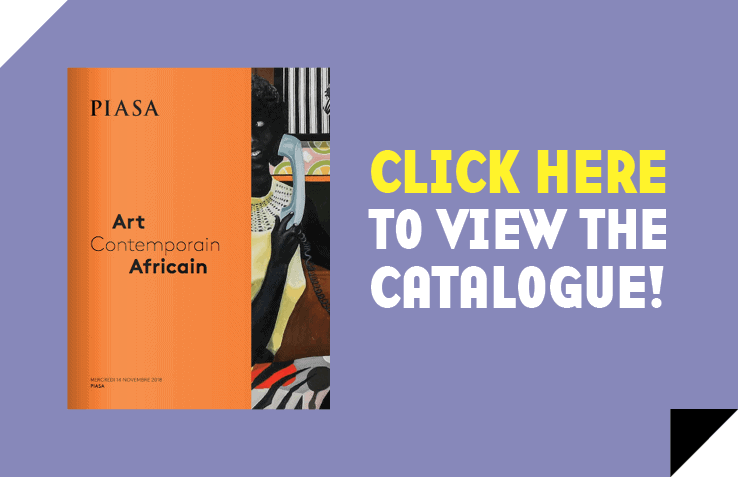 What is the resonance of these trends with the new generation of artists on the African continent? Are there already identifiable movements in the practices of contemporary artists linked to Africa? What is the place of portrait processing in their practice? Here are some of the areas that will be explored during the next sale of contemporary African art at PIASA on November 14.A selection of works dealing with the portrait and questions of identity from the colonial past, religion, sexual identity… by artists JP Mika (DRC), Aboudia (IvoryCoast / USA), Amadou Sanogo (Mali), Bambo Sibiya (South Africa), Léonce Raphaël Agbodjelou (Benin), Paul Ndema (Uganda), Ian Mwesiga (Uganda). 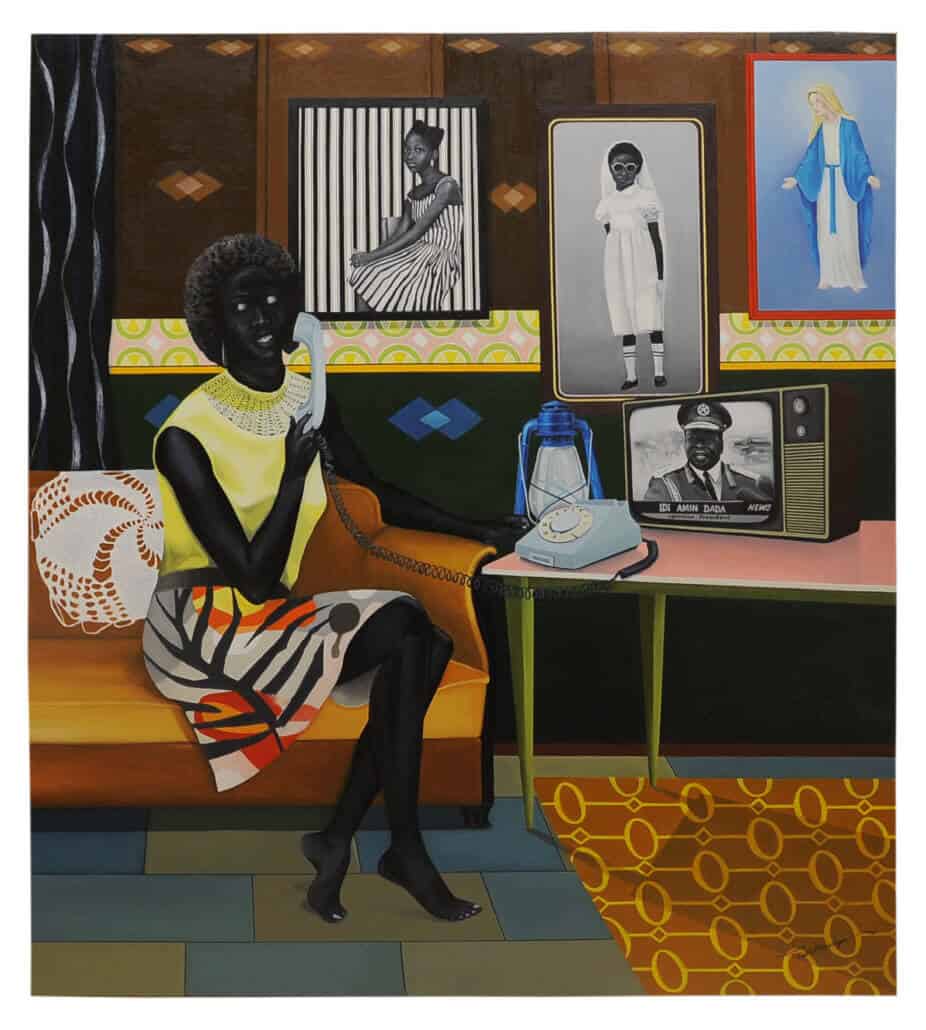 An extremely rare artist on the market, Mwesiga refers to the aesthetics and feelings of the Black Arts Movement, considered to be the literary and artistic wing of the Black Power Movement that began in the United States in the 1960s. He uses this ideological visual language to challenge the ethnographic view of post-colonial African society by creating striking reflections and proud celebrations of social identity in the context of a highly racialised world. 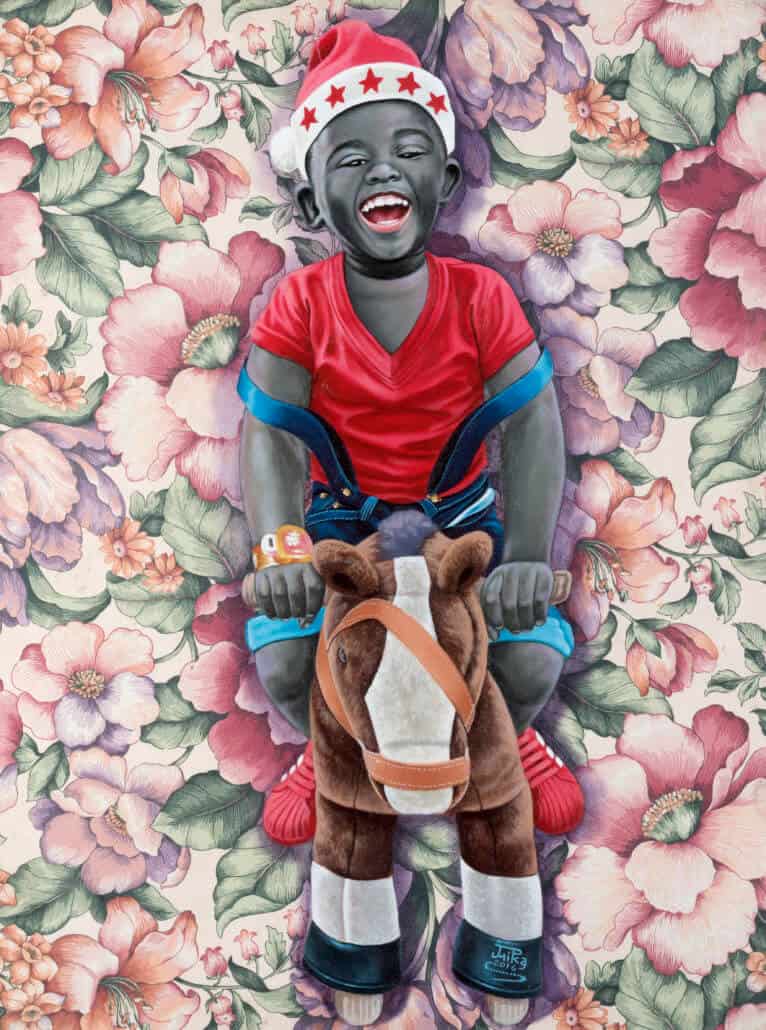 JP Mika was born in the Democratic Republic of Congo in 1980. Following in the footsteps of Chéri Samba, the most famous figurative artist on the Kinshasa scene, JP Mika has become the essential expressionist on the Congolese art scene. Witness of his time, JP Mika often stages himself in costumes of Sapeurs (SAPE – Société des Ambianceurs et Personnes élégantes) in shimmering colours or testifies to scenes from the streets of Kin. In the background, he composes improbable sets that seem to float in the background of his characters, exploiting the serial and floral patterns of the upholstery fabrics that give his work its distinctive style. The expressiveness of his characters and his taste for detail make Mika one of the most talented artists of his generation today. JP Mika was part of the young guard of artists revealed to the general public during the successful exhibition Beauté Congo, at the Fondation Cartier in 2014-2015. 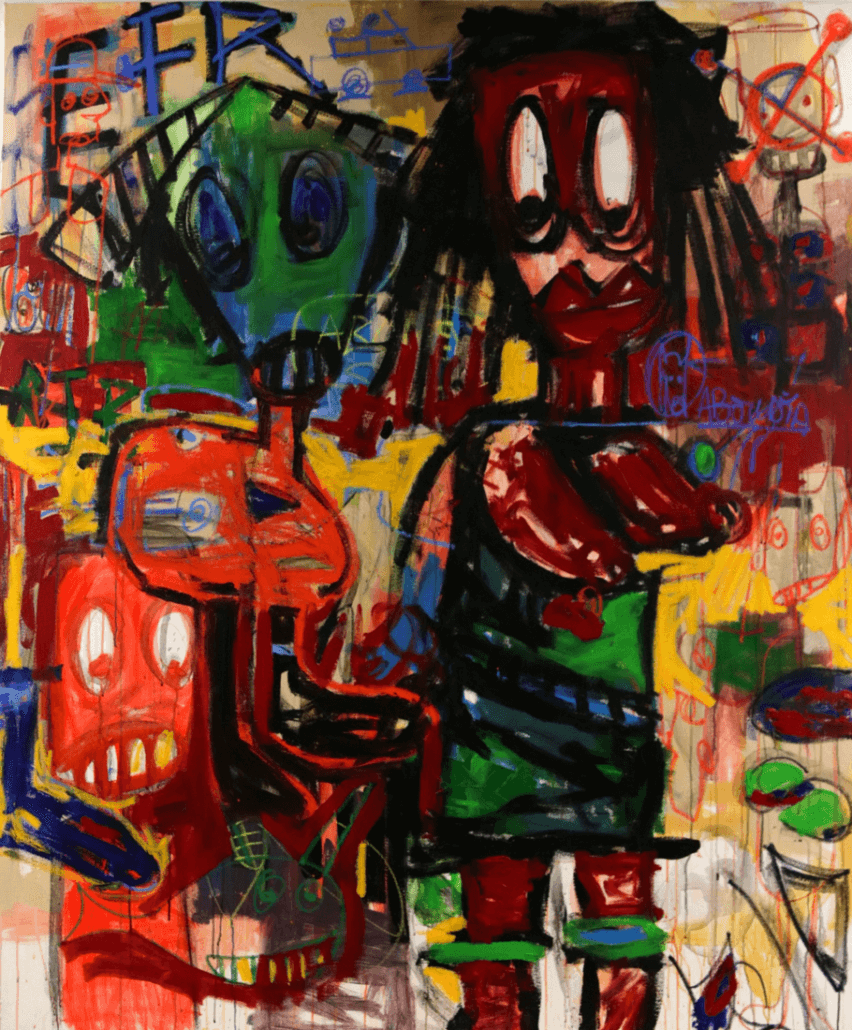 Aboudia was born in 1983 in Abidjan, Côte d’Ivoire, he lives and works between Abidjan and Brooklyn New York. Aboudia was spotted by international critics in 2011 thanks to his works documenting the violence of the Ivorian crisis. In 2010, he lived in Abidjan when the riots that followed the presidential elections broke out. While many intellectuals and artists preferred to flee the civil war, Aboudia chose to stay and work despite the danger. In the cellar near the Golf Hotel where he is secluded, Aboudia hears the whistle of the balls. Back in his studio, he paints what he has seen of the scenes of violence that take place outside. Aboudia’s painting is full of children, but they are very different from the photogenic kids of the idealized images of Africa. These children are painted in a naive and brutal way. Faces in a state of permanent surprise, not yet jaded by the sight of scenes of ordinary violence. Aboudia paints gather a mixture of street styles that he makes his own, a source of escape in response to deprivation, which can be found on the walls of the neighbourhoods around abidjan.If his work is sometimes close to that of Jean-Michel Basquiat, Aboudia, who is not comparable to any other contemporary artist, claims multiple influences. During his first visits to the Tate Modern, he was impressed by Pollock’s large formats and Cy Twombly’s unbridled gesture. He feeds on the street art of young people in Abidjan, Tokyo, Silicon Valley and even more so in the Brooklyn district where he lives. Aboudia’s career has been propelled internationally following the exhibitions Pangea I & IINew art from Africa and Latina America at Saatchi in London. He is one of the few artists from WestAfrica represented in New York, London, Paris… and on the African continent. 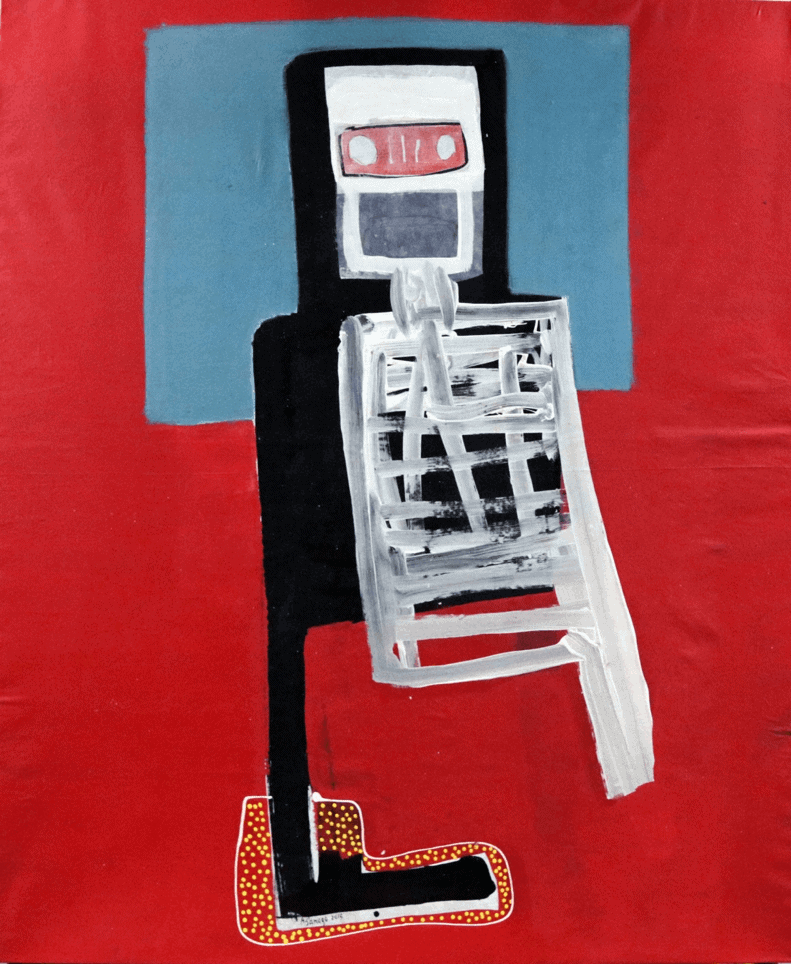 Amadou Sanogo was born in 1977 in Mali, originally from Segou, he studied at the National Institute of Arts in Bamako. Sanogo’s works are a tribute to the Bambara proverbs of his land. Contemporary time and its art help to understand the past. Free from his academic background, Sanogo focused his attention on form and colour. By applying straightforward colour applications in a falsely naïve approach, Sanogo offers a critique of Malian society caught between tradition and modernity. Thus,cultivating the right to subjectivity departed from both the European ethnographic tradition and the expectations of contemporary African art, the simplified, un-expressive figures that Sanogo places in an environment free of unnecessary frills are the hallmark of a young but highly mature artist. Sanogo was presented in the collective The Matter during the 2018 edition of the Dak’art Biennale. 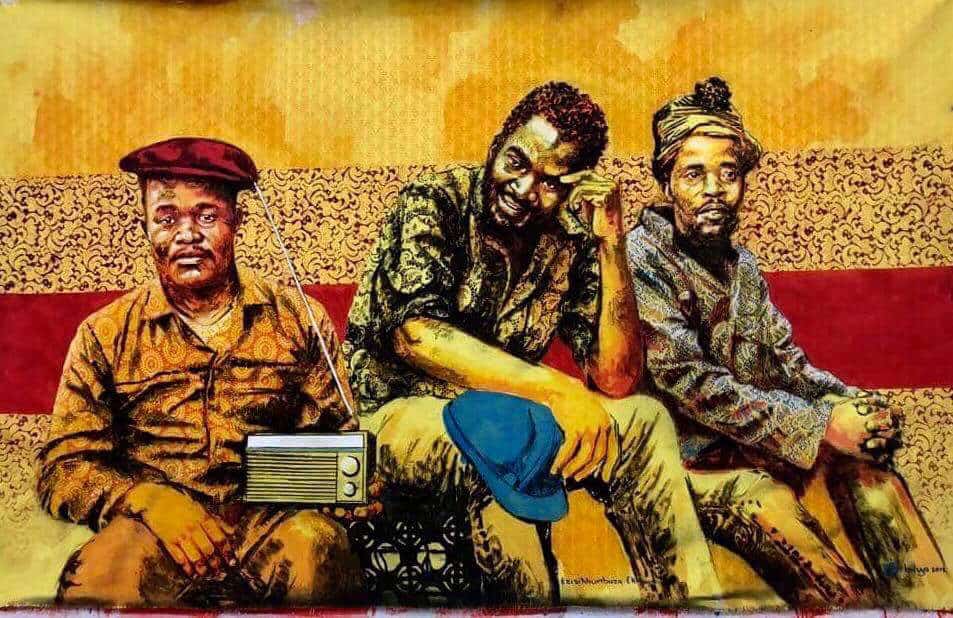 Bambo Sibiya was born in 1986 in the city of Springs near Johannesburg. Sibiya’s work tells the story of the emergence of a subculture that began in the townships. During Apartheid, many young men and women moved from rural areas to Johannesburg in search of a better life. Many blacks, in addition to confronting white power, had to face their own social problems.Fascinated by how a migrant community survives far from home, Sibiya is interested in Swenkas. To reflect to their families the image of success they have come to seek in the city, these working class men from the countryside dress up in elegant costumes, parading and reviving this positive image to their families. During these elegance competitions, the Swenkas also share the common values of cleanliness, sobriety and self-respect. This healthy and humorous competition helps to bring a little happiness in a grim context. Sibiya has worked with the greatest artists of the South African scene: William Kentridge, Norman Catherine or Diane Victor also represented in the November 14th sale. His technique is inspired by engraving. He makes his bright compositions with acrylic and charcoal which he applies through pieces of lace. 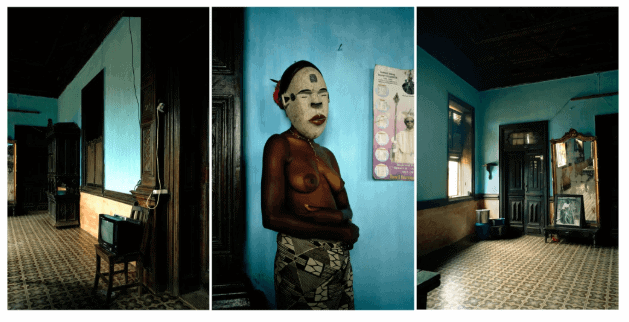 Léonce Raphaël Agbodjelou was born in Benin in 1965. The series of photographs Les Citoyens de Portonovo documents the life of the inhabitants of the port city and former capital of FrenchDahomey. Each of Agbodjelou’s images is a personal exploration of Benin’s identity. Agbodjelou’s triptychs use architecture to evoke the history of a place. The house where the scenes took place has belonged to the Agbodjelou family since its creation in 1890. It was built by Afro Brazilian craftsmen, who were the very view repatriated people regarding the millions of slaves who left Benin. Here and unlike other works by the photographer, the palette of the Portonovo Ladies is dark and sober. The interior, now stripped of its original appearance, occupied alternately by the coloniser and the colonised, bears witness to the past, of a faded grandeur.The presence of the model in the house is intriguing. Naked as in a traditional village, and wearing a voodoo or ceremonial mask, she is both vulnerable and anonymous. It arouses both attraction and repulsion at the same time. An incongruity with which the populations of Portonovo juggle, who have to deal with the past and the present. Agbodjelou is the founder of Benin’s first photography school. 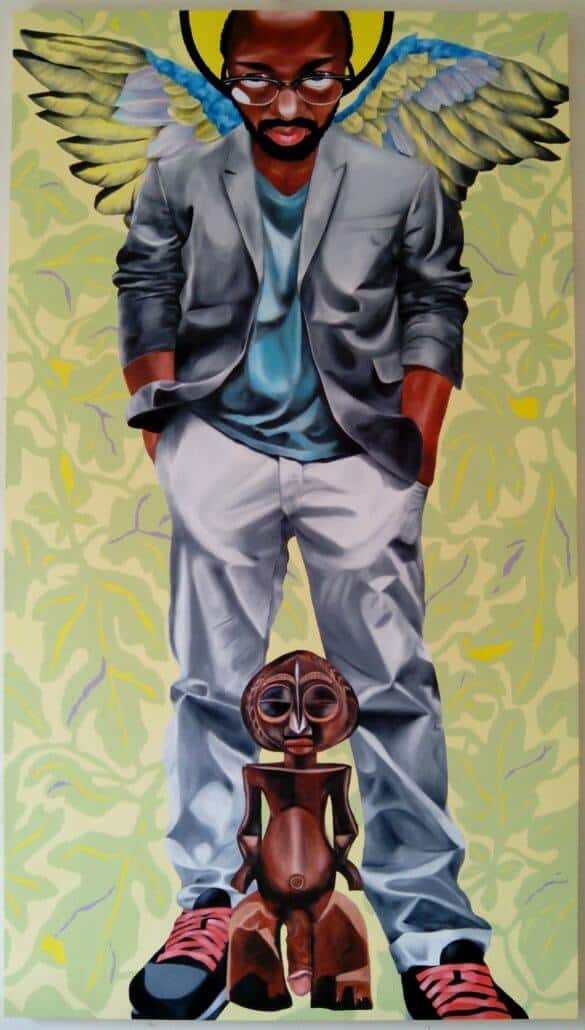 A very rare artist on the market, Paul Ndema is one of the artists on the African contemporary art scene among those who possess a most distinct and recognisable style. Raised in a Catholic family,his work addresses politics, religion, cultural identity and sexuality, and the influence and ethics of powerful people. The majority of these works are self-portraits. These different «Paul’s versions»are composed by means of bright colours with sometimes backgrounds with vibrant patterns on the model of African fabrics. From the front, these characters seem to be caught in the spotlight. His subject is subtle satire, sometimes with blatant humour and undertones about Ugandan society.