in News Articles 2013
Share on facebook
Share on twitter
Share on email
Share on whatsapp
With the FNB JoburgArtFair and Heritage Day just around the corner, September 2015 will be an important month for celebrating cultural diversity in South Africa. Beginning with First Thursdays, a collaborative event that sees new exhibition openings across both Cape Town and Joburg’s inner cities, here is a list of ART AFRICA’s ‘what not to miss’ this evening (03 September) 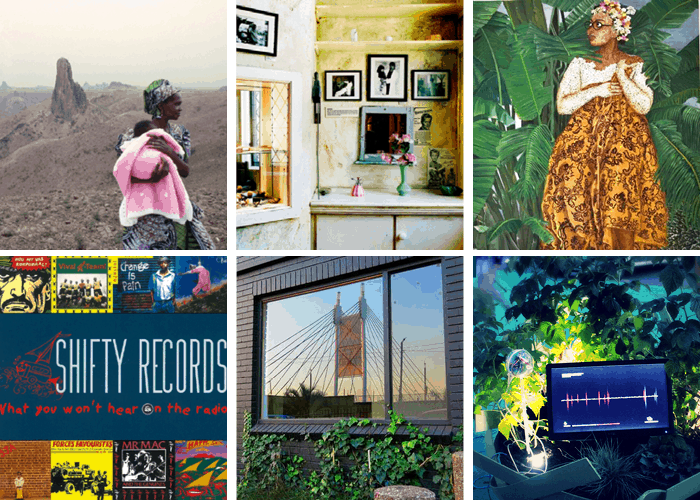 Cape Town:
1. District Six Museum:
The District Six Museum opened its doors for the first time in 1994 as the first community museum in South Africa. Reflecting on the the history of the community that lived and worked in this part of the city, ‘Sound Installations’explores the lives of residents both present and past through a compilation of five sound installations, each reflecting the personal and collective narratives of the area.
In Peggy Delport’s No matter where we are, we are here (2006) we are introduced to a medley of voices, interspersed with the ambient sounds of District Six. The voices speak to you from a large fresco mural, inviting the listener to step closer, to try listen to the individuals through the wall, exploring the theme of ‘return’to District Six.
From the foot tapping square dance rhythms of ‘Langarm’popularised by local bands, to the personal, memory dependant reconstructions of Nomvuyo Ngcelwane’s 20 years living at 22 Cross Street, ‘Sound Installations’paints an intimate portrait of the relationship between individual and community.
Location: 25 Buitenkant Street
2. Gallery MOMO:
Tonight Gallery MOMO will host two exhibition openings; George Hallet’s ‘Same Same but Different’and Burning Museum’s ‘Cover Version.’
They will also be showcasing the launch of the African Consciousness Institute’s online platform. The event (which brings together a collection of artists, photographers, poets and filmmakers) provides a unique insight into the heart of the African Consciousness Institute, highlighting their characteristic focus on collaboration; the pooling of various knowledge economies and the vitality and complexity of our contemporary environment.
Amidst the vibrant backdrop of visual artists like Sukumbuzo Vabaza, Lesiba Mabitsela and Scott Williams comes the spoken word of Thabiso Nkoana, (give this a listen) and Cape Brown: The African Experience in Cape Town; a film shot by Trevor Mathebula and directed by Shiba Melissa Mazaza & Didintle Ntsie. Ntone Edjabe, the Cameroonian publisher commonly known as the founding publisher of Chimurenga, will also be in attendance, this time using music as his vocabulary of choice.
Location: 170 Buitengracht Street, Oro Africa Building
3. EBONY
Hugh Byrne “TATTARRATTAT”
A fleeting shadow crossing an architectural façade. Telephone lines reflected in an office window. A yellow crane swinging through the air overhead. All common sights in the city that merge together to create the life force that is inherent in urban spaces and allow for it to morph subtly over the years, or sometimes, even in a matter of seconds.
Capetonian artist Hugh Byrne’s unique technique and keen eye allow for him to reimagine the lines and patterns found in the cityscape and translate them into dynamic abstract works bursting with the vitality of the city.
‘My works are windows into what I find visually striking- there is constant tension between geometry and abstraction, structure and dynamism’ – Hugh Byrne 2015
Location: 67 Loop Street
3. Worldart:
Opening today at Worldart on Church Street, ‘Withdrawn’is Kimathi Mafafo’s first solo exhibition. Having put her degree on hold to pursue her love for painting, emerging artist Kimathi Mafafo is set to launch a promising career.
Using oil as her medium of choice Mafafo paints large; exercising an acute attention to detail to impart an internal desire to remove herself from the claustrophobic constraints of the congested urban environment. These imaginings run parallel to her personal withdrawal from the day-to-day; to find comfort in the therapeutic process of painting.
Location: 54 Church Street
4. Alliance Fraçaise du Cap
Located on Loop Street, the opening of ‘Shifty Records: What You Won’t Hear on the Radio’is a must see, drawing on historical artefacts from SAHA’s archives to explore the various ways in which Shifty Records was able to create a musical outlet challenging the apartheid regime, raising awareness and, as pointed out in their press release, providing “a healthy subtext of partying apartheid into extinction.”
Performing this evening are artists Loius Mhlanga, Jannie van Tonder and Simba Morri, all of whom have played a significant historical role in broadening the cultural landscape of South African music. Morri has performed alongside the original Bayete, Mango-Groove and in 1996, Crosby, Stills & Nash.
Doors open at 18:30.
Location: 155 Loop Street
JHB:
1. Wits Art Museum
Fak’ugesi Festival Digital Innovation Lab
Wits Art Museum (WAM) in collaboration with Wits Division of Digital Arts will be holding an artist residency as part of the 2015 annual Fak’ugesi Digital Innovation Festival. The Fak’ugesi Festival is a 3 week event that highlights innovation, technology and creativity in Africa. As part of the festival, the WAM Basement Gallery will be transformed into an inspired ‘Fak’ugesi Lab’for 3 weeks from Wednesday 26 August.
During this time, members of the public are encouraged to visit and engage with the four resident artists as part of these artists’creative, digital art-making process. The resident artists include: Jepchumba, Nathan Gates, Ling Tang and Kasia Molga. Join the resident artists on First Thursdays to explore, experience and play with art and technology.
Location: Cnr Bertha & Jorissen
2. Kalashnikov Gallery
Kalashnikov Gallery, who will be one of three ‘Young Galleries’exhibiting work at the FNB JoburgArtFair, open their doors this evening with an exhibition titled ’Death of the Old.’
Join them as they showcase the work of featured artists:
Oliver Mayhew
Elizaveta Rukavishnikova-Mammes
Anatasia Pather
Black Koki
Isaac Zavale
Minenkulu Ngoyi
Io Makandal
Ello Xray Eyez
Andrew Kayser
Roelien Brink
Jacques Kleynhans

See you all out there tonight!