Most artists would be delighted at the prospect of having a substantial book dedicated to their work – in the case of Abe Odedina, such a book is not so much a luxury as a necessity to understand the complex simplicity of his vision. Each of Odedina’s paintings exists in their own right as technically highly accomplished works of art that allow us to smile, frown or laugh out loud while challenging us to think deeply about the significance of the people, deities, animals and objects he depicts. Yet displayed together as they are in this book, it is obvious that these paintings and their subjects are closely connected as parts of a larger whole, an ongoing body of work which Odedina describes as ‘the Project’. 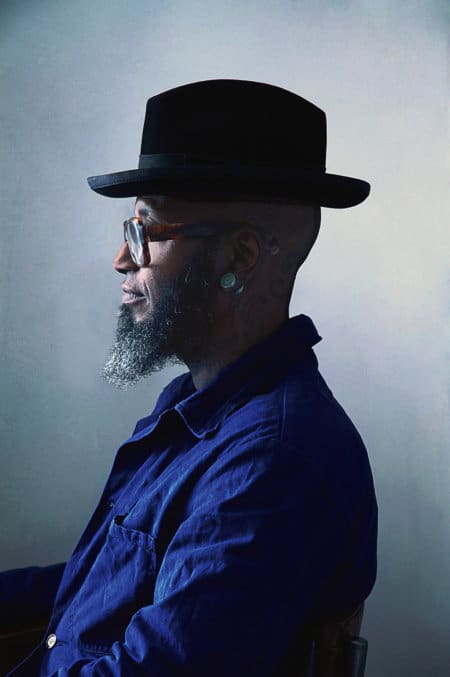 …contemporary artists of African heritage are beginning to correct the imbalance created by far too great an emphasis on the significance of the art history of the ‘global north’.

The book is beautifully designed by Nigel Soper, with a cover that folds out to show the artist’s tattooed body, a work of art in its own right reflecting Odedina’s Project in microcosm. Inside the front cover is a succinct summation by Katherine Finerty, which reads like the introductory panel to an exhibition – appropriately enough, because Finerty has curated all of Odedina’s exhibitions. Following a brief foreword by the British artist David Remfry, the book is interestingly and usefully topped and tailed by three essays looking at different aspects of the artist’s life and work. In the first of the opening two essays the writer and studio manager Emily Watkins, in conversation with the artist, ably demonstrates how Odedina and other contemporary artists of African heritage are beginning to correct the imbalance created by far too great an emphasis on the significance of the art history of the ‘global north’. In the second essay, the artist, anthropologist, archivist and writer Adjoa Armah focuses on the wonderfully diverse and syncretic influences which have moulded Odedina’s visual vocabulary, from Ibadan in Nigeria to Brixton, London, via Hull and Salvador in Bahia, Brazil. In the final Afterword essay, Odedina’s gallerist Ed Cross relates how he got to know the artist following an initial meeting at 1-54 Contemporary African Art Fair at Somerset House in London. Between these three very insightful contributions are well over a hundred of Odedina’s paintings arranged chronologically during a seven-year period from 2013 to 2020. 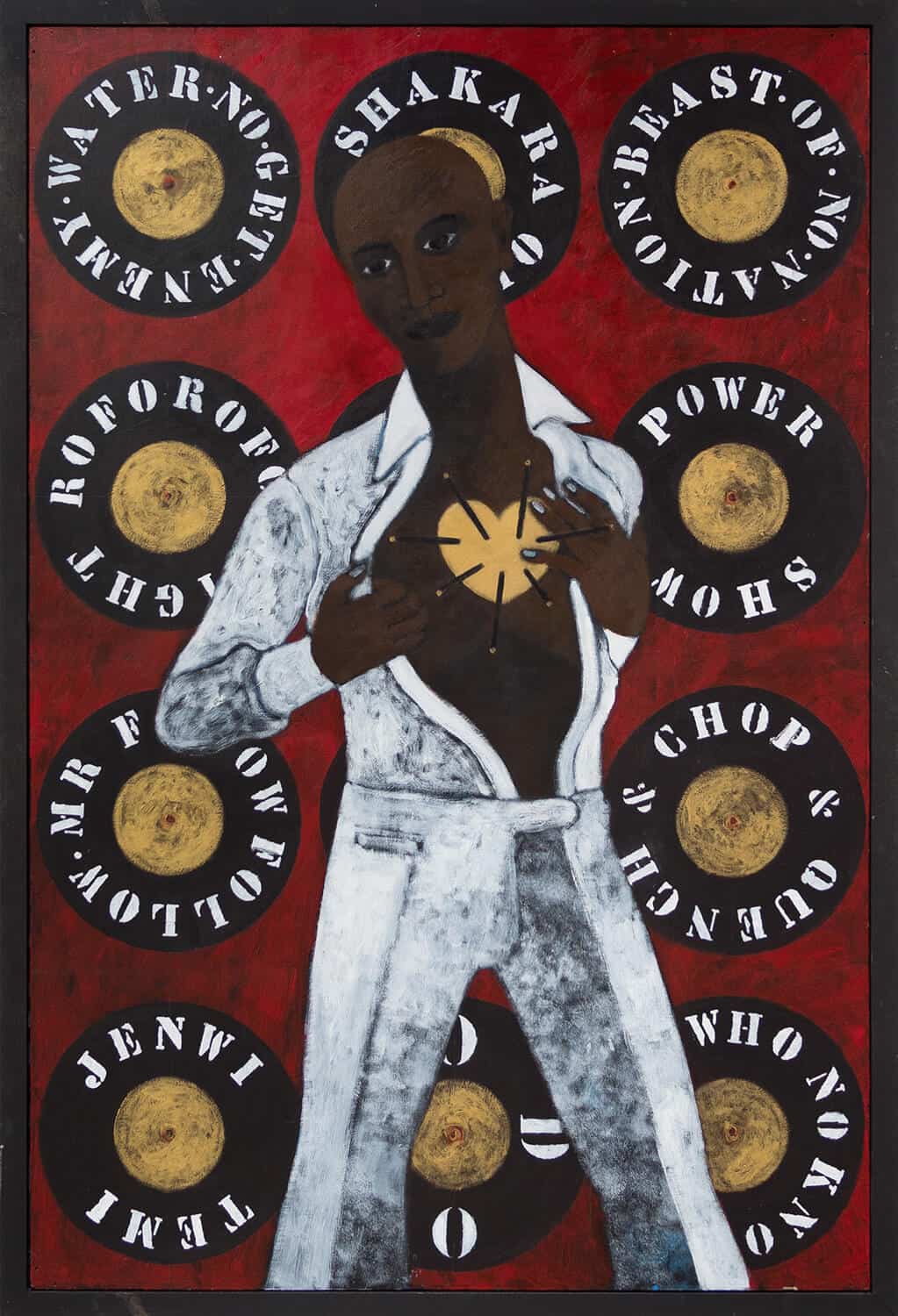 In his foreword, Remfry suggests that Hull’s annual Fair, with its extraordinary variety of sights, smells and sounds, might have been an important influence on Odedina, who studied architecture in Hull and went on to practice as an architect for many years before taking up painting full time. One of my annual rituals as an art student in the early 70s was to walk with some friends to the Derby Day Fair on Epsom Downs. We never saw a horse and heard only the drumming of hooves, but it was the Fair, not the nags, which attracted us. There were strong men, magicians, jugglers, acrobats, fortune tellers, fire eaters and sword swallowers – in short, many of the subjects which appear in Odedina’s paintings.

[He] describes himself as a ‘folk artist’, partly as a conscious way of getting himself off the hook of being a ‘contemporary artist’ and all the associated baggage of art world expectation.

Odedina describes himself as a ‘folk artist’, partly as a conscious way of getting himself off the hook of being a ‘contemporary artist’ and all the associated baggage of art world expectation. He shuns canvas and oil paint, with which he ‘has no patience’, instead preferring plywood and acrylics. As such, his work has an affinity with the brill ‘barber shop’ paintings which appear all over Africa, with artists’ collectives such as the Tingtinga painters of Dar Es Salaam in Tanzania, and with individual artists such as Kwame Akoto a.k.a ‘Almighty God’ from Kumasi, Ghana. But there are also echoes in his work of much older ‘classical’ traditions from Africa, such as the painted wood panels from ancient Christian churches in Ethiopia and two-thousand-year-old portrait panels which were included on mummies from Fayum oasis in Egypt.

In addition to lovingly depicted human beings and animals, Odedina’s work is populated by dozens of recurring symbolic motifs such as open padlocks, playing cards, scissors, books, keys, and ladders – a wonderful sense of mystery. Yet, the artist refuses to ascribe an official ‘meaning’ to these motifs and is content for viewers to make up their own minds. These remarkable paintings are tender and approachable – even humble – in their depictions of human beings, a sense which is magnified by the use of well-thumbed, almost clichéd aphorisms and phrases from the English language with which they are titled such as Barking up the Wrong Tree, Boys Will be Boys, Game Changer, Mum’s the Word and Uncharted Waters.

These remarkable paintings are tender and approachable – even humble – in their depictions of human beings, a sense which is magnified by the use of well-thumbed, almost clichéd aphorisms and phrases from the English language…

The two excellent essays by Emily Watkins and Adjoa Armah, which include images of many of Odedina’s paintings, help to background – and foreground – information and observations, which will be very useful to anyone coming to Odedina’s work for the first time, as well as to those who have become familiar with his paintings over the past few years. Yet, it is not until the Afterword by Ed Cross that we get a vital clue as to how the artist’s work should be best understood, both individually and collectively. In that essay, Cross includes a photo of the hang at Odedina’s 2019 show ‘Birds of Paradise’ curated by Katherine Finerty at the Copeland Gallery in Peckham, south London. Instead of the tastefully and reverentially spaced works with which we have become familiar in ‘white cubes’ worldwide, approximately thirty of Odedina’s paintings, large and small, are closely hung in one corner of the exhibition space. They are individual works, but they are also part of something bigger and inter-connected, populating the space, as Odedina says, ‘like a village’. 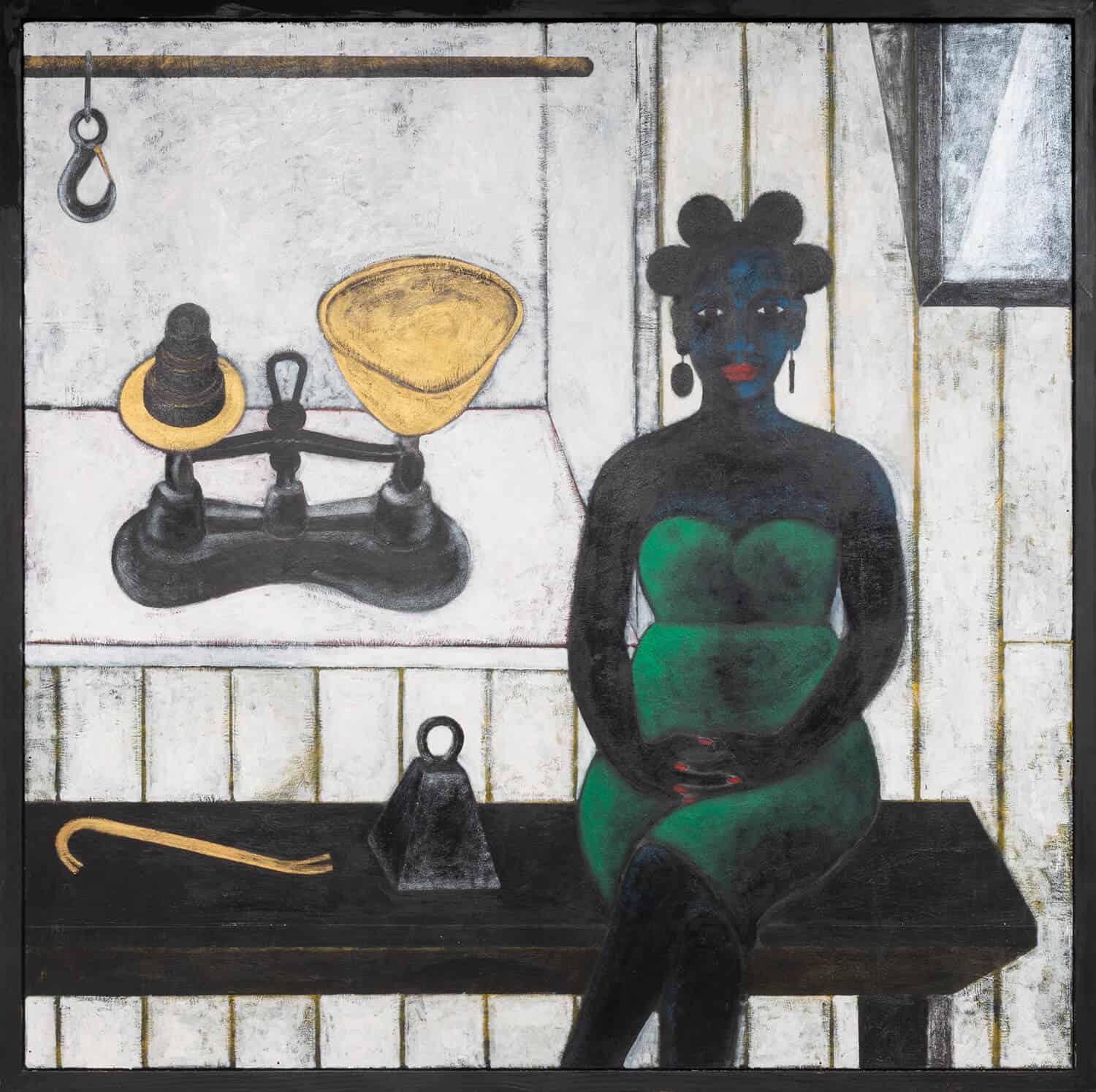 This is such a refreshingly divergent approach from the norm that it might have been useful for the reader to have seen this and possibly other views of the exhibition earlier in the book, not least because Odedina is so clearly an artist who does not conform to artistic conventions and expectations. This is a point well made by Emily Watkins in her opening essay entitled The Benefit of Hindsight (surely a perfect title for one of Odedina’s works?) in which she points out that so many of the genres associated with modern and contemporary art in the ‘global north’ – abstraction, installation, conceptualism, performance etc. – have a much older history in other parts of the world, particularly in Africa. In common with so much that has been forcibly removed from the African continent, these genres have been appropriated and elevated in a Western art world overly interested in its own self-aggrandisement.

Several works collected by Abe and his wife Sarah over the years, including African masks and sculptures, are illustrated in both essays. Commenting on the minkisi power figures in their collection, similar to those which once were commissioned from well-known local artists by spirit healers mganga in what is now the Democratic Republic of Congo, Odedina perceptively comments: “Conceptual art 500 years before we had a name for it in the West.” He is referring to how the mganga would activate these figures on behalf of his clients by striking an iron blade into the wood from which they were made, thus releasing the elemental forces inherent in both iron and wood: cold and hot, culture and nature, man and woman – and maybe Hate and Love, or possibly Love and Hate! Yet, none of this could happen without applying magical substances, including clay from the grave, which was usually placed in an aperture in the figure’s stomach. Without that, the nkisi would be as impotent as a car without petrol – or a charge of electricity. 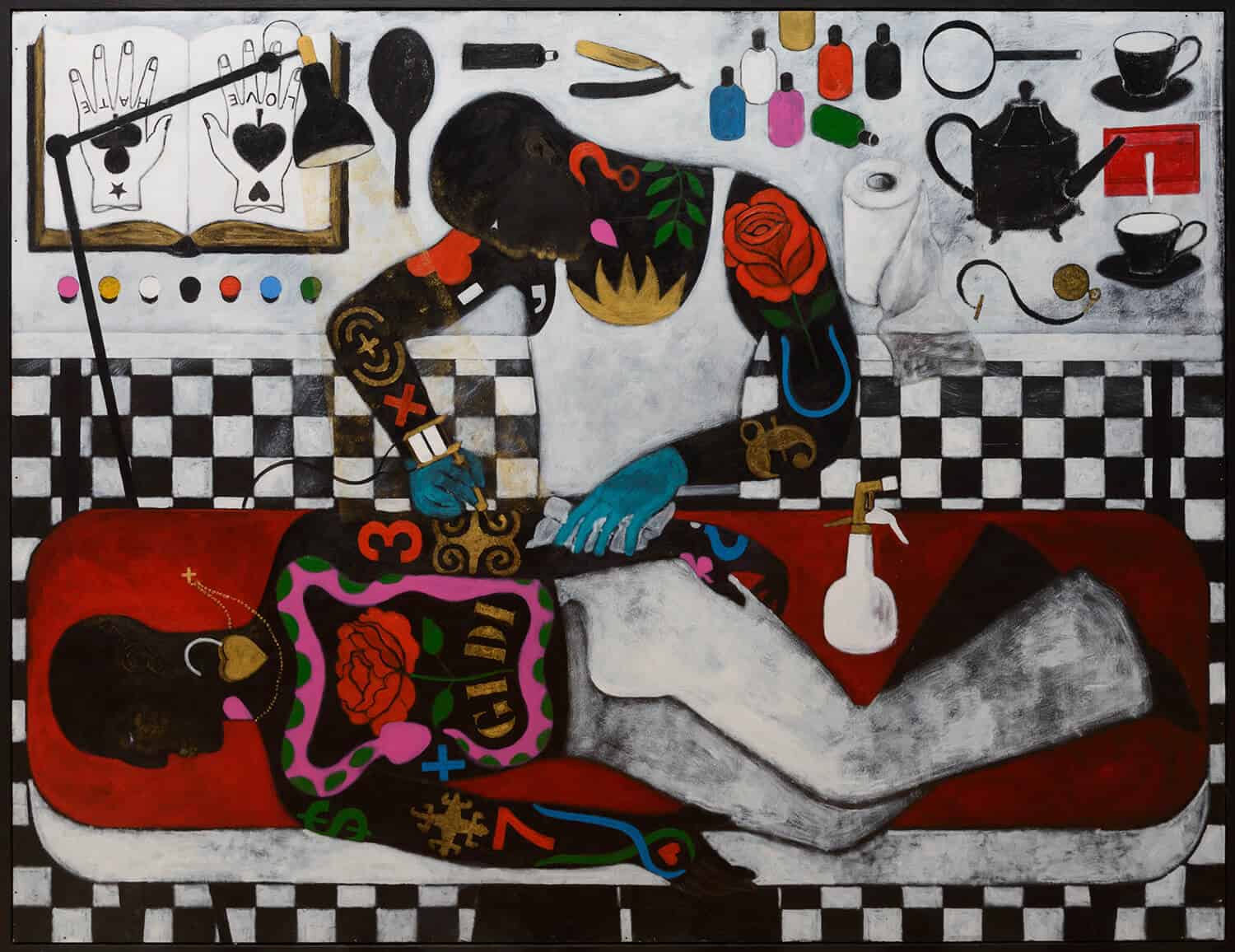 Odedina is an artist of Yoruba heritage who grew up in Nigeria, trained as an architect in Hull and subsequently settled in London before travelling to Salvador in Bahia, Brazil, where many Yoruba people were forcibly transported during the period of the Atlantic Slave Trade, bringing with them their own religious and cultural traditions which absorbed and syncretised those of the Portuguese colonialists. Today Odedina divides his time – and his studio work – between Salvador and London. This book takes the reader on a journey through Odedina’s paintings, and as we travel, we become more familiar with the everyday magic they seem to depict. In some ways, they remind me of the journey which the writer Ben Okri takes us on in his book The Famished Road, a journey seen through the eyes of Azaro, a spirit child, a journey which never leaves the small Nigerian village in which it is set. A great deal of the journey takes place in the house and compound belonging to Azaro’s mother and father or in the bar owned by Madame Koto across the road. Yet, it is a journey where the most extraordinary events take place right alongside the most mundane. As Odedina remarks: “Most magic and miracles happen to us on staircases and in doorways, in ordinary houses between brick facades.”

The cumulative impact of Odedina’s paintings… conjures the image of the Odu Ifa, a vast, constantly evolving accumulation of oral history, storytelling and image-making which represents the collective wisdom of the Yoruba people.

The cumulative impact of Odedina’s paintings – which this book so effectively presents to the reader – also conjures the image of the Odu Ifa, a vast, constantly evolving accumulation of oral history, storytelling and image-making which represents the collective wisdom of the Yoruba people. Yet Odedina, in common with Okri, is a global African, even though their respective Yoruba and Igbo/Urhobo heritages play an important part in their art. ‘I’m a different sort of Yoruba man to my father,’ says Odedina, ‘purely by virtue of where I find myself and the information I have access to on a daily basis.’ Inevitably this ‘information’ has been accumulated on the artist’s travels and in experiencing the different manifestations of Yoruba culture – and many other cultures – whether they be in Nigeria, in Salvador in Bahia or Brixton. As Adjoa Armah remarks, “In his work, nothing is ever truly out of place or time, history is never far away, and the most vital truths are sustained by decisions made in the syncretic dimension.” 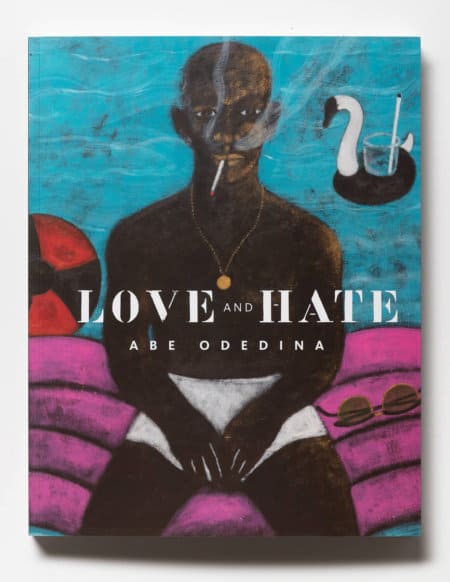 Yet, in the end, Odedina sees his work as an ongoing part of a dynamic tradition, ancient history of art-making amongst the Yoruba people: ‘I’m making art in that tradition – that’s what I want to do.’ The sense of a continuing story being related throughout Odedina’s paintings is heightened by his use of black and white as the predominant colours in his palette, against which flashes of brilliant colour burst like fireworks on a moonlit night. This book, and the arrangement of Odedina’s paintings which it offers, gives the reader a tangible sense of that progression. However, it also suggests that this movement may be circular rather than linear. We meet the artist’s array of characters at various points along the journey, though, on each occasion, we feel that we know them just that little bit better.

The end is where we start from.

Chris Spring works within a community of artists, writers and musicians at West London Art Factory. He is an artist and writer. He also serves as an Ambassador for the Africa Centre, London, on the board of the October Gallery, London, and a Patron of the Powell-Cotton Museum.