in News Articles 2013
Share on facebook
Share on twitter
Share on email
Share on whatsapp
Emma Keet paid a visit to Giovanni Ozzola’s recent exhibition ‘adrift,’ held at the SMAC Gallery in Stellenbosch. The exhibition follows on from a presentation at the South African District Six Museum Homecoming Centre in Cape Town, an exploration of light through a series of photographic, video and sculptural installations. 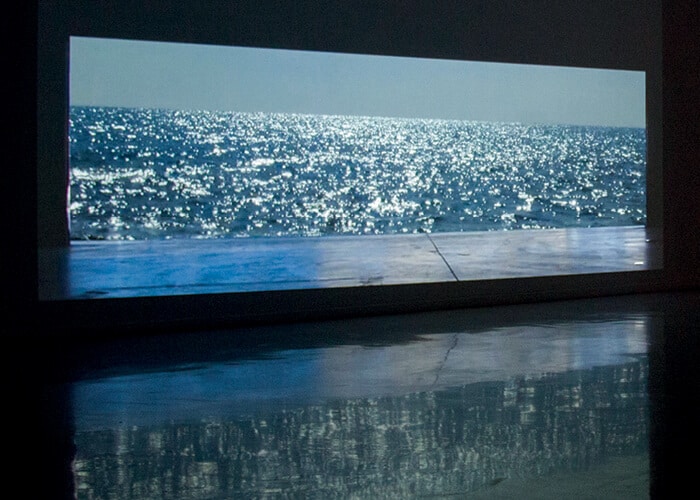 Giovanni Ozzola, Garage – sometimes you can see much more, 2009-2011. Audio/Visual, Full HD Blu-Ray, colour, 500 x 250cm, 2:39 min loop. All images courtesy of SMAC Gallery.
Giovanni Ozzola set me adrift into a quiet, contemplative space; akin to bobbing left and right, back and forth, on a gentle ocean crossing. Each work draws you in for a moment and then nudges you on to the next. Italian-born Ozzola, a multi-disciplinary artist working primarily in photography, video and sculptural installation, has exhibited worldwide. His solo exhibition ‘adrift’ follows a presentation at the South African District Six Museum Homecoming Centre in Cape Town, culminating in a spectacle of light at SMAC Gallery in Stellenbosch – ampli ed by the almost ethereal lighting within the gallery. “Light is a dominant feature in all of my works,” says the artist. “It defines and transforms, reveals and hides….” 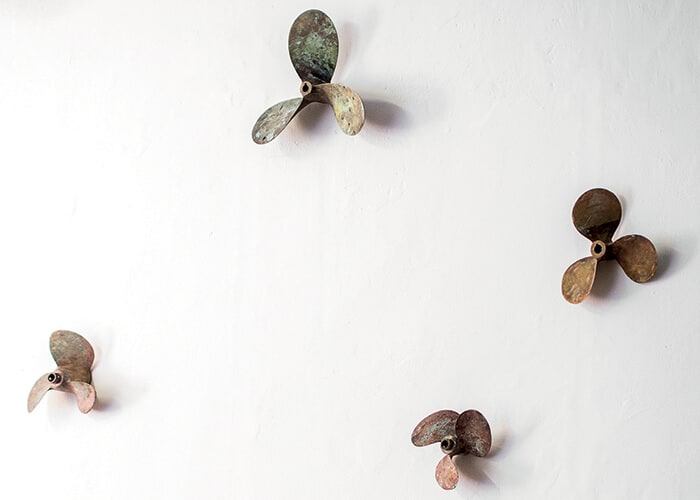 Ozzola’s work explores discovery, a universal consciousness, navigation and infinitude, both geographically and introspectively. Alight-alone (2016) is the first work the viewer comes across in the gallery, perhaps serving as a means to navigate the exhibition. This installation of found maritime propellers is a collection of moments of quiescent energy, each carrying the potential to guide in different directions. The propellers encourage the viewer to participate, an invitation evident throughout the exhibition. They are arranged in the formation of the Southern Cross constellation, a reference imperative to navigation for centuries. This knowledge has been passed on through generations, becoming a collective heritage while also illustrating an ancient human desire to orientate oneself in relation to the world. Even if we choose not to use these propellers, the potential to move is comforting.

Guided to port (left), the viewer is nudged through the doorway of About the Sky – Intuition (2015). The play of light in this photograph seems unreal. The horizon is almost tangible, lying just out of reach. There is a familiarity to this landscape; space for the viewer’s personal experience as opposed to feeling like a voyeur into Ozzola’s world. By including others’ remnants, a collective memory is suggested, illustrated by the markings on the walls, the artist recording this site and the contemplative viewer. 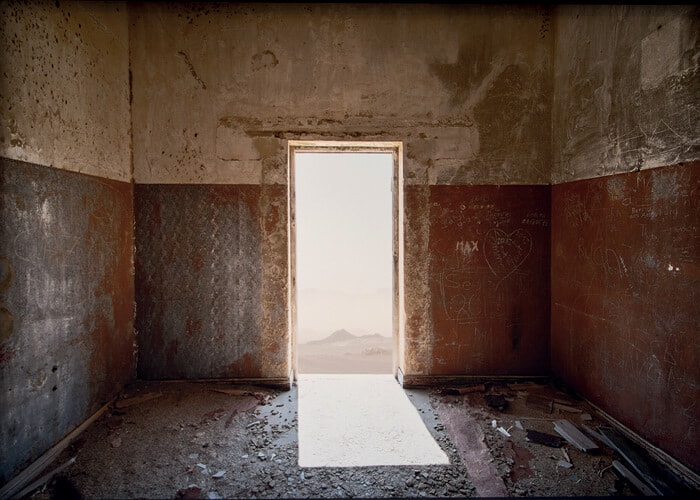 Before being led towards the horizon, the light pouring through the gallery’s window re ects on the brass bell in the middle of the room, drawing the viewer back to the present. This bell, titled Sharp-Anamnesis (2016), was found in Cape Town and bears the words ‘Amers Kerk 1952.’ The object juxtaposes past and present, becoming a symbol of communal consciousness by being the ‘parchment’ on which words – gathered from local District Six community members’ accounts of fears, dreams and hopes – are recorded. 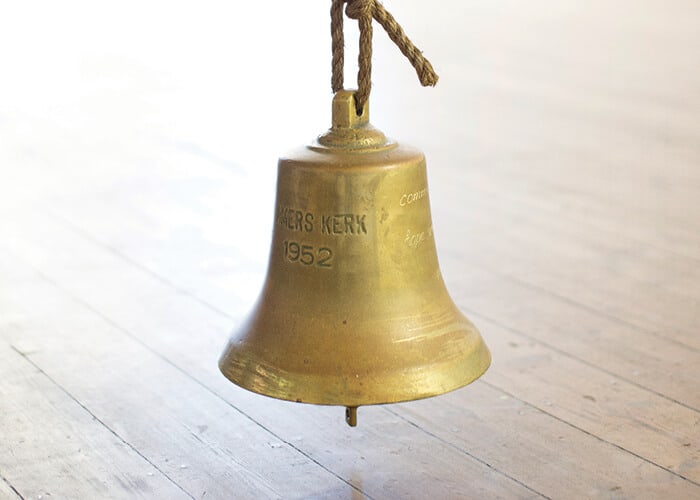 Found maritime charts in Wrecks, Hope and Pathos (2016) offer moments for quiet re ection, a chance to re-orientate before dipping into a side room to trace trajectories engraved into aluminium plates, lled with copper and bronze, in Cicatrici – verso se stessi (2015), which broadly translates as ‘Scars – toward ourselves.’ These lines trace journeys, moving towards the unknown and exploring something unchartered. Although much of Ozzola’s work explores his personal journey of self-discovery; the viewer is included, like a travel companion of sorts.

The glow of Sand, Warmth and Light (2015) draws the viewer back into the main space before moving to the video piece, Garage – sometimes you can see much more (2009-2011). Lulled by the gentle movement of waves, one is brought back to reality as the view seems to disappear when the garage door closes. Trying to keep the horizon in sight, one might bend forward or duck. The horizon suggests hope – potential discovery – similar to the propellers of Alight-alone (2016). This tightly framed view doesn’t feel claustrophobic, but is a reminder of the indissoluble tie between man and nature. 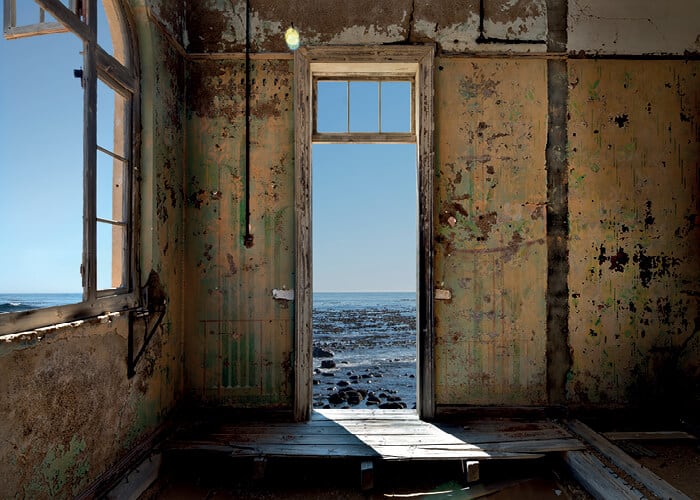 In the last room, Ghost Town with Dreams (2015) is an invitation to keep exploring, so luminous that it seems totally reasonable to walk on through the photograph, hop onto a ship and sail on to the next place.

While providing a rare moment of quiet to pause and re ect; ‘adrift’ offers South African audiences the opportunity to experience, first-hand, artwork by a widely-exhibited international artist such as Giovanni Ozzola.

Emma Keet is a Visual Studies lecturer at Stellenbosch Academy of Design and Photography. She is a joint founder of Vasiki Creative Citizens, currently in the midst of a research project involving traveling through Southern Africa, exploring the notion of creative citizenship.

Giovanni Ozzola’s ‘adrift’ is on view at SMAC Gallery, Stellenbosch, from 22 April – 4 June 2016. This article was first published in the June 2016 edition of ART AFRICA magazine, Vol. 01, Iss.04, entitled ‘The North American Issue.’