‘Africanizing the Philosophy Curricula in Universities in Africa’ by Edwin Etieyibo

in News Articles 2013
Share on facebook
Share on twitter
Share on email
Share on whatsapp
There have recently been sustained discussions regarding the need to reflect on what students are being taught at universities in Africa. These discussions have also been severely cashed out within the broader debates on transformation and curriculum development.
The University of the Witwatersrand (WITS) Philosophy Department recently hosted a workshop entitled, ‘What Are You Teaching Me? Africanizing the Philosophy Curricula in Universities in Africa’ in order to better understand some of these issues within the context of the philosophy curriculum. Dr. Edwin Etieyibo shares his insight from the workshop with ART AFRICA. 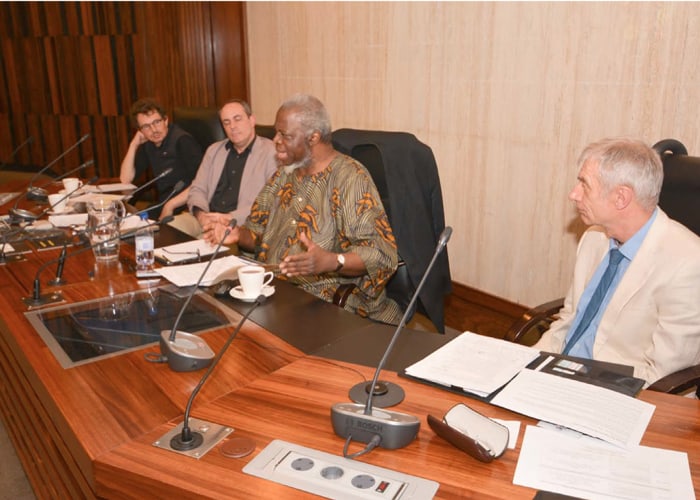 All photographs © and courtesy of: Prince Eno A Bassey.
The workshop was a daylong event that took place on Wednesday 16 September, 2015. It attracted a number of participants/facilitators from universities in South Africa and North America such as: Professor Ramose Mogobe (UNISA); Professor Lucy Allais (Wits); Professor Barry Hallen (Morehouse College, USA); Dr. David Hornsby (Wits); Dr. Edwin Etieyibo (Wits); Professor Ifeanyi Menkiti (Wellesley College, USA); Professor Thaddeus Metz (UJ); Professor Murali Ramachandran (Wits); Professor Pedro Tabensky (Rhodes); Professor Samantha Vice (Wits); Dr. David Martens (Wits); Professor Bruce Janz (University of Central Florida, USA). The key subthemes, questions and topics that the workshop explored and interrogated included:
The first topic was facilitated by Dr. David Hornsby. Hornsby’s presentation focused on the theoretical framework for discussions on curriculum transformation. Some of the highpoints of the discussions relate to the need to acknowledge that the student body and universities have changed and for transformation to work with those changes. Some of these changes have to do with the way in which information is accessed previously (which is hierarchical, prescribed and known) and how it is accessed now (which is random, chaotic and uncertain). Other changes that transformation has to deal with include the massification of universities, decreased public funding, performance management and managerialism.
The next session focused on Why ought the philosophy curricula in universities in Africa be Africanized? This session was facilitated by Dr. Edwin Etieyibo and the central issue that was interrogated concerns our moral obligations in respect of Africanization of the philosophy curricula. Etieyibo used Amanda Fricker’s notion of ‘epistemic injustice’ in her book, Epistemic injustice: power and the ethics of knowing to explore our moral duties to transform, from both a Kantian and Utilitarian perspectives. The emphasis of the presentation is that an epistemic injustice (in the form of testimonial and hermeneutical injustices) is committed against individuals and groups (minorities) when the curriculum is neither representative enough of their perspectives and experiences nor robustly speaks to them. The point is that curriculum must ‘speak to students’ in a way it does not now.
During discussions the point about what it would mean for the curriculum to ‘speak to students’ was raised. Various ideas were explored including the point that students have to be able to relate to the content or the way of teaching it (if the curriculum is to speak to them). One recurring theme throughout is that a curriculum that speaks to students brings other worldviews into the curriculum which will enrich philosophy. It was acknowledged that since not all views are worthwhile students have to be an integral part of discussions and decisions regarding views and issues that have to be included. 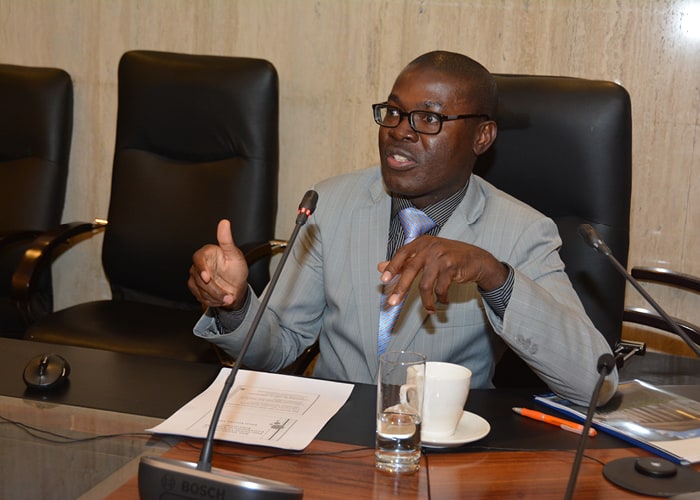 All photographs © and courtesy of: Prince Eno A Bassey.
The workshop then moved on to considering What does it mean to Africanize the philosophy curricula? which was facilitated by Professors Mogobe Ramose, Samantha Vice and Murali Ramachandran. Ramose and Vice both emphasized that race needs to be an explicit part of the discussion on transformation, and that we must also consider the teachers of philosophy, not only the students. The point of emphasis is that it is not enough to transform the content of the curricula; we must also be prepared and ready to transform those that transmit the content in the classroom. In other words, enough space must be provided for students to be taught by teachers that share some similar or analogous background and experiences with them. The discussions around the issues highlighted by the facilitators raised a number of questions which couldn’t be sufficiently addressed at the workshop. These questions include: Who teaches and what do they teach?’ How do white philosophers and non-minority teachers fit into the transformation agenda? Do they have a place at all? What – if anything – counts as uniquely African?
The third item on the agenda, is it possible to Africanize the philosophy curricula in universities in Africa? / What are the prospects, problems and challenges of Africanizing the philosophy curricula in universities in Africa? were taken up by Professors Barry Hallen, Pedro Tabensky, Thad Metz, and Lucy Allais. While Hallen spoke about his experiences in Nigeria, and the challenges he faced in teaching African Philosophy, Allais discussed Western philosophy’s ‘conception of itself’. Allais’ point is that if African philosophy tries to define itself in opposition to ‘Western philosophy’ it will confine itself to a very narrow space, and that there are no solely ‘Western’ ideas. Her particular point of emphasis is that we should not accept Western philosophy’s triumphalist version of itself. As for Janz, he argued that the proper object of philosophy is the ‘concept’, which is always rooted in a particular time and space. ‘Activated’ concepts, he notes, have traction in a community, and students should try to take philosophical concepts back to the community. Tabensky cautioned about the Africanization project and worried that ‘Africanization’ risks relying on an essentialist version of ‘African’, which sees encounters with others as diluting and polluting. African philosophy should cultivate the confidence to encounter and use other influences. Like Janz, he thinks no place is neutral, and that we must develop an endogenous philosophy that speaks to current circumstances. In that way, we can work to dismantle power. Various issues were explored in relation to the practical challenges of Africanizing the curriculum. These include: the reliability of approaching a topic as ‘African’; the worry of generalizations since there are many cultures in Africa; the different models of ‘Africanizing’ (from having dedicated African philosophy courses to integrating it into all/ most courses); the problems of Africanizing subjects like philosophy of science and logic. 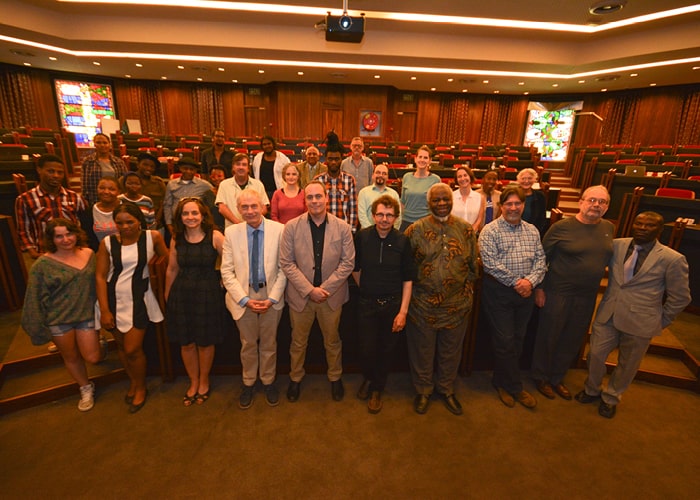 All photographs © and courtesy of: Prince Eno A Bassey.
The fifth session of the workshop was on What subjects, topics, and issues should form part of the content of an Africanized philosophy curriculum? which was facilitated by Professors Ifeanyi Menkiti and Thad Metz, and Dr. David Martens. Menkiti suggested topics that can be enriched by African thinkers from Sandra Harding, The curious coincidence between African and feminist philosophies to topics such as persons and community, time, ancestors and spiritual heritage. He also emphasized the importance of using literature as a source of philosophical ideas (for example Achebe, Armah, or Soyinka). Martens read and commented on a passage by Kwasi Wiredu and highlighted the need to set the bar high, and ask about our aims in teaching African philosophy. As for Metz, he offered his bibliography of African philosophy as an aid to incorporating African philosophy into the current curriculum. One important point of discussion is that there is the need to incorporate other media besides texts in the curriculum.
By way of concluding it is worthwhile to highlight some of the substantial issues and questions that arose throughout the workshop. Among these are, What do we take to be ‘transformation’? What counts as African/to Africanize? Do we conceive of philosophy as local (‘philosophy in place’) or universal? Is ‘transformed’ philosophy simply ‘doing good philosophy’? Are whites ‘the problem’ with transformation? What is their role in South African philosophy? What role does languages of instruction play in the Africanization project? The workshop proved to be enlivening, engaging, enriching and beneficial for participants. A couple of important suggestions that emerged from it is that a report of key discussions and findings should be written and presented to various stakeholders; and that a proposal should be submitted to the various stakeholders in respect of concrete ways to Africanize the philosophy curricula and to educate people about African philosophy.
Edwin Etieyibo, PhD teaches at the Department of Philosophy, University of the Witwatersrand.