in News Articles 2013
Share on facebook
Share on twitter
Share on email
Share on whatsapp
Gerald Machona has chosen the Cape Town Art Fair to create a performance piece that invites the audience to critically engage with currency and its value. Central to this performance will be an attempt to explore the devaluation of currency through his character, Ndiri Afronaut (a space suit made of money), and his artistic oeuvre of decommissioned currency. 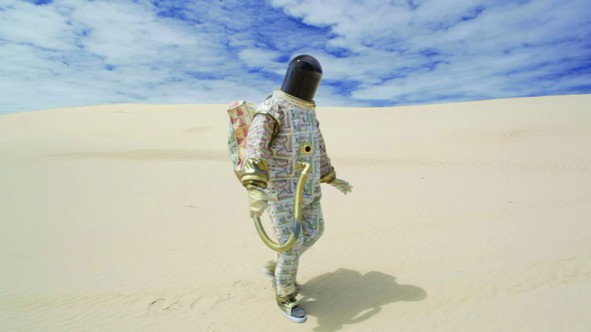 Gerald Machona, ‘People from Far Away’ HD Projection, 15 minutes. Edition of 5 + 2AP. Image courtesy the artist
The character Ndiri Afronaut performs in an astronaut’s suit meticulously stitched out of decommissioned Zimbabwean dollars and depicts Machona’s linking of history and contemporary trends of African diasporic migration on the continent and specifically, most recently, the migration of Zimbabwean nationals into neighbouring SADC countries and abroad, following the country’s political and economic collapse. This extraordinary artwork will be ‘live’ at the Cape Town Art Fair on Saturday 01 March 2014 at 13h30.

While South Africa hosts the largest population of these Zimbabwean nationals living in the diaspora, in May of 2008 they were among the foreign nationals persecuted by the xenophobic attacks. It was reported that people were targeted through a process of profiling that assumed authentic South Africans are lighter in complexion or fluent in an indigenous language; this resulted in 21 of the 62 casualties being local citizens. Such beliefs have complicated who is considered an ‘insider’ and ‘outsider’ in South African society – pitting ‘native’ against ‘alien’ and perpetuating an exclusive sense of belonging that is reminiscent of Apartheid doctrine.
Courtesy of Wired Communications