in News Articles 2013
Share on facebook
Share on twitter
Share on email
Share on whatsapp
To honour Heritage Day on the 24th of September Ama Culture revisits the stories of individuals and products that have shaped South Africa’s cultural landscape, starting with one of South Africa’s best old Master: Jacob Hendrick Pierneef.

Photograph courtesy of La Motte.
Jacob Hendrick Pierneef is considered one of the best of the old South African masters, producing dramatic paintings mainly of the South African landscape using light, colours, lines and shapes in a unique style. One of the highlights of his career is the production of 32 panels for the then new Johannesburg Station building that can currently be seen at the Rupert Museum in Stellenbosch.
Jacobus Hendrik Pierneef was born in Pretoria in 1886, the year that Johannesburg was founded. His father Gerrit, an immigrant Hollander, built the first house in the new town (in Market Street). His mother was the daughter of a Trekker. JH Pierneef went to the Staats Model School in Pretoria, where he first displayed great talent as a drawer. One of his teachers inspired his love for nature and his interest in rock formations.
During the Anglo-Boer war the family was forced to leave and went to the Netherlands. In 1900 they stayed first in Hilversum where Pierneef worked in a paint factory after school and learnt paint mixing techniques; he also attended night classes in architectural drawing. In 1902 they moved to Rotterdam where he studied for a year at the Rotterdam Art Academy, an was given the opportunity to be exposed to the works of the Old Dutch masters and to visit Rome.
They returned to South Africa when Pierneef was 18. Pierneef wanted to study architecture but instead had to start working as his father was experiencing financial difficulties. His godfather, Anton van Wouw, encouraged him to pursue his artistic studies; this led to Pierneef’s first exhibition as part of a group with Anton van Wouw and Hugo Naude in 1902.
Between 1905 and 1908 he studied under Frans Oerder. In 1908 he studied etching and wood engraving under Irish artist George Smithard. In 1910 he married Agatha Delen, 12 years his senior and in the same year he sold his first oil painting, Meintjies Kop, to Emil Schweikerdt for R6. 30. In 1912 he received an appointment at the State Library, Pretoria; working there by night and painting by day. 1913 Marked the year of his first solo exhibition in Pretoria, highly praised by the critics, it was a great encouragement for him to work even harder.
In 1917 JH Pierneef was elected a member of Society of South African Artists. During that time he drew illustrations for Die Brandwag and executed many linocuts, (previously described as woodcuts). In 1919 he also started teaching drawing at the Pretoria College and Heidelberg Normal College while touring and exhibiting extensively.
His breakthrough came in 1923, when he could finally make a living from his art. This was also the year he visited Namibia, sketching extensively for paintings which would later be completed in his studio. It is said that some of his best work came from this period. As he was still experiencing financial difficulties he had to work for a Mr. Johan Schoeman at the Hartebeespoortdam on an advertising project to sell the land around the dam which led him to meet his second wife, May Schoep. 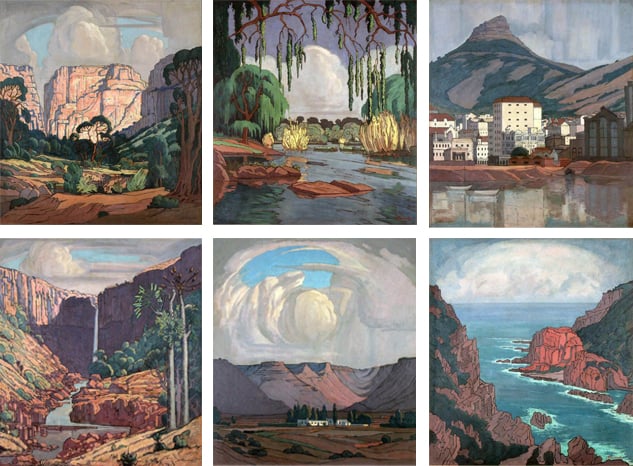 Clockwise: Rustenburg Kloof; Vaal River, Parys; Lion’s Head, Cape Town; Waterval Boven; Karoo; Knysna Heads. Images courtesy of The Rupert Museum.
In 1925, a new exhibition in Johannesburg gave Pierneef a boost and encouraged him to exhibit and promote his work in the Netherlands. The subject of the Bushmen had attracted a lot of interest. The return to South Africa marked a new era in his painting, which saw a new maturity and a very distinctive style and vision. The Dutch artist van Konijnenburg’s philosophy had a particular influence on him at that time. In 1928 he ventured into a more abstract painting which was rejected by the critics, pushing him to go back to his ‘old’ style.
In 1929 Pierneef was commissioned to paint 32 panels for the interior of the then new Johannesburg Railway Station, regarded as some of his best work, they can be seen today at the Rupert Museum in Stellenbosch. In 1933 he was commissioned to do seven murals for South Africa House, the South African embassy in London. Back in South Africa and painting again, he had major exhibitions in Cape Town and Pretoria in 1935. He died in 1957.
Pierneef’s work can be seen worldwide in many private, corporate and public collections, including the Africana Museum, Durban Art Gallery, Johannesburg Art Gallery, King George VI Art Gallery, Pierneef Museum and the Pretoria Art Gallery.
The Pierneef legacy has been further brought to life by La Motte wine estate in Franshhoek dedicating their museum and naming their restaurant after South Africa’s old master. This follows a relationship started between the late Pierneef and Dr Anton Rupert who purchased for each of his children a set of 128 prints, a limited edition of the linocut collection.
The story has been revived by Hanneli Rupert-Koegelenberg who had the opportunity to purchase from Marita Pierneef, his daughter, a priceless collection of drawing, paintings and personal items belonging to him. Marita was very excited about the opportunity to see this unique collection, a testimony to her father’s lifetime achievements, going back to South Africa, a country he was passionate about.
La Motte
Address: R45 Main Rd, Franschhoek 7690
Phone:021 876 8000
Hours: 9:00 am – 5:00 pm
The Rupert Museum
Address: Stellentia Avenue, Stellenbosch
Phone: 021 888 3344.
Hours : 09h30 – 16h00