The heart of the Cederberg is home to two very different forms of art: ancient Bushman Rock Art and award-winning Cederberg Wines. Christine Lundy explores the irony of the evolution of society and farming techniques that led to the production of these world-class wines, but might also have contributed to the disappearance of the San tribes, the rock artists as well as some of the wildlife we admire today on the rocky overhang. 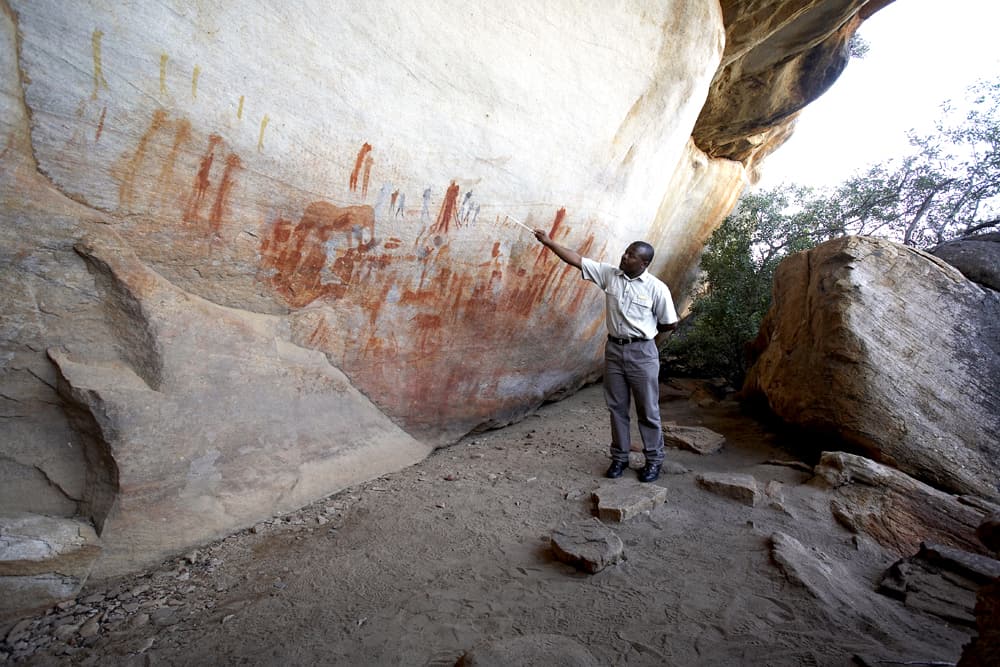 The San, also referred to as Bushmen, are the hunter- gathering indigenous people of Southern Africa. They are one of fourteen existing ‘ancestral population clusters’ from which all known modern humans descend. Researchers say that the Cederberg was inhabited more than 30 000 years ago, some say even longer. The evolution of civilization and especially colonization in Southern Africa led to the complete disappearance of these tribes in the Cederberg and nearby area by about 1900. The disappearance was a result of violent conflict and European diseases  such as small pox. Before this,  elephants, lions and black rhinos also roaming in abundance, as did the now extinct Quagga and herds of antelope.

The Bushmen left an extraordinary and mysterious legacy that we are still translating today. Their Rock Art gives us a glimpse of their history, their way of life and the world surrounding them. Painting was a way to record events that happened in their lives, as well as stories and traditional beliefs. The arrival of colonization is depicted on their walls as one can decipher drawings resembling wagons and foreign colonizers. According to Thomas Dowson “a lot of rock art is actually in symbols and metaphors.” The San also depicted non-human beings, hunters and half-human half-animal hybrids. Each drawing imparts a specific message telling a different story and is signed by the unknown artist with a blood red handprint. The San used different coloured stone mixed with fat, animal blood and plant juice to draw. Paintings were done with a brush fashioned from animal hairs or a small feather. We are very fortunate to still see them today even if not all the colours are still visible.

Some unique examples can be seen at the Bushmans Kloof Wilderness Reserve and Wellness Retreat, custodians of over 130 unique Rock Art sites as old as 10,000 years. Since its founding by the visionary Mc Adams family in 1991, Bushmans Kloof has been dedicated to protecting this exceptional legacy; as such in 2004 they have been awarded the status of South African National Heritage Site. The same year the Tollman family Trust acquired the property and taking it to new heights. One of the most important sites according to Bushmans Kloof is Bleeding Nose Shelter, where the paintings stand out in chiaroscuro against white sandstone. They say “this was probably a ceremonial site …subjects include eland, small antelope, and rare paintings of birds. A variety of human figures are depicted standing, dancing and shooting with bows. This site takes its name from a painting of a man in the shamanistic ‘trance’ state, with blood pouring from his nose, joined to his companions by mystical lines of power.”

On the farming side, around mid- 1800s, the Nieuwoudt family settled in Cederberg. Their descendants, now in their sixth generation, moved to the Dwarsriver farm also known as Cederberg Private Cellar and Sanddrift Holiday resort. On their wine label sits proudly the Cederberg tree. The Cedar tree (Widdringtonia Cedarbergensis) is an emblem of the region and grows between the rocks near the mountain peaks. The Cedar tree takes thousands of years to reach maturity and is now also nearly extinct. Bushmans Kloof together with the Botanical Society and Western Cape Nature Conservation have however started to reintroduce it. Cederberg Wine, a key player in the tourism industry has also been instrumental in the establishment of the Cederberg Conservancy and they are also a BWI champion, a biodiversity and wine initiative aiming at the protection of the environment.

The Cederberg, only few hours away from Cape Town, offers a world of wonders. All of them couldn’t be listed in this article so following the San’s footsteps, it is your turn to discover.