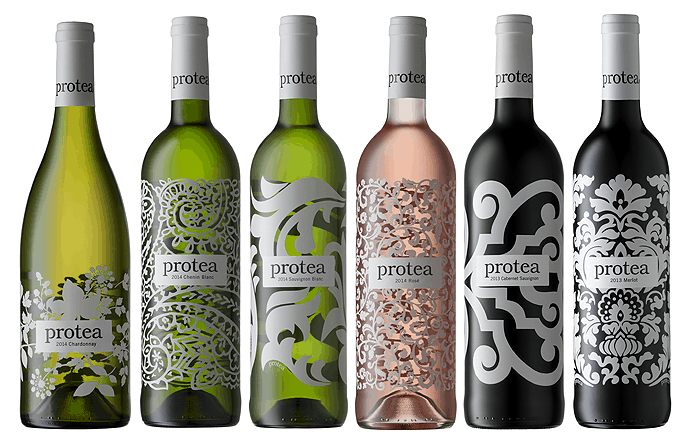 ABOVE: Protea Wine Range by Anthonij Rupert Wyne. Image courtesy of Anthonij Rupert Wyne.
In September, Anthonij Rupert Wyne released their new Protea wine range adorned with distinctive new packaging by Mark Eisen, a world-renowned fashion designer born in South Africa and living in New York. Famous for his minimalist and modern design aesthetic, Eisen has designed an outstanding range of Cape-inspired prints to showcase each wine. What makes this range even more unique is its ‘upcycling’ potential. Each label is printed with heavy metal- free ink, making the bottle 100 % recyclable. According to Gary Baumgarten, Managing Director of the Anthonij Rupert Wyne, when the concept was proposed to Anthonij Rupert Wyne in 2011, Johann Rupert knew immediately that it was a unique yet daring opportunity. Initially, only two wines were launched in the US in 2012. Thanks to the quality of the wines and the design concept, the sales tripled in just a couple of years leading the Anthonij Rupert Wyneto launch a bigger range in South Africa.
Honoring the Cape’s heritage is not a new concept for Anthonij Rupert Wyne. The Cape of Good Hope range was their first initiative to preserve history in the vineyard, a celebration of Cape Wine culture. In 2006 Johann Rupert, chairman of the Swiss-based luxury-goods company Richemont, as well as of the South Africa-based company Remgro, initiated the country-wide search for all vineyards older than 40 years. The Cape of Good Hope project encourages farmers to maintain these vineyards as pieces of history. Mr Rupert adds to the Rupert family’s tradition as they are well known for their contributions to the preservation of other fields such as iconic art and architecture.
The Protea range focuses on two other areas of Cape Heritage. The first is The Cape Floral Region, already classified as a UNESCO World Heritage site.  The Cape Floral Region, defined as the smallest of the six recognized floral kingdoms of the world, “is an area of extraordinarily high diversity and endemism, and is home to more than 9 000 vascular plant species, of which 69 percent are endemic.” The other area, The Cape Wineland Cultural Landscape is also in the process of becoming a heritage site. Hannetjie du Preez, Chief director of Cultural Affairs for the Western Cape, defines this landscape as follows: “The Cape Winelands Cultural Landscape developed at the beginning of globalization, (has been) enriched by influences accumulated from four continents (Africa, Asia and the East Indies, Europe and North America.)”
The name Protea already marks the reference to the floral kingdom but Mark Eisen has captured another dimension in the Protea Shiraz and Chardonnay label design, using ‘the Chrysanthemum garden’ for the Shiraz and ‘the French garden’ for the Protea Chardonnay. French heritage is also showcased in the Protea Sauvignon Blanc, whose label features Parisian plaster which today influences prints, fabrics and wall paper. These are the same references for the Protea Merlot with its ‘Regal Wallpaper.’ The Protea Rosé, a fresh and elegant bottle and wine refers to both French and Dutch heritage with the theme ‘Floral Ironwork,’ “inspired by the floral iron and metal works created by the early Dutch and French settlers that adorn the Cape Vineyard homesteads” says the creator Mark Eisen. The Protea Cabernet Sauvignon honors the ‘Cape Dutch Gables’. Lastly, one of my favourites: the Protea Chenin Blanc with a ‘Paisley Print.’ Eisen says that this wine is “lively and bright” and he wanted to capture these characteristics in its label design. The paisley print is a reference to the Eastern influence in South Africa, a result of the trade and travel made by the Dutch East India Company. 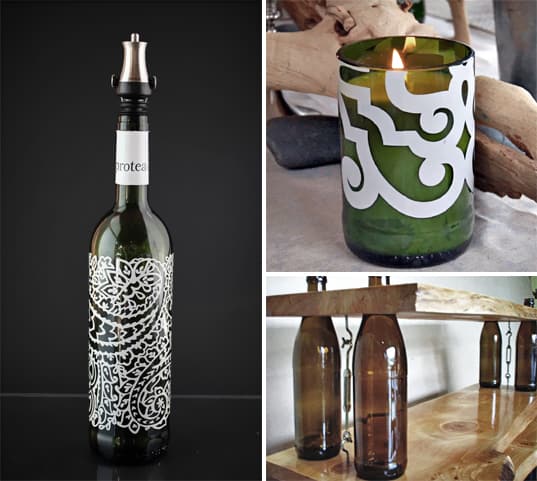 ABOVE: Upcycled objects made from Protea wine bottles. Image courtesy Anthonij Rupert Wyne.
One of the reasons why Mark has achieved such a tour de force with this range may be his own affinity to wine and glass. Owner of Normandie wine estate in Franschhoek, he has himself produced unique wines, which can only be tasted and purchased from exclusive outlets. Mark is also about to release a unique glass collection which marries form and function.
Anthonij Rupert Wyne encourages you to upcycle your Protea bottles, a few examples can be seen on their site: http://www.rupertwines.com/upcycling.php and they invite you to share your own upcycling creations! They themselves have developed a range of glasses and vases which are available for purchase at their tasting room.
Gary Baumgarten expressed that Anthonij Rupert Wyne are driven by innovation, and that we can expect yet another surprise from the Estate in a few months time.