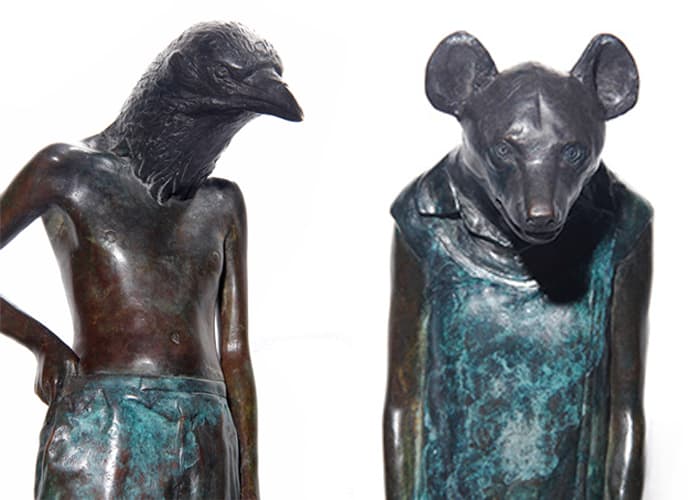 LEFT TO RIGHT: Elizabeth Balcomb I am You; Survival (2014)

Art plays an important part in the cultural fabric of our nation and competitions serve to encourage greater creativity across age, gender and education, as well as to acknowledge the wealth of talent that we have in our country. Sasol has emerged as one of the leaders in the continued support of arts and culture in South Africa.

The overall winner for 2014 is Elizabeth Jane Balcomb, with her submission, ‘Weighed and measured series’. Animal/human figures in some art traditions symbolise animal-like characteristics in humans, such as aggression, passivity or greed, that are often seen as negative. Balcomb’s pieces, like the therianthropic figures in San paintings, open a window between the quotidian and spiritual worlds, between the realms of the living and the dead. They explore the relationship between human and animal worlds, suggesting that identity is fluid, mysterious and beautiful, and that consciousness is a common condition, not the sole attribute of human beings.
Therianthropes have been part of humanities myths for thousands of years, and hold a very deep response.  Balcomb’s studies in nature conservation led her to focus on this phenomenon, believing that they are the symbol of a culture which is becoming increasingly awake to our environment.
The hyena in Survival is the symbol of a matriarchal society who is reflected as having a less desirable, almost corrupted form of power. Seen as a desperate edge-dweller, who uses devious ways to survive, she has to fight to prove her worth to merely live. The model for the piece, I am You, is Balcomb’s son. According to her, the family unit is the nucleus of humanity, and the mothers’ role within it is pivotal. She says, “While making him, I reflected upon my time spent being his mother, my instinct to protect, and the fact that in the long term, failure in this regard is inevitable.”
The Sasol New Signatures 2013 winner, Dot Vermulen, is is showcasing her first solo exhibition at the Pretoria Art Museum from 4 September to 19 October 2014. Titled ‘Posting Presence’, Vermeulen’s exhibition explores how people deposit in public spaces, using digital impressions. Through her exhibition, she depicts various everyday public spaces that one would not ordinarily take note of, and portrays the interaction between these spaces and bodies. As part of her prize, Elizabeth Balcomb will host her own solo exhibition in 2015.