in News Articles 2013
Share on facebook
Share on twitter
Share on email
Share on whatsapp
As the most established ranking within the artworld, contemporary art magazine ArtReview’s Power 100 provides a unique snapshot of the contemporary art scene as it stands today. This ranking of figures is compiled by an invited international panel, with entrants judged on their international influence over the production of art and their contribution to the artworld during the past twelve months.
ART AFRICA would like to congratulate all those who made it onto the list, with special mention going to Okwui Enwezor (who made the Top 20 this year at #17), Roselee Goldberg (#57), Koyo Kouoh (climbing to #73) and William Kentridge (a new entry at #81). Well done to all of you! 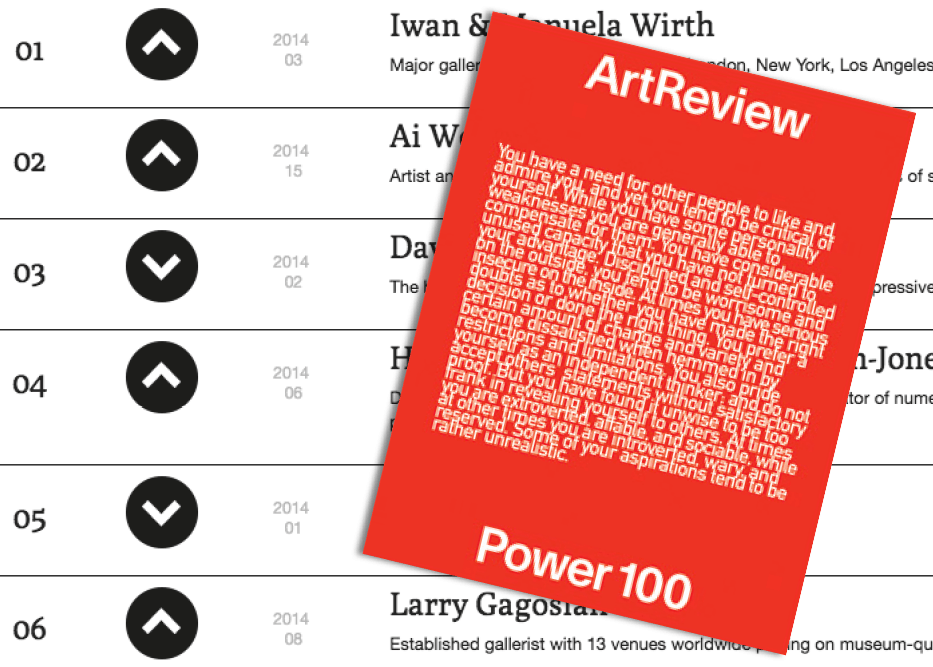 Iwan and Manuela Wirth, the copresidents of Hauser & Wirth, are number one in this year’s edition of the ArtReview Power 100. The annual ranking of the contemporary art world’s most influential players hits newsstands on Thursday 22 October.
In the 14 years ArtReview’s power list has been running, the Wirths are only the second art dealers to top it. While the first, Larry Gagosian (number one in 2004 and 2010, no 6 this year) may continue to enjoy the highest estimated revenues of any gallery operation, the Wirths’ increased influence stems in part from what they have done to change the model of selling and promoting art.
As big art dealers are becoming ever better at selling art for high prices, and as collectors want to see themselves as more than just anonymous purchasers (this year’s list also includes several collectors-turned-private-institution-owners, including Eli & Edythe Broad at no 28, Bernard Arnault at no 38, and Dasha Zhukova at no 97), the husband-and-wife-team understand that selling art objects isn’t the whole story – the well-off want to be sold a lifestyle. So in addition to their more conventional gallery branches in Zürich, London and New York, last year saw the opening of Hauser & Wirth Somerset, just outside the little West Country town of Bruton. It’s a gallery, but it’s also a ‘multi-purpose art centre’ in which collectors can sample the country life (fitting for our Downton age) and a programme that covers everything from architecture to landscape design.
Next March the Wirths open Hauser Wirth & Schimmel in Los Angeles, a 9,300sqm space helmed by one of LA’s most influential museum curators, Paul Schimmel, with the promise of a museum-style education programme, bookstore, bar and restaurant, backed up by the gallery’s representation of key LA artists such as Paul McCarthy and the late Mike Kelley.
This year’s list, compiled by a 16-member international jury, also reflects the continuing internationalisation of contemporary art. Cameroonian curator Koyo Kouoh, one of the most active voices in the promotion and dissemination of art from African countries, rises to no 73 ; Lebanese curator Christine Tohme reenters the list (at no 74), not just for her position as curator of the 2017 Sharjah Biennial, but also in recognition of her influence within the Lebanese art scene; and Hyun-Sook Lee, the founder of preeminent South Korean gallery Kukje, enters the list for the first time at no 82.
Indian artists and founders of the Kochi-Muziris Biennale Bose Krishnamachari and Riyas Komu are also new entries (at no 86), as is South African artist William Kentridge (no 81) and Bangladeshi collectors Nadia and Rajeeb Samdani (no 98). The list also recognises that there is an artworld beyond the monied elite, profiling those who find power in art that performs a critical, political or activist service, including artists Hito Steyerl (no 18), Theaster Gates (no 38) and Rick Lowe (no 89).
Accompanying the Power 100 list are essays by Nicolas Bourriaud, until recently director of the École Nationale Supérieure des Beaux-Arts in Paris, on the state and future of the art school; and Timothy Morton, one of the key proponents of the hugely influential ‘object-oriented ontology’ school of philosophy, who looks at the emergence of ‘the Anthropocene’ and its relation to contemporary art.
Patrizia Sandretto Re Rebaudengo and Peter Brant each tell ArtReview what motivates their respective involvements in contemporary art as collectors and influencers; Kickstarter founder Yancey Strickler talks about the future of art funding as he sees it; and Chinese cultural theorist Sun Ge discusses whether, in the age of the global artworld, there is the possibility for an Asian art that isn’t defined by Western aesthetics. Singapore-based artist Heman Chong created the magazine’s cover and a series of additional artworks running throughout the issue.
You can view the entire list here.
Founded in 1949, ArtReview is one of the world’s leading international contemporary art magazines, dedicated to expanding contemporary art’s audience and reach. Aimed at both a specialist and a general audience, the magazine and its sister publication, ArtReview Asia (launched in 2013), feature a mixture of criticism, reviews, commentary and analysis alongside commissioned artist projects and accompanying guides and supplements.
ArtReview publishes nine issues a year, including two dedicated to particular areas of focus: the Power 100 in the November issue and Future Greats in the March issue. It is distributed throughout Europe, the Americas and Asia. ArtReview Asia publishes three issues a year and is distributed throughout the region and in selected outlets elsewhere.