in News Articles 2013
Share on facebook
Share on twitter
Share on email
Share on whatsapp
#ANOTHERLIGHTUP leverages street art with the capacity of crowd-funded community engagement.
The project, which will run for 6 months, aims to fund the installation of a streetlight system into one of Cape Town’s more dangerous neighbourhoods, empowering individuals with the potential to be active agents in change.
Design Indaba Trust, Faith47 and Thingking have teamed up to create a mural that seeks to create a community level change through the duality of art-based social impact. 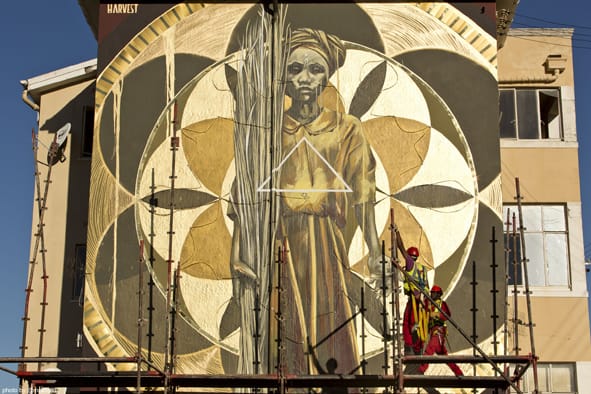 ©ROWAN @MAKHULU
This new collaborative multi-story artwork ‘Harvest’ provides a visual feedback loop for those who view it; the wall lights up at night each time enough money is raised for one new light to be installed in a pathway of the informal settlement of Monwabisi Park in Khayelitsha, through the organisation VPUU (Violence Prevention through Urban Upgrading).
The intricate lighting pattern created by Thingking is an artistic endeavour that also serves as a reminder that there are communities in the city that lack the luxury of light, a major public safety concern. 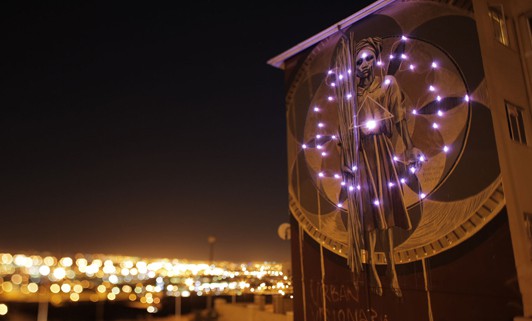 photo by @makhulu_
Tweet #ANOTHERLIGHTUP to help promote the project and turn the lights on momentarily.
When enough funds are raised for another light in Monwabisi the mural lights up for the evening.
The City of Cape Town supplies Monwabisi Park with public water taps. The ‘emtonjenis’ (public tap spaces) have become communal gathering areas but are a target for crime.
This project aims to raise funds for streetlights that can improve a 700m pathway between public taps and other better-lit areas. Installing lights is one impactful move towards creating a safer space.
All donations of R5000 or more will receive a limited edition, signed print of the wall.* Donations can be made at www.anotherlightup.com.
For more information contact
weare@thingking.co.za
www.anotherlightup.com