In Faith47’s exhibition ‘Aqua Regalia – Chapter II’ at Jonathan LeVine Gallery – her debut solo show in New York – the artist’s signature grisaille renderings of animals, figures and intimate gestures mingle with an expansive collection of objects gathered in her home country of South Africa as well as during travels throughout Asia, Europe and the Caribbean. 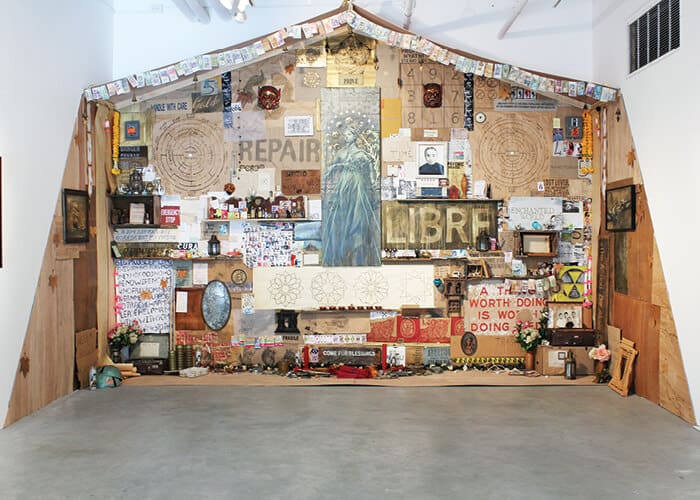 The immediate draw is a large shrine-like installation positioned at the back of the gallery, in which she has carefully arranged an immersive display of objects both sacred and profane: votive candles, religious diagrams, amulets and prayer banners uplift a variety of jetsam such as hand-scribbled signage, old photographs, adverts for call-girls and the décollage of city walls. Already betraying a Duchampian impulse to give sanctity to the commonplace, Faith47 assembles fetishes and holy images that further resonate with themes of superstition, healing and the nature of faith itself – in other words, humanity’s psychic drives in the midst of uncertainty and fear. The artist’s drawings and paintings invite similar readings, especially those that feature figural studies and variations of hand gestures, calling to mind the iconography of South Asian mudras or the choreography of Christian prayer. 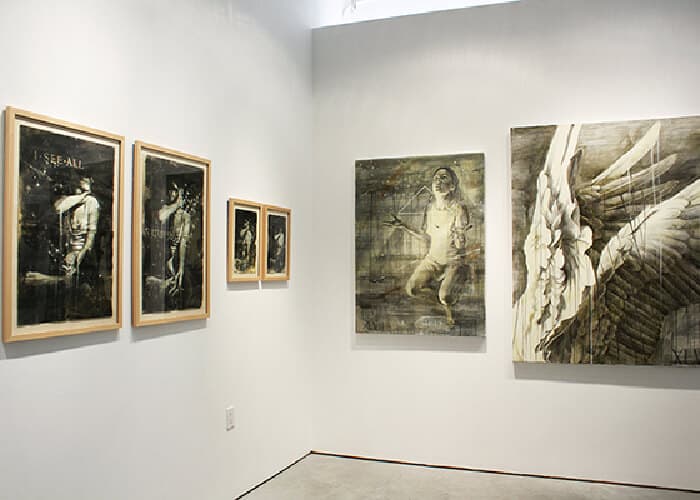 Constructed from recycled plywood and cardboard, the display is reminiscent of a temporary or abandoned shelter, a fitting ambience for an artist who typically operates in public space. Faith47’s murals have been seen on walls and billboards from Soweto to London and, more recently, Brooklyn, where a piece intended to protest the recent jailing of an Iranian artist was unexpectedly vandalised; its universalist symbolism regrettably tarnished by the Islamophobic sentiment now sweeping across America (the mural depicted a veiled woman whose lips were absent, signifying her censorship).

Beyond the powerful sense of urbanism invoked within a white cube space in Chelsea, it is always interesting to witness how a street artist translates the somewhat improvisational nature of their work into gallery contexts. As such, the most rewarding works in the exhibition may have been Faith47’s mounted and framed collages, in which varied articles of printed matter are pressed flat into tight, two-dimensional compositions – a stark contrast to the brimming installation at the back. Despite the exhibition’s overall likeness to the play of the unconscious, works such as Reciprocal Altruism, Merci Ste Mere and The World’s Last Mysteries are not as reminiscent of Dada and Surrealist collage, but recall, instead, the post-war shift to flatbed pictorial space, as identified by Leo Steinberg in the art of Robert Rauschenberg and later Pop artists. As Steinberg understood it, this impulse to reenact the scattering of images over surfaces such as “tabletops, studio floors, charts, [and] bulletin boards” was representative of “the most radical shift in the subject matter of art, the shift from nature to culture.” Culture is, in-deed, ever-present throughout ‘Aqua Regalia – Chapter II,’ owing to the artist’s almost anthropological collecting of images and ephemera from around the world. But there is no clear separation between the two, as Steinberg would have had it. Her installation connects and overlays references to both human and natural worlds, paying homage to the physical and energetic relationships between civilisation and its environments. 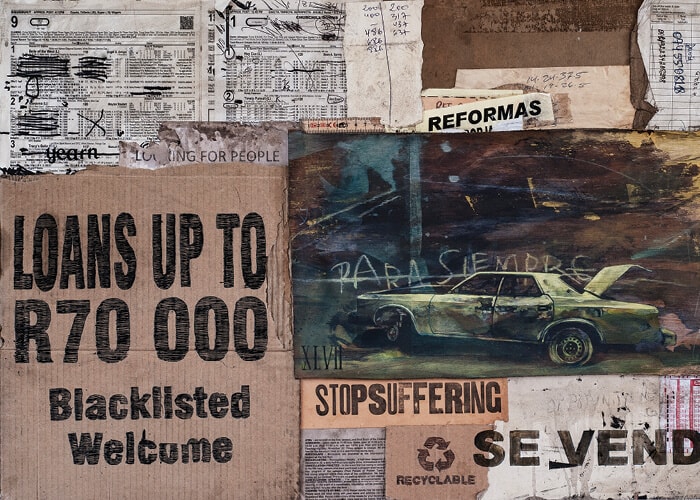 This is nowhere more evident than in The World’s Last Mysteries, a collage in which the focal point is the gilt-inscribed cover of abook entitled The Amazing World of Nature. Its deep blue cover is laid over an antique hemispheric map of the world, while small tamata – Greek votives in the shapes of body parts – are arranged in a tight horizontal row at its bottom edge. To the right of the book cover, the artist has hand-drawn a figural diagram that maps the movement of kundalini energy through the body; her pen snakes up and down the figure’s spine, its two helical lines crossing at his naval, heart, throat and third eye. These spiralling movements also inscribe and annotate the map below, as figure and ground – body and landscape – are literally merged. Behind the figure’s left shoulder, Faith47 presents a hand-written passage from Alan Paton’s 1948 novel, Cry, the Beloved Country, a seminal work of literature that interweaves the stories of a Zulu Reverend and a white landowner. Their paths converge at the nexus of tragedy and poignant revelation (despite the efforts ofthe then-nascent apartheid system to draw strict boundaries between them). The story unfolds, importantly, in the protagonists’ journeys between city and countryside. All across The World’s Last Mysteries, as in the entire exhibition, such borders between humanity and the earth, order and chaos, the holy and the mundane and other such binaries continually dissolve and merge.

‘Aqua Regalia – Chapter II’ ran from the 19th November through to the 20th December 2015 at the Jonathan LeVine Gallery in West Street, New York.