People still talk about the British conquering India, it wasn’t the British it was much worse, it was the world’s first multi-national corporation and these are important distinctions in the age of our friend Trump. The East India Company, imagine Walmart with nuclear submarines or Facebook with fighter jets, it was the worlds most militarised multi-national. By the peak of its power about 1800 it had a private security force that was twice the size of the British army.

In as little as 40 years this corporation, run as recently as the 1760’s from a single office in London with only 35 permanent staff, conquered the whole of the Mughal Empire and controlled about 40% of the worlds GDP.

The company however like all such companies, despite gaining such extraordinary wealth, was also surprisingly vulnerable. Like more recent mega-corporations the company that once proved extremely powerful was also vulnerable to economic uncertainty. Only seven years after this painting was painted and the dewani was granted, the companies share price had doubled overnight after it acquired the wealth of benghal. But the speculative East India Company bubble burst equally spectacularly. The company was left with debts of 1.5 million and a bill of 1 million in tax owed to the crown. When it became known to the public 30 banks collapsed like dominoes across Europe bringing trade to a standstill.

This picture hangs in the shadows of a dark oak panelled staircase, and it certainly isn’t a masterpiece, but it does repay close study. In the centre an efete looking Indian prince wearing gorgeous cloth of gold sits high on his throne under a silken canopy. On his left stands scimiter and spear wielding officers of his own army while to his right a group of powdered and periwig Georgian gentlemen are waiting to transact some business with him. The prince is eagerly thrusting a scroll into the hands of the statesmanlike slightly overweight Englishman in a red frock coat. It is August 1765 and the young Mughal emperor Shah Alam II, exiled from Delhi and recently defeated by the East India Company at the Battle of Buxar, has been forced to perform an act of involuntary privatisation. The scroll in his hands is an order issued in his name to dismiss all the existing Mughal revenue officials of Bengal, Bihar and Orissa and replace them with a set of English traders appointed by Robert Clive, the new governor of Bengal, and the directors of the East India Company. 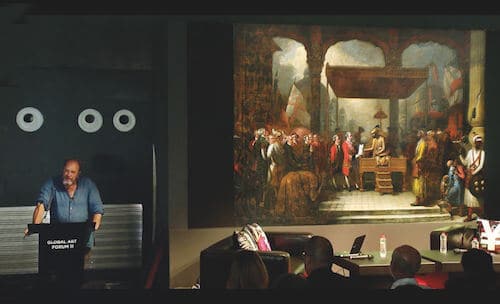 One of the very first Indian words to enter the English language was the Hindustani slang for plunder: “loot”. World-renowned historian and Jaipur Festival Director William Dalrymple delivered a dazzling lecture on the East India Company, “the original raiders,” and forerunners of today’s multinational corporations and global traders. This is a story of involuntary privatization, private armies and limitless profit that sounds less like the past, and more like the seed of our present and future. The text that follows is an excerpt from his presentation at the GLOBAL ART FORUM 11: TRADING PLACES.