The ART AFRICA December Issue: ‘Whose South Is It Anyway?’

in News Articles 2013
Share on facebook
Share on twitter
Share on email
Share on whatsapp
The ART AFRICA team has been hard at work on the upcoming December issue, ‘Whose South Is It Anyway?’ We have sent the second edition of the all-new ART AFRICA to print, and we eagerly anticipate its arrival on shelves and at numerous art fairs and events across the globe, including AKAA (Also Known As Africa) in Paris!
Here are some of the December issue’s highlights… 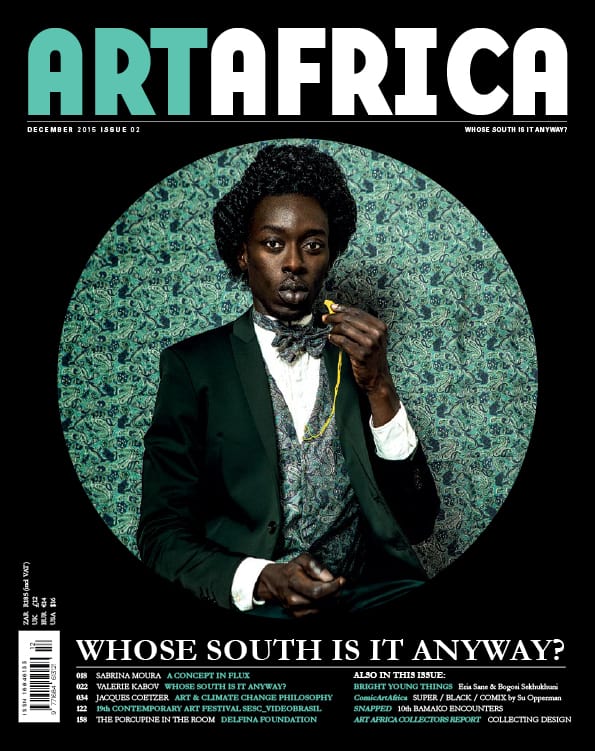 ART AFRICA December Issue, ‘Whose South Is It Anyway?’ featuring Omar Victor Diop, Frederick Douglass, 2015. Pigment ink jet printing on Hahnemühle paper by Harman. Image courtesy of Magnin-A Gallery, Paris.
As our focus on global discourse expands, we – as members of the so-called ‘geopolitical south’ – find ourselves at the centre of a much larger dialogue. With the ever-widening scope of debate and varying points of view, it becomes almost impossible to construct a cohesive argument that reflects and represents all of these disparate voices.
At best, we see ourselves as facilitators and our platform as one that poses pertinent questions to leading voices and thinkers who deliver their valuable insights. This issue seeks to find, question and report; presenting varying points of view in the hope that this creates healthy debates and sparks constructive conversations.
This December issue, titled ‘Whose South is it Anyway?’ grapples with and addresses some pertinent questions relating to concepts of the ‘Global South,’ such as: What is considered the ‘Global South’? Who does this definition encompass and what are its effects? And, increasingly, are these definitions and delineations even still relevant?
This particular edition takes its name from our positioning piece by Valerie Kabov, ‘Whose South is it anyway?’ (p.11). Kabov lends an indispensible voice to this issue, both as the founder and director of First Floor Gallery Harare and, we’re pleased to announce, one of our team as an ART AFRICA Editor-at-Large!
As Kabov posits, “terms like Global North and Global South are deceptive in their simplicity.” While the bulk of economic capital resides in the North, the Global South is home to more than eighty percent of the population and has become synonymous with the ‘emerging market’ – providing all manner of resources, services and commodities; one of which is contemporary art.
In her article, ‘Voices From the Global South’ (p.12), the African Arts Institute‘s (AFAI) research manager, Sophia Olivia Sanan touches on the investigation into dominant discourse, recognising the “ever increasing migrational flows… and environmental instability [that] are some of the defining characteristics of globalisation.”
There is evidence to suggest that artistic production from the Global South is further emerging in its own right – festivals like the Videobrasil (to which we were invited, p.100) are testament to the fact that the South can host these kinds of collaborations and have been for quite some time now (very successfully too). On our own shores, art fairs like Bamako Encounters (ART AFRICA was in Mali for the opening event, p.122), the FNB JoburgArtFair (extensive review by Ashraf Jamal on p.150) and LagosPhoto Festival have all shown substantial growth over the past decade. It is, in part, due to this growth that fairs such as 1:54 and Also Known As Africa (see our feature on p.200 and review of 1:54 on p.160) have sought to encompass the depth of emerging talent that Africa has to offer.
Although the ‘Global South’ can be a sticky concept to navigate, the positioning piece, ‘A Concept in Flux’ (p.228), by Brazilian curator and historian, Sabrina Moura employs new ways of thinking about it. As she points out, “concepts are often used as discursive tools to support artistic and curatorial projects that need to resort to the realm of theory.” Our question is: What are we doing about it? Hopefully, by keeping a “contextualised perspective, we might circumvent getting lost amid generalisations that respond only to the demands of whichever practice it helps to validate and edify.”
Other highlights include:
Look out for ‘Whose South Is It Anyway?’ – on shelves at a store near you soon! You’ll find us at Exclusive Books and CNA as well as in other niche bookstores and outlets across South Africa. Not in the country? No problem! Send us an email to enquire about international subscriptions on leigh[at]artafricamagazine[dot]org