in News Articles 2013
Share on facebook
Share on twitter
Share on email
Share on whatsapp
As we’re sure you know by now, First Thursday’s is an event that takes place at the beginning of every month, stretching between two of South Africa’s major capitals; Johannesburg and Cape Town. The event aims to bring a multitude of artists, galleries and audiences together, creating a platform for artistic and cultural discussion. Due to the scope of the event it is almost impossible to be able to see and do everything, so here’s a list of exhibitions that ART AFRICA is the most excited about! 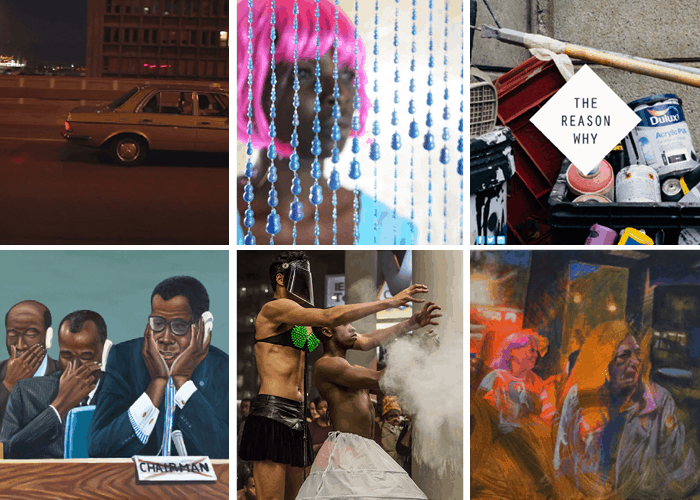 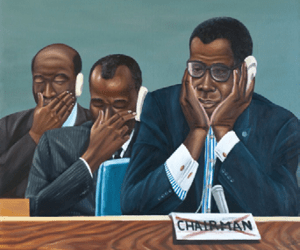 Zemba Luzamba, ‘It is What it is’
The title for this exhibition, ‘It is What it is’, brings to mind a certain degree of fatalistic sentimentality; once something exists, it exists. What can you do?
Zemba Luzamba was born and grew up in Lubumbashi, DRC during the 1970s. After finishing school he moved to Zambia to further his studies at the Evelyn Hone College of applied art and commerce. Due to rampant civil war back home, the artist decided to migrate to South Africa, where he has lived and produced art since 2000.
Luzamba’s paintings portray people. Who these people are, where they come from, and why they are there is unclear. Through composition, colour and an in-depth understanding of body language the personas appear to be continually engaging something that is never present but alluded to, leaving the viewer to question what ‘it’ actually is.
Location: 67 Loop Street 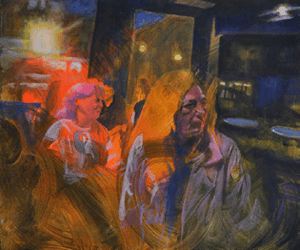 2. WorldArt:
Catherine Ocholla’s ‘Barfly’
Following up on the success of her previous exhibition at WorldArt, ‘The Trip’ (October 2014), Cape Town based artist Catherine Ocholla has spent a large proportion of her time capturing the characters and moments of happy hours across bars around Cape Town.
IN 2014 Ocholla’s paintings depicted a series of transitory moments drawn from night-time TV series stills. Divorced of any narrative, these images placed the viewer in a permanent position of being ‘in-between’, neither here nor there: “To the viewer, I may be documenting movement and interaction. But in reality there is no travel. Contrasts, incidental backgrounds and accidental arrangements take the viewer on a different journey” says Ocholla.
The title for her new body of work, ’Barfly’, is a reference to Barbet Schroeder’s 1987 biography on the life of poet Charles Bukowski. At face value these images function like portraits. What is striking about them is the artists ability to once more distance the viewer from the subject, allowing one to stop and stare, to be the fly on the wall.
“I tried to isolate random moments in public areas with the potential to take the viewer absolutely anywhere, the beauty being that each viewer will find a different story when looking at the same painting,” says Ocholla.
Location: 54 Church Street 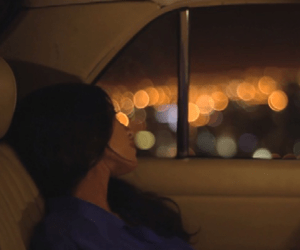 3. Gallery MOMO:
Demo Tape
Gallery MOMO will be opening their doors this evening with a diverse range of film and performance. As these mediums continue to grow, ’Demo Tape’ provides an indication of the poetic efficacy of film as a nuanced and powerful tool for expression.
The films will be screened throughout the galleries various rooms with works by Kurt Orderson, Christine Cronje, Amirah Tajdin, Roger Ballen and Maurice Mbikayi, as well as Francois Knoetze’s performance of Cape Mongo.
Dealing with issues of waste, materialism, obsession, gentrification, cultural prejudice, and exploitation, this collection of work is sure to generate a large amount of interest over the course of the exhibition.
Location: 170 Buitengracht Street, Oro Africa Building

4. Youngblood Gallery:
‘The Reason Why’
This month YoungBlood Gallery present a new body of work produced by the CRATEcollective; a group of accomplished street artists comprising Mr Migo, Marti Lund and Skubalisto.
Street art’s accessibility to the everyman, its anonymity and its ability to transform the public environment has become a powerful tool for communication, raising questions about freedom of expression, communal responsibility and the right to inhabit. Using the galleries three stories as a site of investigation, ’The Reason Why’ seeks to explore the multiple narratives that surround urban spaces and marks the first collective appearance of their work within the Cape Town gallery environment.
Here’s a link to their previous collaborative project at the Ism-Skism Residency in Clarens 2014, as well as a teaser of the work that will be on show tonight:
Location: 70-72 Bree Street 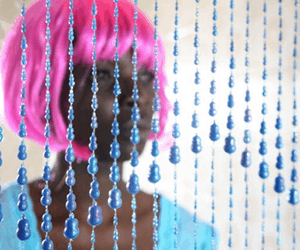 5. Michaelis Gallaries:
‘Fantastic’
Curated by Nomusa Makhubu and Nkule Mabaso, ‘Fantastic’ is going into its final week. The exhibition draws inspiration from writers such as Ben Okri, bringing together video art and photographs that highlight the complex relationships these technologies have in the constructions and fantasies about ‘Africa’.
The exercise of power is related to the control of visibility/invisibility, deception and silence. ‘Fanastic’ helps us negotiate the imagination as a site for social practice, an idea emphasised by Okri in ‘Tales of Freedom’:
“The magician and politician have much in common: they both have to draw our attention away from what they are really doing.”
Artists include:
Jelili Atiku (NIG)
Dineo Bopape (SA)
Kudzanai Chiurai (ZIM)
Andrew Esiebo (NIG)
Milumbe Haimbe (ZAM)
Aida Muluneh (ETH)
Terence Nance (USA)
Tracey Rose (SA)
Zina Saro-Wiwa (UK/NIG)
Pamela Phatsimo Sunstrum (BWA)
The exhibition will run until 09/10/15.
Location: Michaelis School of Fine Art, UCT Hiddingh Campus, 31-37 Orange St
JOHANNESBURG: 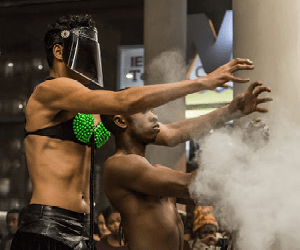 1. Wits Art Museum:
‘Werk It!’
Brought to you by the Wits Art Museum, ‘Werk It!’ is a performance piece by Johannesburg based artist Kieron Jina. Following his performance at the FNB JoburgArtFair 2015 (titled ‘Exotic’ – in collaboration with the Kalashnikov Gallery),  ‘Werk It’ investigates the diversity of masculinity in Africa by sourcing material from the sex industry, African traditions and popular culture.
This performance aims to create a platform for further discussion and research toward the increased and narrow-minded prejudice that surround homophobic attitudes and policy making across the continent.
From 8pm.
Read more here. 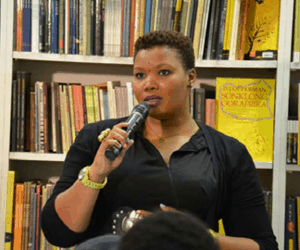 2. Fourthwall:
Vangi Gantsha, ‘Undressing in front of the window’
Fourthwall Books presents a new series of work by spoken poet Vangi Gantsho titled ‘Undressing in front of the window’.
Vangi Gantsho is a poet, cultural activist and founder of the NO CAMP CHAIRS Poetry Picnics, held at the Union Buildings on the second Sunday of every month. She has participated in poetry events and festivals around the world, including Poetry Africa, the Word ‘n Sound Spoken Freedom Festival and the DMV Louder Than a Bomb Youth Poetry Festival.
Here’s a link to Vangi Gantsho’s performance at POETRY AFRICA 2014.
Location: Fourthwall Books, 5 Norvic House, Reserve Street, Braamfontein
Time: 6 for 6.30 pm