Since ART AFRICA’s inception in September last year, our primary focus has been to shape a more comprehensive and well-rounded understanding of artistic practice from Africa and its diaspora, presented by a broader base of global contributors. Concluding our first year of publishing as ART AFRICA, we shift our focus to the U.S., following on from our Sub-Saharan Africa, European, Global South, and MENA region (Middle East and North Africa) focus. 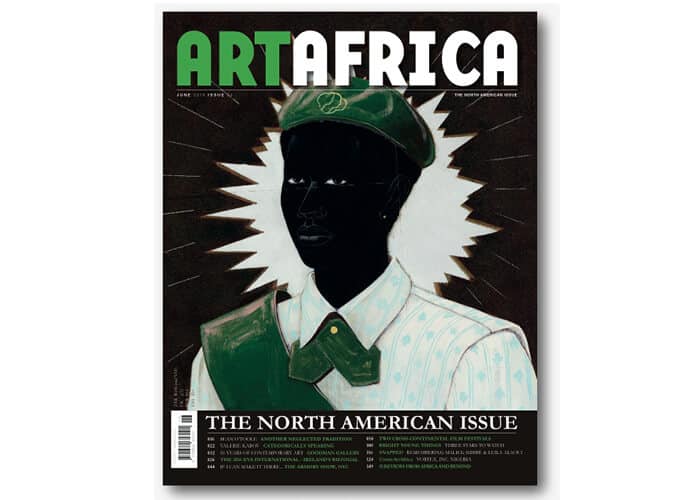 From our very first issue, themed ‘Becoming African,’ questions around definition and labelling have remained at the center of our conversations. In this day and age, what is ‘Africanness’? What effect do these sweeping terms – African, Arab, Global South, and, in this particular issue, African-American – have on the individual agency of artists? How do we, in all of our multiplicity, ground ourselves without being subjected to a ‘global’ art canon that tends to lump us all together under the reductive banner of ‘contemporary African art’? 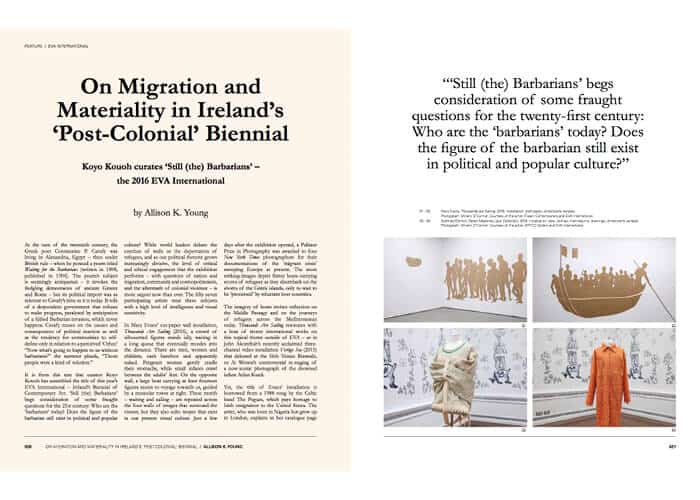 In this issue we focus on two prominent events on the global annual circuit: EVA International: Ireland’s Biennial of Contemporary Art, curated by Koyo Kouoh, under the title ‘Still (the) Barbarians’ (pp. 026), which critically interrogates questions of nation and migration, community and cosmopolitanism, and the aftermath of colonial violence – highlighting that the need to address these global issues is more urgent now than ever. Secondly, The Armory Show, which hosted a focus exhibition titled ‘African Perspectives’ that received extensive media hype, as evidenced in Valerie Kabov’s review of The Armory Show (‘If I Can Make It There…,’ pp. 044). Here the problematics of unifying all “black art” under one umbrella is evidenced, a “categorical generalisation” that curator Dexter Wimberly (interviewed on pp. 128 of this issue) points out as being problematic. 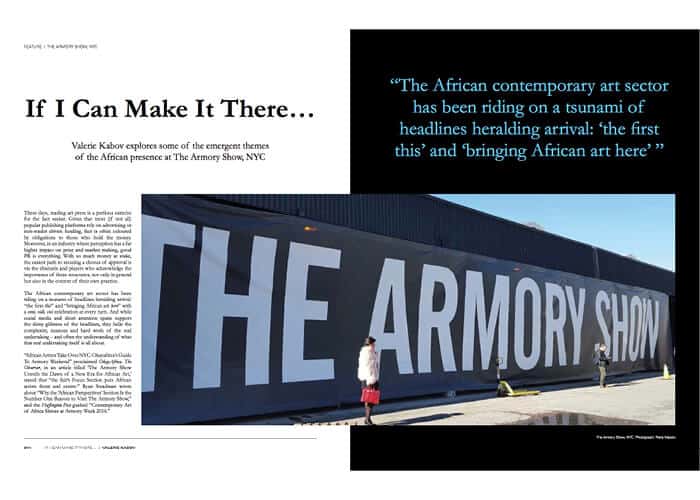 ‘If I Can Make It There…’ By Valerie Kabov; ART AFRICA Vol.1 Iss.4. © ART AFRICA Magazine

“I have mixed feelings about art fairs’ current focus on Africa and its diaspora,” said artist ruby onyinyechi amanze in an interview (pp. 094). “I think the visibility it is affording artists like myself is, generally speaking, a positive thing. If that exposure leads to something else – something more globally inclusive and sustainable – then great. But on the other hand, it often feels like its just a passing trend, and artistic trends tend to lack curatorial focus. No one is asking any questions or making any meaningful connections. They’re just lumping us all together.”

So, ‘Categorically Speaking’ (on pp. 022), the Western hype suggests to the new generation of African artists that leaving the continent is the best way to be seen and in so doing, advance their career, effectively damning artists who choose to remain on the continent, where resources and infrastructure are lacking. Successfully addressing this head-on are the emerging African film festivals, shnit International Shortfilmfestival and the New African Film Festival (USA), who aim to promote artists working within Africa by developing the local industry and taking their films to broader international audiences, to familiarise them with “a continent they hardly know” (‘Zooming in on Africa,’ pp. 058). 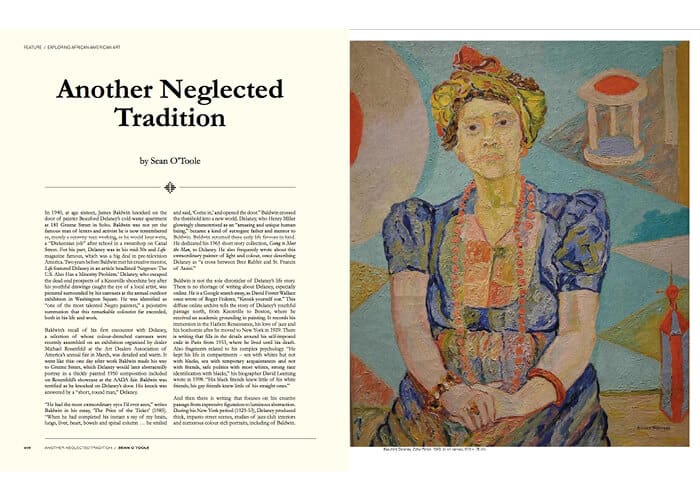 In ‘Another Neglected Tradition,’ (pp. 016) Sean O’Toole considers the fact that American institutions are only now starting to address the lack of African-American artists in institutional and museum collections. It is evident that there is still a really long way to go. In this feature he quotes Glenn Ligon in saying that “the institutions that first showed [African-American art] thought that one show was enough. They didn’t invest in their [African American artists] production in the long run, whereas they did invest in the careers of white male artists… When, for example, have you seen two artists of colour have major shows at an institution at the same time?”

The demand for interrogative curatorial considerations that address this is clearly prevalent, as can be seen through the recent shows ‘Embracing Diverse Voices: 90 Years of African-American Art’ (pp. 144) and ‘Senses of Time: Video and Film-Based Works of Africa’ (pp. 138), both of which have actively highlighted the need for public art collections in the USA to become more inclusive.

From South Africa, critic and arts journalist Ashraf Jamal looks at the resurgence of interest in manual photography (Bright Young Things ‘Sarah Schumann and Aidan Tobias: Jurassic / Predigital,’ pp. 104) and the continuing ripple effects of #RhodesMustFall (‘Us and Them, The Killer of the World,’ pp. 068), as does ‘New Monuments’ by Sinazo Chiya (pp. 168). Minnette Vári’s mid-career survey exhibition at the Standard Bank Gallery (Johannesburg) reflects not only an explicit engagement with South Africa’s apartheid history, but a new interrogation into the politics of a globalised image economy.

This year the Goodman Gallery celebrates its 50th anniversary. As part of the feature, we spoke to owner and director Liza Essers (‘50 Years of Contemporary Art from Africa,’ pp. 032), who exposes the rich history of this important institution and the invaluable impact it has had in highlighting South African and African contemporary art practice to the international art world.

It is in this spirit that we look toward the next volume of ART AFRICA and to the new and exciting ways we will facilitate and present engaging conversations from the continent and beyond.