‘Art, Conflict and Ways Of Knowing:’ An interview with Oussama Rifahi by Sophia Olivia Sanan

As the Director of the Arab Fund for Arts and Culture, Oussama Rifahi has played an integral role in the development of the arts and culture sector worldwide, including the development of Abu Dhabi’s ever expanding business model for tourism and culture. During this interview he speaks to arts academic and enthusiast Sophia Olivia Sanan about the successes and challenges faced by the Arab Fund for Arts and Culture, and the role that art plays in re-aligning ‘outsiders’ perceptions of life in the Middle East, following the migration crisis and the ongoing conflict in places like Syria. 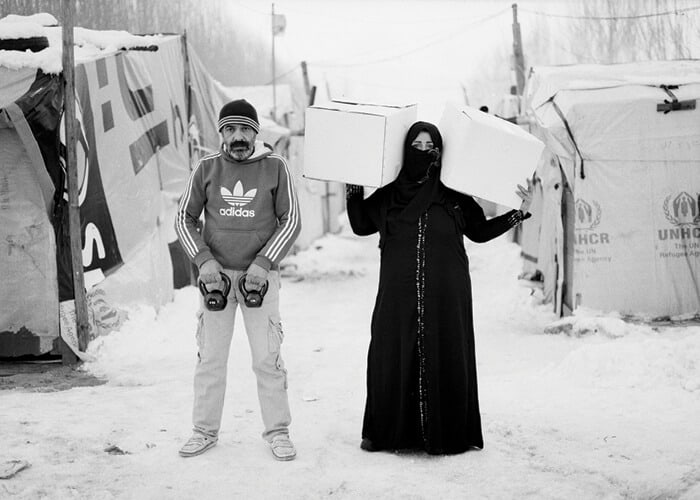 Omar Imam, Live love Refugee, 2014. All images courtesy of the Arab Fund for Arts and Culture.

I met Oussama Rifahi during a conference on arts education in Cape Town in December 2015. Rifahi is the Director of the Arab Fund for Arts and Culture. Previously, his work in museum development and consultancy has taken him to New York, Europe, the Middle East and Central Asia. He was deeply involved in the development of the business model for tourism and culture in Abu Dhabi, he supported developments on the cultural district of Saadiyat Island and was part of the initial negotiations between Abu Dhabi and the Louvre and Guggenheim museums. In Cape Town, I watched him animate an entire hall full of influential European arts education leaders with a call to open their institutions in response to the migration crisis of Northern Africa and the Arab world. It immediately occurred to me that art production and arts education could present powerful mechanisms through which to understand and challenge the complexities of the current global crisis in the Arab world.

Having just returned from the island of Malta (a curious place to be in the midst of the great 2015 migration crisis), I had flown to Cape Town via Dubai and over Cyprus, Syria, Iraq and Kuwait. From the air, these infamous zones of conflict were no more than vast beige quadrants of criss-crossed roads and ragged mounds of earth. International mass media has ensured that the Arab world is marked as the eye of a global military storm and yet, for all the press coverage, the area that I gazed at through the window remained shrouded in mystery. Real lives are the stuff of which sensational headlines are made. Millions of incremental human crises get played out hour by painful hour, and not as events that are marked as such by a newsstation. In light of the lack of knowledge that the insatiable machine of global visual culture can produce, I reflected on the potential of art as a way of knowing the world.

Knowing that Rifahi is based in Beirut, and feeling fired up about the impending UK Commons vote to decide on further bombing in Syria, I felt compelled to ask him to satisfy (some of) my curiosity about life in the Arab world in the midst of a global crisis. Our conversations during the conference ran undocumented. They were enough however to persuade me that a brief chat with Rifahi about the Arab Fund for the Arts, and the work that some of their affiliated artists are doing, could shed some light on art and creative production in times of enormous upheaval. 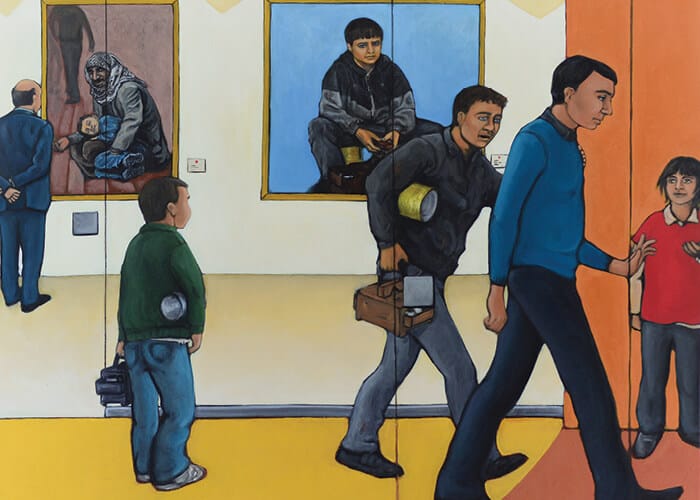 Sophia Olivia Sanan: What does the Arab Fund for Arts and Culture do and where does it operate?

Oussama Rifahi: The Arab Fund for Arts and Culture is an independent grant-making foundation that supports Arab artists and institutions, both financially and professionally, in all contemporary genres such as literature, visual arts, performing arts, cinema, photography and music.

What is the AFAC’s long-term vision and what have been the successes and challenges in moving towards this?

AFAC envisions a thriving Arab art and cultural scene, one that is confident in its expression, open to dialogue, accessible to all and sustained locally by committed patrons, with an emphasis on two fundamental principles: transparency in the grant- giving process and independence through a diversity of funding sources. We have managed to propel many young, talented artists to achieve their goals in unveiling important narratives to a wide regional and global audience, and we have been making headway in enlarging the circle of donors.

The two challenges we have struggled with are the difficulty to make the case for arts and culture in fundraising in the context of an acute humanitarian and political environment, as well as reaching out to artists in remote, difficult and dangerous locations.

To what extent are you able to gauge the AFAC’s cultural impact?

We have developed various methodologies, both quantitative and qualitative, to assess the footprint and impact of the work of our grantees. Artistic impact is often of an intangible nature, but through storytelling, data gathering and analytical infographics we are managing to assess the social impact, or return on investment of the projects we support. Our Mapping AFAC section and Grantee Stories and Voices sections (on our website) are a reference to this. 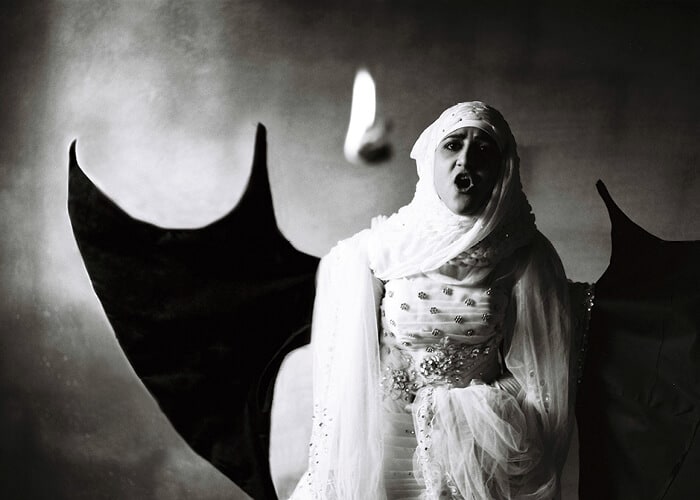 To what extent does it make sense to talk about the ‘Middle East’ and what does this mean in cultural terms?

Our area of intervention is the ‘Arab Region’that covers the twenty-two countries of the Arab world. This combines North Africa and the Middle East, often denominated as MENA. The Middle East is often considered to include Turkey and Iran, which are not part of our mandate, although our artists and artistic institutions are often in close interface and interaction with them.

Could you share some examples of work from artists related to AFAC and indicate some of the themes that they are dealing with?

Omar Imam (Syria) is working on a series of photographs titled ‘Live, Love, Refugee.’ Through documentary and fictional photographs based on the lives of Syrian refugees living in Lebanon, Imam documents the worlds of couples from Syria. He questions how the war, revolution and displacement have affected intimate relationships between men and women.

Egyptian Eman Helal is working on a photo essay documenting how the phenomenon of sexual harassment in Egypt has grown out of control. Titled ‘Just Stop’, the essay will depict how this issue affects a large segment of the Egyptian population.

Dona Timani, from Lebanon, is working on ‘Paint a Vulgar Picture; On bordering and othering in the Arab world,’ an exhibition of paintings that dissects Arab communities and the underlying ideologies of power. The series of controversial portraits elucidates the politics of exclusion and alienation, identity crises and a myriad of conflicting ideologies across the geographical space labeled the ‘Arab world.’

Lastly, the Moroccan Hassan Darsi is working on ‘The Square from Below,’ inspired by the geographic location of the artist’s studio which overlooks an abandoned space in the heart of Casablanca, the former Légal et Frère factory. It could be the kind of view found in many different cities; locations damaged by time and left behind by the ongoing striving for modernity: Algiers, Tunis, Beirut, Cairo. While this perspective is a denouncement of society’s failures, it also arouses dreams of what new function can be imagined for this specific space. 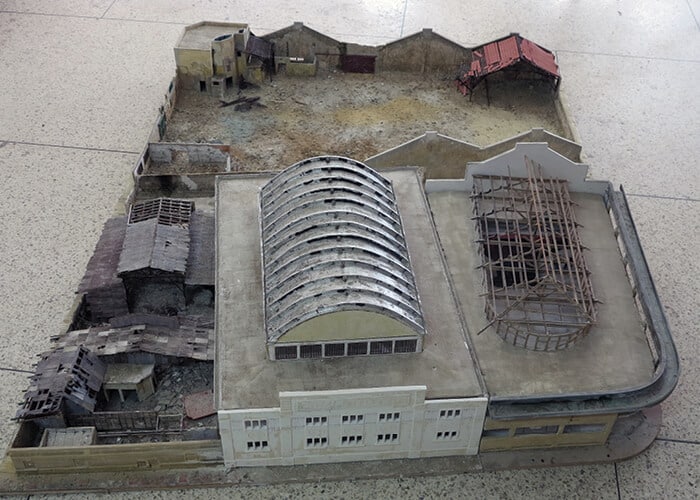 Hassan Darsi, the square from below, 2009-14. Dimensions Variable.

Given the ongoing conflict in places like Syria, the ensuing human migratory crises being set off in its neighbouring countries and the hugely distorting effect of international media in telling the story of what is happening in this region, do you think that art forms and cultural products have a role to play in re-aligning ‘outsiders’ perceptions of life in the ‘Middle East’ or is visual culture also distorted by politics?

The ongoing political crisis in many of the Arab countries today has indeed shaped the international news in a biased way. There is no denial that the events unfolding are dramatic, however, they distort the perception of the region and in a certain way de-humanise its people into numbers, statistics and a limited number of stereotypes. To counter this tendency, artists have managed to produce a number of alternative narratives that shed light on realities as they are lived or survived.

Can art help us better understand life and make the right decisions in this complex, visually over-stimulated global culture? If so, how? What kind of art and how does it get around?

This is why we over-emphasise an alternative type of artistic narrative, one that is more reflective, slow-burning if you like. For example, not one image that gets shared a million times on Facebook, but rather a documentary sequence of pictures or a trailer that gives a better insight to the underlying realities. Outside of the ‘Hollywood’ type of narrative is one that is more embedded into the realities of the people of the region and can be seen and understood through its rich literature, film, music and contemporary dance.

Sophia Olivia Sanan holds a Masters degree in Sociology, has an academic background in both Philosophy and Visual Art, and has worked as a lecturer and writer in the fields of Visual Culture and Art Education. She is currently working as the Research Manager at the African Arts Institute, a civil society organisation in Cape Town.