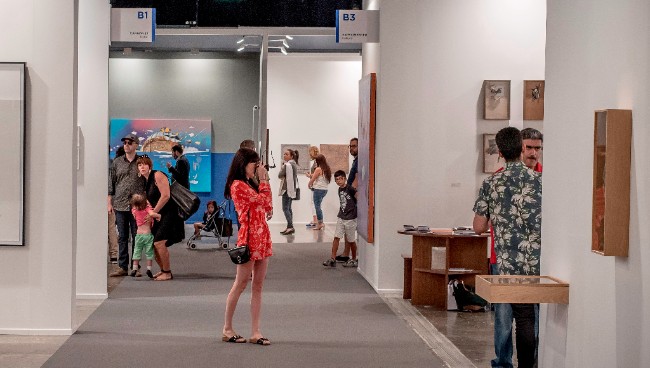 Art Dubai announced today the gallery line-up for its 2018 edition, as well as the launch of a new section entitled Residents, which will debut at the fair next year.

Held under the patronage of HH Sheikh Mohammed bin Rashid Al Maktoum, Vice President and Prime Minister of the UAE and Ruler of Dubai, and in partnership with The Abraaj Group, Art Dubai 2018 will feature a record 103 galleries from 47 countries, making the coming edition the fair’s largest and most globally diverse to date. Alongside 78 returning galleries, the fair will welcome 25 first-time exhibitors from around the world.

Confirming its unique identity as a place of discovery and a meeting point for art from established centers of the international art world and emerging scenes alike, Art Dubai’s Contemporary section will feature 78 galleries from 42 countries in 2018, including first-time participations from Iceland, Ethiopia and Kazakhstan.

The fair’s 2018 edition will also see the launch of Residents, a one-of-a-kind 4-8 week residency programme for international artists, invited to the UAE to immerse themselves in the local art scene, to create a body of work which merges their distinct artistic practice with their surroundings. The final works will be on show in the new section of the fair, presented by the artists’ respective galleries.

Pablo del Val, Art Dubai’s Artistic Director commented: “With every edition, Art Dubai asserts itself as the world’s most international art fair and the diversity coming through participating galleries from 47 countries is testament to this. For our 2018 edition, we will be launching Residents, a pioneering and unique platform that brings together different energies, synergies, geographies and artistic practices, which one doesn’t usually see together in one place.”

Celebrating its fifth edition in 2018, Art Dubai’s Modern section remains the only commercial platform in the world to showcase museum-quality works by artists from the Middle East, Africa and South Asia.

Art Dubai’s Director Myrna Ayad commented: “It is very exciting for us to witness the growing appreciation of Modern Masters from the region, and we are pleased to be the only platform in the world to showcase these museum-quality pieces in our largest-ever Modern section, which has been the most oversubscribed edition to date. Serving as an educational platform and theoretical framework for the works on show, Art Dubai Modern will be accompanied by our second annual Modern Symposium at the fair this year.”

Art Dubai is sponsored by Julius Baer, Meraas and Piaget. The fair’s 12th edition will take place March 21-24, 2018 at its home Madinat Jumeirah.

Spread across two gallery halls, Art Dubai Contemporary 2018 will feature 31 galleries in its Solo section – a section focused on solo- and two-artist presentations – and 47 galleries in Collective, which is dedicated to multi-artist shows, with both sections mixed across the two Contemporary halls.

The strong representation of galleries from the Middle East, North Africa and South Asia, is testament to Art Dubai’s role as a driving force in the development of the art scene of the wider region and its market. The diverse line-up from across the Middle East and North Africa includes Sfeir-Semler Gallery (Beirut, Hamburg), Athr Gallery (Jeddah), Galerist (Istanbul), Selma Feriani Gallery (Tunis, London), Gypsum Gallery (Cairo), Voice Gallery (Marrakech), Agial Gallery (Beirut) and Galerie Tanit (Beirut, Munich), who will exhibit alongside Experimenter (Kolkata) and Canvas Gallery (Karachi) from South Asia.

African art will feature prominently at the 12th edition in both the gallery halls and the Residents section, Art Dubai will welcome Gallery 1957 (Accra), Addis Fine Art (Addis Ababa, London), Tafeta, (London), and Officine dell’Immagine (Milan), amongst others.

An indicator of its ongoing success, Art Dubai Modern 2018 will feature a record number of 16 galleries exhibiting artists from 14 countries. For the first time, Art Dubai Modern will offer the opportunity to see galleries present tightly curated collective exhibitions, in addition to solo and two-artist shows.

Residents 2018 will present an intimate selection of 9 solo gallery presentations by artists from around the world working across all media. The galleries in this section will be presented in a special exhibition between the two Contemporary gallery halls.

The programme aims to support artists by providing a platform to develop their practice and create new work inspired and influenced by their stay in the UAE. Framed within a unique geographical and cultural context, Residents further aims to facilitate exchange and dialogue between artists, local communities and the broader cultural landscape.

During the residency, artists will have the opportunity to engage with the local community, work collaboratively with one another, participate in talks and conduct open studios. Further details around this will be announced soon.

Read more about the Abraaj Group Prize Winner and shortlisted artist who will be participating in an exhibition at Art Dubai 2018 here.