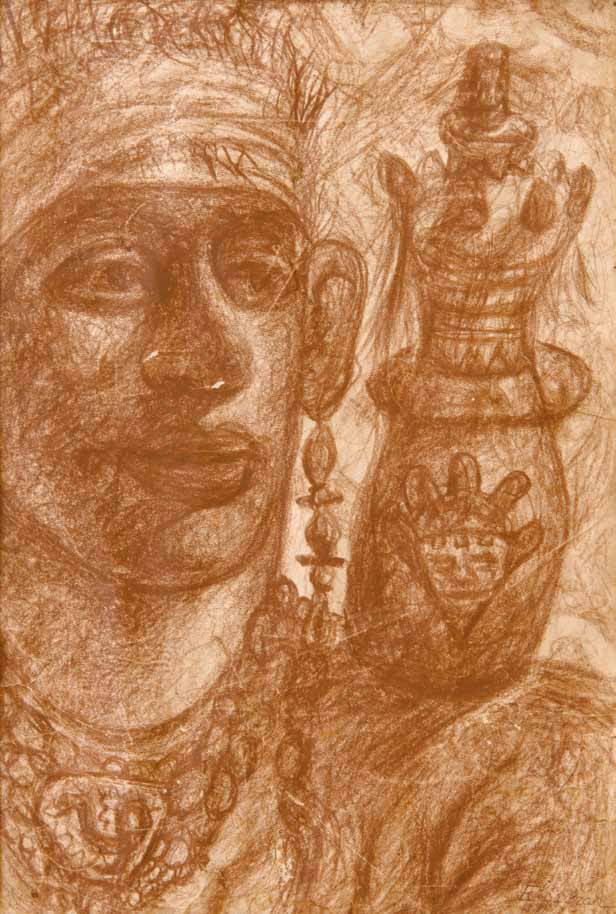 ART AFRICA spoke to Karim Francis, gallerist behind Karim Francis Gallery in Cairo, Egypt, about the work he will be exhibiting at Art Dubai 2018, as a part of the Dubai Modern section. Established in 1995, the gallery continually discovers, encourages, supports and promotes the achievements of Egypt’s artists, past and present.

This year the gallery will be showcasing the work of the renowned Egyptian masters, among them Samir Rafi, Abdel Hadi El-Gazzar, and Hamed Nada, that formed the Contemporary Art Group. In this interview, Francis describes how the group rose to prominence in Cairo in the 1940s under the mentorship of Hussein Youssef Amin and came to represent an articulation of “Egyptian authenticity”, rich with symbolism. 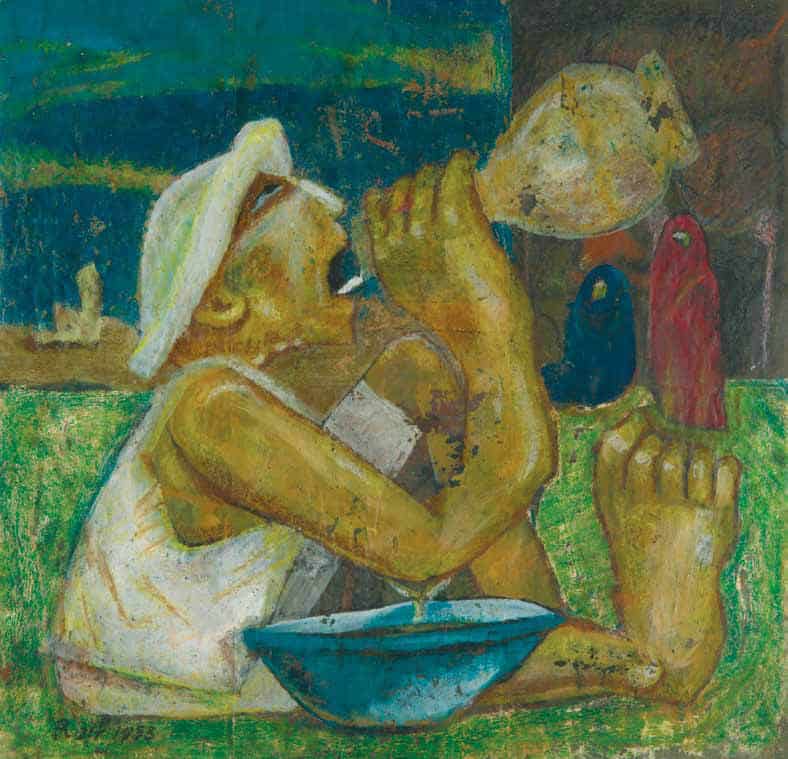 ART AFRICA: You are set to exhibit the Contemporary Art Group from Cairo for the Dubai Modern exhibition at Art Dubai – how did these artists influence the contemporary art scene in Egypt at the time, and why do they remain relevant today?

Amin created a group spirit by urging members to find subjects corresponding to their individual temperaments and philosophies, and the most appropriate plastic treatment to reveal it.

All tried to establish a close relationship between the environment, its philosophy, and the spirit of a technique and its adequacy in serving the subject. However dissimilar each personality seems to be, the group’s collective aesthetic reflected a synthesis of feelings that expressed the Egyptian authenticity of their artistic enterprise.

These artists influenced the art scene at this time, through the power carried by their paintings and opened the eyes of others on the necessity to look at painting through a different angle.

As these artists were trained by Hussein Youssef Amin, at their turn, they developed their ideas with their students, since most of the artists of the Contemporary Art Group were teaching in art schools in Egypt.

They allowed their students to prioritise the psychological, social, historical, and geographical conditions of Egypt, rather than insisting they conform to prevailing European techniques and tastes. Also, by freeing them from the cosmopolitan in order to discover the universal.

All these universal questions about space, time, personality, and innovation are still valid today and will certainly continue to exist in the future.

You have chosen not to exhibit the work of Hussein Youssef Amin at Art Dubai 2018, despite his integral role in establishing the Contemporary Art Group. Can you tell us more about the curatorial vision and thought-process behind this decision?

A second-generation painter of the modern Egyptian art movement, Hussein Youssef Amin was an educator who adopted a new method of art studies, based on his students’ individual development and freedom of expression. His circle of students at Cairo’s Faculty of Fine Arts in 1944 became the founding members of the Contemporary Art Group and rose to prominence n Egyptian modern art. The group included artists Abdel-Hadi El-Gazzar, Hamed Nada, Maher Raif, Samir Rafi, Kamal Youssef, Mogli (Salem El-Habshi), and Ibrahim Massouda. In 1946, Amin organised their first group exhibition, at Cairo’s Lycée Française.

Hussein Youssef Amin was from an earlier generation than his students and had a role of educator/mentor. We thought that it was more important to introduce the person behind the group in our catalogue, than showing his artworks, with more focus on the artists that were part of the group. The main idea for us is to introduce an important Egyptian art school rather than individual artists. Also, we are limited by the size of our booth. 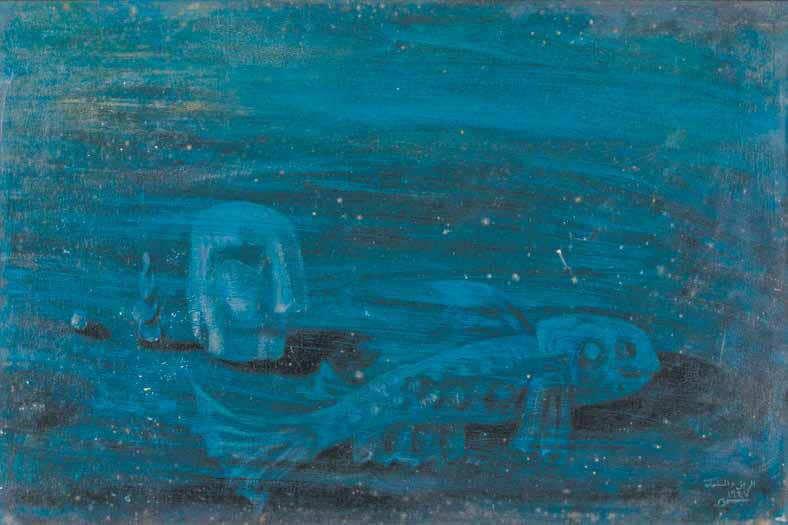 Symbolism played an important role in the work of Samir Rafi, Abdel Hadi El-Gazzar, and Hamed Nada. Could you please tell us a bit more about these symbols, and their lasting significance?

Symbolism plays a role in the work of many of these young painters. An ornamental intellectuality reminiscent of arabesques dominates Samir Rafi’s work; certain calligraphy, which seems influenced by classical Arabic, runs through a number of paintings by El-Gazzar and an almost Pharaonic immobility often marks the forms of Hamed Nada.

The Egyptian world is constantly evoked by the use of symbols that Nada and El-Gazzar took directly from spiritually-charged superstitions and traditions: the number five that represents Fatma’s hand, and the Pharaonic ‘Eye of Horus’, both protective talismans; the tortoise, signifying patience and peace, introduced to popular literature by Zeno’s translation in Arabic, and later to oral tradition. The snake has totemic origins; god of caves and underground passages, of the Earth’s mysterious depths, in popular tradition it was the guardian of men and, in the form of ankle bracelet, the protector of women.

The Pharaonic bull, like the Aegean bull and the bull of Baal, symbolised fecundity, fertility, and sex. The turtledove, Aphrodite’s love bird, was a symbol of peace and love, known to have shielded the Prophet, beloved of God, when he fled from his enemies and closed the mouth of the cave where he hid with dove nests. The double blade sword that the caliphs established as a sacred symbol represents the spirit of conquest in heroic times. Finally if the mouse means fear, the furtive rate represents the secrets he is guarding and perhaps man’s fear of subconscious monsters. 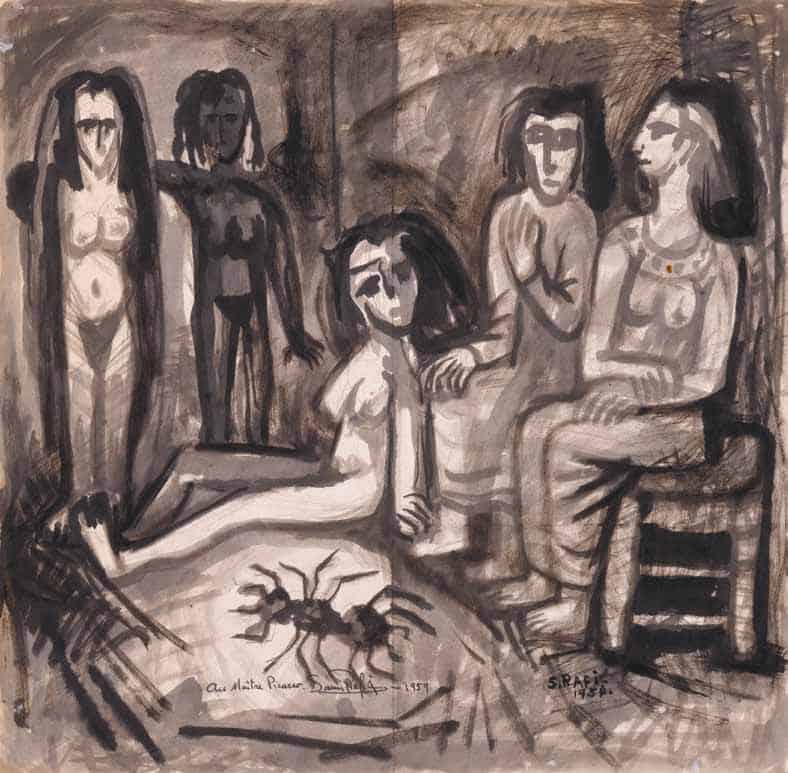