Selma Feriani Gallery will be presenting the most recent body of work by Tunisian artist, Lina Ben Rejeb and Tunisian artist of Turkish origin, Hedi Turki. ART AFRICA spoke to Lina Ben Rejeb about her work set to exhibit at the 12th edition of Art Dubai alongside one of her influencers and well-known abstract pioneer. Rejeb discusses the exhaustion of colour in her pieces and its relationship to her recurrent theme of finitude. Art Dubai will be taking place at Madinat Jumeriah, Dubai, March 21-23 2018.

ART AFRICA: Exhibiting alongside one of your greatest influencers, Hedi Turki, a pioneer of abstract painting himself, must be an exciting prospect! What was it about his work, or him personally, that first captivated your attention?

Lina Ben Rejeb: Hedi Turki’s painting was my first encounter with abstraction. Later I came across the idea of reductive painting, to work with the strictly necessary, the bare essentials as seen in the work of minimalist artist, Paul Cézanne. I wanted to move away from the image to better understand it, to make space for white as a revealing colour. My interest in Hedi Turki is also related to the idea of light in painting, as well as the filters or quasi-screens of colour that take shape when superimposed. Moreover, the image of weaving present in his ‘drip’ works, reminds us of the craft-work practiced in painting, to mimic a weaving loom.

Both your and Hedi’s work set to be exhibited at Art  Dubai 2018 is strongly focused around exhausting a landscape to reveal its most basic elements. Could you talk us through the meaning or dialogue you are trying to communicate through this unique and specific style?

The exhaustion of a landscape was precisely the starting point of this dialogue. I chose to exhaust a landscape by suggesting a shift in Copie à Revoir, exhausting a view, a cloud, a moment of the day: the blue hour. I chose to exhaust a shape and a gesture. The colour present in the ‘drip’ in Hedi Turki’s work is what inspired my idea of exhausting the ink catridge to create the images in Copie à Revoir. But also the felt pen, in Tel Quel, I exhaust lines of colour by repeating them. It is a question of sliding from one colour to another and to make this shift as sweet and imperceptible as possible, just as the colour and the light would appear in a landscape during the blue hour. What really captivates me in Hedi Turki’s work and what I believe is common to us both is the question of finitude: the finitude of a gesture or a tool, to suggest the limit, the end. 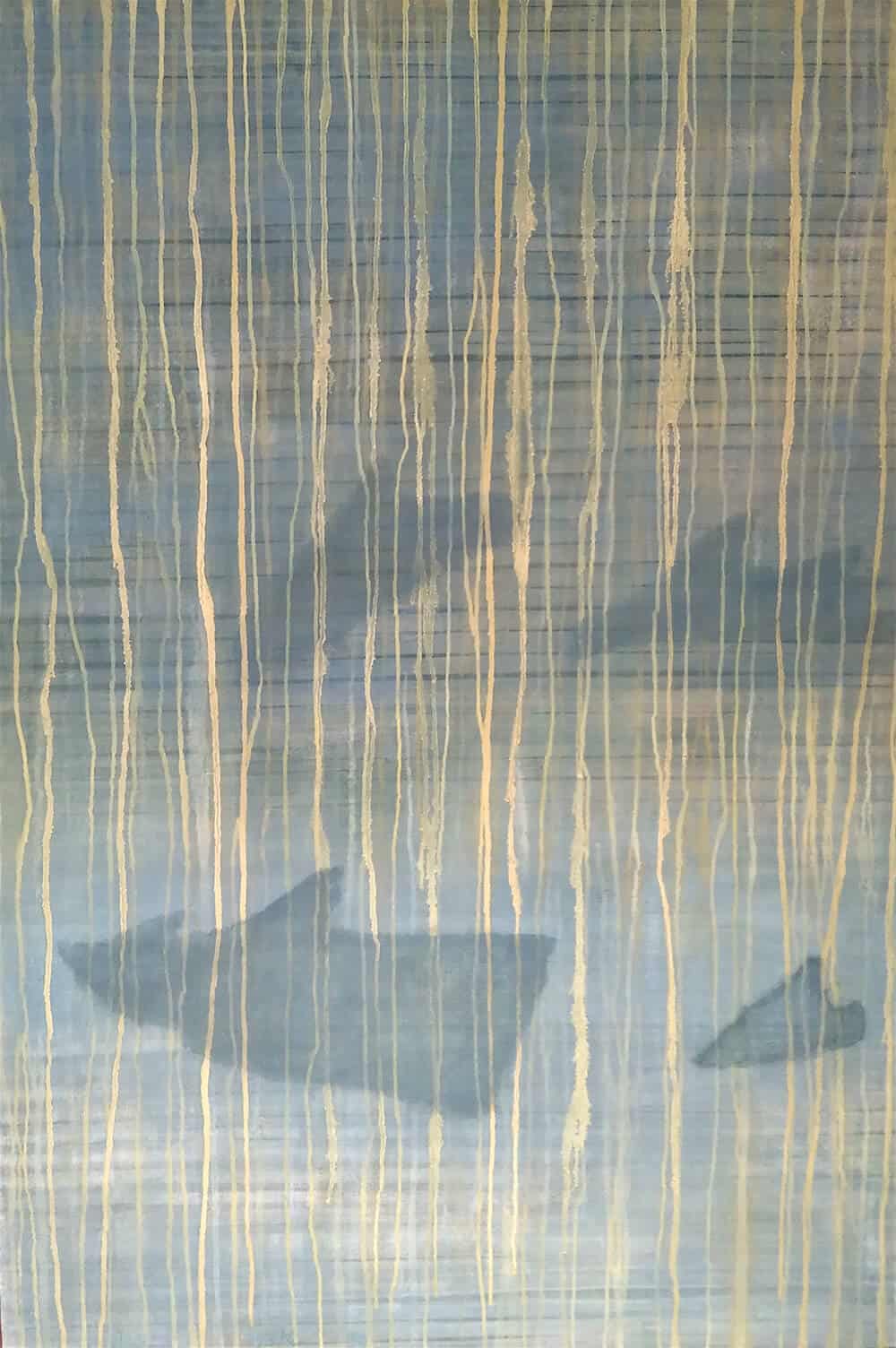 Photocopying and painting are said to be your primary techniques. In Copie a Revoir, however, your projection-installation, a series of slides coupled with silk screen-printing of water colour landscapes were used. Do you see yourself using photography more in your work? What were you communicating, or what was behind this specific set of images?

The starting point of Copie à Revoir, is a set of photographs that have been exhausted through print: I photocopy and reprint images of landscapes hundreds of times in order to change their appearance. Rather than suggesting a disappearance, I come up with a new image. This process allows me to talk about machines and their exhaustion, one ink is replaced by another and thus makes the image unrecognisable. I also like the idea of excess, which is often associated with images today. I try to get around this and install breath. Instead of going toward an excess, the repetition in the notebooks in Tel Quel and the projections in Copie à Revoir, allow me to set a rhythm, a unit that will accompany this displacement of the image.

To come back to photography, for me it is a way of sketching instead of drawing. I take pictures of elements which serve as a working basis or stimulus for gestures. The medium imposes itself according to the project. So it is not to deny the potential of this material, which for the moment I use to document, of appearing in a future piece that would speak toward the disappearance of works and old images.

I do not really communicate; I try to grab another’s attention by chance. I like the idea of physically manipulating an image, to deplete a resource so in a sense an image is set to lose it’s material. I am interested in the confusion that inhabits a moment like the blue hour, that is conveyed in Copie à Revoir and in We are such stuff as dreams are made on. A cyanometer tries to find the right colour in the sky all the while suggesting a temporality stitched into colour itself, all enclosed in entomological boxes, in an attempt to grasp the elusive, to freeze a moment. These concerns sit at the core of my practice. 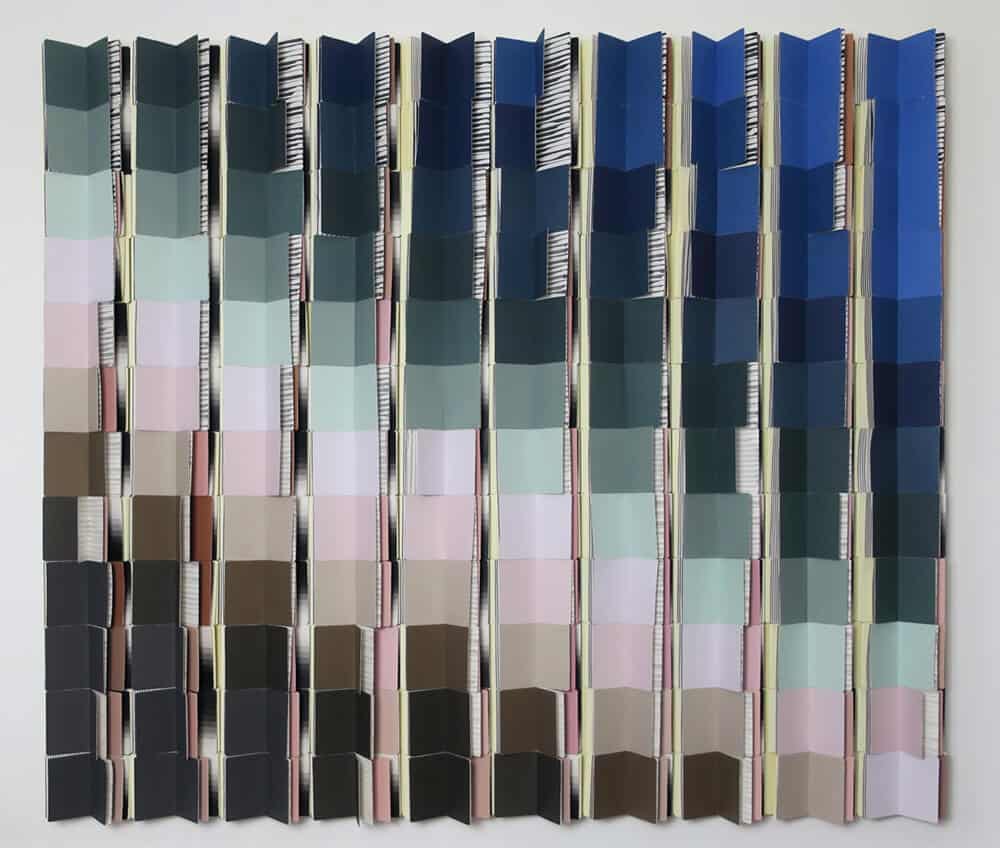 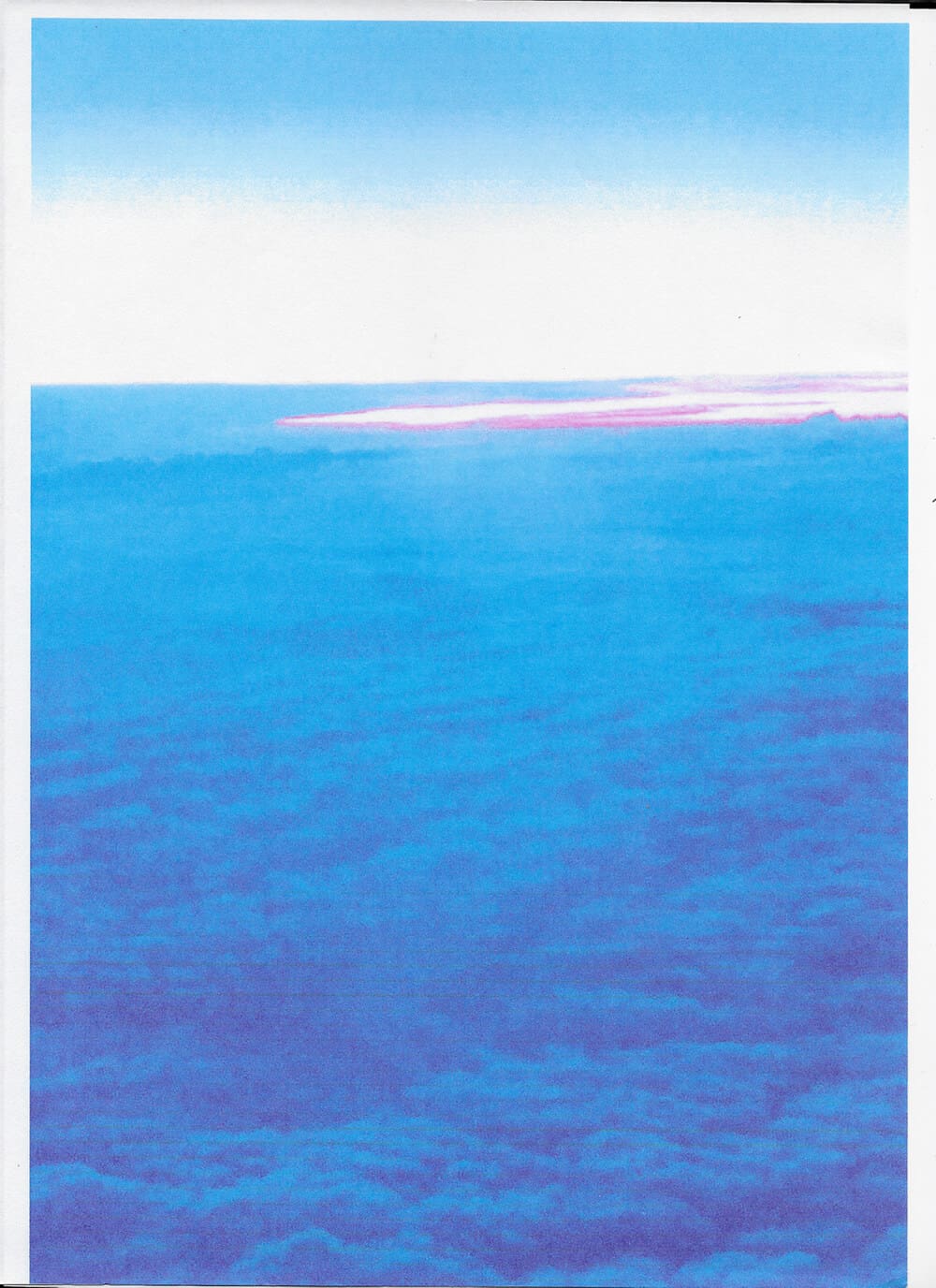 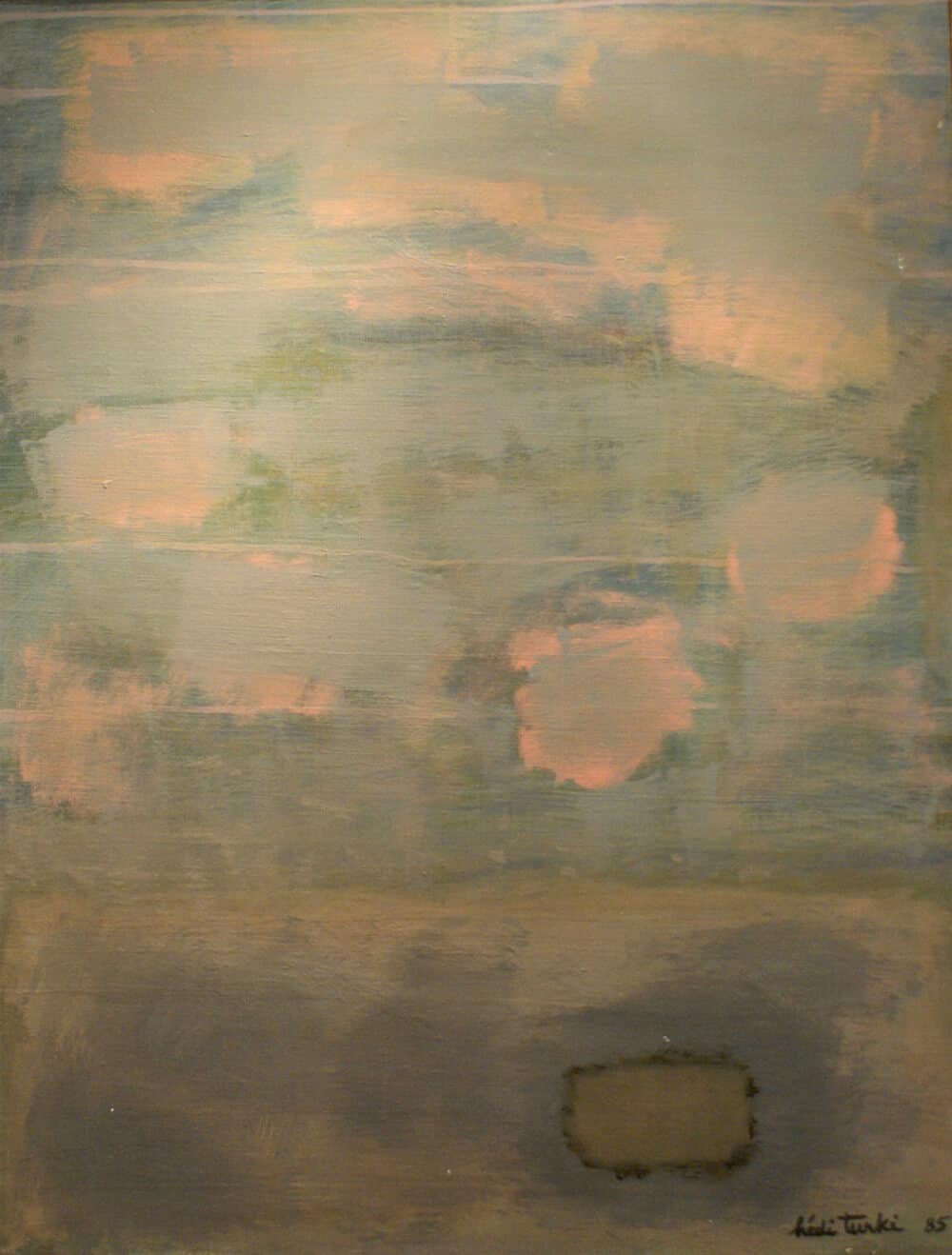 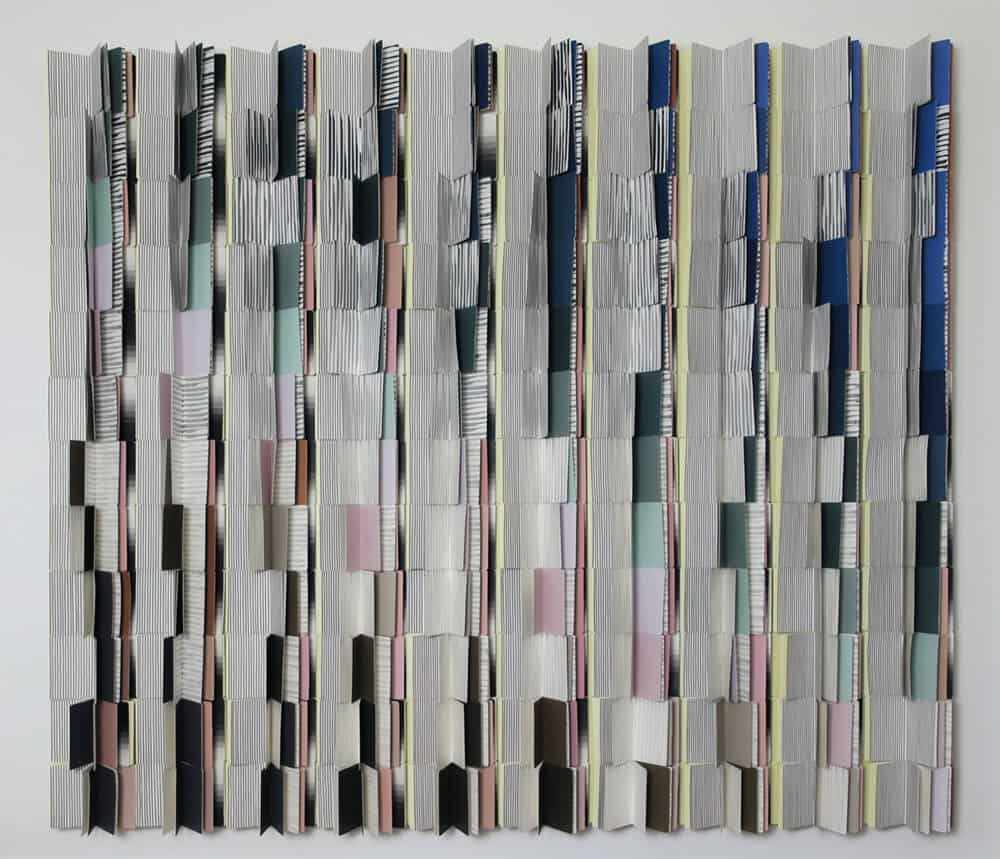