in AFRICAN ART, ART FAIR, CONTEMPORARY ART, CURATED, CURATOR, EVENT, EXHIBITIONS, INTERDISCIPLINARY, LAUNCH, NEWS, PHOTOGRAPHY, VISUAL CULTURE
Share on facebook
Share on twitter
Share on email
Share on whatsapp
ART AFRICA magazine is pleased to announce this exciting event, which is certain to make a considerable contribution to the development of contemporary art from Africa and the diaspora. As an introductory note, we are thrilled to announce our illustrious line-up of international curators for this inaugural event, which will take place between the 24th February – 5th March, 2017 at the V&A Waterfront in Cape Town. 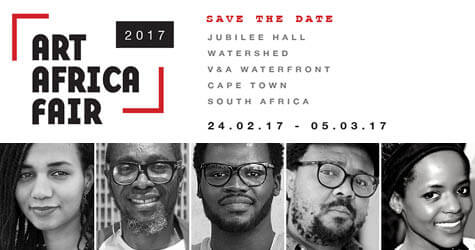 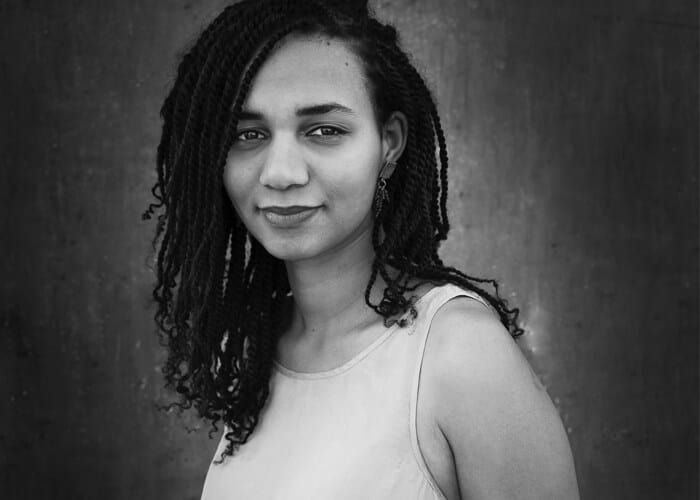 We are pleased to announce that curator and writer Salimata Diop has joined the BRIGHT YOUNG THINGS programme and will be the curator for our innaugural exhibition and residency award. Salimata is the Artistic Director of the highly successful innaugural edition of the international art fair AKAA (Also Known As Africa) in Paris, 2016.

Salimata directed the Cultural Programming at the Africa Centre, UK (2014-15) and has curated a number of solo and group exhibitions in Senegal, France, and the UK, including: ‘RETREAT IN DELUSION: Photographic paintings by Christine Muraton’ at the ‘Comptoirs du Fleuve’ (Dakar Biennale: 2016); ‘XEET’ at 50Golborne gallery; and ‘53 Echoes of Zaire’ at Sulger-Buel Lovell gallery (London, 2015). She has written and edited exhibition catalogues, including a book on artist Soly Cissé for the major exhibition ‘UNIVERS/UNIVERSE,’ which she also curated as part of the Dakar Biennale, 2014.

In 2012, she worked as Art Advisor on the series of documentaries African Masters, directed by Andy Mundy-Castle and produced by The Africa Channel UK. African Masters visited studios in Senegal, galleries in New York, artistic residencies in Nigeria, auction houses in London, and reveals the vibrant art scene emerging through in-depth interviews with world-renowned artists and key players in the art world, including El Anatsui; Yinka Shonibare; Mary Sibande; André Magnin (French art dealer) and Bisi Silva (Curator at the Centre for Contemporary Art in Lagos). 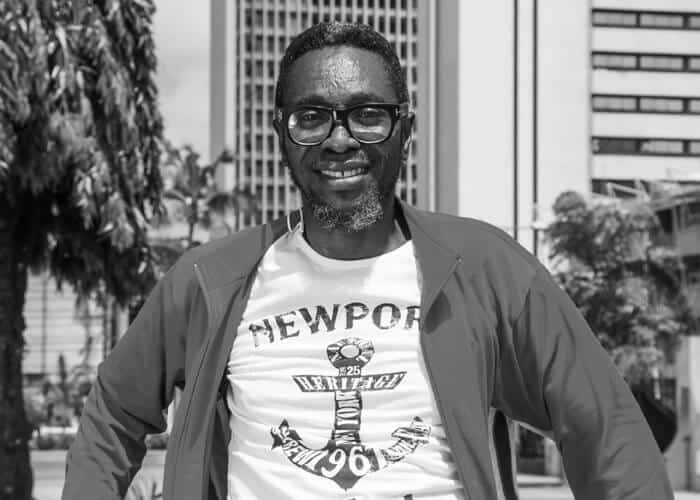 Uche Okpa-Iroha lives and works in Lagos, Nigeria as a photographer. An ex-resident and Alumnus of the Rijksakademie van Beeldende Kunsten (2011-12), he is a founding member of the Nigerian-based Blackbox photography collective, the Invisible Borders Trans-African Project (2009), as well as the founder/director of the Nlele Institute (TNI) and Lagos OPEN RANGE. A passionate educator, Uche has played a pivotal role in building awareness and engagement with photography and lens-based media in Nigeria. He is also the co-founder of the photography and video art night of projections – FOTOPARTY Lagos – and is the curator for the GT Bank ART 635 Gallery.

As a photographer, Uche is the only artist to have won the Seydou Keïta Award for photography twice; first in 2009 for his project Under Bridge Life at the 8th Bamako Encounters, and then six years later at the 10th Bamako Encounters for The Plantation Boy (2015). In 2015, Uche showed his work at the 56th Venice Biennale, ‘All The World’s Futures’ (Invisible Borders Group Exhibition); ‘Sights and Sounds: Nigeria’ at the Jewish Museum, New York; Finissage Videonale. 15 in Lagos; and ‘Changing City – Shifting Spaces’ at the Kunstmuseum, Bonn, Germany. 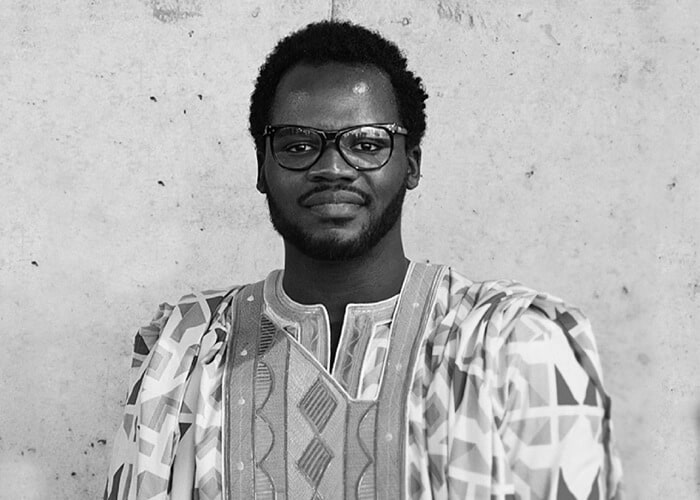 Polymath designer, artist, and cultural entrepreneur Pierre-Christophe Gam explores the legacy of pre-and-post-colonial ideas developed by Pan-African thinkers. He is interested in evaluating how current social and political changes in Africa and the diaspora negotiate with past intellectual and visual heritage.

Using food, photography, collages, set design, drawing, and digital manipulation, he creates ambiguous yet compelling compositions, where deep cultural references are mixed-up and juxtaposed in a rich and intricate tapestry. Beyond the visual seduction of his work, Pierre-Christophe questions the making of power and influence.

Gam trained as an interior architect at the École Nationale Supérieure des Arts Décoratifs in Paris and Central St. Martins in London. In his professional career, he has specialised in art direction for leadingcontemporary luxury brands and is the founder of Afro-Polis, a cultural platform that aims to create a multi-dimensional exploration and critical discovery of Africa’s cultural DNA.

Pierre-Christophe was the curator of the 2016 Vitra Campus Summer party and formed part of the advisory board of the acclaimed touring exhibition ‘Making Africa: A Continent of Contemporary Design’. Over the course of his career he has exhibited at the Kunsthal Rotterdam (Rotterdam, 2016); Unseen Festival & Photo Fair (Amsterdam, 2016); Centro de cultura contemporania de Barcelona (Barcelona, 2016); Vitra Design Museum (Weil am Reim, 2015); Guggenheim Museum (Bilbao, 2015); 50Golborne (London, 2015); and Lagos Photo Festival (Lagos, 2014).

We are excited to announce that Pierre-Christophe Gam will be curating our VIP Lounge and Social Hub spaces. Designed for the purpose of exchange, these spaces will encourage a relaxed, engaging environment for artists, gallerists, collectors, and thought-leaders to mingle and interact. Pierre-Christophe will also be presenting his latest body of work for the very first time at the ART AFRICA FAIR as a solo exhibition.

Mentor-Mentee dialogue for the curation of ‘South Africa: Contemporary Art Now’ at the ART AFRICA FAIR, 2017. 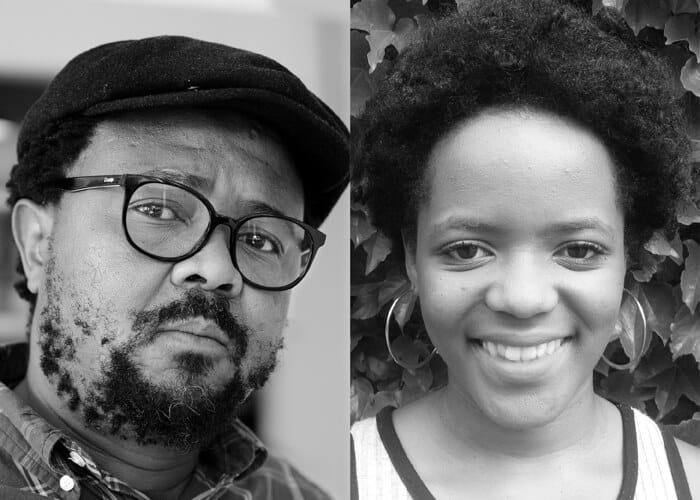 Ruzy Rusike is an artist and aspiring curator, who graduated with a BA in Fine Art at the University of Witwatersrand and is completing her Honours in Curatorship at the Michaelis School of Fine Art. Rusike is currently an intern at Gallery MOMO, having also interned for the African-American artist Ayana V. Jackson and the Johannesburg-based initiative Assemblage. Ruzy also works as the Head of Communications for The Southern African Foundation For Contemporary Art (S.A.F.F.C.A.), which is a Non-Profit Company.

As a young curator, Ruzy worked with Thembinkosi as the Curatorial researcher and Exhibition co-ordinator for the touring exhibition ‘Towards Intersections: Negotiating Subjects, Objects and Contexts’ hosted at the UNISA Art Gallery, Pretoria; Museum Africa, Newtown, Johannesburg; and the Gordon Institute Of Business Science, Hyde Park, Johannesburg. As well as curating her own exhibition at ’The Point of Order’ (Braamfontein, Johannesburg) titled ‘Introspection… Where art thou?’ Ruzy also curated ‘The Creative Exchange: Coalition’ (Wits School of Arts: 2014), ‘WITS REVISITED: Race, Representation and Memory’, (Wits University: 2014) and ‘The Creative Exchange: Condensed Form’ (Wits School of Arts: 2013).

Please join us next year in Cape Town as we celebrate this innaugural event at the Jubilee Hall, Watershed, V & A Waterfront, Cape Town from the 24th February – 5th March, 2017.