in News Articles 2013
Share on facebook
Share on twitter
Share on email
Share on whatsapp
Following the success of the Artes Mundi 6 Prize, awarded to Theaster Gates earlier this year, Artes Mundi has announced the shortlist for Artes Mundi 7, the seventh edition of the UK’s leading biennial art prize. Seven of world’s most celebrated contemporary artists make up the shortlist, selected from over 700 nominations spanning 90 countries, and we at ART AFRICA are excited to see that contemporary artists from Africa and the diaspora have been represented! 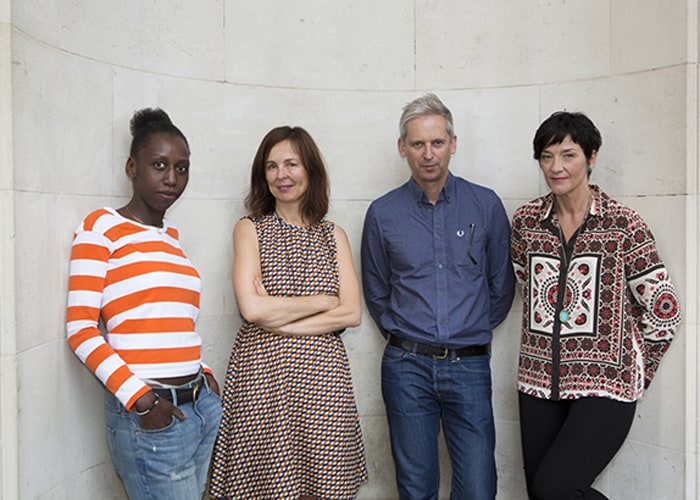 ABOVE: Artes Mundi Director and Curator Karen MacKinnon (right) with the selectors for Artes Mundi 7, (left to right) Elise Atangana, Marie Muracciole and Alistair Hudson. Photo: Eva Bartussek.
Of the seven artists selected from across the globe, three on the list for the prestigious Artes Mundi 7 prize are from the continent or the diaspora. The selected artists, announced this past weekend, are as follows:
John Akomfrah (Ghana/UK)
Neïl Beloufa (France/Algeria)
Amy Franceschini / Futurefarmers (USA/Belgium)
Lamia Joreige (Lebanon)
Nástio Mosquito (Angola)
Hito Steyerl (Germany/Japan)
Bedwyr Williams (Wales, UK)
Artes Mundi 7 will present a major exhibition of seminal and new works by the shortlisted artists from October 21, 2016 to February 26, 2017 at National Museum Cardiff and Chapter, Cardiff. The winner of the prestigious 40,000 GBP Artes Mundi Prize will be announced in January 2017, following the four-month exhibition of works by the shortlisted artists.
Artes Mundi 7’s selectors — Elise Atangana, an independent curator based in Paris and Cameroon, Alistair Hudson, Director of Middlesbrough Institute of Modern Art, and Marie Muracciole, Director of the Beirut Art Centre — sought artists who directly engage with everyday life through their practice and who explore contemporary social issues across the globe.
Karen MacKinnon, Artes Mundi’s Director and Curator, says, “These amazing artists bring their own unique perspectives to work that explores what it means to be human in contemporary society. Whether introspective and deeply personal or engaged with broader social and cultural issues, each artist demonstrates the importance of art and culture in our everyday lives, challenging our preconceptions and opening up new ways of engaging with the world around us.“
John Akomfrah OBE is a renowned director, writer and theorist known for ground-breaking films such as The Stuart Hall Project (2013). Neïl Beloufa is known in the UK for his widely reviewed 2014 ICA show, Counting on People. Amy Franceschini is the founder of the Californian artist and farming collective Futurefarmers, which focuses on creating international projects that challenge systems of food production and transportation.Lamia Joreige was the first female Lebanese artist to be internationally recognised, and the first to have a major work acquired by Tate. Nástio Mosquito was recently named in The Guardian‘s list of Ten African Artists to Look Out For, following his first UK solo exhibition at Birmingham’s Ikon Gallery. You can have a look at our interview with Mosquito here. Hito Steyerl’s surreal videos set in the “post-Internet age” have won her multiple awards. Bedwyr Williams is one of the UK’s most sought after artists and is celebrated for his work representing Wales at the 55thVenice Biennale.
Marie Murraciole, Beirut Art Centre Director commented, “The selection process became part of a long term discussion we are all having about art and the ‘politic’:  how art is linked to a historical context and a project of emancipation, but also  how a work of art is an ‘act’ in itself, and doesn’t have to apply any program or promote a message. These two extremities were the main challenge, and we came from different perspectives, which made the conversations very interesting (and fun).”
Alistair Hudson, Director of MIMA added, “The selection process became quite a lively interrogation of the motivations, ambitions and effects of the artists under consideration and, by extension, artists working in the world today—why make art and what for? As a selector this was also a process that helped shape our thoughts on the state of art and what we, as selectors with very distinct perspectives, think constitutes a representative picture of art today.”
As well as the Artes Mundi 7 Exhibition and Prize at National Museum Cardiff and Chapter, there will also be an extended programme across the city, held in partnership with other organisations.
We will certainly be keeping our eye on the progress!