in News Articles 2013
Share on facebook
Share on twitter
Share on email
Share on whatsapp
As issues relating to freedom of expression make news, the former police minister has finally spoken out on the controversy surrounding Exhibit B, saying that, “We’re not all going to agree on what everybody does. What is important is that people must dialogue. We must ensure that nothing is a holy cow.” 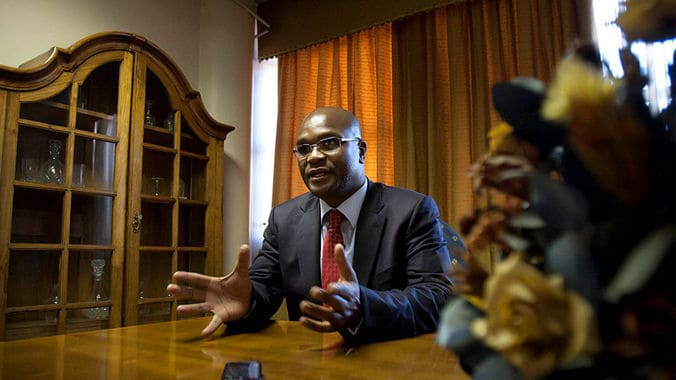 ABOVE: Minister of Arts and Culture, Nathi Mthethwa, speaking on South African artist, Brett Bailey’s, Exhibit B. Image courtesy of Mail&Guardian.
“Just because we’re in a free and democratic South Africa doesn’t mean to say you can do things that are racially discriminatory and think that people are going to laugh, or that everything is going to be fine,” Minister of Arts and Culture, Nathi Mthethwa, said. Discussing freedom of expression in the arts, Mthethwa responded to questions on the controversy surrounding South African artist Brett Bailey’s exhibition Exhibit B, which was shut down in London in September. “We’re not all going to agree on what everybody does. What is important is that people must dialogue. We must ensure that nothing is a [sacred] cow.”
Despite encouraging freedom of expression and debate in cultural society, the minister said that artists should “be sensitive of not driving things back into the past. When people do their artwork, they should do it sensitively of human rights and individuals’ rights, while ensuring that they express what they feel they should express”. This is the first time the minister has spoken publicly about the live exhibition on slavery, famously dubbed the “human zoo”. Exhibit B – a development of the exhibition Exhibit A, which Bailey staged at the National Arts Festival in Grahamstown in 2012 – aims to tell the stories of African slaves and asylum seekers under British colonialism. The show uses black actors in a series of live scenes.
Wearing a navy blue suit, the minister of police at the time of the Marikana massacre – in which 34 miners were shot and killed by police – advised artists to consider the Constitution when making artwork. Even when artists are “critical of the present, they should do that within the parameters of the Constitution”. At the Marikana commission of inquiry in July, Mthethwa refused to take responsibility on behalf of the state or police for the striking miners who were fatally shot, or for the more than 70 who were wounded by police. At the time, Mthethwa faced accusations that it was his alleged intervention in the operations at Marikana that may have triggered the ensuing killings.
Despite not being aware of the Dookoom drama that erupted when the Cape Town-based collective launched their music video for Larney Jou Poes!, Mthethwa did, however, respond to other questions on freedom of expression. When asked whether attempting to be sensitive to all South Africans and the constitution does not, in itself, constitute a form of self-censorship, the Minister responded, “But where do you stop [when making art]? You can’t support a situation where rampant racism and a colonialist mentality is promoted,” he said. “You can’t say that you’re coming from a racist past and then promote racism.” 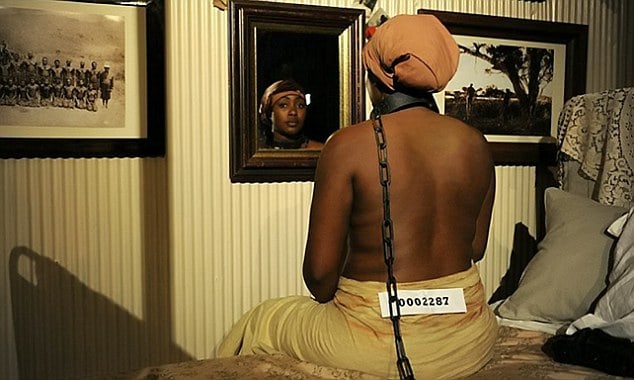 ABOVE: Image from Bett Bailey’s Exhibit B. Image source: Daily Mail Online.
In a statement published by Bailey following the exhibition’s closure, the artist wrote: “The intention of Exhibit B was never hatred, fear or prejudice. It is about love, respect and outrage. Those who have caused Exhibit B to be shut down brand the work as racist. They have challenged my right, as a white South African, to speak about racism the way I do. They accuse me of exploiting my performers.”
London performers who participated in Exhibit B also expressed their disappointment in the show’s cancellation. “We are appalled, outraged [and] extremely angry as artists, as human beings. We cannot believe that this is London in 2014,” they wrote in a statement at the time. “We are appalled that Exhibit B has been cancelled because of the actions of some of the demonstrators.” The actors and performers said that the 23 000 petitioners who complained that Exhibit B objectified human beings had “missed the point”.
“If people who are Africans [in the diaspora] feel that what Bailey was doing is condescending, it’s their right to voice that,” said Mthethwa. “As much as he should be respected. You can’t say to people that they cannot dialogue – that would be prescribing to society.”
Birmingham-based activist and journalist, Sara Myers led the campaign against Bailey’s show. Britain’s first black Cabinet minister, Lord Boateng, was among those protesting against the showcase. “This was a vanity project. Having people objectified in this humiliating way was always going to cause a fierce reaction,” said Simon Woolley, co-ordinator of Operation Black Vote and a former equality and human rights commissioner. “It is a shame that it reached this stage but the feeling was that no one was listening.”
Following Exhibit B‘s cancellation, Woolley said, “Even when we agreed to disagree with the art gallery, we made it absolutely clear we were not calling for a ban or censorship. We [protesters] wanted Bailey and the Barbican to realise that, one, they were not helping us and, two, we found it deeply offensive.”
The Bailey exhibition is currently in tour in Europe.
Don’t miss ARTsouthAFRICA’s exclusive interview with lead petitioner against Exhibit B, Sara Myers, in the upcoming December Issue (13.2)!
This article, written by Stefanie Jason, originally appeared on the Mail&Guardian Website on 20 October 2014.