ARTsouthAFRICA is pleased to announce our partnership with the Johannesburg Pavilion (JP) at this year’s 56th Venice Biennale (9 – 15 May 2015), for which we will be an exclusive digital publisher for current, on-the-ground news and information. Follow our Facebook page for daily updates and stay in the know with JP’s takeover of our Twitter and Instagram accounts! We’ll also be publishing a weekly round up of their daily diary entries in the ARTsouthAFRICA newsletter. For now, find out a bit more about JP and have a look at what to expect from this exciting fringe programme at the Venice Biennale… 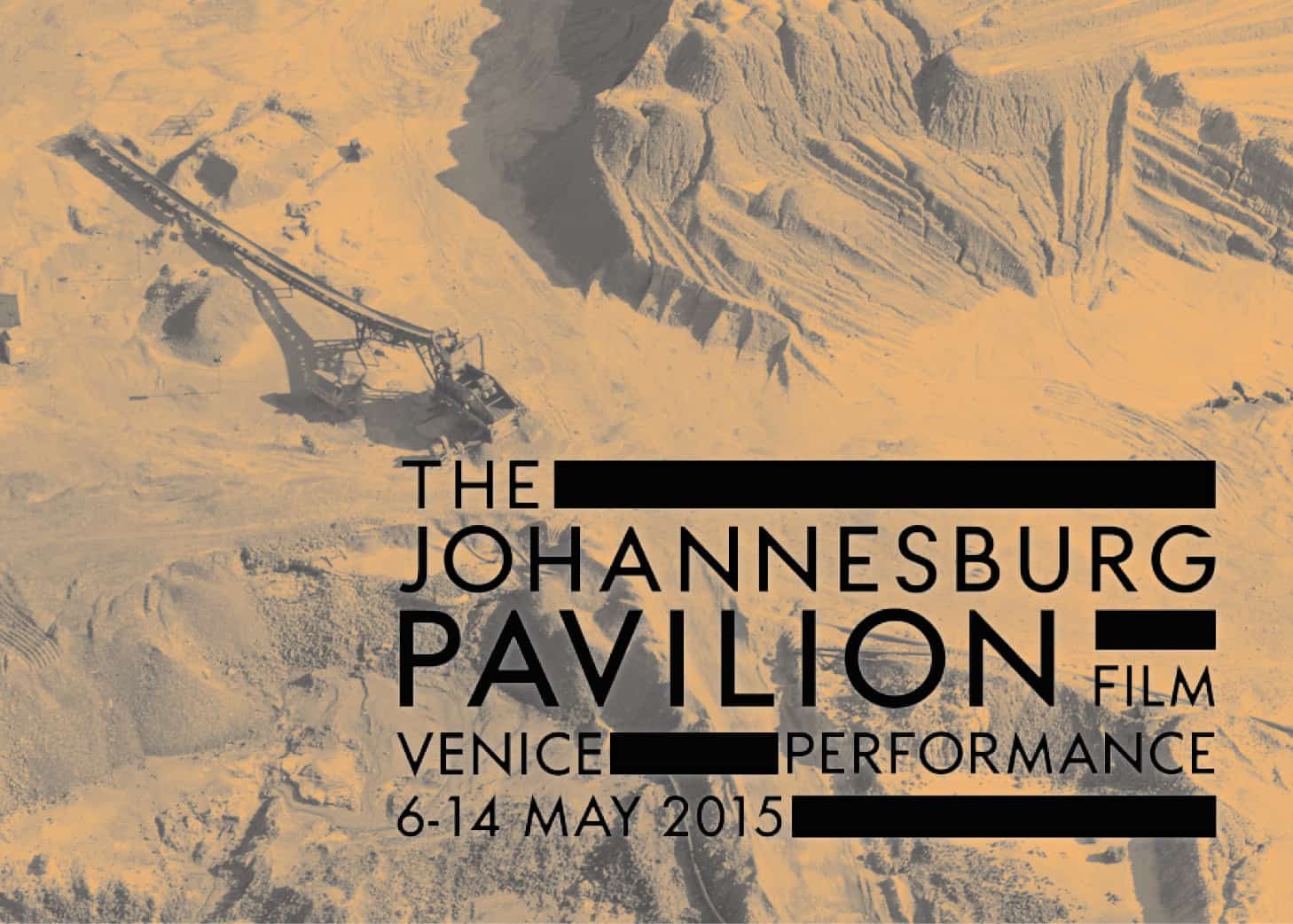 The Johannesburg Pavilion (JP) is a programme of contemporary African film and live performance that will travel to Venice during the first two weeks of the 56th Venice Biennale. The project is a partnership between the 133 Arts Foundation & the FNB JoburgArtFair and developed in memory of the final Johannesburg Biennale curated in 1997 by Okwui Enwezor, the current and first African Director of the 56th Venice Biennale 2015.

Initiated by a collective group of artists, writers and curators, the project encapsulates the spirit of the expansive and mythical African city of Johannesburg, both in its provocative title as a non-official ‘city pavilion’, and as a temporary intervention in the everyday urban fabric of the city of Venice.

“Two passports – one expired, the other marked VOID – lie half-hidden in a pile of charred rubbish. The small discarded documents are bound together by a partially melted elastic band. Across the intersection, the hunched figure of the Sack-and-Ash man, sitting beside a small fire, warming his hands on this cold dry highveld winter’s day: Res Derelictae. Things abandoned.

      Abandoned, yes … but by engaging thoughtfully with what has been left behind, and with what remains outside the dominant perception, artists can hold all of our histories, personal and communal, and produce new narratives for our time.” – Roelof Petrus van Wyk, 133 Arts Director and The Johannesburg Pavilion 2015 Organiser.

“The lived experience of Johannesburg’s complex history and present-tense is the focus of this civic Pavilion at the 2015 Venice Biennale. Inherent to the idea of a Johannesburg Pavilion is the impossibility of recreating or representing a holistic environment. This Pavilion does not purport to that. Instead, it is an examination of the city – the cartography of which, as evidenced in the works of the chosen artists, manifests a multitude of attendant dichotomies and micro-narratives.

Part political statement, part response to this year’s Biennale theme, the Pavilion’s programme is, at the same time, constituted of a series of singular and idiosyncratic meditations on life in this disruptive and fantastic African metropolis.

 There is no desire to create the city in facsimile, but rather to explore the personal and the oblique within it, and to examine how this exploration can be used to forge fresh, alternate spaces.” – Lucy MacGarry, Curator, FNB Joburg Art Fair and The Johannesburg Pavilion 2015 Organiser. 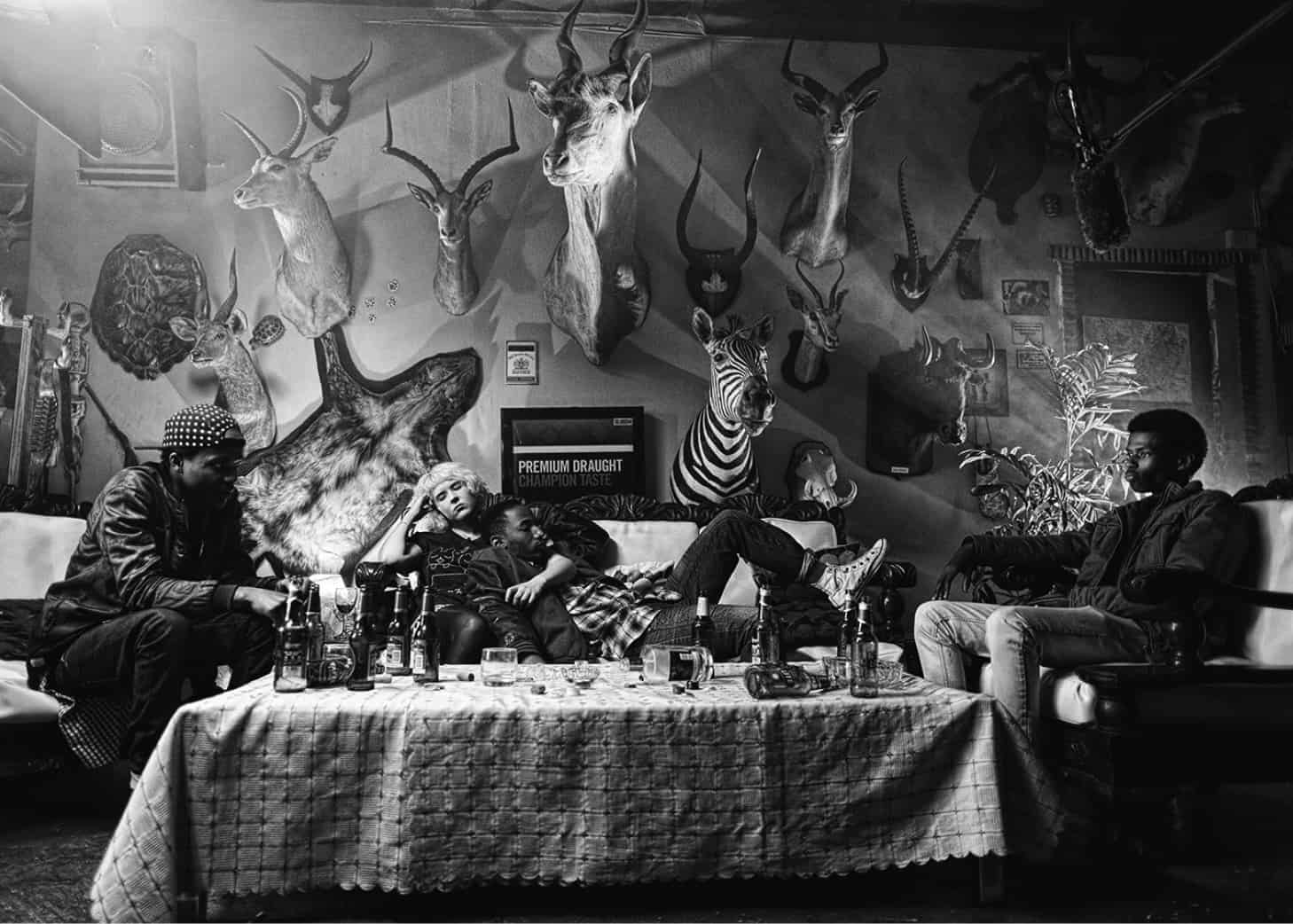 ABOVE: Still from Necktie Youth by Sibs Shongwe-La Mer.


Sibs Shongwe-la Mer and his film, Necktie Youth, and the directorial team of Arya Lalloo and Shannon Walsh with their film, Jeppe on a Friday, investigate Joburg’s underbelly – albeit on opposite ends of the income scale.

Donna Kukama swings from one of the concrete highway bridges and, while throwing money to street traders beneath, falls and breaks her leg in The Swing.

Riaan Hendricks’s lens in The Bridge observes the human traffic on the Nelson Mandela bridge, suspended across the railroad tracks separating the CBD from the North.

Nicolas Boone and his camera, unwaveringly on the heels of untrained actors re-enacting real-life stories, traverses the highly contested urban spaces of the inner-city in Hillbrow.

Athi-Patra Ruga is (re)writing the future history of The White Women of Azania. 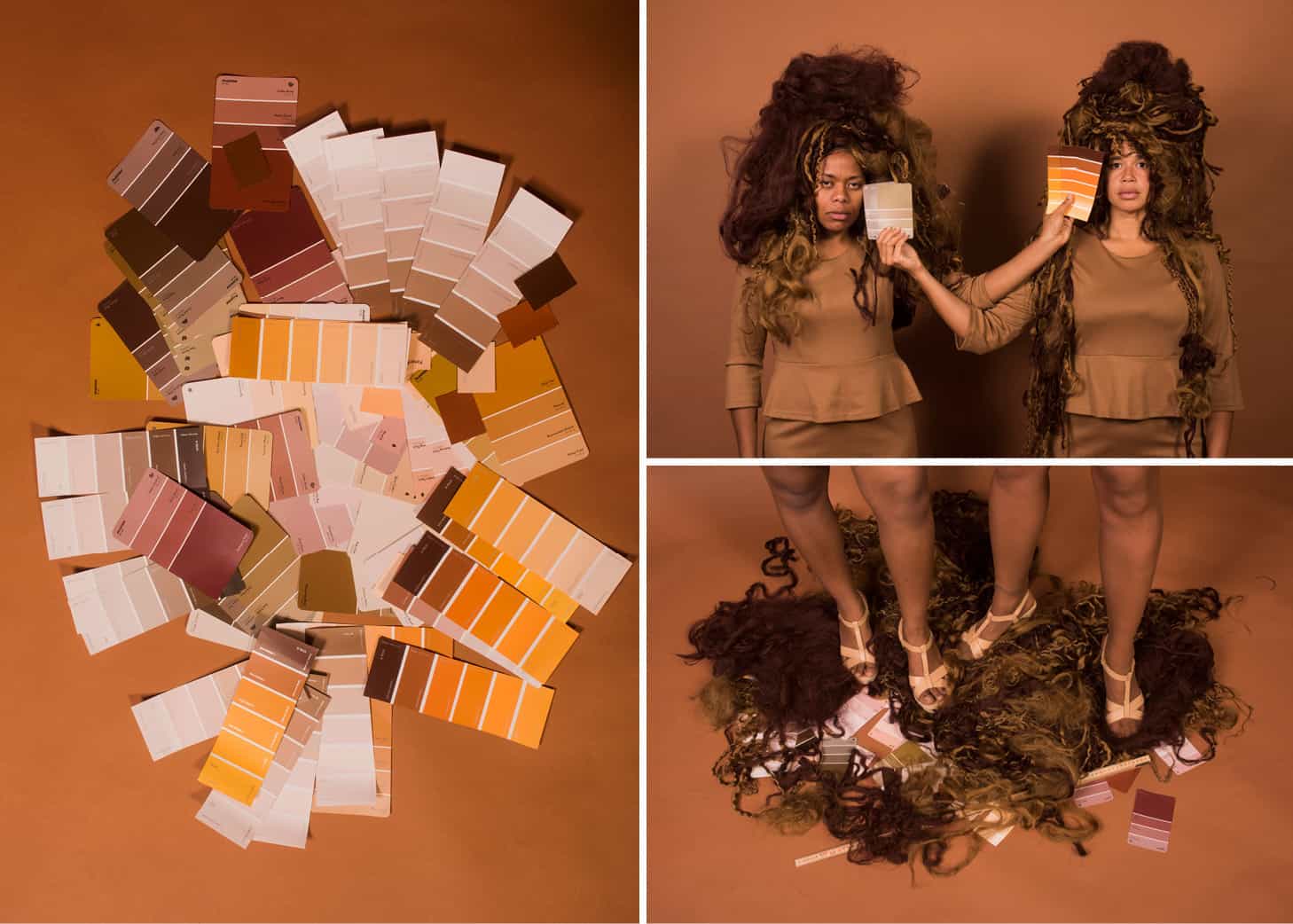 Blurring the boundaries between street performance and theatre, Jemma Kahn and Roberto Pombo, act out various narratives through drawings and storytelling, while Mandi Poefficient Vundla delivers powerful Spoken Word poetry that speaks to the heart and gets close to the broken bone.

An ascent, a landing, an arrival, a departure, a recollection, the description of a scene, the flashback, waiting, scrolling, falling, watching, the reversal. Bettina Malcomess in meditative motion.

Bogosi Sekhukuni walks the electronic superhighway and meditates on the deferred rainbow dream, and Anthea Moys attempts to break the rules of the game, injecting chaos into its structure, as she explores the intersection of art and play and questions the meaning of failure.

Thenjiwe Niki Nkosi & The Dulibadzimu Theatre Group, along with Dan Halter, trace the meaning of the river separating South Africa and Zimbabwe. Kudzanai Chiurai, born in Zimbabwe, and now resident there again, explores a utopian notion of statehood in his second home, South Africa.

Michael MacGarry meditates on the new scramble for Africa, investigating the banal poetics of instant, empty cities built by Chinese migrant workers in Luanda, Angola. His work is instantly localised when a Hong Kong-based Chinese company announces its intention to build a new financial centre “on a par with cities like New York and Hong Kong in the Far East” – a gateway for Chinese firms investing in Sub-Saharan Africa…

Itchy City is a five-minute sequence where, together with Jyoti Mistry, elements of Kgafela Ao Magogodi’s live performance are superimposed with real and painted city views of Johannesburg to create a powerful commentary on everyday life and absurdities in a city with an “itching soul”. If this be a city by Nduka Mntambo, pushes discursive and aesthetic choices offered by the film. 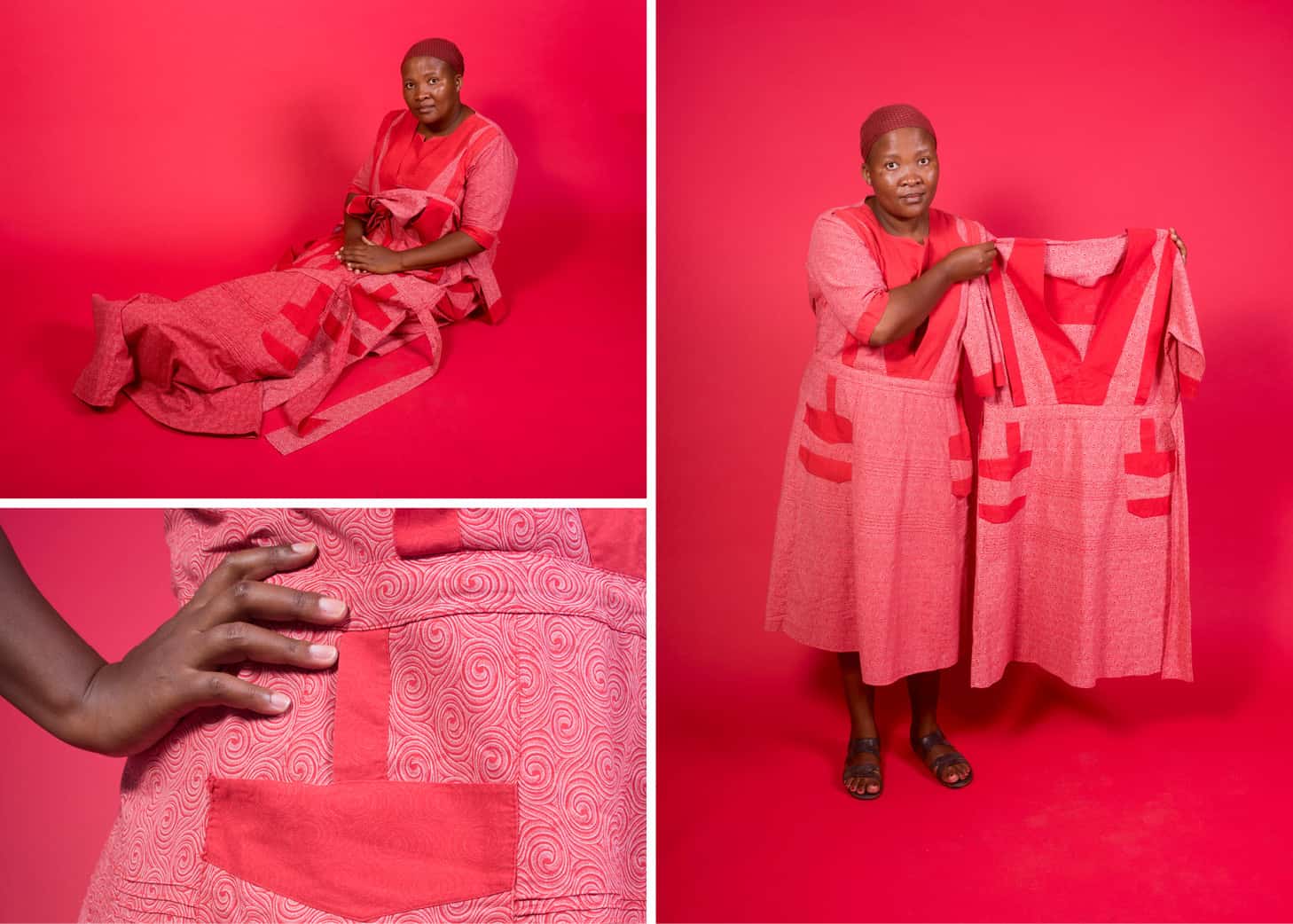 The selected artists work largely in the mediums of film and performance. Each has an affiliation with Johannesburg, claiming (or disclaiming) a unique connection with this place they call, alternately, Johannesburg, Joburg, Jozi, Egoli (City of Gold).

ALBERTA WHITTLE and FARIEDA NAZIER, invite audience members into their ‘office’, to be racially classified in the project RIGHT OF ADMISSION. Everyone’s Welcome.

ALBERTA WHITTLE and FARIEDA NAZIER, perform a Journey Of Aspiration, starting with a public grooming at the Photissima Art Festival to engaging with luxury brands in their retail environments, ending by looking for the popular counterfeit version of the same brands on St. Marco Square, 11am-5pm. Everyone’s Welcome.

8 May 2015 SENZENI MTHWAKAZI MARASELA performs the character THEODORA HLUNGWANE on a daily basis but will also be on her knees, drawing on the flagstones of the public space of Campo San Giacomo dall’Orio, 30135, 11am – 1pm.

An installation of MARASELA’s drawings will be on View on this day ONLY at The About Artist Studio, Santa Croce 1165, 11am-5pm. Everyone’s Welcome.

MANDISA POEFFICIENT VUNDLA will perform a set of SPOKEN WORD poems from the streets and hearts of the townships of Johannesburg.

The South African Pavilion, The Arsenale, 11:30am.

STREET PARTY by the Johannesburg Artists for their fellow Venetian Artists.

10 May 2015 JEMMA KAHN & ROBERTO POMBO in We Didn’t come to Hell for the Croissants. Seven Deadly New Stories for Consenting Adults performed on stage in The About Artist Studio, 7pm-8pm. Everyone’s Welcome. 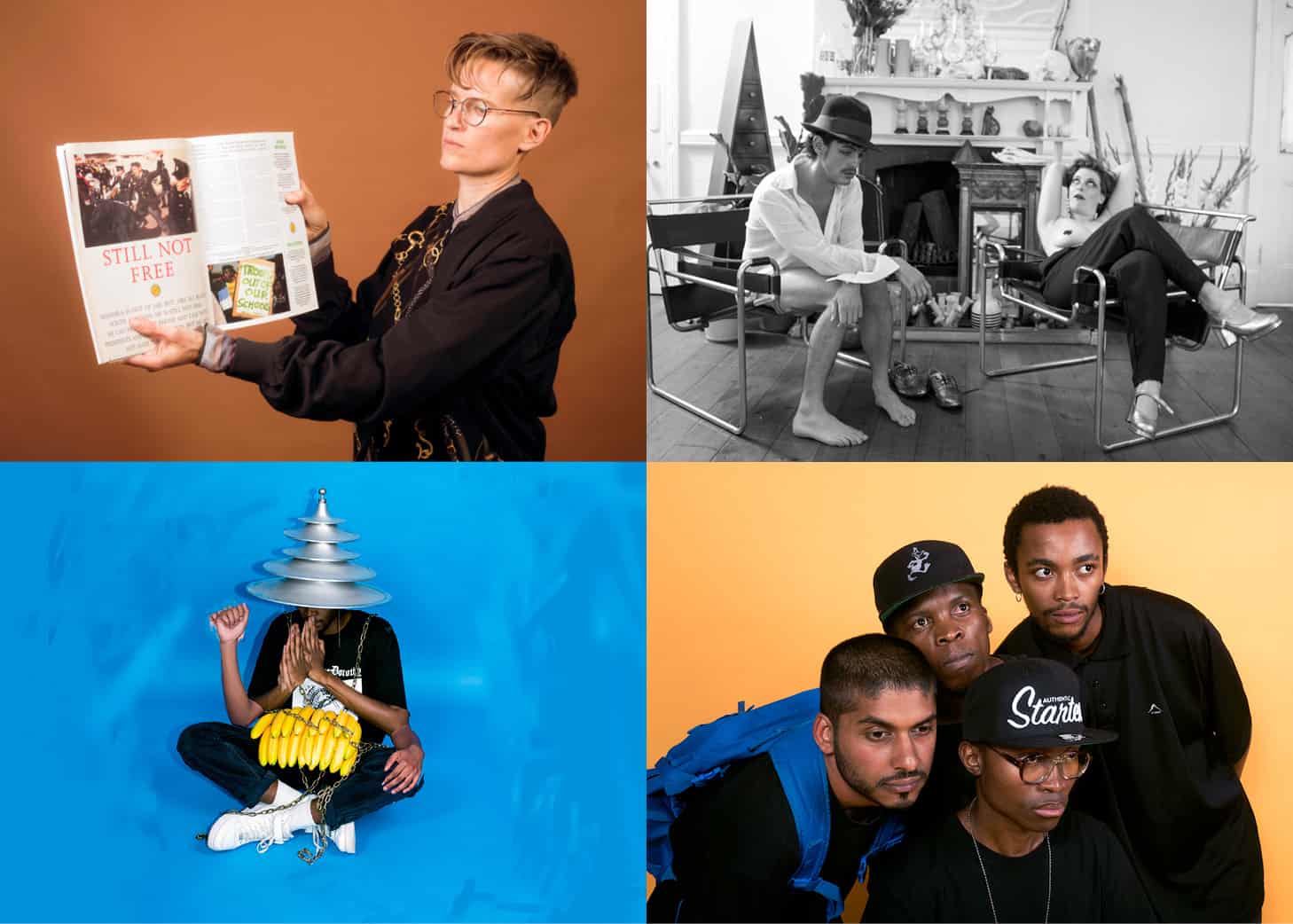 We can’t wait to see what comes out of this compelling collaborative effort from Jozi. Keep your eyes peeled!