in COLLAGE, CONTEMPORARY ART, EXHIBITION, IDENTITY, REVIEW
Share on facebook
Share on twitter
Share on email
Share on whatsapp
One cannot contemplate the concept of ashes and dust in relation to the arts and not talk about the recent sharp-turn taken by one of the most contemporary South African collagists, John Vusi Mfupi. Those who have studied and familiarised themselves with Mfupi’s work over the past decade or so, would agree that he is no longer collaging but shepherding the lives of those depicted in his work from dark flames and ashes into the public view. Over the past two years he has perfected the art of using ashes to give greater resonance to the stories he tells. 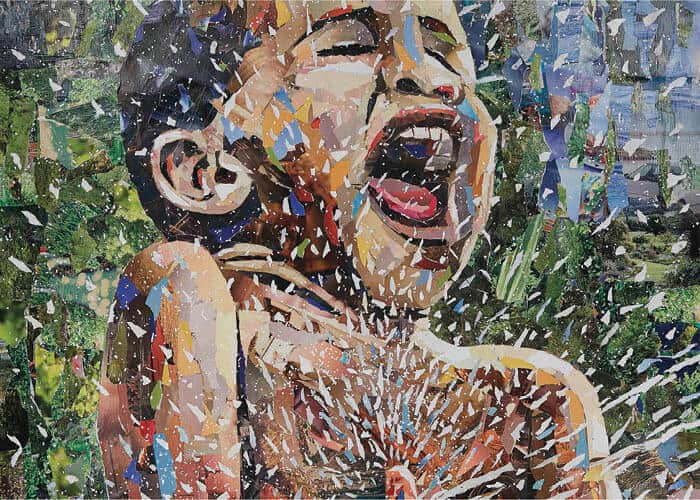 “South Africa is on fire. Seeing institutions like schools, varsities and libraries go down in flames rang a bell that something was totally out of hand in South Africa,” said Mfupi in an interview with ART AFRICA before the opening of his exhibition. The subject he is now tackling is current, and of great importance. One could easily think of him as an artist who pushes the ‘affirmation of state of emergency’ in his work. Like other activists, academics, politicians, and economic analysts, Mfupi refuses to be quiet when his country is physically burning. Today as we speak, there are movements surfacing – #RhodesMustFall, #PretoriaGirlsHigh, #FeesMustFall – which expose strong intergenerational gaps that speak to socialisation processes in a multicultural democracy. The Vuwani community protests in Limpopo, which led to twenty-four schools being torched, adds to the wide range of political unrest in post-apartheid South Africa.

Knowing Mfupi personally, I marvel at the fact that he still has a soft spot for community arts development, especially for youth. The burning of community properties such as schools, libraries, and books is of great concern. So disturbed by the nationwide violent protests around education, Mfupi decided to use the burned paper from flames and ashes as a metaphor for unity against the disruption of our children’s education. In his collage piece, I Have A Dream, for an instance, you are confronted with the image of an innocent boy whose eyes tell the story, one of both gravity and dreams. Yet the reading of this portrait does not end with the austerity and determination of this successful portrayal in facial gesture, but continues to enchant your eye, nudging your conscience to a brimful appreciation of Mfupi’s articulate skill and delivery of medium.

The issues surrounding the education protests are but one example of how our democracy – as a concept – serves only those who benefited from apartheid and the few elites who spearheaded the democratic project. According to our constitution, everyone has the right (a) to basic education, including adult basic education’; and (b) education, including adult basic education. After two decades of constitutional enactment, however, South Africa remains one of the most unequal societies in the world. It seems that this basic right doesn’t apply to most children in rural South Africa, especially because the state can drag its feet when it has to intervene in protests. Any dissatisfactions that students may have – especially those who carry unequal financial pressures – fall on deaf ears, and instead, students are confronted with crippling study loans, debt, and black-tax. 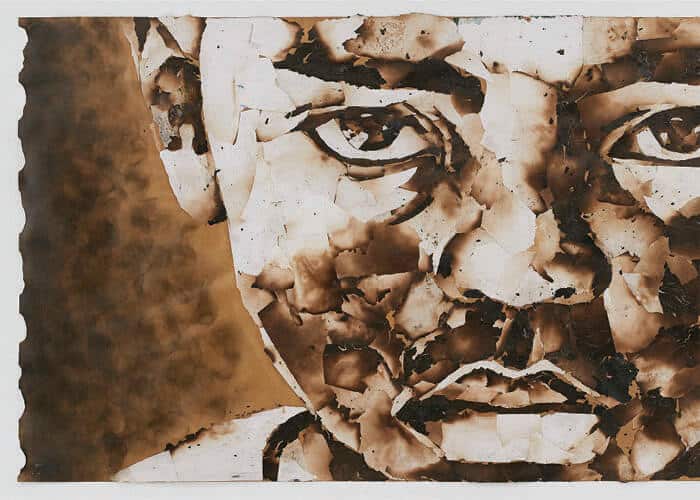 Free, accessible education has to do with the long-term education of future generations of South African citizens in order to widen our model of national proficiency. During the electioneering campaigns of ’94, the citizens, especially the poor and vulnerable, were sold the promise of clean water, free education, and decent jobs by the ANC-led government. Immediately after the polls the very same citizens that voted became victims because the dreams auctioned to them became valueless.

Vandalism of any genus cannot be condoned. In the same light, politicians have to be held accountable to the promises they swank to their voters. The education of our children should not be the sole responsibility of our government, but of everyone at home, within schools, and the community. In ‘Ashes To Life,’ John Vusi Mfupi reminds us to take up the same energy used in fighting apartheid by rechanneling it to build better schools in our communities, rather than burning that which already exists. If we are not happy with the education system we have, we should reconstruct it, instead of bringing it down in flames.

Khehla Chepape Makgato is a Johannesburg-based independent artist and arts writer, regularly contributing articles to ART AFRICA and The Journalist. He works at Assemblage Studios and is the founder of Samanthole Creative Projects & Workshop, a community-based art organization focusing on arts and literacy youth programmes. Chepape is the ImpACT Award Finalist for Visual Arts 2016 by Arts and Culture Trust.