Aspire went into its latest Johannesburg auction with an innovative strategic focus on quality over quantity, producing spectacular sales of works by under-represented black artists and a special section dedicated to photographs, which proved a resounding triumph, in a first of its kind in the South African auction market. The company continued its resounding success with top international artist William Kentridge, selling a characteristic charcoal drawing related to his early animated films for R3 186 400, setting the tone for the sale and bucking the trend of a relatively quiet South African auction market. 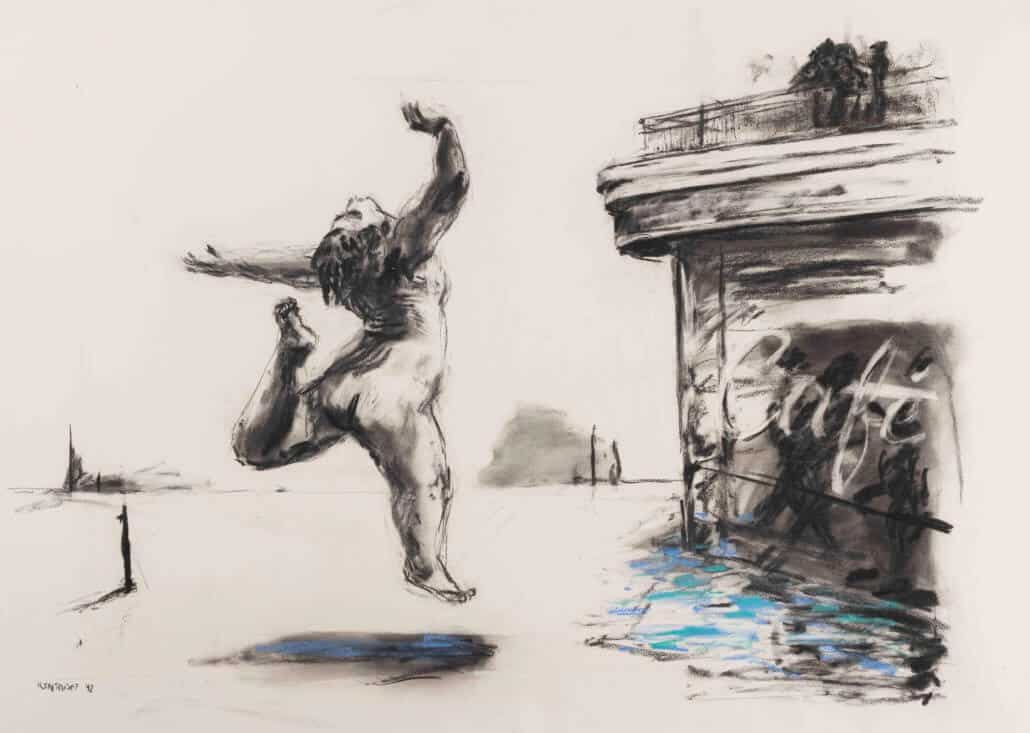 Aspire Art Auctions’ latest auction was held on 2 June 2019, at GIBS in Illovo, Johannesburg. The company is building on its reputation as a purveyor of quality rather than quantity in the fine art auction field. In refining this strategy, Aspire focuses on developing a value for its clients in newer and underdeveloped segments of the market, while still demonstrating its expertise in achieving the best prices for well-known signatures.

Aspire has already established an enviable reputation for success in contemporary art. Comments Aspire Director and Senior Art Specialist, Emma Bedford, “as the world record holder for the highest price at auction for a William Kentridge drawing, Aspire has carved out a deserved niche as the place to go for collectors to successfully sell the work of this globally-renowned contemporary artist, and we have a considerable store of in-house expertise in his work. But the value we are creating in the rest of the contemporary field should not be overlooked, and it’s of great pride to us at Aspire that we are achieving such sales in a tight market, with new, fresh signatures.” In addition to Kentridge’s performance, significant sales included Diane Victor’s accomplished drawing Stadium (from the Disasters of Peace series), which sold for R204 840, and younger contemporary artists Nelson Makamo and Blessing Ngobeni, whose top works sold for R125 180 and R147 940 respectively against high estimates of R80 000 and R120 000.

Says Aspire MD Ruarc Peffers, “While we will always look to deploy our existing expertise in selling the biggest signatures in the South African market, such as William Kentridge, we also see it as an important part of our role to actively develop value in new and emerging segments, or where real collecting gems have been unfairly overlooked in the past.”

This commitment to value creation and agility in its business strategy has led to some new innovations in this sale. While the lead lot sold was a feel-good early charcoal drawing by Kentridge, there was also a strong representation of modern and contemporary work by under-represented black artists. In addition, an audacious move by the auction house saw it launch the first special section on an auction in South Africa dedicated to fine art photography. Both the black modern and contemporary segments and the photography section broke several world and South African records.

Aspire demonstrated its ability to perform well in the market with better-known signatures with the lead lot sold by value, an ecstatic charcoal drawing by William Kentridge, depicting one of the central characters from his ground-breaking series of animated ‘drawings for projection’, Mrs. Eckstein. The work, Untitled (Woman and Café) (1992), sold for R3 186 400. Among the other traditionally strong signatures at auction, Aspire’s strong performances in the past with Edoardo Villa’s work was maintained with a price of R853 500 achieved for the Confrontation maquette, the striking, scaled down version of the magisterial 4m high steel sculpture in a Johannesburg corporate collection, which dramatizes the implicit tensions in South African society post the 1976 Soweto uprising.

The brave strategic decision by the auction house to actively create market value for works by previously under-represented and under-valued black artists from the mid-twentieth century to the present day has been vindicated in recent weeks by the authoritative survey exhibition of this historically important art staged in Johannesburg, titled A Black Aesthetic. Over a third of all works on the auction were by black South African artists, many of whom had been denied access to networks of collectors, galleries and materials in their lifetimes because of racial discrimination. The top work sold by value was an exquisite early figure study by influential painter Gerard Sekoto, whose Lady in Red (c. 1940) sold for a substantial R1 115 240. A world record of R967 300 was achieved for a suite of photo-collages by well-known Johannesburg artist Sam Nhlengethwa, Glimpses of the Fifties and Sixties, while another respectable performance came from Peter Clarke, whose work Atlantic Sunset (1972), realised R295 880. George Pemba’s oil painting Mother and Child from 1980, sold for R273 120. In the more contemporary space, younger artists also sold well, like the aforementioned Ngobeni and Makamo, and also Benon Lutaaya, the much-mourned multimedia artist, whose work Extended Figure(2018) sold for R170 700, a world auction record. Comments Peffers, “It’s a source of pride to us to see work by important early black modernists like George Pemba and Gerard Sekoto take their place alongside exciting contemporary work by Sam Nhlengethwa, Blessing Ngobeni, Benon Lutaaya and others, and achieve prices that are more in line with what we think their value should be.” 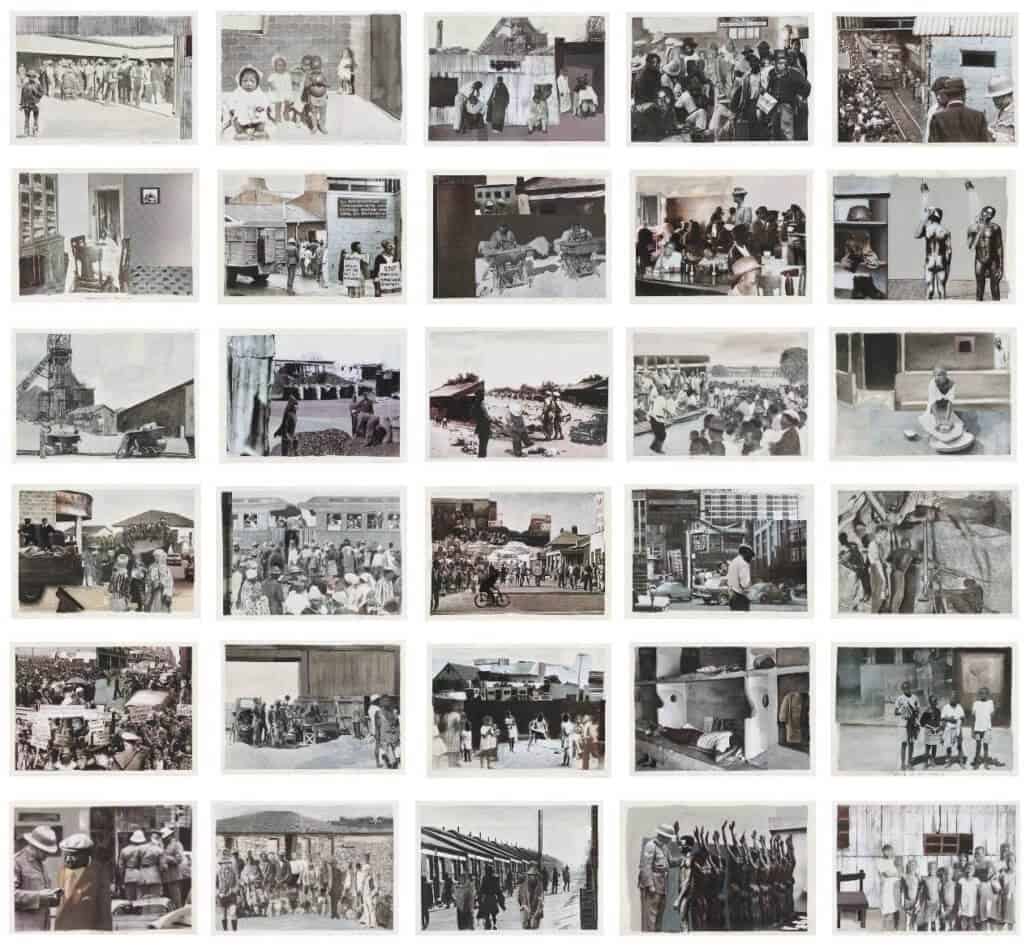 WORLD RECORD: Sam Nhlengethwa, Glimpses of the Fifties and Sixties, sold for R967 300

Aspire leads with photography at auction

A notable niche that is being developed and grown by Aspire in the local auction market is that of contemporary photography. South Africa has several world-class fine art photographers, and the sale featured a range of their best quality work, which sold spectacularly. The top photography lot by value was the impeccably-provenanced cover image of Pieter Hugo’s book The Hyena and other men, entitled Mallam Mantari Lamal with Mainasara, Abuja Nigeria 2005. The work sold for a South African record R512 100, beating Aspire’s own previous SA record.  The doyen of South African fine art photography, David Goldblatt, sold two significant works from his early series On the Mines. His Boiler House Supervisor, City Deep, Johannesburg. 1966 sold for R250 360, and his powerful image The last of the bigger rocks has just been dropped into a kibble. Now, with shovels, the team “lashes” (loads) the small stuff into the kibble. (1969) achieved R443 440, a world auction record for the artist for single image work. Elsewhere in a pioneering success for Aspire in this new segment in the local market, Mikhael Subotzky sold his work Members of the African Christian Church pray on a hillside above Yeoville and Hillbrow in Johannesburg (from the Ponte City series) (2005) for R250 360, almost three times over its high estimate. 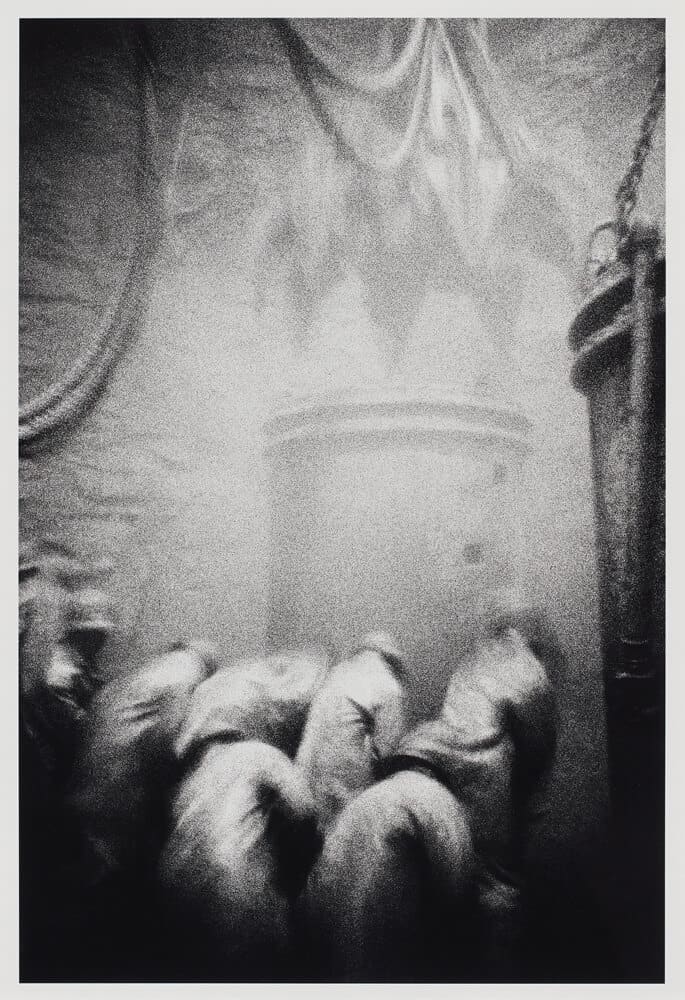 WORLD RECORD: David Goldblatt, The last of the bigger rocks has just been dropped into a kibble. Now, with shovels, the team “lashes” (loads) the small stuff into the kibble, sold for R425 600.

Ruarc Peffers, MD, Senior Art Specialist and auctioneer, concludes: “We are gratified to see our reputation as purveyors of the finest quality modern and contemporary art in the South African auction market grow. Our commitment to innovation and redress in the market has seen us branch out into the contemporary segment in this sale, notably with our very successful special section of photographs. We are also highly honoured to see success from our concentration on previously under-represented black artists at auction, many of whom also fall into the contemporary segment. As such, we will once again be paying royalties to those artists under the terms of our Artist’s Resale Rights (ARR) initiative. We’re gratified that our strategy of a focus on quality, and intelligent, informed collecting across our chosen segments, is beginning to pay dividends.”

For gratis and obligation-free valuations, and to consign works of art to our upcoming auction sales, please contact: