Awakenings: Impulses and Threads in the Art of Lionel Davis

in News Articles 2013
Share on facebook
Share on twitter
Share on email
Share on whatsapp
Lionel Davis is a significant figure in South African art circles. Core elements of his personal biography are well known, and his contribution as an artist is integral to accounts of seminal art organisations such as the Community Arts Project, Vakalisa and the Thupelo Workshop. By Mario Pissarra.
His early history as a District Six resident and political prisoner has made him an invaluable resource for post apartheid heritage projects, such as the District Six and Robben Island Museums. A charismatic, articulate and sociable personality, Davis is popular and respected, with an active public life and media presence.
Despite his prominent profile, Davis’s art has still to receive adequate attention from art historians, critics and curators. For while many of his works have been published and exhibited since the 1980s, you will be hard-pressed to find anything that can be described as a considered reflection on his art. The absence of a critical analysis of Davis’ art is due partly to his tendency to situate his practice as part of broader networks. His decision to pursue employment from ngos, mostly as an educator, rather than to work full-time as an artist also contributes to this dearth. Aged seventy-eight, and active since his late introduction to art making in 1977, Davis has held only two solo exhibitions, both comparatively recently. The task of surveying his art as a body of images produced over forty years remains to be done, along with a proper assessment of his contribution and value as an artist. This short essay, along with the online galleries published by Africa South Art Initiative (ASAI), aims to begin this process, one that will hopefully find fuller fruition with a retrospective exhibition that is in the early stages of being planned. 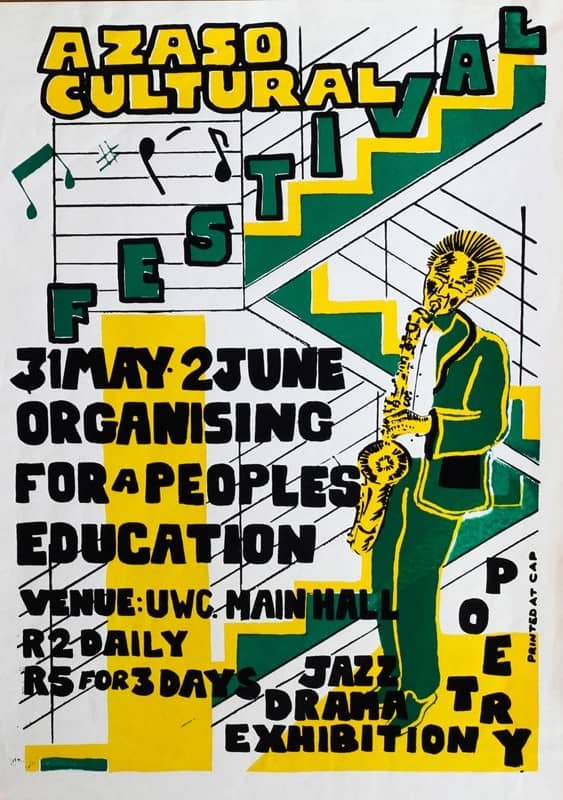 AZASO Cultural Festival Poster. Artist’s collection. Photo: S Williams.
In beginning to make sense of Davis’ career there are some obvious entry points. A quick glance suggests that his oeuvre reflects chapters of his life. There are narrative stories of District Six, images depicting imprisonment and the history of Robben Island, ‘political’ graphics and posters and social comment from his long association with the Community Arts Project (CAP), and abstract works from Thupelo. With his unique biography providing a thread to interpret his art, illustrating his personal narrative presents one obvious way to curate his work. Alternately, one could begin by sorting his output by media: graphics (silkscreens, mostly but not exclusively for posters, linocuts, woodcuts, and mono-prints, along with a fair number of etchings and a few lithographs), paintings (mostly acrylics, on paper, board and canvas, and some watercolours), drawings (pencil, charcoal, pastels, crayons), collages and mixed media works.
While biography and media present two frames to organise and present Davis’ art, it is more rewarding to go deeper, to search for the underlying concerns that motivate Davis as an artist and to explore ways in which these interests intersect with each other, sustain themselves or are more present at particular moments.
For instance, the very idea of distinguishing between themes and materials deserves comment. A common feature in Davis’ work is his healthy disregard for the sanctity of individual media. He has no qualms drawing or painting on a print, drawing on newspaper or the pages of a printed book, tearing and collaging drawings and prints, and incorporating words, from short phrases to whole paragraphs. What is privileged here is the creative act as an exploratory process, one in which intuition and play constantly are present. This approach, as many will know, is central to the original principles informing one of Davis’s artistic ‘homes’, the Thupelo workshop — lest we forget Thupelo is a Sotho word meaning ‘learning by doing’, incidentally also the original guiding principle for CAP. 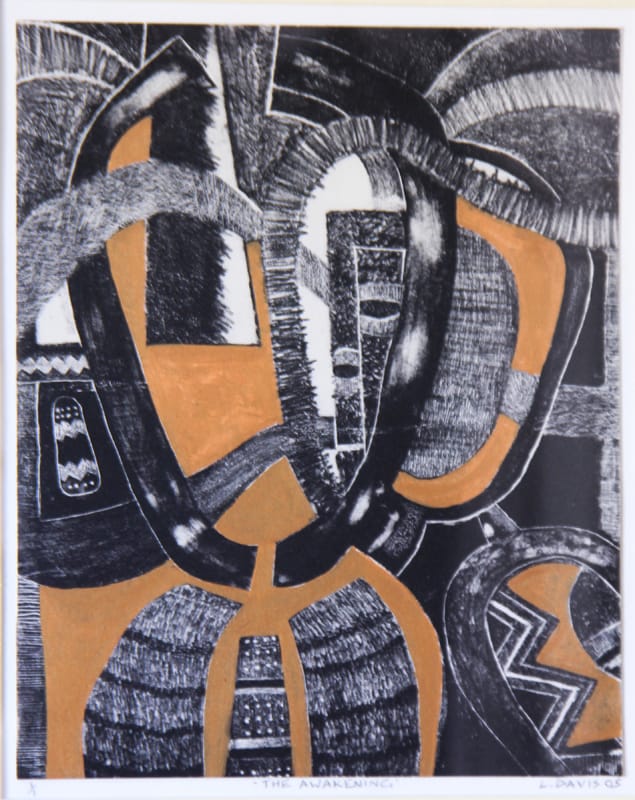 The Awakening, 1995. Lithograph, 27 x 33 cm. Artist’s collection. Photo: S Williams.
The idea of learning that operates here is only partially concerned with ‘technical’ questions; it is less about traditional ideas of skill than it is about growth. Titles, such as The Awakening (1995) and New Dawn (2011), suggest a link between the creative act and a quest for consciousness. As ideas, they resonate simultaneously at the personal and social levels. These works, along with most of Davis’ abstract pieces, are strongly evocative of organic forms, of movement, of generation…
The growth that Davis’ abstract forms conjures project into the future, affirming life as dynamic, but they also provide evidence of their nurturing and sustained investment. Many artists who choose to work in related fields, such as education, inevitably suffer a decline in productivity. In Davis’ case, drawing regularly has been important in maintaining a creative momentum. Informing the aesthetic qualities of his abstract works is a command of drawing; between the discipline of looking and the freedom offered by an emphasis on process, there is fertile ground for Davis’s command of line, form and colour to assume its own momentum and assert its distinctive character. What these works reveal is that the binaries between observational drawing and expressive, intuitive abstraction can dissolve, in the sense that these two tendencies feed off each other.
Drawing also informs Davis’ mono-chromatic linocuts, where the narrative impulse is strongly evident. In the case of those recalling District Six, there is an almost illustrative realism, presented as depictions of concurrent or sequential settings, and augmented by generous use of written texts. However, the dramatic juxtaposition of multiple settings and viewpoints introduces a fragmentary ‘whole’ that is as much a reminder of the incompleteness of memory as it is a visual simulation of rupture and displacement. 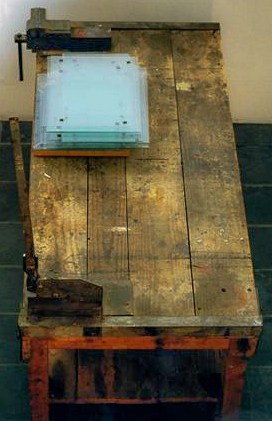 Untitled. Pencil, 21 x 29.7 cm. Artist’s collection. Photo: S Williams.
Through their reconstruction of a community displaced by apartheid, Davis’ District Six works resonate as implicitly ‘political’. More explicit political content features in pieces chronicling violent conflict between apartheid’s enforcers and its militant opposition, as well as Davis’ posters. But mostly, his politics are manifest through his empathy for people dealing with the challenges of being alive, being hungry, being depressed or just coping, passing time, waiting… This concern is most evident through his long-term interest in imaging train commuters. A life-long commuter himself, Davis has produced numerous works on this theme. Arguably the most powerful are not the composed and ‘finished’ paintings or prints but rather the sketches produced on-site where his discreet observation of individuals and groups is ably translated through modest means, typically pencil or pen on small formats. These are intimate, ostensibly unremarkable moments that affirm human presence and express a profound respect for the lives of ‘small’ people. They also chronicle an existential, liminal space between destinations, spaces fraught with uncertainties, sites of hope and fear, community and alienation. That these works date back to the mid-1980s, a time of serial states of Emergency, informs their often desolate tone, and underlines the displacement that the train journey replays with its shuffling between the city, off-limits to the majority, and the desolate locations to which many were forcibly relocated. It is a mark of Davis’ skill that deceptively simple drawings can summon the trauma of daily struggle that permeates everyday life for ‘ordinary’ people.
It is instructive to consider Davis’ approach to his train subjects with what was likely to have been one of his original sources of inspiration, the painting Third-Class Carriage (c. 1862-1864) by Honoré Daumier. The 19th century French realist and satirist conceived of this work as having a companion piece, The First Class Carriage (1864), in order to didactically highlight the gap between the elite and poor. Davis shows little interest in visualising a world of privilege that he is not part of, using his art to situate himself socially and politically. He is not looking in on an alien experience; he is visualising a world with which he is familiar.
The use of his art to situate himself socially and politically also informs a number of works that reveal Davis’ recurrent interest in his identity. Classified ‘coloured’, Davis has addressed the denial of African heritage that marks many communities that have embraced the notion of coloured identity. At times, Davis’ dissidence takes the form of claiming an African identity for his work, typically expressed through titles, a trend most visible in many of his abstract works. Elsewhere, he directly addresses the prejudice towards looking too black, as with his Big-Nosed People (2009) series. And when Davis incorporates rock painting motifs into his work, he troubles fixed notions of coloured and African identity, highlighting the absurd exclusion of the descendants of the first people from legal and common classifications of African identity. Similarly, his poster commemorating the history of Robben Island reminds us that it was three prominent ‘hunter-gatherers’ who were the first political prisoners banished there. 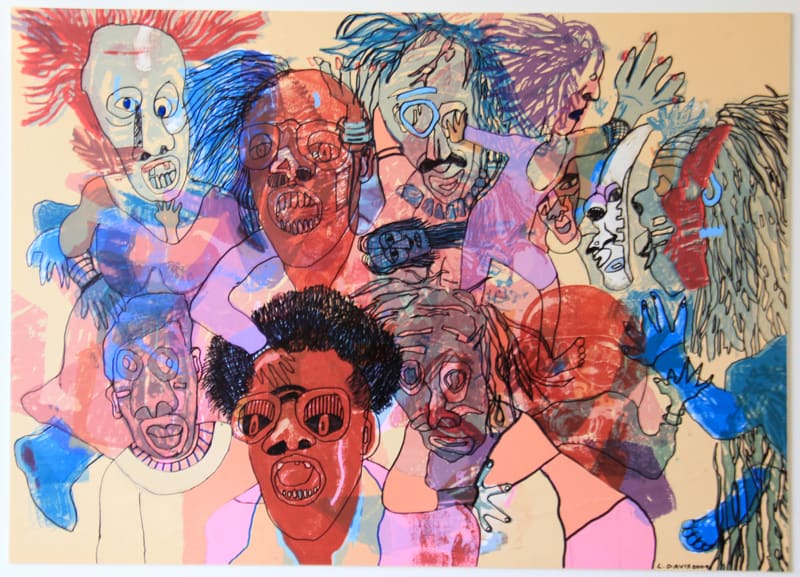 Masks #6. 69 x 49 cm. Artist’s collection. Photo: S Williams.
Davis’ unsettling of coloured and African identities as separate dominated his Maskerade exhibition at the AVA in 2008. In these works, Davis entangled the painted, minstrel face conventions of the Cape Town minstrel (klopse) carnival with those of West African masqueraders. Bringing these two traditions into conversation, Davis introduces questions of what constitutes masking in Africa. Additionally, he reclaims the presence of West Africans in the cosmopolitan mix of District Six, which conservative interests have ethnically cleansed as a ‘coloured’ heritage site. Once again, identity, culture, history and politics know no boundaries. 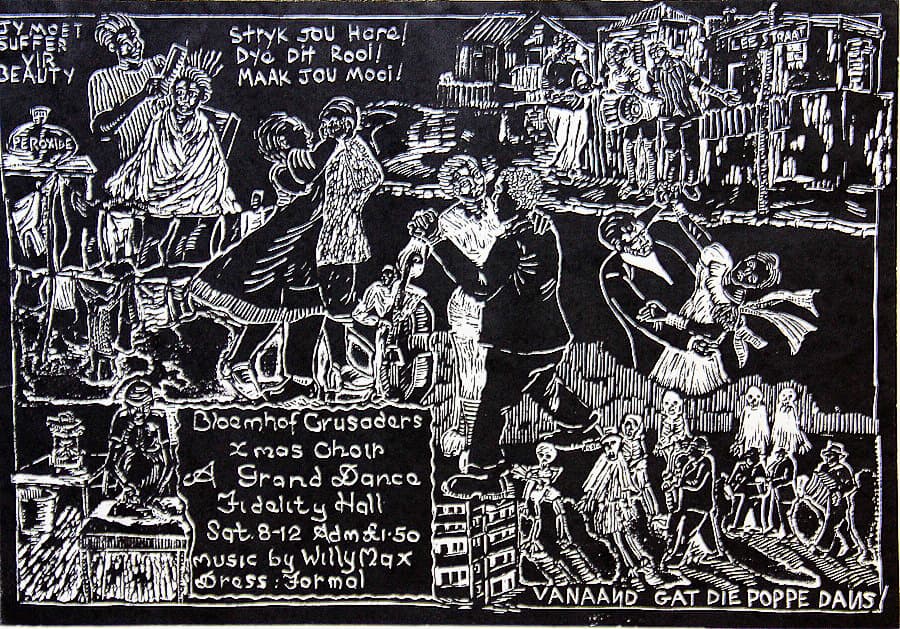 Vanaand Gat die Poppe Dans. Linocut, 27.5 x 39.5 cm. Artist’s collection. Photo: S Williams.
Viewing Davis’ work, one cannot but be struck by the convergence of skill, pleasure and introspection. Over the last forty years, he has produced a rich archive, free of any pressures to be anything other than meaningful for his own journey of self-discovery and socialisation. Through this committed approach to his practice, Davis affirms the potential of art as a means of making sense of the world and one’s place in it.
Mario Pissarra is the founder of Africa South Art Initiative (ASAI), a registered NPO that promotes and supports the development of a critical discourse on the visual arts in Africa. Contributing to the development of discourses rooted in (rather than imposed on) formerly colonised contexts, especially in Africa, ASAI research, resources and activism strive towards a more inclusive vision of international art and art history, informed from ‘below.’
Originally published by Africa South Art Initiative (ASAI), alongside extensive visual documentation: http://asai.co.za/artist/lionel-davis/