Banana Republic, The Economic Order of the Yellow-Bellied

The Lagos art community and culture consumers gathered to remind themselves of the state of affairs in the Nigerian polity. Through the ongoing satirical exhibition by Muyiwa Akinwolere and Agemo Francis happening at Untitled in Ikoyi Lagos and curated by A Whitespace Creative Agency 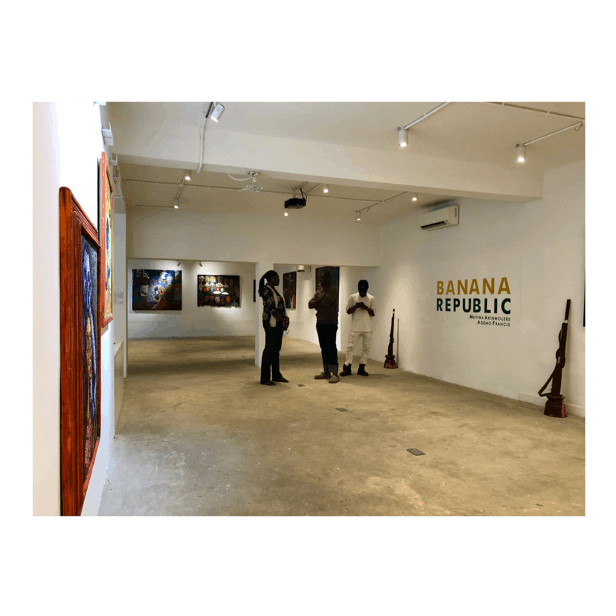 ‘Banana Republic’ is a fictional take on the stories and conditions peculiar to an ailing nation. Drawing from political, religious and socio-economic themes, Muyiwa and Francis engage their unique artistic inclinations to jolt the viewer to re-examine their country. Where the implications of a ruling elite class’ cack-handed management of the country’s affairs inevitably purges the masses out of nurturing hope for a better future.

Agemo’s style of grotesque caricature-like characters helps drive his message and makes it hit home faster. His grandfather was a diviner and he grew up around figurines, totems and masks typical to shrines. He went on to study Fine Art at the Delta State University where he majored in sculpture.

In two of his artworks on display titled Othangbe, I and II, the artist portrays a snake which is an object of worship and of much reverence in his culture. Othangbe means a snake with five marks. Usually, when people did bad things, this snake would show up and stir them to go to confess their wrongdoings. A type of check and balance to keep members of the society at bay. Francis tells us that the absence of potent old measures like this has made the citizens especially elected officials to act with abandon, when in a place of position. According to him, the gods of the new religions that the people now cling to are much more merciful and slower to action than the gods of old. 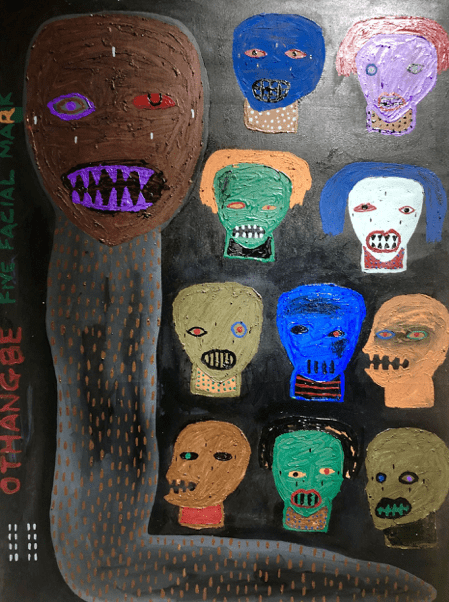 Agemo Francis, Othangbe I. All images courtesy of the artists & A Whitespace Creative Agency. 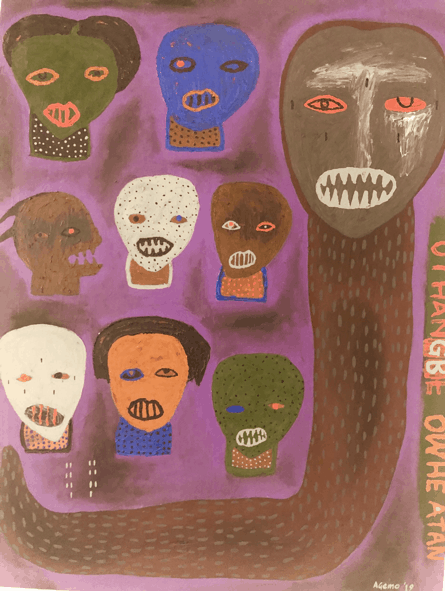 In another work titled Our head is their table legs, Francis in ironic scrutiny of events, shows a table of a feast, including all kinds of lavish meals with the beneficiaries having a good time. But at the expense of the heads of another class of people whose heads act as the legs of the table on which the sumptuous repast is taking place. 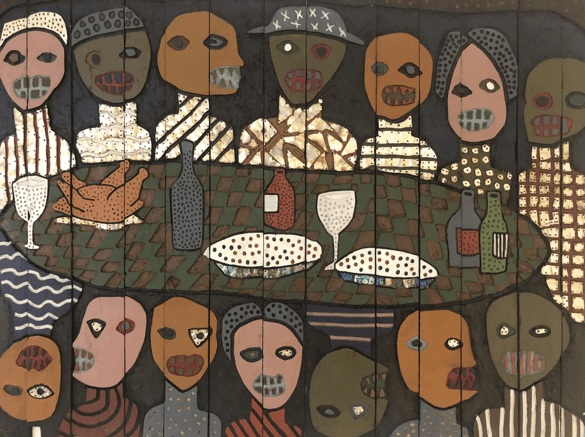 Agemo Francis, Our head is their table legs.

The mystic quality surrounding Francis works does not derail its beauty. His series features woodwork and canvas pieces, the artist constantly uses colours, patterns and even materials like metal to distinguish his subjects; what they are wearing, items they are holding, as well as the foreground and background.

Most of the woodworks are sawed and re-assembled pieces, and the artist uses a drilling technique to carve out his ideas on his canvas.

Muyiwa Akinwolere’s account of a Banana Republic is not short of fascinating, and captivating. The artist’s series of work is executed primarily using oil & acrylic on canvas, and with traces of grainy elements on the surface, to give the works a more surreal appeal and appearance. He also displays some wood sculptures, giving a 3D reality to the themes being discussed.

The new landlords, a depiction of cows grazing in the savannah is nothing short of social commentary on the prolonged conflicts of interest between nomadic cattle rearers from the North and plantation owners in the Southern part of Nigeria. 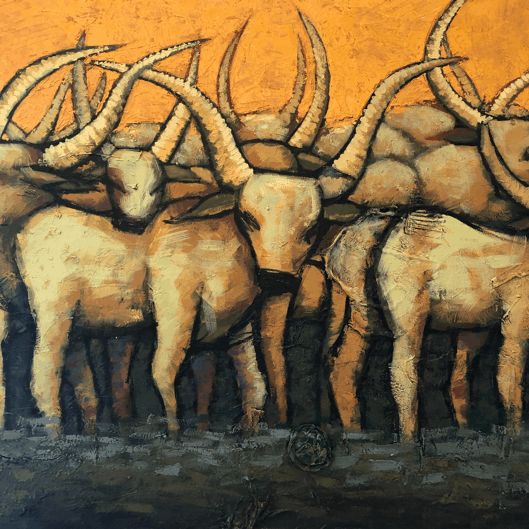 The exhibition’s “coat of arms” is also illustrated by Muyiwa. A pink canvas with an erect half-peeled yellow banana, surrounded at the base with a red banner. The banner has the words written; to chop and clean mouth. Speaking to the dominant ideology and motto of a Banana Republic. A case where the first person to take advantage of a resource or an opportunity, does so with the utmost discretion. 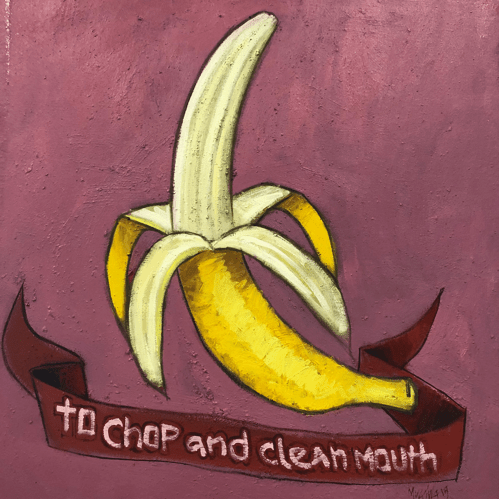 A prominent feature of the works are the eyes in the painting which look to be telling half the story of the characters they are embodying. The ruling class are fearful that they might not happen on the opportunities they get, so they chop and clean mouth. The masses are also too fearful to upturn the tables, lest they end up the most stricken in the process. 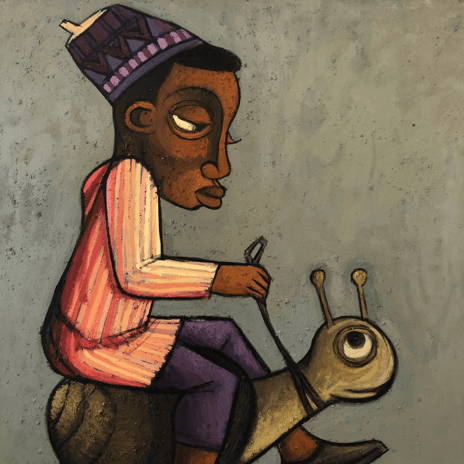 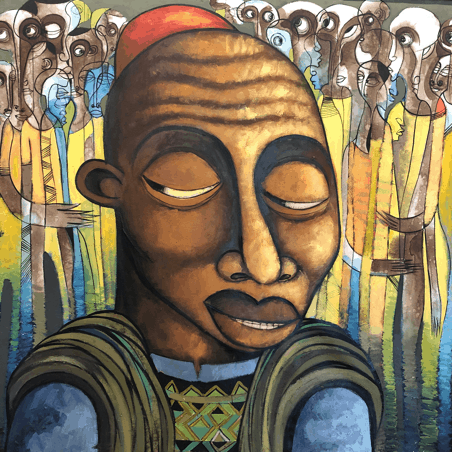 Muyiwa Akinwolere, A Man of the People.

‘Banana Republic’ is on display at Untitled in Ikoyi, Lagos (Nigeria) until the 12th of December 2019.