Kenyan artist Maral Bolouri wins the highest award at the L’Atelier for her interactive installation that sought to highlight how women in Africa are represented through oral traditions.

The Absa L’Atelier exhibition opened late last week with a ceremony to announce the winners of the annual competition.

L’Atelier is one of Africa’s most prestigious art competitions on the continent, which aims to rewards young visual artists with the opportunity to develop their talents abroad. The competition has expanded to include artists from nine other regions on the continent, apart from South Africa, such as Botswana, Zambia, Ghana, Kenya, Uganda, Tanzania, Mozambique, Mauritius or Seychelles are invited to enter. The result was a window into contemporary art practice around the continent.

This year. “Mothers and Others”, an installation by Kenyan artist Maral Bolouri, a previous L’Atelier Top 100 finalist, won the overall prize. The installation investigates representations of women in African orals traditions. It features handmade iron cowbells, that symbolise the objectification of women, hanging from a large stool. Attached to the cowbells are tags bearing negative proverbs and cultural truisms about women. 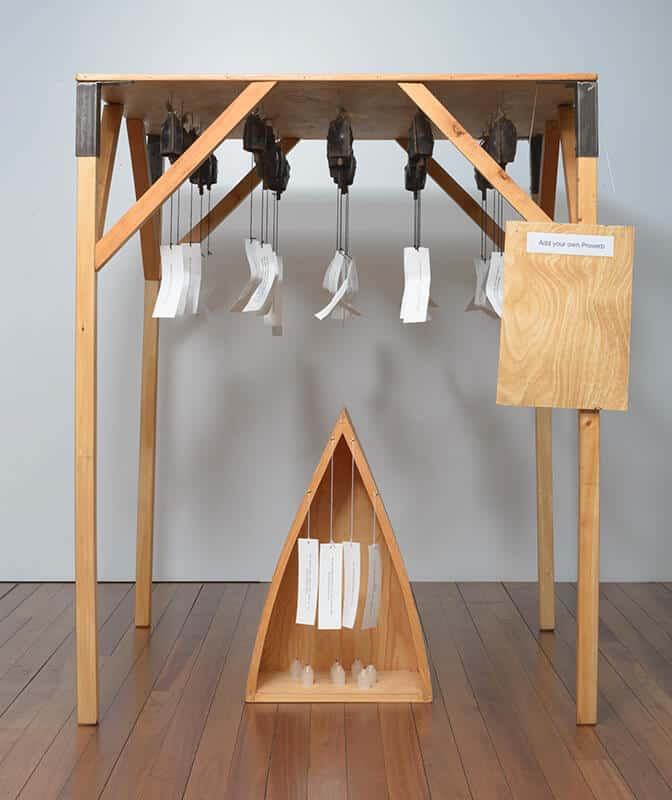 Underneath the stool, Maral has created a small altar which holds a few positive proverbs about women mostly espousing their role of child bearers and mothers. The final element of the installation is a blank board that invites audiences to write proverbs and truisms from their own oral traditions.

The prize will afford Maral a six-month residency at the Cite Internationale des arts in Paris, a large cash prize and a solo exhibition at the Absa Gallery. The win also places Maral among previous winners such as Diane Victor, Penny Siopis and Isaac Khanyile.

Ghanaian artist Pricilla Kennedy, who was awarded the first merit award, also created work that contemplated a woman’s role in contemporary society. The untitled work depicts the outline of a nude female figure in pink underwear embroidered directly onto a forest-green keffiyah, a traditional Middle Eastern square scarf, usually made of cotton. The choice of material was intended to subvert patriarchy as the scarf is read as a symbol of masculinity in the Islamic world.

The second merit award was given to Wilhelmina Nell for “No Evidence of a Struggle”, a bronze, wax paper and wood sculpture featuring the uneaten crust of a sandwich from a school lunch. The sculpture is a throwback to Nell’s schooldays and being taught that the crust was the most nutritious part of the sandwich, now the uneaten crust is a symbol for sloth and the pressure to behave well.

The third merit award was given to another woman, Manyatsa Monyamane for her photograph “Koko Meikie”. The winning photo was taken from a series of images that captured the timeless style and beauty of the 70s.

Khoza was awarded the sought-after price for “Note Making”. The title of the work suggests the notion of traditional pen and paper but the drawing was created on a tablet using a stylus. The drawings question representations of masculinity are South Africa and raises questions around heteronormative representations of masculinity in portraiture. Khoza’s win awards him a three-month residency at the Cite Internationale des arts and a travelling exhibition in South Africa upon return. Khoza has also been a Top 100 finalists in two previous L’Atelier competitions, in 2015 and 2016.

The Absa L’Atelier exhibition is at the Absa Gallery, corner Main and Polly Street, Johannesburg until October 27.