Basim Magdy is Deutsche Bank’s Artist of the Year 2016 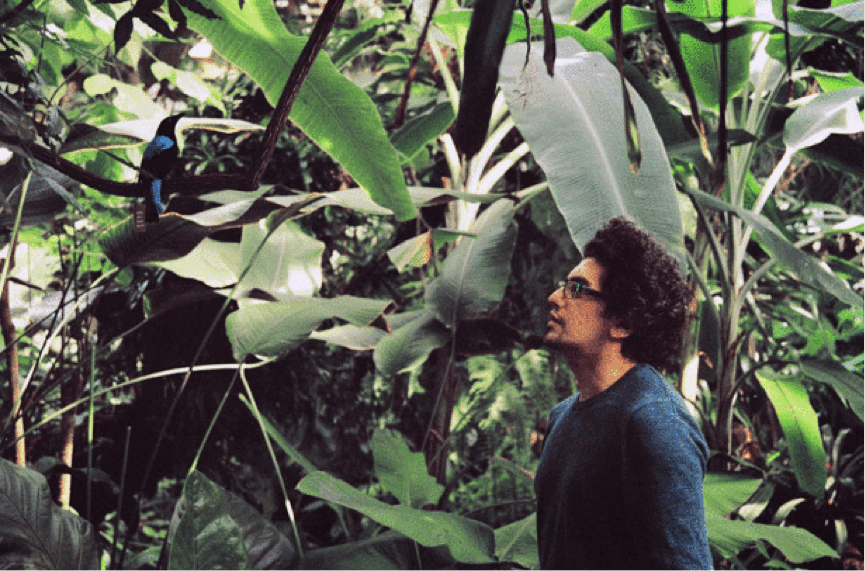 Basim Magdy, Motive 1. Photo: Deridre O’Leary. © Basim Magdy
The artist – who was born in 1977 in Assiut, Egypt, and now lives between Basel and Cairo – has created a multifaceted oeuvre in recent years encompassing film, photography, slide projections, installations, and works on paper. At the center of all of his works are structures of seeing, remembering, and archiving.

Many of Magdy’s works, which are based on observations of reality, are akin to surreal tales full of cryptic humor. With paintings and assemblies boasting psychedelic-looking colors, the artist investigates collective utopias and formulates his doubts in dogmas and ideologies. At the same time, he appeals to the viewer’s imagination and reveals alternative realities and social blueprints. “Maybe I’m more interested in issues that are not particularly pleasant,” he says about his artistic production, “but I have to say that my favourite reaction to the work I make is when people look at it and smile or laugh.” 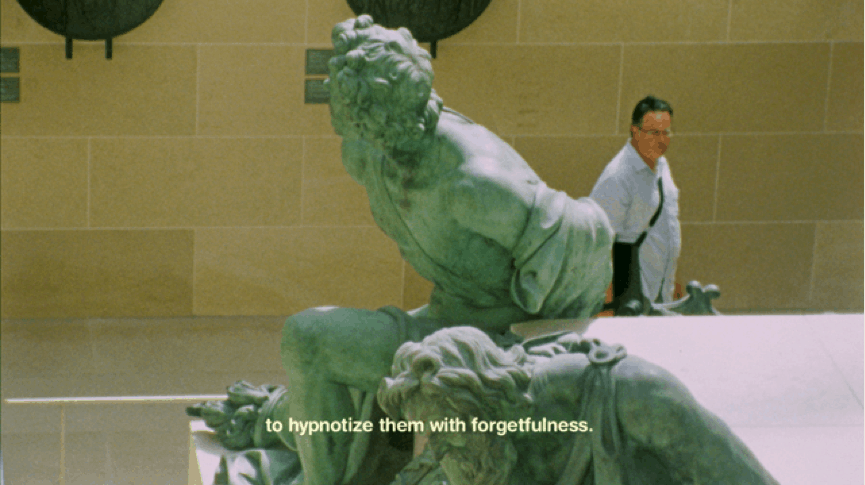 This essence is also found in one of his most well known works, the 2012 installation A 240 Second Analysis of Failure and Hopefulness (with Coke, Vinegar and other Tear Gas Remedies). The double projection, of 160 slides, shows the different stages of a large unidentified construction site in a city; the razing of the old building structures and the construction of the new building. But Magdy manipulated the slides of diggers, cranes, and construction work using unusual substances such as Coca-Cola or vinegar, soaking the slide film in them. The chemical reaction not only colours the material with nostalgically blurred hues of cyan, pink and green, the substances also serve as a remedy against tear gas—an allusion to the recurring cycles of collective aspiration, action and defeat that have been manifesting themselves throughout history.

Magdy also implements the artistic practice of what he calls “film pickling” in Super 8 and 16mm filmic works such as The Everyday Ritual of Solitude Hatching Monkeys (2014) and The Dent (2014), which is currently on view at the Triennial in the New Museum in New York. Like many of his works, The Dent revolves around the absurdity of life, people’s inability to learn from mistakes, the perpetual repetition of the same old thing. In this sense, past, present, and future are overlaid in Magdy’s work, with shifts in the different levels questioning the reality depicted. 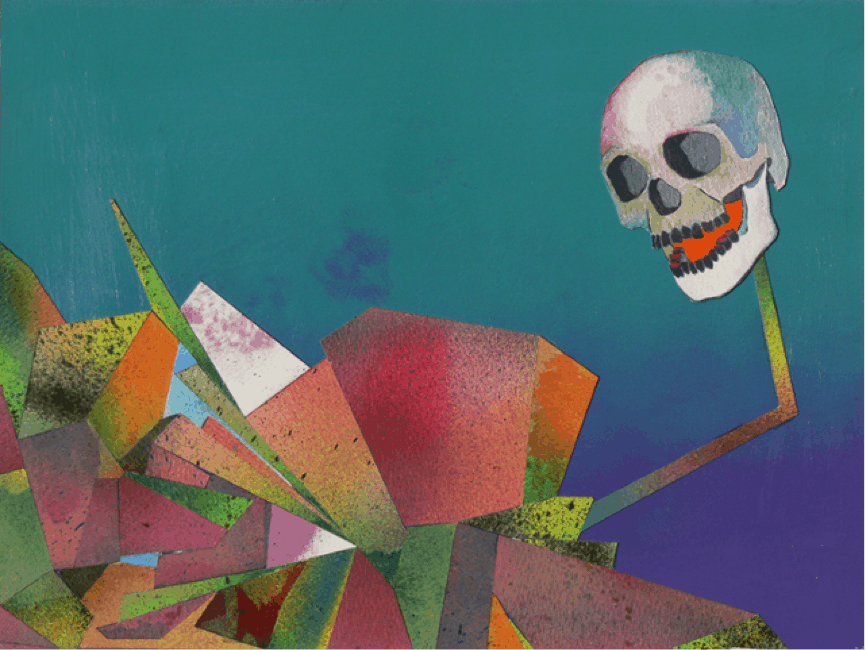 Basim Magdy, The Moment You Realize Eternity is a One-Way Track, 2010, spray paint, gouache and collage on paper.

This principle of layering occurs in his films as well as in his brightly colored works on paper and paintings. “I construct my frames when filming based on the same principles of constructing a painting,” says Magdy. “I balance the composition the same way. I guess my interest in layering also responds to the way I layer my works on paper with spray paint, collaged elements, gouache, acrylics, and watercolors. I see my films as compositions, constructed from layers and elements that mostly respond to one another in a suggestive way.” Like Magdy’s films, his works on paper seem strangely placeless and timeless, as though they want to dispense with conventional notions of time, space, and cultural identity.

Basim Magdy has participated in numerous international group exhibitions, including the Sharjah and Istanbul Biennials in 2013 and La Biennale de Montreal and MEDIACITY Seoul Biennial in 2014. Currently, he is prominently represented in the highly regarded show ‘Surround Audience: New Museum Triennial’ 2015 in New York and the exhibition ‘Lest The Two Seas Meet’ at the Museum of Modern Art in Warsaw.

Artist of the Year

After Wangechi Mutu (2010), Yto Barrada (2011), Roman Ondák (2012), Imran Qureshi (2013), Victor Man (2014), and Koki Tanaka (2015), Basim Magdy is now Deutsche Bank’s seventh ‟Artist of the Year.” The award is given on the recommendation of the Deutsche Bank Global Art Advisory Council, which consists of the renowned curators Okwui Enwezor, Hou Hanru, Udo Kittelmann, and Victoria Noorthoorn. The award goes to a contemporary artist who has created an artistically, as well as socially relevant, oeuvre, one integrating the media of paper and photography—the two main areas of focus of the Deutsche Bank Collection.