It is less than four months since we mourned the death of Sammy Olagbaju, less than two since Rasheed Gbadamosi passed away and now, we are confronted with the death of Ben Osaghae.  Rasheed, I knew him well, but Sammy and Ben were personal friends. In 2012, with the help of Sammy, I published a book: “Nigerian Contemporary Art in Lagos Private Collections”. Just a couple of years ago, Akinyemi Adetunji and I wrote “Ben Osaghae. Visual Chronicles of a society in flux”, a book monograph on Ben. 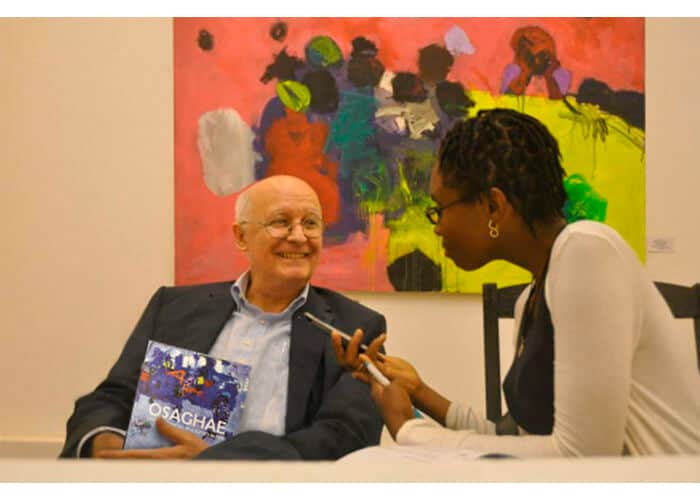 All images courtesy of Jess Castellote.
Osaghae was probably the most gifted draughtsman Nigeria has had in recent times, but, above all, he was a storyteller. He was the artist-seer and the artist-prophet of his society. Usually, there was a “narrative” in his works, but one that is not at all linear, unequivocal or direct. In his works, there is always an ambiguity of meaning that challenges the viewer to interpret metaphors and discover subtle references. He was not one to belabour his paintings with precise or accurate details in an attempt to get his message across; he merely suggested. Some could read his works as lazy, or even incomplete, but it is this quality that lends itself to multiple interpretations.Ben Osaghae was, without doubt, one of the most prominent figures of a generation of Nigerian artists born in the years around the country’s independence in 1960. For three intense decades, Osaghae chronicled the adventures and misadventures of his land and people; he, like few of his colleagues and contemporaries, remained attentive to social and cultural developments in his environment. For the abstract expressionists of the middle part of last century, there was the art work and the viewer. Mark Rothko refers to “the consummated experience between picture and onlooker. Nothing should stand between my painting and the viewer.” For Osaghae there was another element: social reality; and the painting was a medium between the onlooker and that reality. Through his works, he communicated; he commented on what was happening around him. He straddled the thin divide between the artist as a creator of self-referential objects and the artist as a communicator.

He was always on the lookout for societal or personal miseries and joys, with a full awareness of the limitations and weakness of human nature. Osaghae captured them sometimes with the cool detachment of a historian and other times with the fire of a social reformer. I remember well how, when showing me in his studio a painting on NEPA, he exclaimed in his usual forceful manner: “how can somebody continue painting landscapes when we do not have electricity for days?” Osaghae’s works are inextricably linked to the society in which they were produced. They are “political”, not because they propose specific, partisan, solutions to the organisation and government of society but because they always refer to the “polis”.

Sammy and Ben were a special collector and a special artist. Sammy, genuinely, cared about art and artists. He did not put together a wonderful collection as an investment or as vehicle to proclaim his status and feed his ego. Ben cared about art and he cared about his fellow citizens. Few Nigerian contemporary artists have been so independent from the dictates of the art market as he was. Trying to please the market was not a motivation for him. At times, he was a chronicler, telling us a story; at other times, he was a voyeur. His paintings were, most frequently, an instrument of social critique. He painted with a “photographic perspective.” He did not describe in detail; he merely suggested. There is great empathy in the way he looked at the people represented in his works. He documented their struggles, and offered a social commentary. In his animal series, for example, he satirizes corrupt politicians that use their positions for personal enrichment. His figures are always close to the viewer, like snapshots at close range. He gives great attention to expressions, feelings and dramatic gestures, drawing inspiration from the events of daily life. Frequently, his figures are in movement, and he repeatedly looks at children at play. 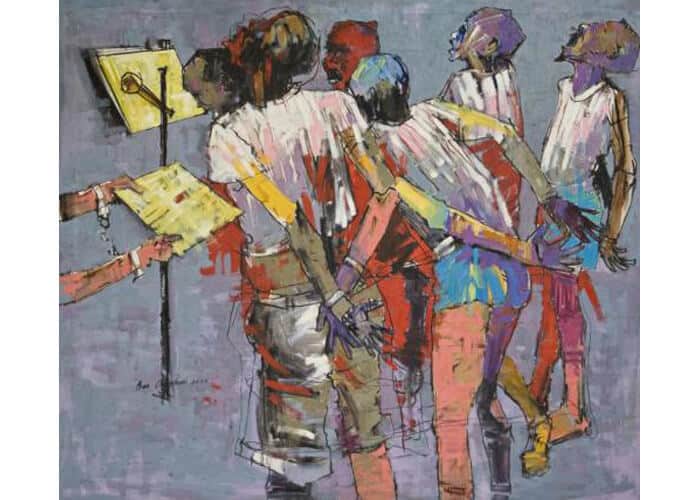 As he matured artistically -especially in his best period, 2000-2010-, his human figures became more and more emotionally charged. In trying to make meaning of the cluster of forms, lines and splashes of colours on the canvas, I was tempted to tilt the painting, flip it on its sides, rotate it or, at the least, cock the head and angle of vision. A recurrent preoccupation with the human condition pervades his works. For years, there were always groups in his paintings. Only later, does the solitary human figure appear.

In Ben Osaghae’s works, the “psychological distance” between the viewer and the scene is collapsed. The viewer finds himself immersed inside the scene. Osaghae told me many times how he painted from memory. He was able to do this because he was an excellent draughtsman with an uncanny gift for portraying the human figure even in the most contorted positions or from the most unusual angles. After his first, formative years, Ben never painted a landscape, a self-portrait. He did not paint out-doors. He preferred to work in his studio, to sketch some ideas from memory and develop them on the canvas. His works sometimes are humorous, playful and light-hearted, but they are never trivial. Osaghae’s passionate and intense personality does not leave much room for shallow artworks reduced to mere decoration. With every painting he wanted to say something. He wanted to compel the viewer to confront a situation and take a position. There was no room for neutrality. That is why a formal analysis of his paintings is never enough to understand and fully appreciate them. 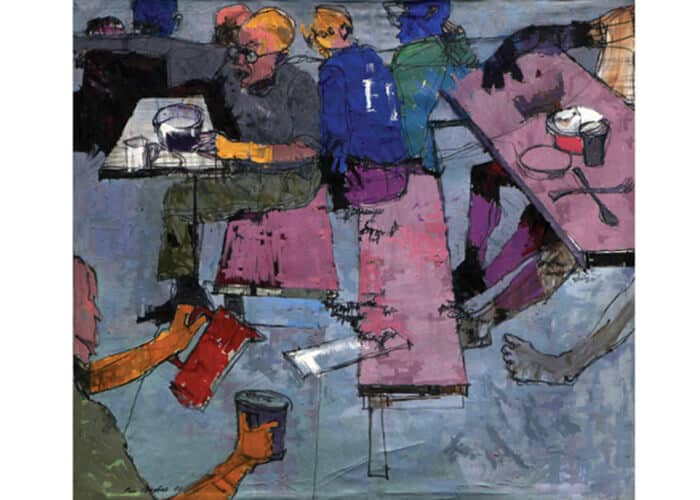 In his works there is no horror vacui ‒ the fear of emptiness ‒ that seems to grip many contemporary Nigerian artists of more “decorative” inclinations. He is not afraid to leave large areas of the canvas covered with a single background colour. For this reason his human figures frequently seem to be “floating” in an indeterminate context, detached from their surroundings. Colour plays a central part in all his works, but drawing is the anchor that keeps them in place. His lines become outline, sign, sketch, contour, text, graffiti or boundary. In his best works, the line remains clear underneath the ragged edges of the colour masses. Because of the flat backgrounds the characters of his paintings are brought to the foreground. He painted with sweeping brushstrokes and great gestural intensity. Undoubtedly, this way of painting helped him transmit the emotional intensity of the subjects.

Art historians will need some time to write about Osaghae’s legacy, his place in contemporary Nigerian art, his influence on other artists and his contribution to the Nigeria art discourse. But, undoubtedly, in his three decades of artistic production, he left a mark. No other Nigerian artist was able to portray so vividly the liveliness, complexity and vibrancy of Lagos life. Sometimes this was done just through a small “vignette” with one of two characters; other times it is a whole tableau of the city’s inhabitants. But it was always done with the confidence and self-assurance of a visual chronicler that happened to be an extraordinary draughtsman.
I visited him with a couple of friends just a few days before Christmas. Though, clearly, he was not perfectly well, he remained the cantankerous and argumentative person I have known since 2004, when I organized in LBS an exhibition titled “Without Borders” with four artists not so well-known as they are today: Ben Osaghae, Kainebi Osahenye, Rom Isichei and Wole Lagunju.
Nigeria has lost a good man and an excellent artist. We will miss him. I have lost a friend. I will miss him.

This feature was origionally published here.