in News Articles 2013
Share on facebook
Share on twitter
Share on email
Share on whatsapp
‘Black Dog’ is a series of still photographs by the South African artist, Oupa Lesime Sibeko. Each photograph contains a figure, usually in a standing position. Sibeko collaborated with the photographic artist Benjamin Skinner in creating this subject matter. Through using himself as the model, the artist has created himself as both the subject and the object. Sibeko acknowledges that this collaboration with Benjamin Skinner was significant and productive. Skinner’s photographic skills allowed Sibeko to tap into the variety of emotions as expressed through the lens of Skinner’s camera. It is evident from this series of photographic stills that the collaboration proved particularly successful. 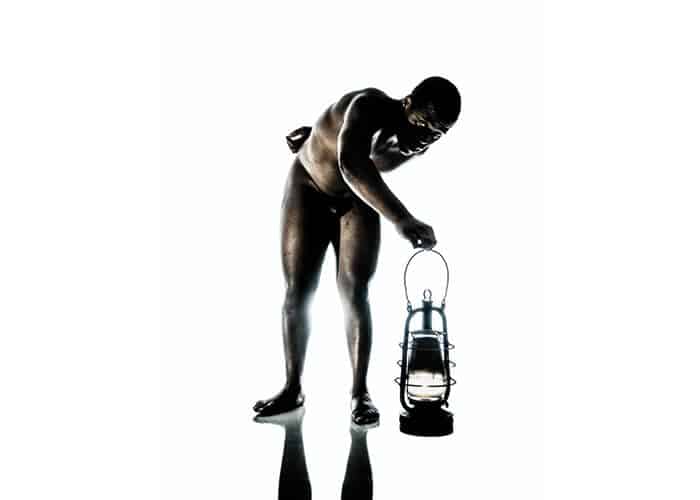 Oupa Sibeko, Untitled, from the series ‘Black Dog,’ 2016. Photograph: Benjamin Skinner. All images courtesy of the artist.
In all ten photographs, the figure is naked or in the nude. It is a masculine figure. This nakedness echoes vulnerability, but at the same time holds a powerful strength within the format. When articulating this series of images, Sibeko unpacks how during his formative years he hated men. To him, male role models were in short supply. His childhood development was shared with his grandmother and uncle. This particular uncle was an alcoholic and thus constantly in a state of drunkenness. Sibeko states that it was “a brutal, violent and sad home.” These feelings are reiterated through the vulnerability of the naked body. One must ask where this violence exhibited by Sibeko’s uncle arises from. Was it present in the behaviour of his grandfather or is it perhaps the emotional effects of the “anti-colonial” process that we as Africans continue to unpack? Furthermore, the body is articulated by a bright, harsh, white light that almost silhouettes the body and casts a strong shadow in the foreground.
The first image of the series depicts a figure wearing a chain around his neck. The end of the chain is coiled to the side of the figure. This chain is symbolic of the slave trade that had (and still has) a devastating effect on the human psyche. The image reminds me of an installation called Marine Archaeology by the Senegalese artist, El Hadji Sy, which was exhibited at Brazil’s Sao Paulo Biennale in 2014 and formed part of his retrospective at the Weltkulturen Museum in Frankfurtam-Main in 2015. In this installation, Sy utilizes found materials and objects such as coffee bags from Brazilian plantations and maritime ropes. These objects relate to the personal histories of many Africans that were forced to migrate across the Atlantic Ocean to South America. Of the Africans that left the continent, approximately only half of them arrived on Brazilian soil. El Hadji Sy honours and memorialises these fallen brothers and sisters by creating silhouette outlines with rope against a pale blue material. These silhouettes symbolise the marine bodies that lie on the Atlantic’s ocean-bed. 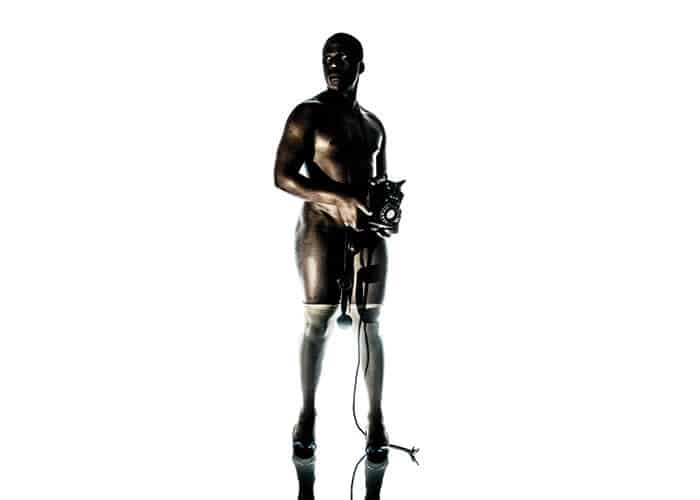 Oupa Sibeko, Untitled, from the series ‘Black Dog,’ 2016. Photograph: Benjamin Skinner.
It is not just the nations of West Africa that underwent scarring through the process of African colonisation. In Namibia (Southern Africa), a revolt was launched against the colonists in the late 1890s when Namibia was named German South West Africa. The local Herero people were forced to sell large areas of land for a minimal amount of money. When the droughts began and the Herero Namibians had no land to live off and little use for their minimal currency they revolted against the Germans. The Herero people made initial successes but in 1904 an expeditionary force under General von Trotha proclaimed for annihilation. As William Kentridge points out, between the years 1904 to 1907, “eighty percent of the Herero population was killed. Either killed in battle, or driven into the desert to die of hunger and thirst.” This is current history, this is not old history, he elaborates, “The Herero genocide is part of a continuing set of questions and actions, questions of seeing, understanding, and the use of violence.”
Therefore when the viewer witnesses the image of Oupa Lesime Sibeko with a chain around his neck, dangling to the floor in a coil, the collective viewer is thrown back into the visualisation of a community of Africans deceived by foreign currency and subsequently killed. It is these emotional episodes of past trauma articulated in the present that the viewer may confront when looking and seeing Sibeko’s work. 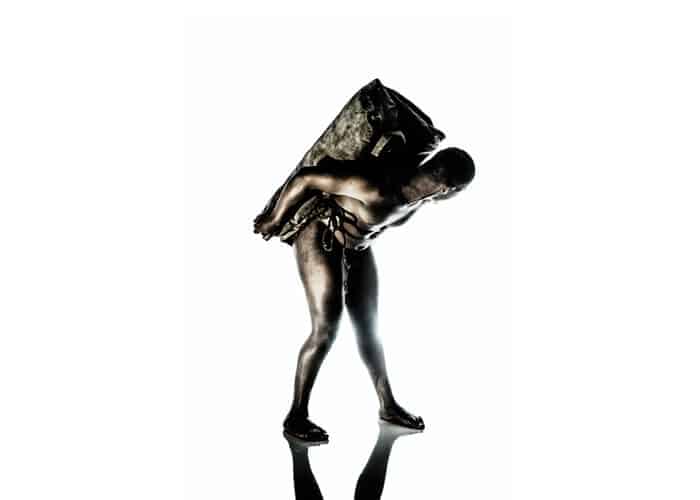 Oupa Sibeko, Untitled, from the series ‘Black Dog,’ 2016. Photograph: Benjamin Skinner.
In two further images in this series, the figure is articulated peering through a white metal scale measuring a person’s mass with feet on either side of this piece of equipment. His eyes are carefully cropped, gazing directly at the viewer between strips of metal. The shoes are placed behind the scale. In the figure’s arms is a brown bottle indicative of medicine and an unidentifiable object. The second image utilises this object, the prototype measuring scale depicts the figure in a side-profile, lifting the scale off the floor, taking ownership of the prototype. The viewer can now identify the shoes to be that of high-heels. Furthermore the figure wears white stockings rolled up to just above the knee.
This object or prototype holds a very weighted history concerned with ethnographic studies and classification. During the colonial period in Africa, many humans were objectified under the guise of ‘study,’ often carried out in attempts to ascertain differences between race in humans. It was a strategy utilised by colonial powers to manipulate power and control over its subjects. These studies have now become redundant and irrelevant in the 21st Century, especially owing to the validation of how previously colonised people contributed and radically evolved the cultures of the colonisers. By Sibeko taking hold of this prototype object he is claiming ownership of it. The figure’s stance, his feet on either side of the scale, asserts an authority over the prototype object, with his gaze holding the viewer in check. 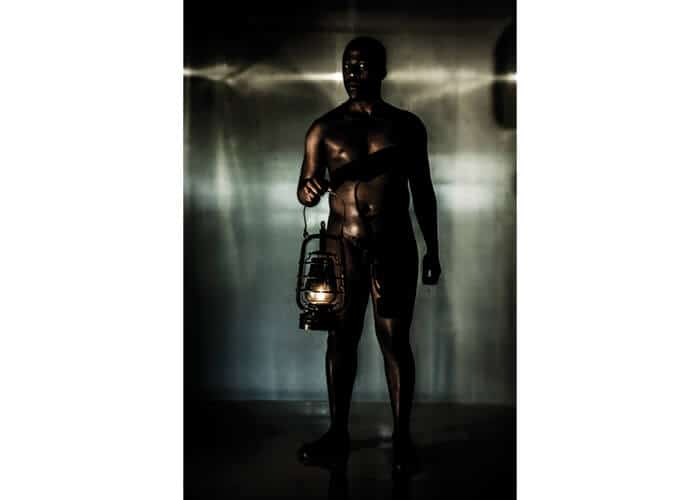 Oupa Sibeko, Untitled, from the series ‘Black Dog,’ 2016. Photograph: Benjamin Skinner.
Taking ownership over past histories was debated during think-tank discussions at the Weltkulturen Museum in 2014, as a prelude to the exhibition ‘Foreign Exchange (or stories you wouldn’t tell a stranger)’. Ciraj Rassool elaborated on his research into the South African Museum in Cape Town where dead bodies were classified and inventorised for the purposes of racial research. “What is interesting is what happens when such a system becomes destabilised,” he emphasised. Here the system may refer to the museological practice. It is critical to position this historical rendering within the context of Sibeko’s photographs as it creates awareness to the past notions of collecting and curating that is being grappled with and transformed.
Further to this insight is a quote pertaining to this critique by the artist, Luke Willis Thompson: “There are conditions that force our classification system to demonstrate itself, to make itself visible, and these conditions often create rupture or transformations. I’m sure we can find conditions that force objects, images and their systems of classification to change.” In the same vein, Sibeko’s images create ruptures and transformations. I argue wholeheartedly that as a viewer they “force objects” – a measurement scale is transformed, questioning this system of classification in the notion of science and rationality. I agree with Ciraj Rassool’s claim that “these issues matter like life and death because they are about how we understand the world and how we make new futures.” New futures and new visions invite new knowledge production in an era of expanding visual bombardment. 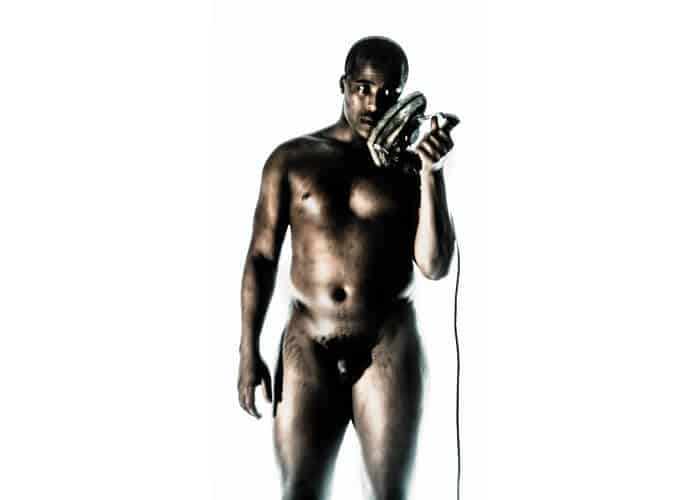 Oupa Sibeko, Untitled, from the series ‘Black Dog,’ 2016. Photograph: Benjamin Skinner.
A further two photographs in this series depict the figure holding a lantern in his right hand. The first image in this sequence includes a steely grey background, evocative of a mine shaft elevator that would typically move miners below and above ground. Again the figure is unclothed, suggesting a lurking vulnerability. The lantern is a linkage to the sordid history of mining and migrant labour in Southern Africa and a modernised vanitas object, like a burning candle. This lantern can therefore be viewed as a symbol of mortality, and how appropriate in the context of thousands of miners who have lost their lives or have become terminally ill due to the harsh working conditions that confront them. Margaret BourkeWhite was the first female photographer to contribute to LIFE Magazine. She was sent on assignment to South Africa in the 1930s and literally lugged her photographic equipment down the mine shafts in order to document the harsh environment that miners were exposed to. In viewing these images, echoes of the voices of lost miners resonate through these two haunting images.
The penultimate image in this sequence depicts Sibeko’s figure in a blurred construct with an iron held up to his cheek. In a common scenario this iron would be used to smooth creases out of clothes, be they shirts, trousers, skirts or dresses. By holding this object to his cheek, this image immediately conveys a feeling of self-inflicted pain. Furthermore we do not know whether the iron is connected to an electrical output. The image conjures up Randolph Hartzenberg’s mixed-media artwork, Domestic Baggage (1993 – 1994). This powerful painting shows a disconnected plug hanging in mid-air above a suitcase. To Hartzenberg, the disconnected plug is evocative of disconnected communities. One can argue that the iron set against the side of Sibeko’s face, whether connected or disconnected, symbolises detached communities that were economically manipulated off certain tracts of land, as was the case of the Herero people. It can be construed as a foreign object, not originally from Namibia.
The final image of Sibeko’s sequence depicts the artist with a massive rucksack on his back, filled with a material unknown to the viewer. It may be filled with gold, platinum, coal or wood? It alludes to the work of mining carried out by many South Africans since the discovery of diamonds in 1867 in the Northern Cape, and gold in 1886 in what was previously the Transvaal and is now the Gauteng province of South Africa that is named Johannesburg or ‘eGoli,’ the ‘City of Gold’. In this image the figure’s face is turned away from the viewer, suggesting in this scenario of non-identification that he could be representative of the millions of Africans who have mined and worked the lands of Southern Africa, often at the expense of their health.
Daniel Hewson is a curator, writer and artist from Cape Town, South Africa. He graduated from Rhodes University in 2011 and is currently studying towards a Masters in Art History through the University of the Witwatersrand.
This article was initially published in the September 2016 edition of ART AFRICA magazine, entitled ‘BEYOND FAIR.’