Joe Dog was walking down Long Street, Cape Town, towards Clarke’s Bookshop a month or so ago, when he became aware of an intense presence – an old man with a large camera, his gimlet eyes scanning the crowded street.

It was David Goldblatt.

“Ah,” said the photographer, catching the cartoonist in the beam of his gaze. “Anton Kannemeyer. Bitterkomix, right?” After a cursory exchange of greetings, he launched into a tirade. “You are not making good work anymore,” he said. “Your work should be cutting edge. It should freak people out!”

I heard this story in Anton Kannemeyer’s comfortable family home in Pinelands, with Trompie, their three month-old beagle, tugging at my trouser leg and their friendly domestic worker dusting the crockery in the dining room adjoining his book-lined studio where a dehumidifier rectified the wet winter air.

I had gone there to fetch a review copy of the new issue of Bitterkomix, the first since 2008, and Anton opened our conversation with an apologia on the belated magazine that, a decade ago, defined South African comic and satirical art. It was the day before Madiba’s 95th birthday, and as I paged through Bitterkomix 16, four years behind schedule and a skeletal shadow of the orgasmic 15th issue, I got a strong sense of the end of an era. The magazine opens with a typically ironic Kannemeyer line: “I’ve spent so much time with family that I’ve started to lose sight of what really matters!” and ends with an exhausted Konradski bent over his drawing board and complaining: “Fok. Om comics te teken… vat fokkin’ forever!” 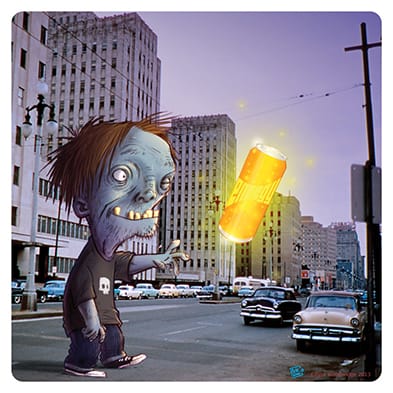 Bitterkomix is still wickedly funny, crude and edgy, and will certainly freak some people out, but as an iconic embodiment of the spirit, look and feel of South African comics, it’s history. Whether another comic art publication will ever be able to embody the zeitgeist of a particular historical moment, as Bitterkomix did, seems doubtful. The South African comic art scene is popping all over the place with a bewildering array of comics initiatives, online projects, new publications, exhibitions, comic jams and drawing groups, spectacular street art and graffiti, and successful animation projects, with a number of associated teaching institutions and some very busy firms pumping out artwork and animation for international clients, plus a larger, more diverse group of political cartoonists than we’ve ever had. It’s as busy as Hell, but it’s all pockets, silos and cells – linked, of course, by a dense online network – very difficult to characterize or define. Even talking about “South African comics” as if it were a single entity, seems hardly plausible these days.

The idea of a “national” comics scene may already be so passé that it’s hardly worth talking about. Is it even realistic to talk about “South African comics”? Anton Kannemeyer doesn’t think so. Nor does Daniël Hugo, a brilliant reclusive artist whose 120-page collection of enigmatic Cape Town-based sci-fi stories is due for publication in September. And although I haven’t asked her, I’ll bet that Lauren Beukes, who has just celebrated the publication of a trade paperback collection of her stories for DC Vertigo’s Fairest series, doesn’t think so either. At the time of writing she was in the UK, on a whistle-stop tour to promote her new book, The Shining Girls, but I got the definite impression from her impeccably curated online presence that Lauren’s gone global. Who else to ask? I decided to give Mogorosi Motshumi a call. Based in the Bloemfontein township of Batho, where he’s been holed up for the last four or five years working on his as yet unpublished multi-volume graphic autobiography, 360 Degrees, Mogorosi is a quintessential South African comic artist, if ever there was one. But even he couldn’t imagine what might be meant by the phrase “South African comics”. As a last resort, I consulted Google. But my search “SA comics: WTF?” yielded precious little. Online, “South African comics” is a virtually non-existent category. Despite several well-meant attempts over the years to organise the local comics scene, we continue to exist individually but not collectively.