Last Saturday (9th April) Ana Teresa Fernandez, members of Border Arte and various community members took to painting out the Mexico/US border along Agua Prieta, Juarez, and Mexicali. This intervention forms the third ‘Borrado La Frontera’ intervention since 2011, a reaction to the physical and emotional divisions created by the border. 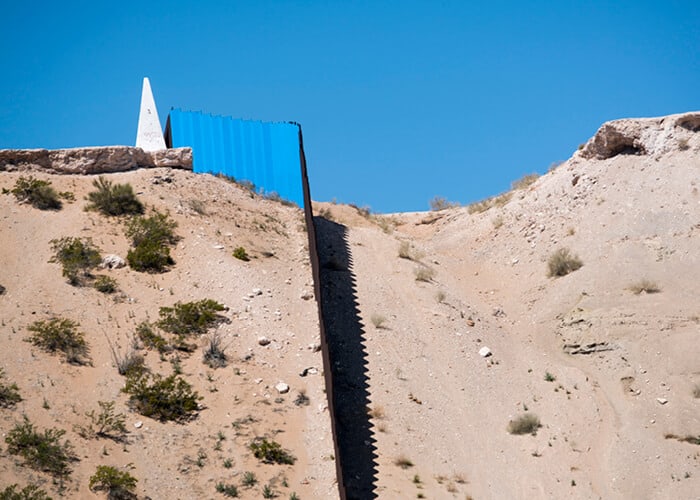 The border at Juarez, painted during the ‘Borrado La Frontera’ project in Juarez. Photo: Nick Oza

Please tell us about your involvement with Border/Arte and how you came to collaborate on the ‘Borrando la Frontera’ project?

I first collaborated with Mary Stephens, founder and director of Border/Arte, when she invited me to do a state wide residency project in Arizona through Arizona State University. I worked with her doing lectures and workshops about art, politics and social change in five different cities at high schools, universities, women non-profits, museums and other collective spaces. Working with her was incredible! She seemed to bring out the best in people no matter what type of exchange it was. Each time we did a workshop or lecture it felt we had started a fire of conversation and discussion. I proposed creating the second iteration of ‘Borrando la Frontera’ at the border of Nogales to end the residency. Mary is such a dynamic and visionary leader that she got a huge community to unite and come from all Arizona to work on it. The public’s response was so strong and epic, both in favour and against it… the politics in Arizona are extreme. It was months after, when we were debriefing, that we decided to keep this dialogue going and continue to work and ideate together. This led to the third iteration of Borrando la Frontera that Border/Arte hosted and made a virtual platform accessible to host a live stream of us creating Borrando in Agua Prieta, Sonora, Mexicali, Baja California and Juarez, Chihuahua. 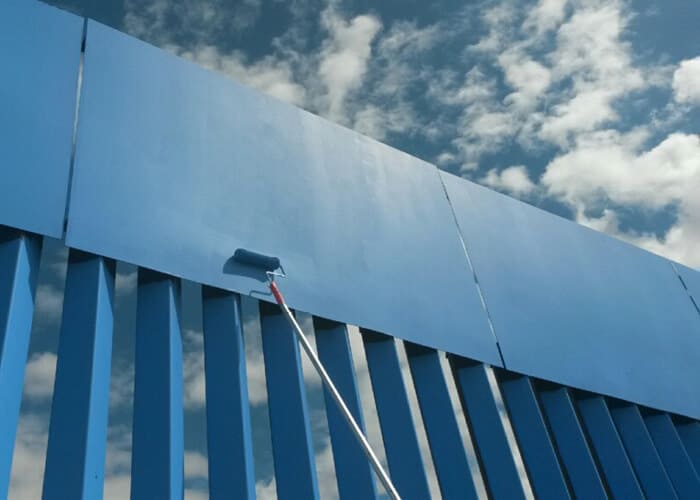 Some final touches are painted onto the border wall in Mexicali. Photo: Brooke Binkowski

Your recent project ‘Borrando la Frontera’ is a continuation of a project that you began in 2012. What inspired the project and how has it evolved over time?

The first Borrando la Frontera was created in 2011. That was as a result from all the stories that I kept hearing while living and working in San Francisco. You hear about families torn apart, women and children walking for days on end across the desert, people swimming for miles, all trying to cross to the other side to attain a better life. This wall was the object of frustration and hate, where physical separation and emotional division starts. I wanted to tear a piece down. Couldn’t people see all the hurt and sadness it was causing? Families being divided through deportation, after they had been there for over thirty years.

I painted the sky over a section of it, to remind people of what that space could look like, if this ugly fence didn’t exist. I started the project as a performance piece where I erased it by myself over the course of five hours in a dress and stilettos. To wear black in Mexico is called “lutto,” where a person mourns over death for a year. I wore black as an homage for those that had passed away.

Later in October 2015, I did the second one in Nogales. This time it was no longer a performance, but a public community intervention. I got people from all over Arizona to join me in this protest.

The third time, April 9th 2016, Mary Stephens and I worked together to do more of a guerilla warfare approach, where we penetrate the wall at three locations at once. It was live streamed from Agua Prieta, Mexicali and Juarez. Each location had activists, artists, and individuals that already work on issues pertaining to the border and speak for social justice. My mother, Maria Teresa Fernandez has been involved in all the projects. This time she lead the one in Mexicali, alongside my father, Genaro Fernandez. 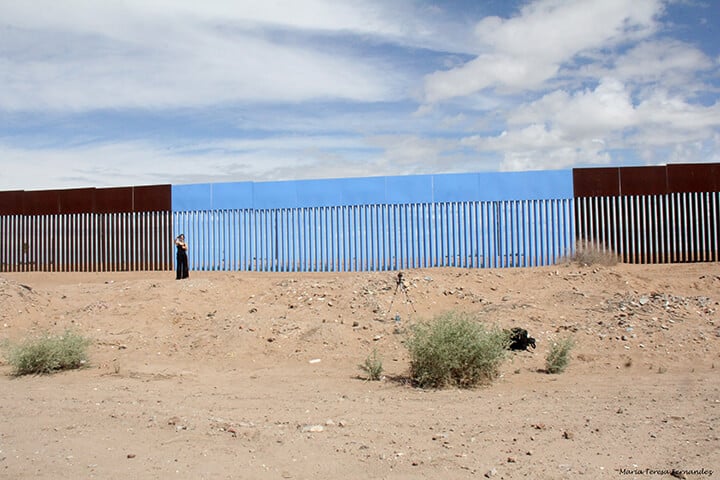 A section of the painted border in Mexicali. Photo: Maria Teresa Fernandez

On Saturday (9 April 2016) the painting process was streamed live for audiences as far reaching as Berlin and Vienna, and included a panel discussion. In doing so, what did you hope to achieve and what were some of the outcomes from these discussions?

It was live streamed so that people could see the process, witness the action in its entirety. There is no mystery. It is a simple, peaceful and poetic action that only requires individuals. We were hoping to amplify the dialogue about empathy and direct the conversation about immigration, imagining an alternate reality; one which speaks against building more walls to divide us, but instead opens us up to talking about our differences and ways of accepting each other.

Interventions such as ‘Borrando la Frontera’ are done in partnership with local communities and organisations. The same can be said for all the other projects. How important is this process of engagement to you?

The process of engagement is imperative. Instigating agency of change from within, for the people of the community and by the people of the community is the most valuable element. I like interacting and listening to the communities I work with; hearing their pleas, their joys, their frustrations. I did Borrando in Juarez and Agua Prieta because people from those locations either reached out or spoke to me about wanting to participate in such a way with the border. So I engaged those cities and those folks. I had gotten a message from photo-journalist Pablo Hernandez inviting me to Juarez to do Borrando la Frontera. We had a really interesting exchange and he was so valuable in choosing a location that best fit the project. I was able to include Rayito Rocha and Maclovio Ferro, two public artists that do work about the disappearance of women in Juarez. In Agua Prieta the local artist Jenea Sanchez and her husband Robert Uribe (local conceptual and public artists that run a binational art walk between Douglas and Agua Prieta) lead the one in Agua Prieta. In Mexicali I involved Daniel Waltman, who created the first Binational Park between Tijuana and San Diego, and Brooke Binkowski ,writer and reporter from the San Diego Area. And my mother Maria Teresa Fernandez, photo-documentarist of the border. These are all people that care and touch the border and its issues in a variety of ways. 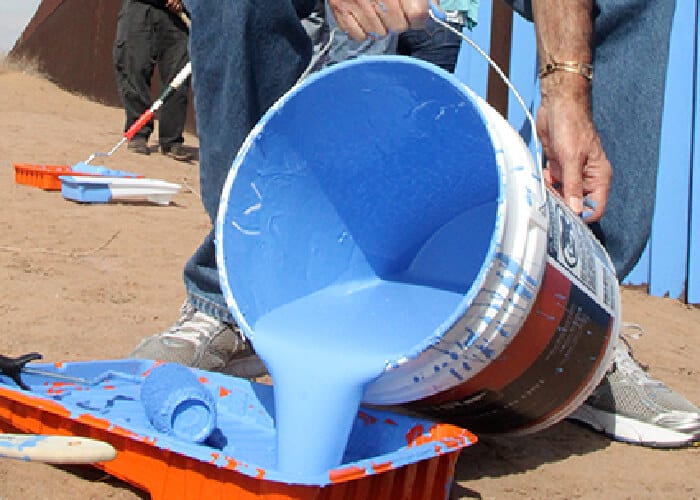 Detail of a photograph by Maria Teresa Fernandez in which a participant prepares a paint tray.

There is a certain degree of communal responsibility when one steps into the public space. Has there ever been unexpected resistance from communities?

At times when you initially start the conversation, that is when I have encountered a bit of mistrust and scepticism. However if you show up, again and again, and don’t stop showing up, you demonstrate that you care, that you’re willing to be a part of their battle to create change, and people will support and welcome you. There are times when you are met with extremists that just don’t want you (or what you stand for) there. I still show up when I have been threatened.

How have these projects affected your growth, not only as an individual, but as an organisation?

All my projects have greatly affected my growth personally as well as professionally. I’ve learned to listen and trust other people more over the years. I’ve learned to trust my intuition no matter how much it scares me. I was so nervous on April 8th, thinking there might be some border patrol issue at any of those three locations, or some technical malfunction, or you doubt that people might not even care, and why are you pouring all this time and energy on something that seems so uncertain… When you feel that much fear, that is when you know that there is something to risk and you are pushing your own comfort boundaries. When you work with other artists and communities you learn so much from each of them that your perspective and language broadens, which is the biggest gift any type of labour can provide.