in News Articles 2013
Share on facebook
Share on twitter
Share on email
Share on whatsapp
Presented by the Pratt Institute’s B.F.A. Photography programme, The Pratt Photography Lectures feature diverse photographers, critics and curators that speak about their work.
In Brooklyn, New York City, ‘visual activist’ Zanele Muholi was the selected speaker for the series. Muholi studied at the Market Photo Workshop in Newtown, Johannesburg, and completed an MFA at Toronto-based Ryerson University. At Pratt Institute, the artist discussed diverse photographic projects including Faces and Phases (2006-ongoing), ZaVa (2012-2014) and Brave Beauties (2013-present), along with her more recent self-representative work, Somnyama Ngonyama (2015).
Javiera Luisana Cadiz Bedini was there to document the event for ART AFRICA. You will also be able to access this exclusive content in the November Digital Issue (FREE app download here for Apple and here for Android)! 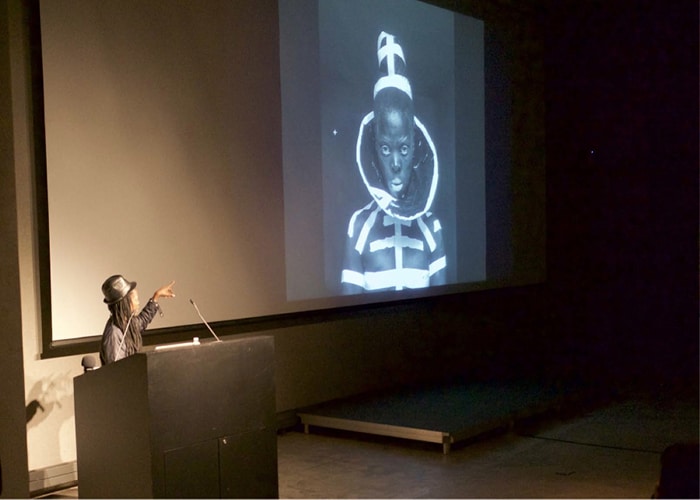 Zanele Muholi lecturing at Pratt. Photograph: John O’Toole. Courtesy of the Pratt Institute, New York.
When approaching the podium to begin, Muholi’s calm, friendly demeanour welcomes audiences into a familial space where compelling images, replete with socio-political significance, take centre-stage. Most of these illustrate her preference for analogue black and white photography. Muholi depicts a casual elegance and is an open book that shares intricately woven words that delineate biographical details evidencing her history as a human being who, as a lesbian, has devoted her life and work to, as she puts it, “push an agenda.” More specifically, she photographs, documents and archives the lives of the black LGBTI (lesbian, gay, bisexual, transgender and intersex) community as an immediate response to the violence and dehumanisation that they are subjected to.
This artistic agenda denotes her self-professed duty as an activist who ferociously stands against discrimination and the theft of human dignity signified through the ongoing attacks. The violence of which she speaks is not limited to South Africa, but extends through the cross-continental trajectories. Referencing the pressing need to build on the archive, Muholi squints her eyes and looks beyond the limelight and says, “If you don’t do it, nobody will do it for you.” In a way, this reverberates the plea in the title of a book by Sindiwe Magona, whom the artist greatly admires: Please, Take Photographs. 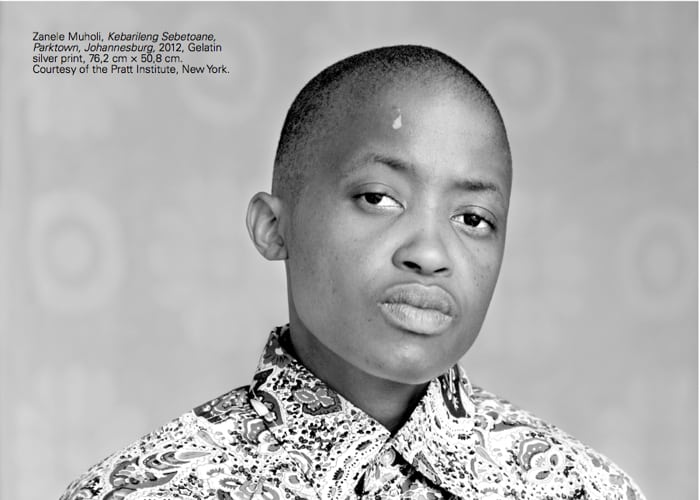 Zanele Muholi, Detail of Kebarileng Sebetoane, Parktown, Johannesburg, (2012). Gelatin silver print, 76.2 x 50.8cm. Courtesy of the Pratt Institute, New York.
To take these snapshots is not without difficulty. The images of funeral processions are painful to see and more painful to imagine. But Muholi extends her gaze to shoot the joy of gay life experienced in weddings and parties – within the intimacy of companionship, pleasure and pride. She states that the subjects of her pictures are not that, but rather, they are participants. Many of them appear in her photographs year after year because Muholi prefers to establish relationships with those whom she works. Muholi says that she wants to allow a person to speak for themselves, which is why participants choose what they wear, how they stand and how they want to be represented.
The artist recognises that there is a need to be seen and heard – to be written in history – which is why all of her photographs meticulously document names and surnames, as well as the location in which they are taken. What is obvious throughout her talk is that Muholi knows much more than just the names of the people she photographs. She knows fine details of their narratives, too. Essential to this process is Lerato Dumse, Muholi’s assistant, who accompanied her to the lecture. Dumse is a journalist and photographer in her own right who Muholi fondly refers to as her “left-handed right-hand woman.” For years now, the two have collaborated on building the archive by confronting the complexities and politics of race, gender and equality. 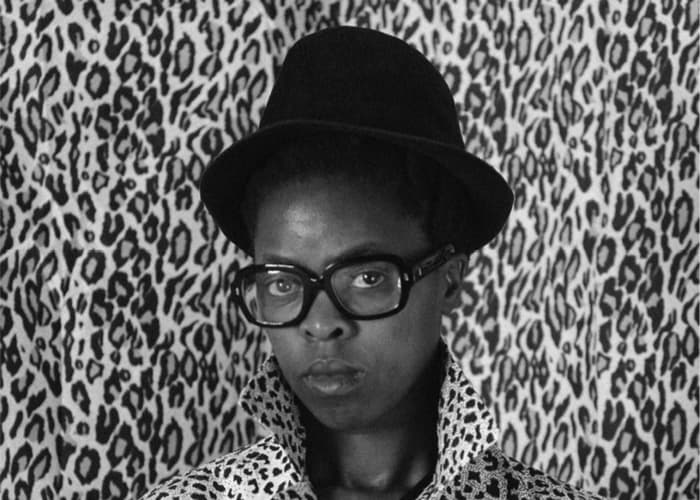 Zanele Muholi, Detail of Self Portrait, ND. Courtesy of the Pratt Institute, New York.
The camera in Somnyama Ngonyama, meaning ‘Hail, the Dark Lioness,’ turns away from her participants toward a self-conscious self-participation. Of this series, Muholi explains, “I look for me.” The body of work has performative elements that stage her wearing unusual domestic objects that play with diverse female archetypal figures. The self-portraiture is an artistic response to racism and comments on contemporary turmoil while also reminiscing on history. In Thulani II (2015) for example, Muholi appears as a miner echoing the Marikana massacre. Another, Bester I (2015), delivers an almost painful gaze of a woman who looks directly at her audience wearing pegs that serve as a broach, earrings and hair ornamentation. While appearing as a regal presence in a majestic upright position, Muholi pursues paradox by espousing domestic signifiers, as apparently elegant apparel. Her aesthetics: the contrast of texture, colour and form she adopts, are what makes the work beautiful, but more than that, they function as storytelling techniques. While looking for herself through self-portraiture, I realise that the ‘me’ she finds, is in fact a ‘me’ that is an all-encompassing term that interlaces the historic fabric of humanity within larger socio-political frameworks.
Hers has never been an obedient art that traces the already established. It is an art and a protest that pushes us to shout, to laugh and to cry. It forces us to gaze directly into the eyes of the participants in our lives, those now dormant, and those that might one day open their eyes, too. But beyond this close confrontation, Muholi urges us to direct the camera towards ourselves and ask: what is the portrait you choose to paint for yourself today?
Javiera Luisana Cadiz Bedini is an assistant curator, researcher and writer, born in Chile and raised in Argentina and South Africa. She obtained an MA in Art History, Performance and Literature from the University of Siena in Italy and holds postgraduate and undergraduate degrees in Art History and Drama from the University of Cape Town.
The Muholi talk was co-sponsored by Pratt Institute’s Fine Arts Department and Squarespace. Susan Meiselas, Stephen Shore, Catherine Opie, Rineke Dijkstra and LaToya Ruby Frazier are just a few of the esteemed artists who have delivered past Pratt Photography Lectures. ‘Zanele Muholi: Somnyama Ngonyama’ is on view at Yancey Richardson Gallery until 5 December 2015.